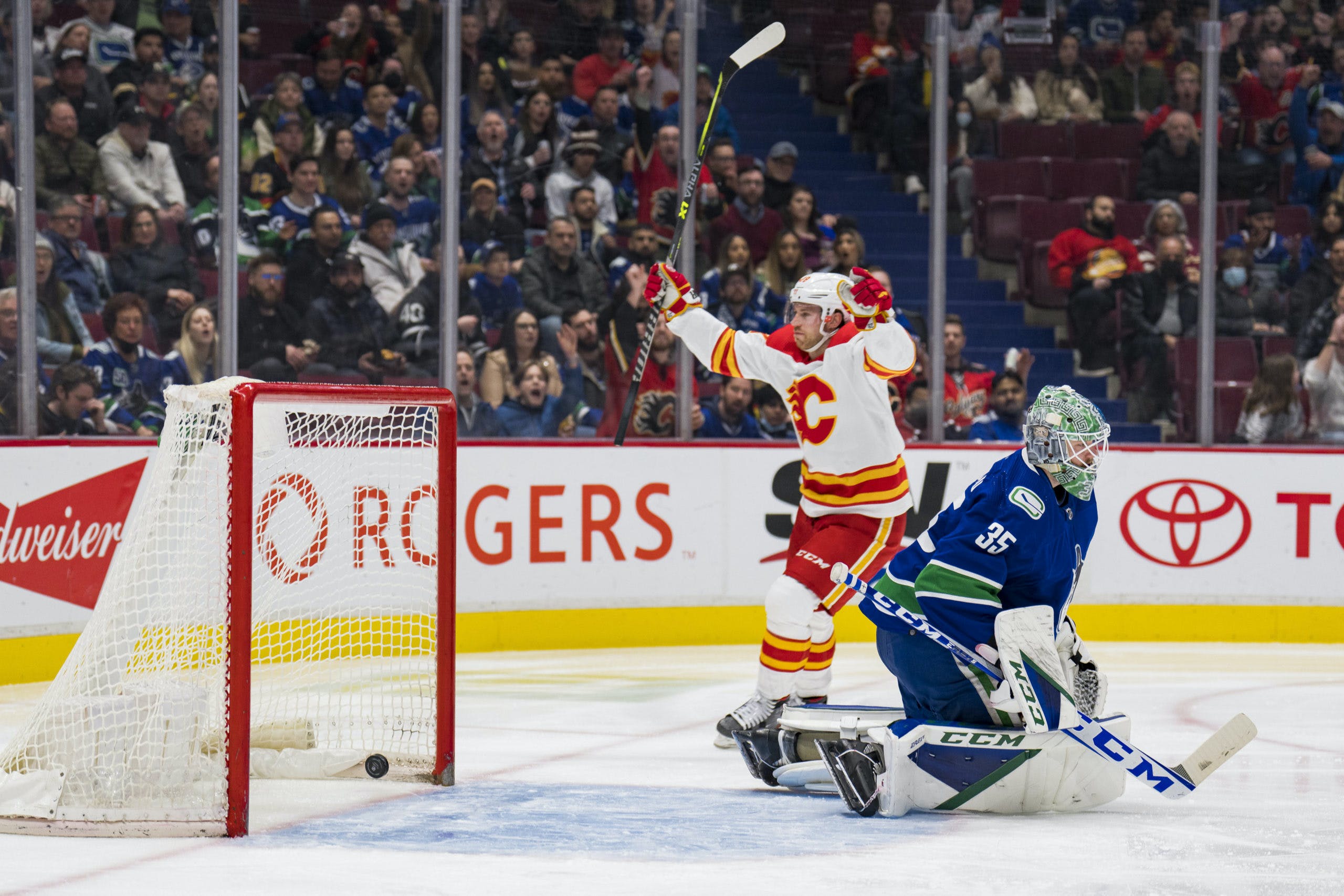 By Faber
8 months ago
After a tough loss on Thursday night, the Vancouver Canucks set their sights on the Calgary Flames in the first of back-to-back games on the weekend.
The Flames were on the second of back-to-backs with travel after falling in a 1-0 loss against the Buffalo Sabres. Both teams were looking for a bounce-back performance and that set up for an exciting Saturday night at Rogers Arena.
Nils Höglander remained out of the lineup but we did see some changes as head coach Bruce Boudreau moved Elias Pettersson to the wing to play with Bo Horvat and Conor Garland.

The goaltender battle saw Dan Vladar patrol the crease for Calgary while the Canucks sent Thatcher Demko between the pipes.
It was an uber-important two points for the Canucks and they were sending out their Saturday best.
The building was abuzz for the big game against the Pacific Division-leading Flames. It’s time for puck drop, so why don’t we head right into it!
Let’s go!

The Flames came out looking to make a statement after losing to the Sabres just one night prior. They had scoring chance after scoring chance and then broke through Demko just 4:45 into the period. Noah Hanifin came down the left wing and fired a shot that snuck through Demko to make it 1-0 Flames.
Shift after shift, the Flames continues to lay it on the Canucks and scored their second goal of the game with 12:14 remaining in the period. Matthew Tkachuk found open ice in the slot and ripped a wrist shot past Demko from in tight. 2-0 Flames.
The bleeding didn’t stop there after Rasmus Anderson walked in on the right wing and ripped a shot over Demko’s should and things were getting out of hand early. 3-0 Flames.
It was all Flames and the Canucks went 10 minutes without a shot in what was beginning to look like one of their worst periods of the season.
With five minutes remaining, the Flames led in the shot department by a count of 14-5. Boudreau was going to be busy at the intermission.
The play of the period for the Canucks came when Luke Schenn buried Tkachuk in front of Demko. Tkachuk threw some slashes towards Schenn as he stared down at the Flames assistant captain.

It was one of the worst periods of the season. The Canucks looked like they were stuck in molasses throughout the period and looked especially behind in their own zone. The Flames had a bevy of scoring chances from the slot and the Canucks were unable to keep them to the perimeter. There needed to be a much better effort in the second period as this one was coming off the rails quickly.

The Canucks had an excellent start to the period, they controlled the puck in the Flames’ zone for a solid three-minute shift and the Flames players looked extremely tired. The Canucks weren’t able to convert on their pressure but the Flames were.
At the end of the pressure sustained by the Canucks, Tyler Toffoli drove the puck up ice and put the puck on the stick of Elias Lindholm’s stick. Lindholm came down and ripped another puck past Demko. 4-0 Flames.
Demko allowed a few goals that he normally saves but the Flames were hitting corners while also getting so many strong chances from the slot. The Canucks’ defence was the problem through the first half of the game. They were a step slower and weren’t able to get sticks on sticks while defending.
Blake Coleman took a high-sticking penalty with 13:04 remaining in the period and the Canucks’ power play went to work for the first time.
The Canucks were unable to score and it was followed up by Schenn taking an interference penalty with 8:09 remaining in the period.
Two minutes passed and the Canucks killed off the penalty even though the Flames continued to have quality chances.

40 minutes passed by and the Canucks weren’t as bad in the second period but still we’re not good. The Flames had 29 shots on Demko while the Canucks only had 14 on Vladar.
There was a question on if Jaroslav Halak may take over for Demko in the third period. This just wasn’t a good game for the Canucks.

Halak replaced Demko in net to begin the period.
He held his own for six and a half minutes before the Flames extended their lead to five when on a Johnny Gaudreau goal. 5-0 Flames.
Head to the comments section if you want…
Or don’t!
Matthew Highmore got his stick on a puck around the crease and got the Canucks on the board. 5-1 Flames after the Highmore goal.
Things weren’t getting better for the Canucks after their first goal of the game. The Flames were outshooting the Canucks 39-20 with 5:55 remaining in the third period.
Erik Gudbranson tripped Tyler Motte on a breakaway and the Canucks went back to the power play with 2:53 remaining. They quickly scored a goal off the stick of Brock Boeser and just like that, the Canucks were working three.
Boeser set up in the crease and was first to the puck to bang it into the open cage. 5-2 Flames.
Seconds ticked away and the Canucks took a tough loss in a game where they were outplayed from start to finish.

There’s another game tomorrow but when losses are at a premium, the Canucks can’t have showings like they had on Saturday. The start was once again a problem and this is what captain Bo Horvat had to say.
“If I had the answer I don’t think we would be doing this night in and night out,” said Horvat.
It was a tough game for Canucks fans to watch and even worse for those who were keeping an eye on the standings.
The playoffs continue to get further and further away from this team who cannot afford to lose more than maybe five more games.
Sunday is another day and the Canucks are back in action to host the Sabres on a Sunday night matchup. Puck drop is 7 pm and we will see you there!
Uncategorized
Recent articles from Faber