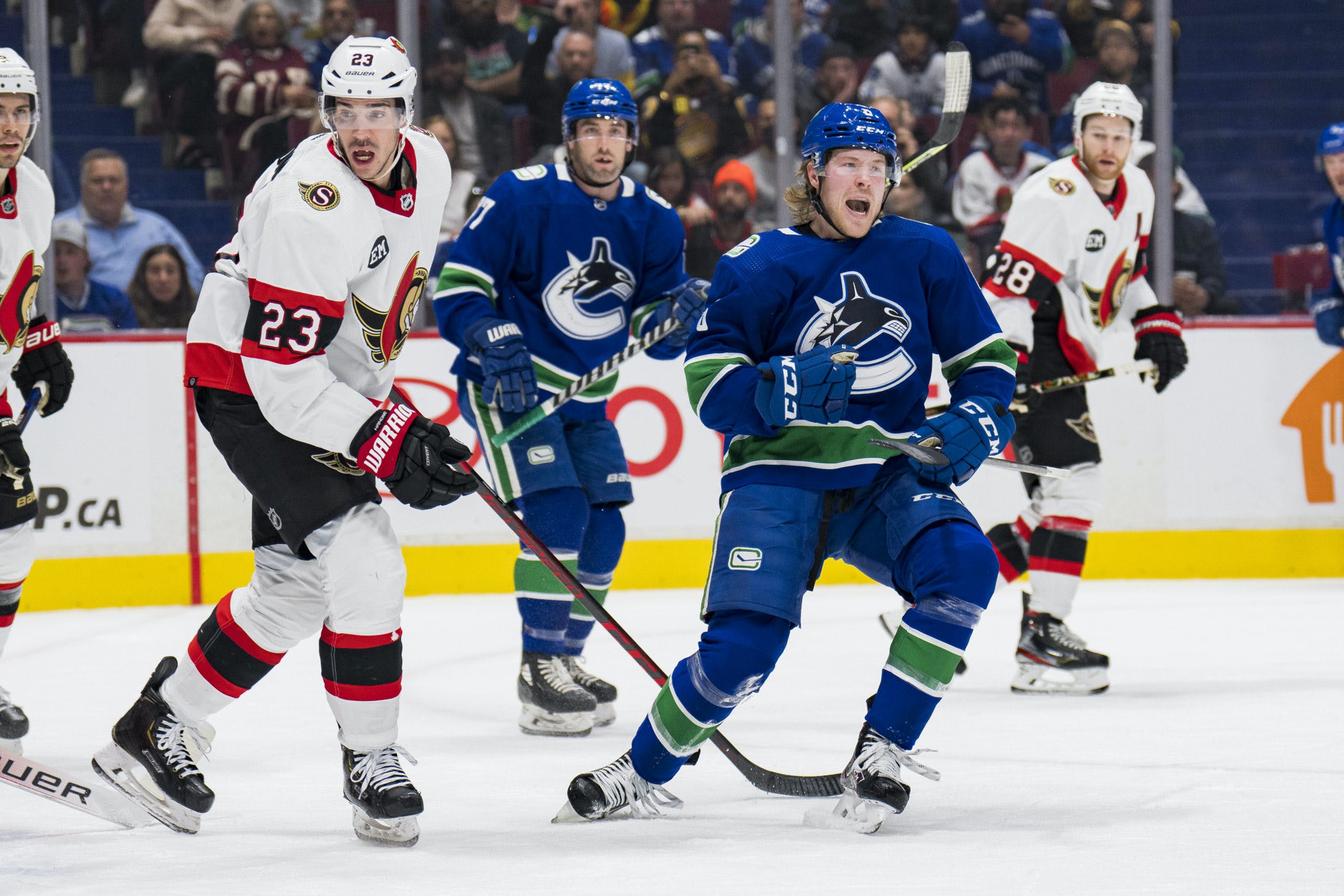 By David Quadrelli
9 months ago
The Vancouver Canucks got a point tonight.
The Ottawa Senators, and more precisely, Adam Gaudette, seriously hampered the Canucks’ postseason chances with their shootout win tonight.
Here’s what went down at Rogers Arena tonight.

But first: Confusion!
Head coach Bruce Boudreau shared that Jaroslav Halak would start this game to give Thatcher Demko a night off before the final stretch run, but at around 5 PM, the Canucks recalled goaltender Spencer Martin from the minors on an emergency basis.
Demko was on the ice for warmup, and would serve as the backup in this one.
The Canucks offered up this in terms of an explanation:
Alex Chiasson, who missed last night’s game after taking warmups and was a game-time decision tonight, did not suit up for this one.
Okay, now let’s do this!

The Canucks were given the first power play of the game when Gambrell hauled down Conor Garland, and had a golden opportunity to put their stamp on this game early on after going 0-2 Monday night against Dallas.
And put a stamp on it they did.
More specifically, J.T. Miller won the draw back to Quinn Hughes, took back a return feed, and wired home a wrister short side to open the scoring and make it 1-0 Canucks.
In the minutes that followed, the Senators made a pretty strong push to tie it up, but Jaroslav Halak was up to the challenge and looked sharp early on.
The Canucks were given another power play opportunity with roughly six minutes remaining, but this time couldn’t convert.
Well, they technically couldn’t convert on the power play.
Just as the penalty expired, Brad Hunt made a nifty move to find some open ice, and as if he were back dishing passes at Bill Copeland, slid the puck to Brock Boeser, who made no mistake in wiring it home. 2-0 Canucks.
Oliver Ekman-Larsson took a penalty late in the period, and the Canucks managed to kill it off to remain up by a couple going into period number two.

MORE CONFUSION!!!!
Jaroslav Halak was pulled and Thatcher Demko started the second period.
Bruce Boudreau said post game that Halak has an upper-body injury and that that was the reason for his departure from the game.
It took less than five minutes of sustained pressure for the Senators to beat Demko and tally their first goal of the game.
Formenton deflected a puck in front past Demko to make it 2-1 Canucks.
Juho Lammikko was hauled down by Artem Zub and the Canucks were given another opportunity to strike on the power play.
In terms of possession and dangerous-looking chances, the Canucks dominated on the power play and in the minutes that followed.
The Canucks had multiple grade-A chances but struggled to hit the net.
Despite out chancing the Senators by almost twice as much, the Canucks led by just two in total shots.
The Canucks were awarded their fourth power play of the game with just over two minutes remaining in the period, and after the Canucks’ power play failed to solve Gustavsson for the duration of the two minutes, J.T. Miller slammed his stick in frustration.
The Canucks didn’t score a goal in the period, but truly, they were dominating the Senators, and likely should have been up by more than just one heading into the third.

This game was quickly tied at two after the Sens came out firing to begin the third and final frame.
Parker Kelly buried a loose puck in front of Demko to make it 2-2.
Things went from bad to worse for the Canucks after Alex Formenton moved past the defence and got in alone on Demko before snapping a shot blocker-side on the Vancouver goaltender to make it 3-2 Senators.
This start to the third period was less than ideal for a Canucks team that knows they’re going to have to scratch and claw their way
Then Vasily Podkolzin and Josh Norris were assessed offsetting minor penalties for roughing, giving us some 4-on-4 action.
At 4-on-4, Brock Boeser set up Travis Dermott to score his first goal as a Canuck, and it was a big one.
3-3.
Folks, this one, somehow, someway, needed overtime to be solved.

After a costly turnover in the neutral zone by Brady Tkachuk, the Canucks got possession and went to work.
Elias Pettersson had a grade-A look, followed by a 2-on-1 chance with Brock Boeser, but couldn’t make either work.
From the moment the Senators turned over the puck, the Canucks held onto it and refused to give it up.
That wasn’t enough, however, as this one required a shootout.

Boeser made a move to the backhand and was stopped.
Tim Stützle attempted to go five-hole on Demko but the Canucks’ netminder shut the door.
J.T. Miller played the long game and scored on the backhand.
Josh Norris missed the net on Demko’s blocker side.
Elias Pettersson didn’t get the chance he wanted off on Gustavsson.
Drake Batherson scored to give this shootout a fourth round.
Conor Garland was stopped by the glove of Filip Gustavsson.
Brady Tkachuk, with a chance to win it, was stopped by Demko.
Nic Petan didn’t score.
Adam Gaudette, to a chorus of boos, scored to win it for the Senators.
4-3 Ottawa final. 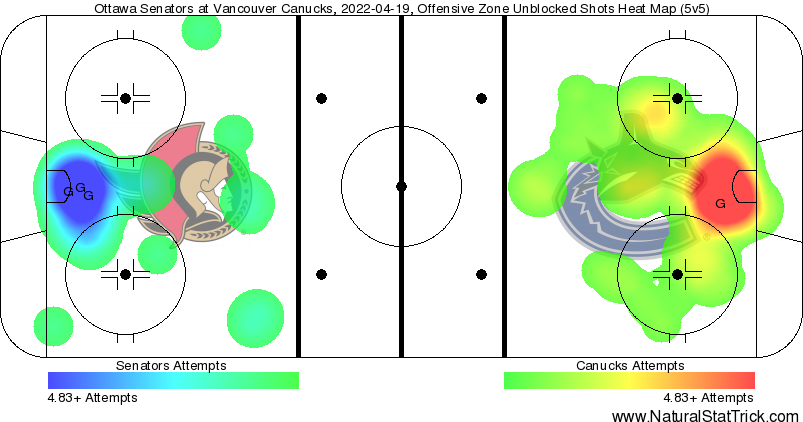 The Canucks’ playoff chances took a serious hit tonight, courtesy of Adam Gaudette.
The Canucks still picked up a point, but didn’t get any help on the out-of-town scoreboard tonight, as the Los Angeles Kings won in regulation against the Anaheim Ducks.
It’s certainly not over, but to not pick up two points tonight — against the Senators of all teams — is sure to cause the fanbases’ hopes to fade.
The Canucks will be back in action on Thursday when they visit the Minnesota Wild.
Uncategorized
Recent articles from David Quadrelli