CanucksArmy post game: Another day, another loss, this time to the Blue Jackets 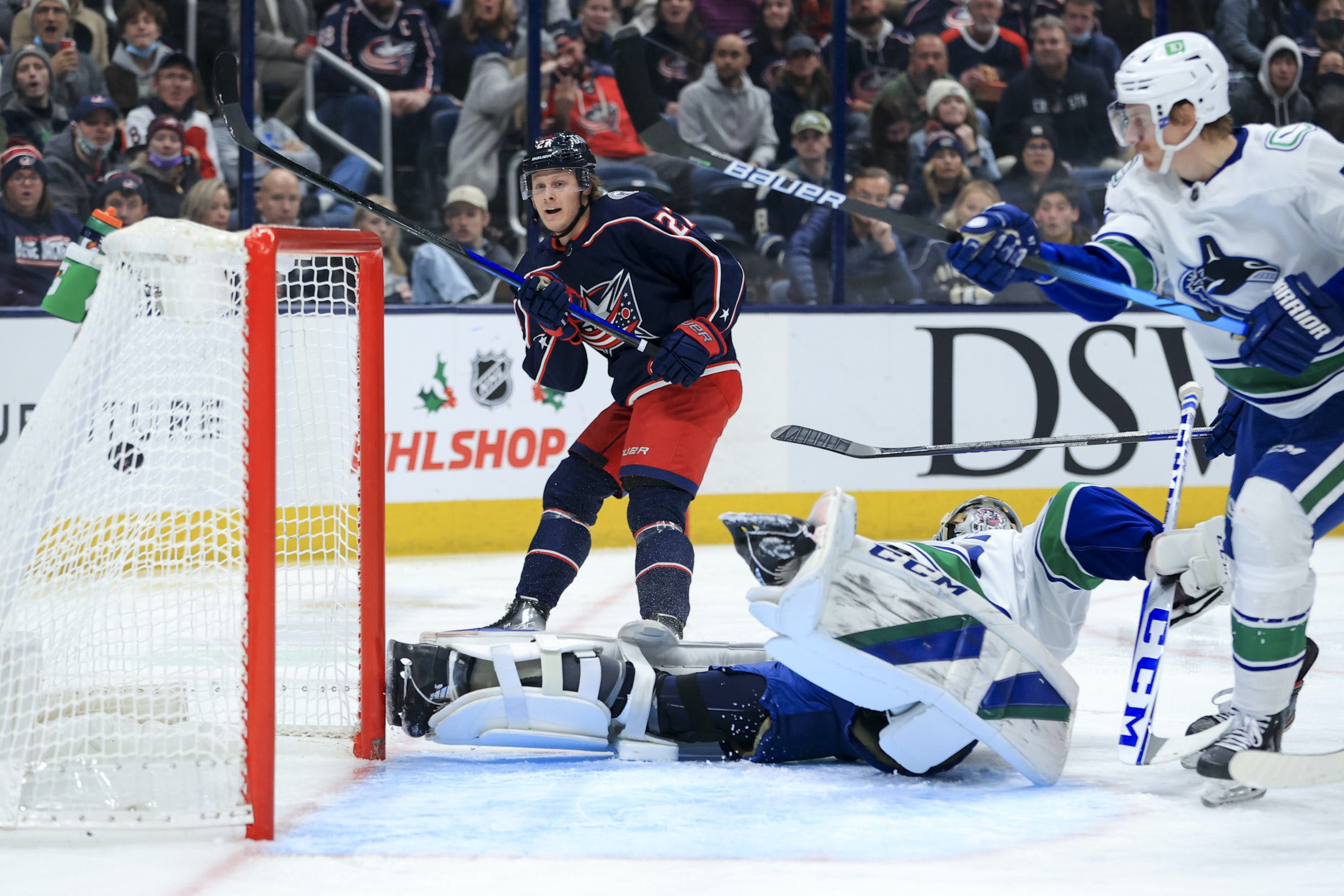 By Faber
1 year ago
Here we are again, breaking down another meaningful game when it comes to the job status of the Vancouver Canucks’ coaching staff and management group.
The Canucks travelled into Columbus to face the red hot Blue Jackets.
There’s not really an interesting tidbit or stat for me to bring up here in the preamble of the post game report. The Canucks have been outscored 30-12 over their last seven games. They have a 1-6-0 record in that stretch.

The lines saw a shake-up and we will definitely monitor if any of them have success.
Thatcher Demko was between the pipes for the Canucks while Elvis Merzlikins cut up the blue paint for the Blue Jackets.
It’s time for some Friday night action.
Let’s go!

Well, it didn’t take long for the Blue Jackets to get on the board. It also took about the same time to have it taken away. The Jackets scored less than a minute into the game but the Canucks challenged the goal for offside and won the challenge.
After the reversed goal, the Canucks had consistent control in the offensive zone for about four minutes, giving them an early 5-0 lead in the shot department.
Justin Dowling took the first penalty of the game. For those who forgot, Dowling is on the Canucks. He was charged for tripping with 12:10 remaining in the period.
The Canucks were able to kill off their first penalty of the game and didn’t allow a shot during the two minutes.
After killing the penalty, they really took control of the pace. It was the first time in a few games where the Canucks looked like they were a step up on the competition. Their stretch of good play at even-strength ended when Nils Höglander and Oliver Ekman-Larsson made Zach Werenski draw a penalty after the whistle.
Things were looking fine on the power play until Tanner Pearson made a wonderful breakout pass to Gustav Nyquist, who went down on a breakaway and beat Demko while shorthanded. 1-0 Blue Jackets.
The Jackets then killed off the final bit of the penalty and we were back to even-strength.
It looked like the Jackets were going to escape the period with a lead until the final minute. The Canucks forced a turnover that led to Vasily Podkolzin ripping a wicked wrist shot over Merzlikins’ shoulder and making it a tie game. 1-1 after Podkolzin goal.
After 20 minutes, the Canucks were controlling a massive amount of the play and escaped with a tie game.

The Canucks were excellent at even-strength in the period. They had 12 scoring chances for and only one against. Unfortunately, they had a horrible giveaway from Pearson that led to a shorthanded goal against.
Though the Canucks had the analytics of a dominant period, it only felt like that for portions of the period. The Canucks controlled 80% of the Corsi in the period but didn’t pull ahead on the scoreboard.
The Canucks had to keep the pressure going, otherwise this game could slip away real quick. There was something about the Jackets that felt like they were going to be able to score a bunch of goals on Friday evening.

The period began with the Canucks having a two-minute stretch in the Blue Jackets’ zone. The Canucks’ forward lines were able to change and get fresh bodies against the tired competition. They had a couple of half-decent chances while controlling the puck in the offensive zone.
There was just a feeling that the Jackets were going to find goals easily tonight. They did exactly that when they trailed in shots by a count of 16-7 but were able to get a goal from Adam Boqvist. He found a loose puck on Demko’s left side and roofed it into a yawning cage. 2-1 Jackets.
It was time for another Canucks power play as the Jackets took a delay of game penalty at the midway point of the period.
Merzlikins was facing a lot of low danger shots and he was good through the first half of the game. He was coming off a shutout against the Winnipeg Jets prior to this match against the Canucks.
It took a great play in front of the net to beat Merzlikins. Hughes fired a shot from the point that would have missed the net but Tyler Motte was there and made a very pretty deflection to even up the score late for the second period in a row. 2-2 after the Motte goal.
Demko made a big save coming from right to left on Alex Texier at the other end of the ice to keep the game tied.
That was it for the second period and we went into the second intermission with a 2-2 tie.

The Canucks definitely had control of the possession in this game but the Blue Jackets still felt like a more dangerous team when they had the puck.
The attempted shots were nowhere near close even though the score was. The Canucks attempted 48 shots in the first 40 minutes compared to the Blue Jackets’ 16. 2-2 obviously isn’t where the Canucks want to be with how much possession they are having and needed to come through with some goals in the final frame.

The Canucks fired their 30th shot on net at the time that the Blue Jackets had only 10 shots on net. The Blue Jackets still felt like they were the more dangerous team despite being outshot by a three-to-one rate.
Podkolzin had a great scoring chance four minutes into the penalty that saw Merzlikins scrambling around in the crease before diving to right and keeping the puck out of the net.
The Blue Jackets got their third lead of the game with 13:56 remaining in the period. They had strong pressure in the offensive zone before Jack Roslovic fired a screened shot past Demko. 3-2 Blue Jackets.
It was another flat third period for the Canucks as they were able to get shots on net but not generate much for real, high quality scoring chances.
There was good but not great goaltending from Merzlikins, who saw a lot of shots but not a lot of danger. The Canucks were simply not good enough again.
Max Domi found the empty net once the Canucks pulled their goalie. 4-2 Jackets.
Final.

Vasily Podkolzin played an excellent game and felt like he spent the whole game in the Blue Jackets’ zone. He played 15:13, had a 84% Corsi for percentage and had the first Canucks’ goal of the game.

They can’t bank their morale victories anymore and getting a lot of shots on net doesn’t mean anything anymore.
As the losses pile up, we have come to a point where change is the only option.
The Canucks are 3-11-1 in their last 15 games.
Like seriously, what are we even doing here?
Hope is no more. Change is necessary.
Uncategorized
Recent articles from Faber