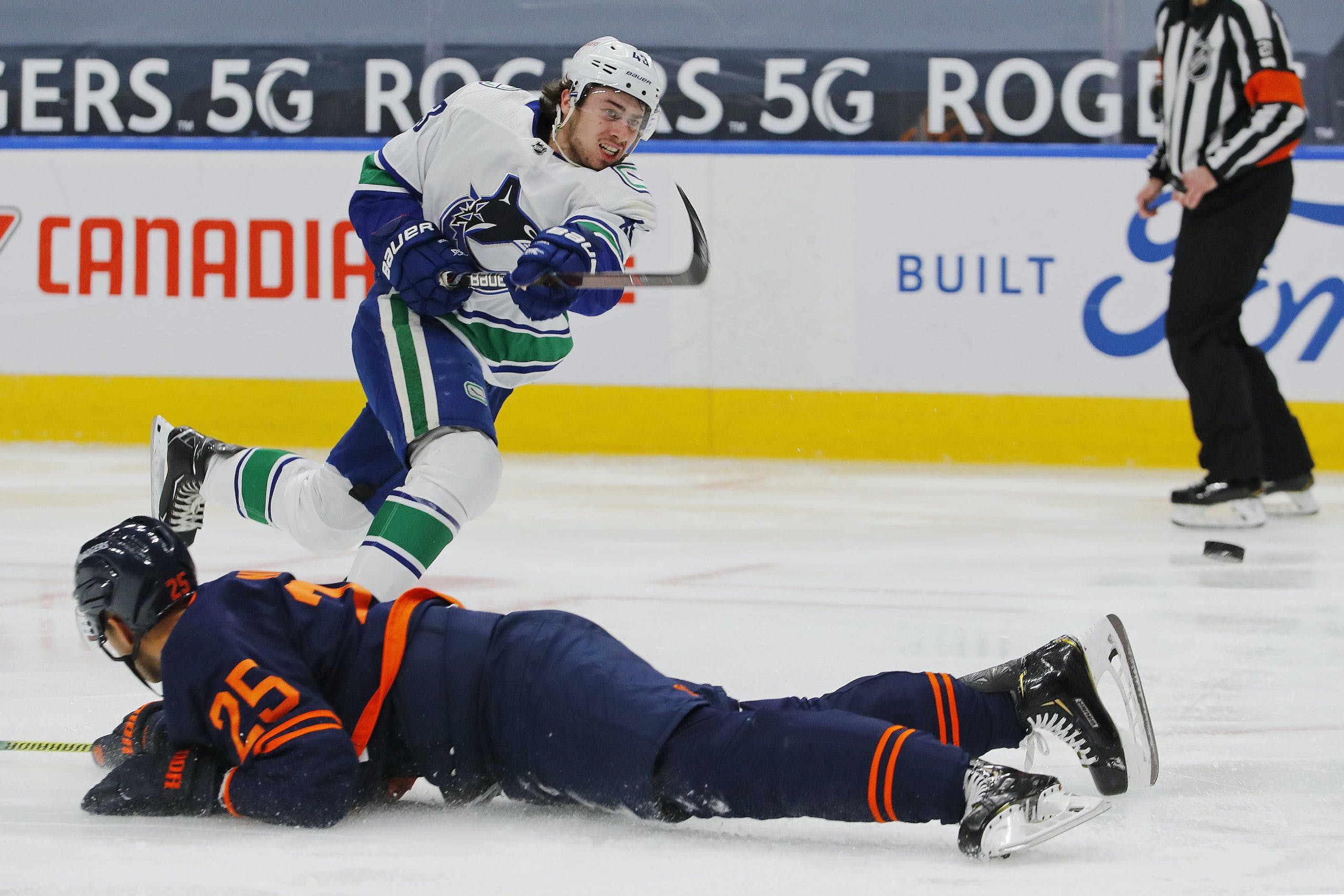 LISTEN UP, IT’S A GAME DAY

The Vancouver Canucks are approaching da funk again and no, it’s not the epic 90’s track by Daft Punk but eerily similar in style. For five games the Canucks have dragged us around like a dog that clearly does not want to go for a walk but that leash is attached so we’re going anyway.
Now, like the epic song “Da Funk”, the Canucks are just repeating the same chronic beat looping it over and over and over again with no chorus in sight. That brings us to the moral victories, the inability to finish games with more goals than their opponents, and an anemic power play that even a 10-year old could figure out.
The Edmonton Oilers arrive in Vancouver after a complete dismantling of Jacob Markstrom and the Calgary Flames. It was so bad that Marky is day-to-day but we know what’s up ;).
Connor McDavid will look to continue his feast of the North Division presented by Scotia and add to his 37-points of fury. Brock Boeser is the only Canuck even close with 22 points. There’s some ground to make up there.
Oh right.
Let’s Do This!™

You don’t come here for lineup information so unless there is something important to talk about, head on over to our good friends at Dailyfaceoff.com for the latest. I mean, hey, you have social media. You’ll probably know before me anyway.

I don’t care how much they trot out that PP1, it can’t be a man-advantage when you only utilize three of the five guys on the ice. Win the faceoff, get it back to J.T. Miller, pass to Quinn Hughes, over to Elias Pettersson for the eventual clapper attempt. Wash, rinse, repeat.
This has been the Canucks’ feeble attempt at a dynamic PP for the past season and the only time it started to work was when they used all five players on the ice. Brock Boeser is wasting away at the bumper spot and Bo Horvat essentially sits in front of the net and skates in a small circle. It’s beyond predictable and it needs to stop. No one has called them out and their 17.1% conversion rate is telling.
The quick pass from Bo to Brock has resulted in a handful of goals and is one of a handful of options they have but if the goal is to try and let Pettersson unleash a bomb, I’m sorry, but it isn’t going to work most of the time.
Nothing needs to change position-wise but it’s awfully boring to see wasted attempt after wasted attempt. We deserve better and so do they.

Making it rain in the Corsi department doesn’t equate to wins unless you’re the rest of the NHL. Below are the last three games the Canucks have played. Shot share handily in their favour. The results? OTL, L (Shutout), Win. Vancouver may have possessed the puck but their shots didn’t tell the whole story. Looking at the last two, man, how did they lose those?

I’m excited for this game, I really am. I’m excited about every Canucks game but if they aren’t going to look any different where it matters, yes the power play again, then it gets frustrating to breathe hope. I’m looking forward to continuing Breaking Bad as I just started Season one and WHOA BOY! It’s a banger!
I’m also looking forward to seeing a win in the Яeverse Яetros. It’s laughable that they have continued the tradition of having a good team muddy up a result as soon as they drape the fancy clothes. Buck the trend.

Who Wields The Nintendo PowerGlove™ tonight?