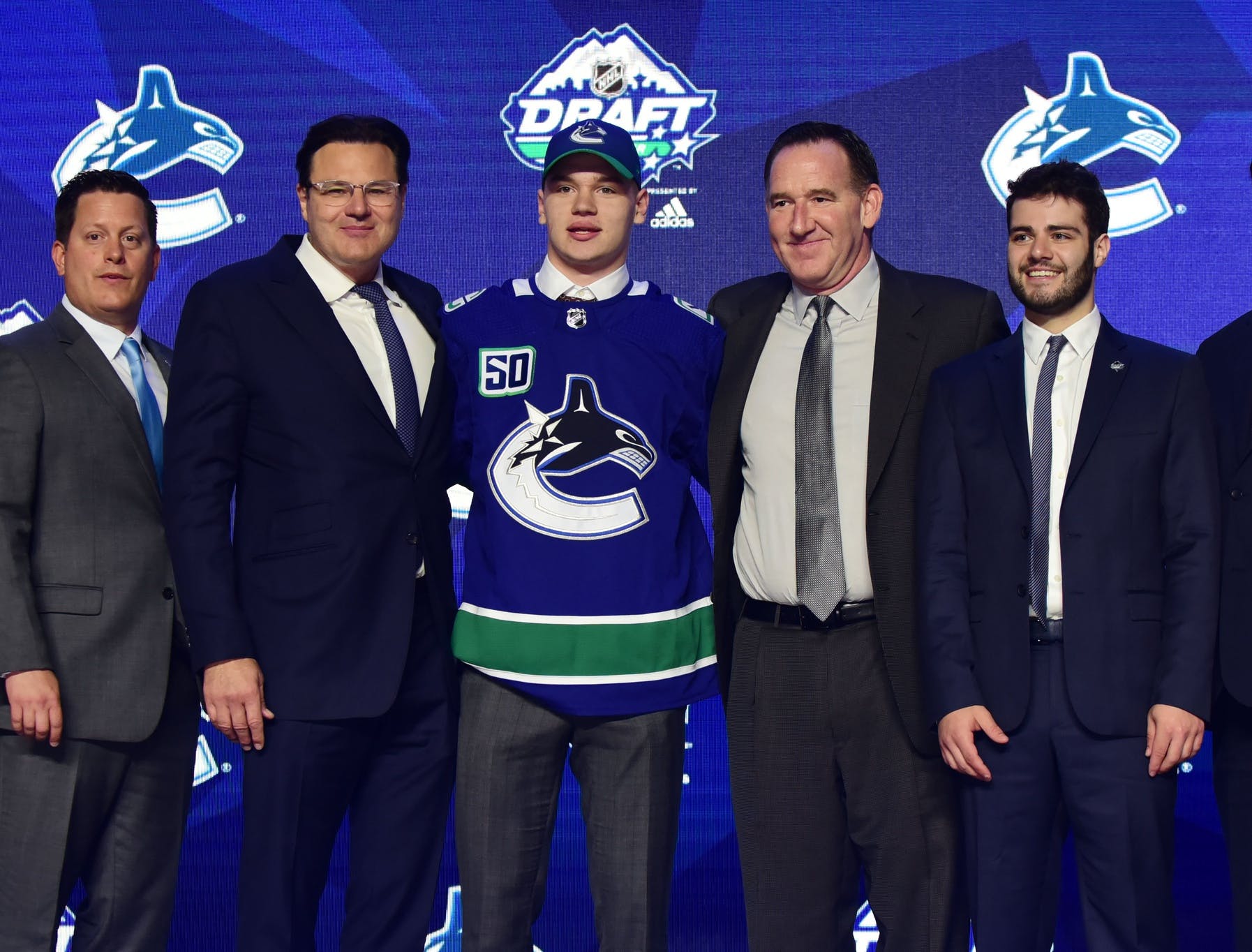 By Faber
1 year ago
You guessed it, I’m back with some more Vasily Podkolzin updates.
Things are truly beginning to turn around for the Vancouver Canucks’ top prospect.
He is now getting time with the power play and penalty kill units while simultaneously watching his ice time rise. Over the past four KHL games, Podkolzin is averaging 16:13 of ice time. Over those four games, he has totalled up 12 shots on goal, a goal and an assist and thrown six hits. He has also been a beast on the possession numbers over the past four games. As per my Corsi tracking, SKA is controlling 63.3% of shot attempts with Podkolzin on the ice.
His tenacious attack without the puck is finally beginning to show on the scoresheet. Podkolzin’s work rate is unmatched on SKA and that type of player is exactly what the Canucks need right now. One of the interesting things that I’ve been noticing this year with Podkolzin is his awareness of the blue line in the defensive zone.
This season he has done an amazing job of just getting the puck over the blue line to make the opposition reset their offensive attack. Whether it’s carrying the puck, passing it or simply pushing the opposition over the line with his strength, he is doing a great job of limiting possession in his own zone.
On Sunday, Podkolzin stole a puck from his opponent in the offensive zone and ripped a wrist shot past the goaltender for his fifth goal of the season.
The kid has been hot lately, he has five points over his past seven games and his playmaking has been on full display. His linemates have been being swapped around over the past two weeks, but it doesn’t matter. The way that this kid thinks the game seems to create immediate chemistry with any linemates he’s put with.
He is able to make the correct breakout pass from the defensive zone and is able to make cross-crease passes in the offensive zone. The most exciting thing about his playmaking is the skill that he shows through the neutral zone. It’s a major reason why he has such a high control of possession and shot share.
Here’s an example of a beautiful neutral zone saucer pass to set up a goal.
Things are just feeling right for Podkolzin right now. He is being used late in games instead of being benched like he was earlier in the season. With the addition to the special teams units, it feels like the tight leash has been loosened on him and his coach is putting him into spots where he can succeed. I am saying this while Podkolzin still gets sent onto the fourth line, so it’s not the best situation for development, but the situation as a whole has definitely improved as the year has gone on.
If he continues to get 14-18 minutes of ice time, his skill will continue to show. He has not had a power play goal yet this season but game-by-game he is getting the puck more on the power play unit.
There are a few things that Podkolzin will do at the NHL level. Those things will get him by and if he ups his game with NHL linemates like we have seen Nils Hoglander do–then this kid should be able to hop right into the Canucks’ top-six forward group.
With playoffs set to begin in less than a month, the countdown is on for the Podkolzin arrival news to drop, and all eyes should be on the World Championships and SKA’s playoff run. SKA has been a good team in the KHL this season, but they have lost games to weak teams.
Their playoff march might not be as much of a cakewalk as we believed it would be at the start of the season. They have shakey goaltending, a weak defence core but have more than enough talent to outscore many teams in the KHL.
Within the next six to eight weeks, we should know the arrival date for Podkolzin in Vancouver. He is currently on an international assignment to play in the Swedish Games tournament until his KHL season resumes on February 16th. That also means that there are only six more regular-season games for Podkolzin.
So yeah, the countdown is on folks!
For now, I’ll keep waking up at 6 am to watch this teenager take over the pace of play during his 14-18 minutes of ice time.
Uncategorized
Recent articles from Faber