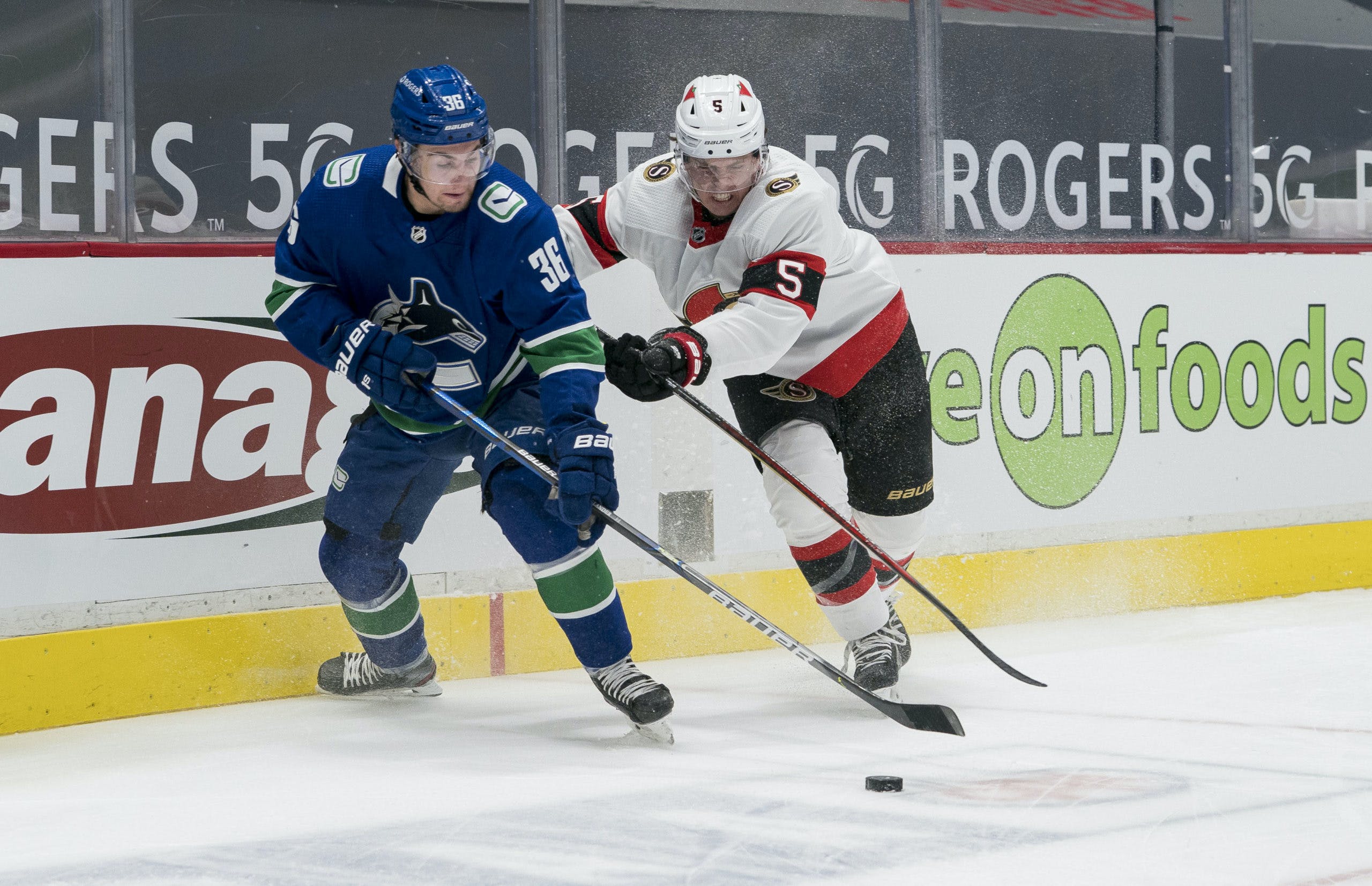 By David Quadrelli
1 year ago
Nils Hoglander has absolutely burst onto the scene in Vancouver and fans are quickly becoming accustomed to him having an impact on games night in and night out.
Whether that’s by bursting down the wing or prolonging the Canucks’ offensive zone time by being an absolute hound on loose pucks, Hoglander has been more than impressive.
The Swedish winger was given a shot on Bo Horvat’s wing on the first day of training camp and hasn’t looked back since. He’s surprised many, but perhaps no one more than Canucks’ head coach Travis Green with his commitment to all areas of the game.
“He’s a good player. He works extremely hard, not afraid to go to hard places. With young guys that have skill, that’s sometimes the part you have to wait for,” said Green. “He’s jumped right in.”
Everybody knew how good Hoglander could be with the puck on his stick, but nobody knew how hard he’d work to make it happen.
Canucks fans have seen just about everything they’d want to see from Hoglander 13 games into his NHL career.
One thing they haven’t seen, however, is Hoglander attempt to pull off the lacrosse-style goal — AKA, “the Michigan” — but more on that later.
Enter the Canucks’ power play, which currently ranks dead last in the North Division.
Tuesday night against Montreal, fans got to see first hand what can happen when Elias Pettersson is given time and space to pick his spot while on the power play.
The issue is, the book has long been out on what Pettersson can do, which is why he is rarely given this much time to pick his spot.
But if the team were to move Hoglander onto the first unit, they could open up entirely new avenues for attack.
Having Hoglander behind the net or on the side wall makes the most sense because of his excellent playmaking ability and excellent puck retrieval skills.
The Canucks seem to be set on having Boeser behind the net — and to be fair, he’s looked fine in that spot — but moving Boeser to the wing in J.T. Miller’s current spot and Hoglander behind the goal line as a distributor could provide the Canucks with the spark they need.
Hoglander’s high hockey IQ and ability to make sneaky tape-to-tape passes in the blink of an eye while keeping his head up means the Canucks’ power play will be much less predictable. With Boeser and Pettersson both open on the wings, Hoglander’s stickhandling ability and deceptiveness could provide them with the time and space they need to let go of their world-class wrist shots.
Oh, and don’t forget the aforementioned lacrosse-style goal, which makes him even more intriguing to see in this position. Teams would have to respect that Hoglander can pull off the move quicker than anyone, as we’ve seen in every other league he’s played in.
He can even pull the move off under pressure:
And once teams knew he was capable of it, he started to use it as a feint to keep defenders on their toes:
He’s an incredibly creative player and putting him behind the net unlocks a whole world of possibilities with the man advantage.
Stuff you didn’t even think was imaginable, such as this move:
Could you imagine the result if this were a planned play and the Canucks’ forwards all crashed the net looking for the loose puck while the opposition still tries to figure out what they just witnessed?
Harman Dayal of The Athletic shared Corey Sznajder’s manually tracked league-wide shot assist data in a recent article, and the results may come as a surprise to you. You know what the majority of the players on this list have in common? They play on their team’s first power play unit.
For those wondering what a primary assist is, Dayal explains it as follows:

“Just like a ‘primary assist’ refers to a pass that directly leads to a goal, a ‘primary shot assist’ is tracked when a player makes a pass that directly leads to a shot. Much like we use a sniper’s shot rate to determine how many chances they’re getting, we can use a playmaker’s shot assists to see how many chances they’re setting up. In the long run, shot assists are really useful at helping predict actual assists. In Hoglander’s case, he’s in elite territory this year at finding his teammates in the offensive zone at 5-on-5.”
-Harman Dayal, The Athletic

Hoglander is an elite puck distributor and doesn’t necessarily have to be put into this position on the first unit to find success, either. If the Canucks wanted to, they could experiment with him in this spot on the second unit before making the decision to move him to the first unit.
It’s clear Hoglander is a player whose offensive abilities and unique skill set would allow the Canucks to give their stagnant power play a fresh new look.
Uncategorized
Recent articles from David Quadrelli