Canucks: Travis Hamonic returns to game-action in Abbotsford, here’s how it went 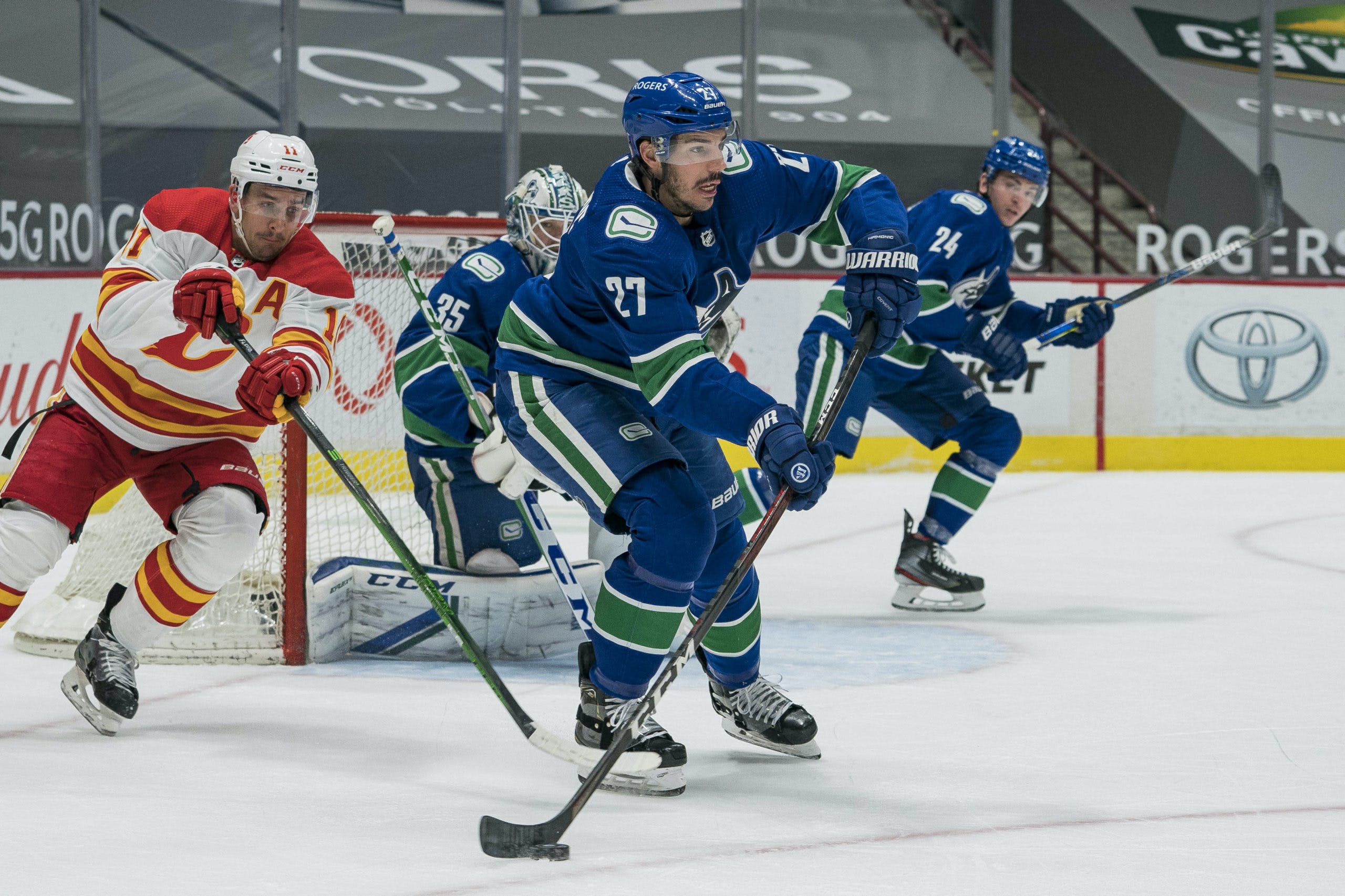 By Faber
1 year ago
Defenceman Travis Hamonic returned to game-action on Saturday night with the Abbotsford Canucks.
Hamonic did not travel with the NHL team on a trip that began in the United States and finished in Ottawa and Montreal.
This comes after being called up and sent down in the span of seven and a half hours. 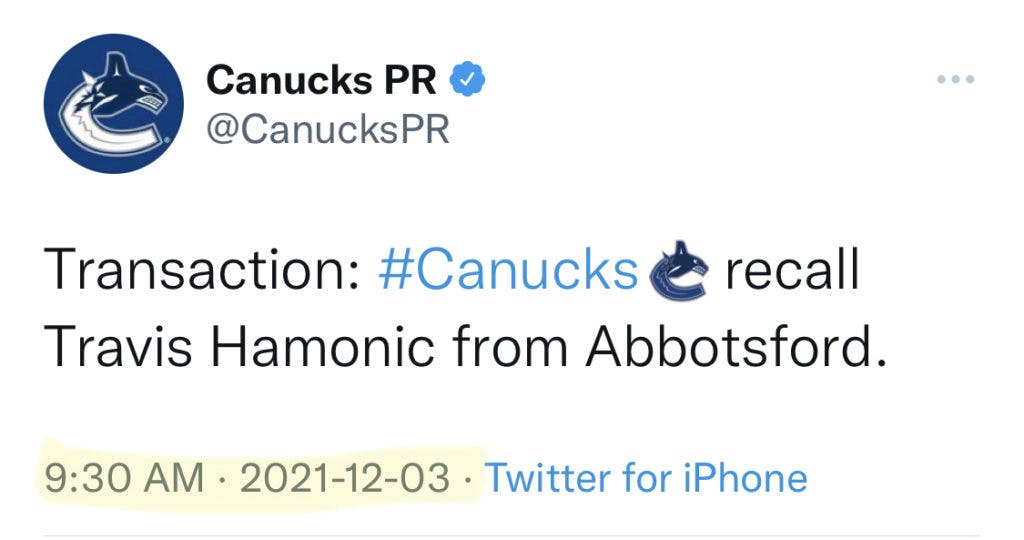 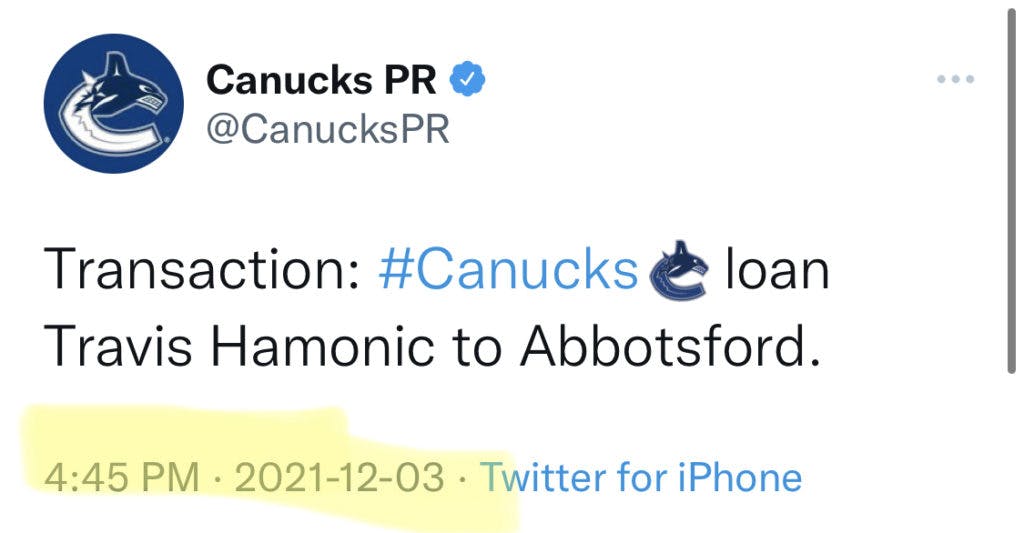 As he returned to play, it seemed like the organization wanted to get somewhat of a conditioning stint in the AHL before Hamonic went back to the NHL roster.
Hamonic played a lot of minutes in Saturday night’s game. He was paired alongside Noah Juulsen for the night and played the left side instead of his usual spot on the right side. Having Hamonic play the left side posed the question of if he was going to potentially play alongside Tucker Poolman on Vancouver’s third pairing in the near future.
Abbotsford Canucks’ head coach Trent Cull was asked if playing Hamonic on the left side was guidance that came from the organization.
“No, nothing to do with that,” said Cull. “That was just a spot that we had open. That’s where he fell.”
Hamonic took two minor penalties in the game and was a minus-two on the night. He took a holding penalty 6:53 into the game in which the Barracuda scored on. Then, 10:37 into the second period, 20-year-old Barracuda forward Adam Raska took a run at Hamonic.

He narrowly avoided the big collision and dropped the gloves to fight Raska, who dropped to the ice quicker than the Rogers Arena DJ drops music when a fire Benning chant is happening during a break in play. Hamonic ended up getting a two-minute roughing penalty and the Barracuda scored another quick power play goal.
Late in the game, Hamonic was on the ice for a goal against when a shot hit him in the arm and directly onto the stick of Joachim Blichfeld who wired home the game-winning goal.
Aside from the two penalties and being on the ice for the game-winning goal against, Hamonic looked fine against AHL competition. He looked like a player who hadn’t been in a game for two weeks.
It likely was a good call to get Hamonic into the AHL first before throwing him into the fire of the NHL heat. He played a lot of minutes on Saturday night and took a step towards being back in the NHL.
We will wait and see if Hamonic laces up the skates for the Abbotsford Canucks on Sunday or if one conditioning game in the AHL was enough to have him draw back into the NHL lineup for their game on Monday.
Vancouver Canucks’ head coach Travis Green confirmed that Hamonic is fully vaccinated and has completed the required time to be obtain the status of fully vaccinated under the league’s protocol.
He will now be able to travel into the United States to play games with either of the AHL or NHL teams.
Hamonic was requested for postgame media access following the Abbotsford Canucks’ game but our requests were denied.
We will follow the story and see if he will play in Abbotsford for their Sunday match against the Barracuda or if he will be recalled to Vancouver and join them for their game on Monday.
Uncategorized
Recent articles from Faber