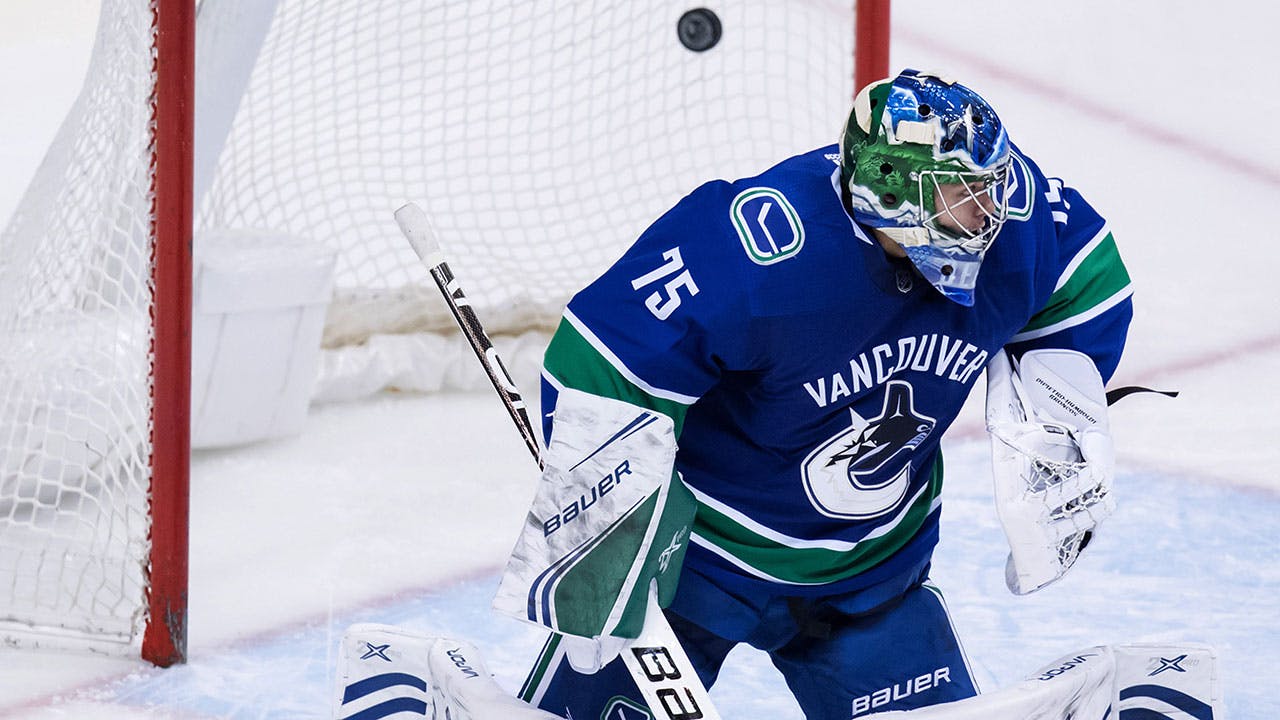 By David Quadrelli
1 year ago
Michael DiPietro has been the victim of an unfortunate situation this season.
The 21-year-old netminder took massive strides in Utica last season, and took over the starter’s role in a hurry — something that’s not easy to do for most goaltenders coming out of junior.
“The American Hockey League is an extremely difficult league to transition to from junior from NCAA, it’s a really tough League,” said Comets goaltending coach Curtis Sanford. “So what he was able to do last year to transition from the OHL into a strong training camp, and then parlay that into a strong start to the AHL season which carried through until we were told to stop playing last year, it was really impressive.”
This season, however, DiPietro hasn’t been able to build off the progress he made last season.
He’s been stuck on the Canucks’ taxi squad since the start of training camp and hasn’t seen game action in over 400 days. That being said, DiPietro has gotten valuable time to work with Canucks’ goaltending coach Ian Clark, but it’s extremely important that he’s given a chance to apply the new techniques he’s learned in actual games.
Now, it appears as though he’ll get into some games with the Comets:
It took a while, mainly because the Canucks reportedly didn’t want to shell out extra cash for a third-string goaltender to sit on the taxi squad, but also because they were hoping Arturs Silovs would get a chance to play in Manitoba when they loaned him to the Moose.
Silovs got into just one game with the Moose, and now gets an opportunity to work with Clark once again. DiPietro is much further along in his development path than Silovs is. Getting time with Clark right now greatly benefits Silovs more than it does DiPietro.
Silovs has a lot of raw talent and is someone the Canucks are very high on internally.
“I think his raw assets — his athleticism, his competitiveness — he’s an extremely smart hockey player, he understands the position really well,” said Curtis Sanford when asked what Silovs’ greatest strengths are. “I think it comes down to gaining that experience over on North American ice, and just kind of learning how to rein in your game. We don’t necessarily want to completely control what these guys are doing because they have such great instincts and athleticism. You always want to coach to their strengths. It’s not completely black and white, there’s a lot of gray area that we like to live in as well and let these goalies explore themselves. A lot of it comes down to just gaining that experience over on North American soil, learning how the game is played, learning how to make reads within the arena dimensions, and then just kind of letting your instincts and athleticism take over at that point.”
Silovs needs a lot of work before he’s “NHL ready”, but he’s loved working with Clark every chance he’s gotten to.
“I’ve never had a coach like Ian before so it’s been a good experience for me. It’s more about just improving my movement, my skill in total, and just to become a better goalie,” said Silovs back in March.
Like DiPietro, Silovs is on a two-way entry-level contract, meaning he costs roughly 300-700 thousand less than if the Canucks went out and signed a veteran third-string goaltender.
Having him on the taxi squad gave the Canucks the flexibility to send DiPietro down to get some games in.
And don’t worry about DiPietro going down to Utica and being taught things different than what Clark was preaching in Vancouver.
“The one thing that we do really well is Curtis is an extension of Clarky,” said Jake Kielly. “He doesn’t mix things up, he doesn’t have different symbols for things, he doesn’t say things that Clarky wouldn’t say.”
The Canucks have a solid goaltending department, and this move was certainly the right call for both Silovs and DiPietro’s development paths.
Uncategorized
Recent articles from David Quadrelli