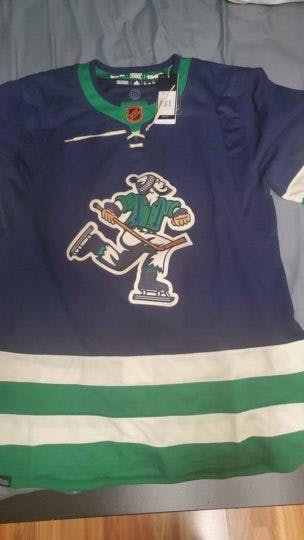 By Lachlan Irvine
4 months ago
The Vancouver Canucks’ alleged new Reverse Retro uniform for 2022-23, a navy and green Johnny Canuck jersey, leaked in a Facebook Marketplace post saturday afternoon. Multiple sources have confirmed the jersey’s authenticity to CanucksArmy, but the Canucks are unlikely to confirm those reports until the NHL’s planned unveiling for all 32 Reverse Retros later this year.
The Marketplace post in question had the jersey listed for sale for just $90 before being deleted late Saturday evening. Luckily, jersey blog Icethetics was able to get a screenshot before the listing disappeared.
The NHL’s Reverse Retro program was first introduced in the COVID-shortened 2021 season, with every team donning a remixed version of a throwback jersey created by Adidas for a handful of games. The Canucks chose a navy and green version of the Gradient Orca jersey from 2001 and proceeded to lose all four contests in the one-year-only sweater.
This year’s rumoured edition features a classic Johnny Canuck crest, based on a uniform first worn in 1962 by the proceeding Canucks franchise from the minor professional Western Hockey League. The original uniform’s red, white and blue colour scheme has been replaced by a modern navy jersey with green and white striping to match the present-day team.
The present-day NHL shield on the collar has also been recoloured copper to match its original look. While confirming the accuracy of the Canucks’ uniform, Flames Nation’s Mike Gould noted the shield choice falls perfectly in line with the Reverse Retro concept.
The uniform also features vintage white laces under the collar, which would be a first in the Canucks’ long jersey history. And while the leaked sweater shows no evidence of player numbers, the smaller size of the lumberjack crest may infer the presence of numbers being placed in the upper right corner, another feature from the original 1962 set.
If these are indeed the jerseys the Canucks have chosen for their Reverse Retro entry, it’s an uninspiring pick, to say the least. Plenty of people have pointed out the similarities to the uniforms Vancouver’s brand new AHL affiliate in Abbotsford began wearing last season, which also feature Johnny Canuck.
Many fans are holding out hope that this jersey will turn out to be an extremely convincing fake, and Vancouver will don a far bolder design instead, such as a green and blue edition of the Flying Vee or Flying Skate jerseys. But until the Canucks say otherwise, one can only dream.
What are your thoughts on the Canucks’ rumoured Reverse Retro? Let us know in the comments below.
Uncategorized
Recent articles from Lachlan Irvine