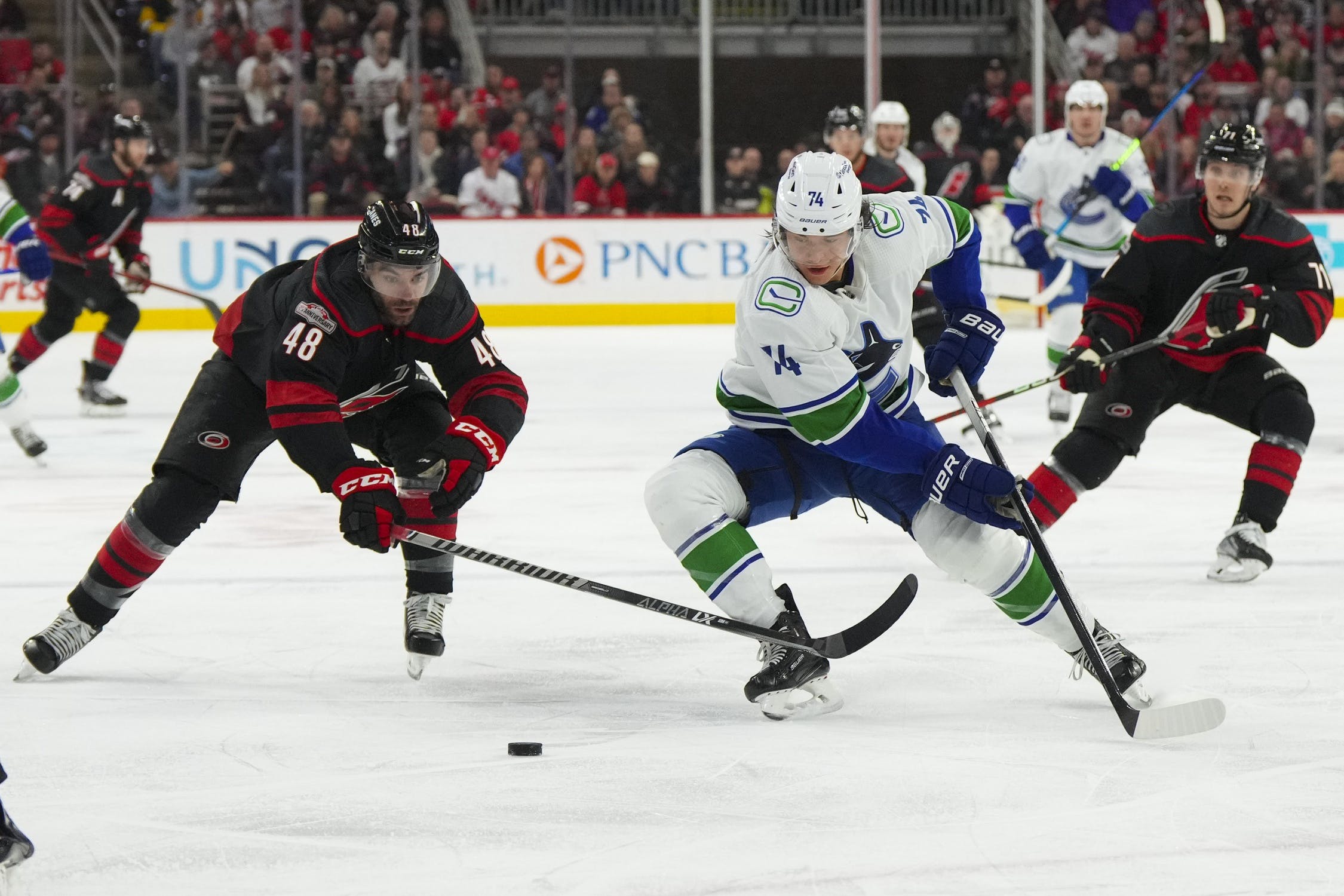 By Stephan Roget
10 days ago
It’s getting tough to dredge up any real excitement in the Vancouver hockey market these days, unless one counts anger as excitement.
It’s especially difficult to find anyone excited about Canucks POHO Jim Rutherford’s stated goal of retooling his team through the acquisition of young, post-ELC NHLers in need of a “second chance.”
Even when we published a list of 14 potentially enticing targets, the general response was a collective “been there, done that.” Having just lived through nearly a decade of the Jim Benning regime making similar promises with horrendous results, the local connotation of a “retool” is now decidedly negative.
But it wasn’t always that way.
The Benning Era was not the first time that the Canucks attempted to retool their roster using young NHLers from other franchises in need of fresh starts.
It was also something that they tried out as the late-‘90s transitioned into the early-2000s…and that time around, it almost worked.
Yes, the Canucks once built most of the core of their team through exclusively “second chance” trades. Three such acquisitions made up an entire top line.
An entire West Coast Express.
The first and most famous of these changes of scenery was the March 1996 trade that brought Markus Naslund to Vancouver in exchange for Alek Stojanov. Less of a retooling move and more a swap of disappointing talent, the trade brought a 23-year-old Naslund to his second NHL team just two-and-a-half seasons into his career and with a few months left on his ELC. Drafted 16OA in 1991, Naslund was considered a bit of a disappointment to that point.
In other words, at the time of the deal, Naslund was the exact sort of player Rutherford described as wanting his current Canucks to seek out.
And the rest, of course, is history. By the turn of the millennia, Naslund would be the Canucks’ leading scorer and captain, and he’d be joined by two linemates acquired in similar fashion.
The February 1998 trade that brought Todd Bertuzzi to Vancouver might be the one with the closest parallels to today’s situation. It saw a popular veteran (former) captain in Trevor Linden, whom many felt was run out of town to a large extent, flipped for a couple of young players and a pick.
Is Bo Horvat the next Linden? Canucks fans probably wouldn’t mind a similar trade return.
Bryan McCabe and the third round pick that turned into Jarkko Ruutu were also part of the trade, but it was Bertuzzi who would prove the star attraction over time. Just like Naslund, Bertuzzi was in his third NHL season and was just wrapping up his first contract when the Canucks acquired him. Like Naslund, the former 23OA pick was struggling to produce for his draft team.
But that didn’t last long in Vancouver. Within a couple of seasons, Bertuzzi was on the top line, and within four years of the trade, he was posting PPG numbers and rounding out into the league’s top power forward.
The Canucks completed the West Coast Express, though they didn’t know it at the time, with the acquisition of Brendan Morrison in March 2000.
This trade was a little different than the others. It still involved the Canucks dealing an aging veteran star in Alexander Mogilny for two young players in need of fresh starts, but each of Morrison and Denis Pederson were a full seven years past their draft dates when the Canucks picked them up.
But beyond being a little bit older at the time of acquisition, the pattern remains consistent for Morrison. After a lengthy college career, he was still only in his third NHL season when the Canucks traded for him, just wrapping up that first contract, and having an issue putting up points in the big league.
He’d complete the 1999/2000 season with nine points in 12 games for the Canucks, find his way onto the top line in between Naslund and Bertuzzi, and form the core of a team that probably would have been far more competitive if it hadn’t also given a second — and third and fourth and… —  chance to one Dan Cloutier.
As we said at the outset, the parallels to the Canucks’ current gameplan — or at least what Rutherford describes as the Canucks’ current gameplan — are right there for the taking. For those looking for a reason to be optimistic, the West Coast Express might just be the best-case scenario for a second chance-based retool.
But, like all good optimism, this set comes with caution. One might note that each of the above trades occurred two years apart, meaning it was a four-year process just to get the entire WCE in the door, never mind forming them into a cohesive top line beyond that. Others might note that, for all the fun that was had, the West Coast Express never actually won anything, nor did they come particularly close.
Still, the history of Naslund, Bertuzzi, and Morrison could be seen as, at the very least, reason enough to hope that this next batch of reclamation projects will be, at the very least, better than the batch that brough us Linden Vey, Luca Sbisa, and Sven Baertschi.
And sometimes hope is all we have.
Editorials
Recent articles from Stephan Roget