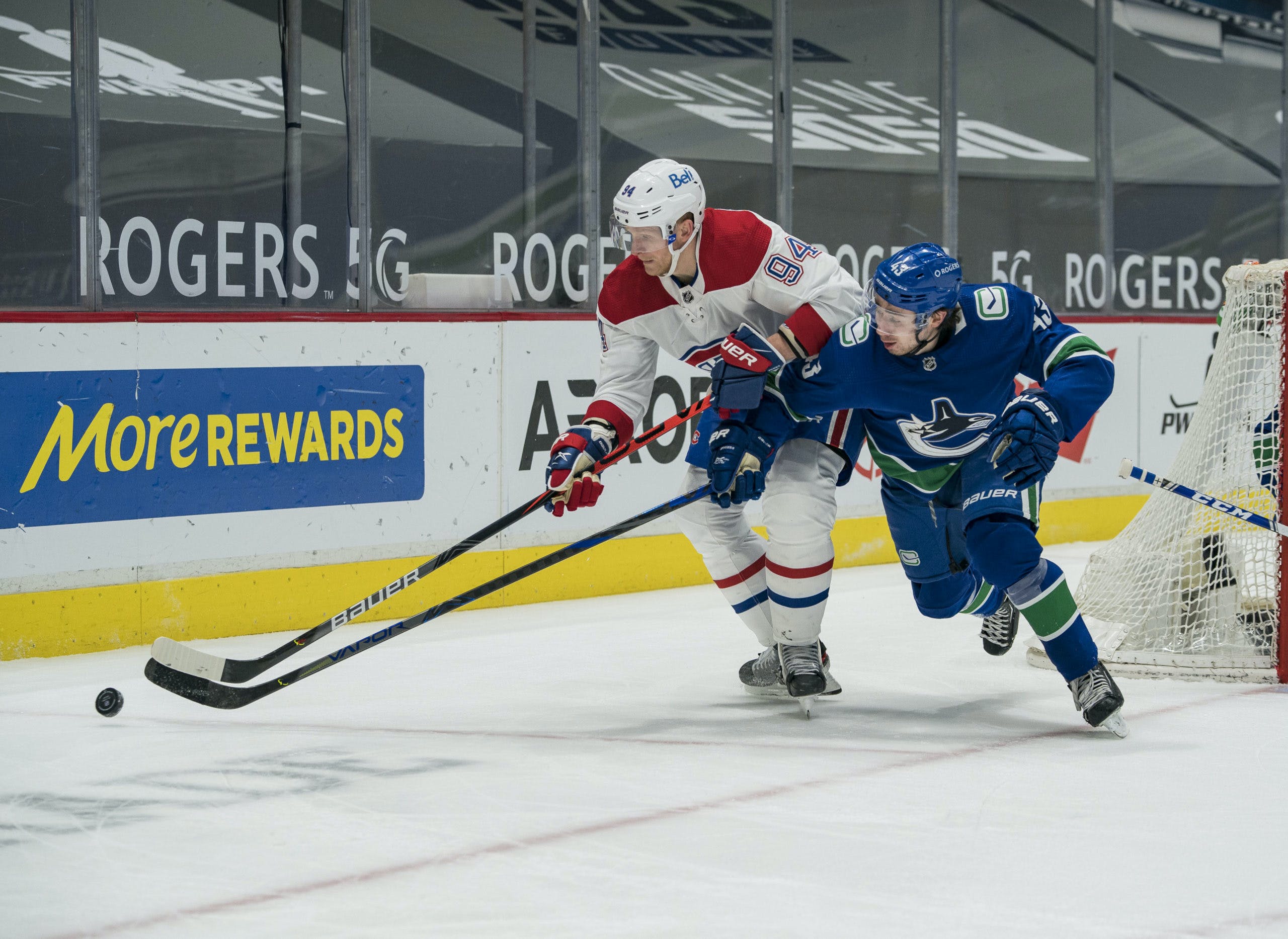 By Shu Lei Wu
1 year ago
Coming off of a historic rookie season and an impressive showing in the playoffs, expectations were high for Quinn Hughes heading into this pandemic-abbreviated 2020-2021 campaign. The Athletic had him ranked as the best defenceman in Canada, and some even had him in the Norris conversation. But what nobody expected was for him to take a step back.
A quarter of the way into the season, Hughes continued to put up points but his offensive achievements were overshadowed by a -10 rating and his team getting caved in at even strength every time he stepped over the boards. Given Hughes’ elite level skillset, the question of his bounce-back was more of a “when” and not an “if” question. Since about the quarter mark of the season (or about halfway through this young season), Hughes has quietly rebounded back to his dynamic and play-driving self and has reminded fans that he’s not just a one-dimensional offensive defenceman.

The main issue with Hughes’ early-season play was controlling play at 5-on-5, so we’ll start our analysis there. In the first 14 games of the season, the Canucks allowed a whopping 5.13 GA/50 with Hughes on the ice, against an xGA/60 of 3.65. Obviously, some of this overperformance in GA can be attributed to bad luck, but giving up 3.65 in expected goals per game isn’t a great look either. Since then, Hughes has cut his xGA/60 while he’s on the ice by almost a full goal, down to 2.82 xGA/60. A quick look at Hughes’ shot controlling metrics shows how he has vastly improved his ability to help his team control play at evens after the 14-game mark:

Via Evolving-Hockey
It’s not just that Hughes has improved on an abysmal start to the season in which he controlled 37.3% of expected goals. Other than actual GF% and xGF%, the Canucks have actually controlled play better recently with Hughes on the ice than all of last season. The discrepancy between the shot metrics and the xGF% value comes from the fact that the Canucks only control 44.3% of high danger chances when Hughes is on the ice, so they’re still surrendering a ton of high-quality chances against relative to what they’re creating.
Obviously, there’s also a bit of puck luck involved. In his first 14 games, Hughes’ GF% outperformed its expected value due to an on-ice shooting percentage of nearly 12%, whereas his current underperformance is in part due to a 6.6% conversion rate by his teammates while he’s on the ice that is likely to regress higher.
It’s also a fruitful exercise to understand Hughes’ performance relative to the rest of the Canucks’ defence. This way, we can glean some knowledge as to whether or not Hughes has actually improved individually, or if the whole team has just elevated its game. 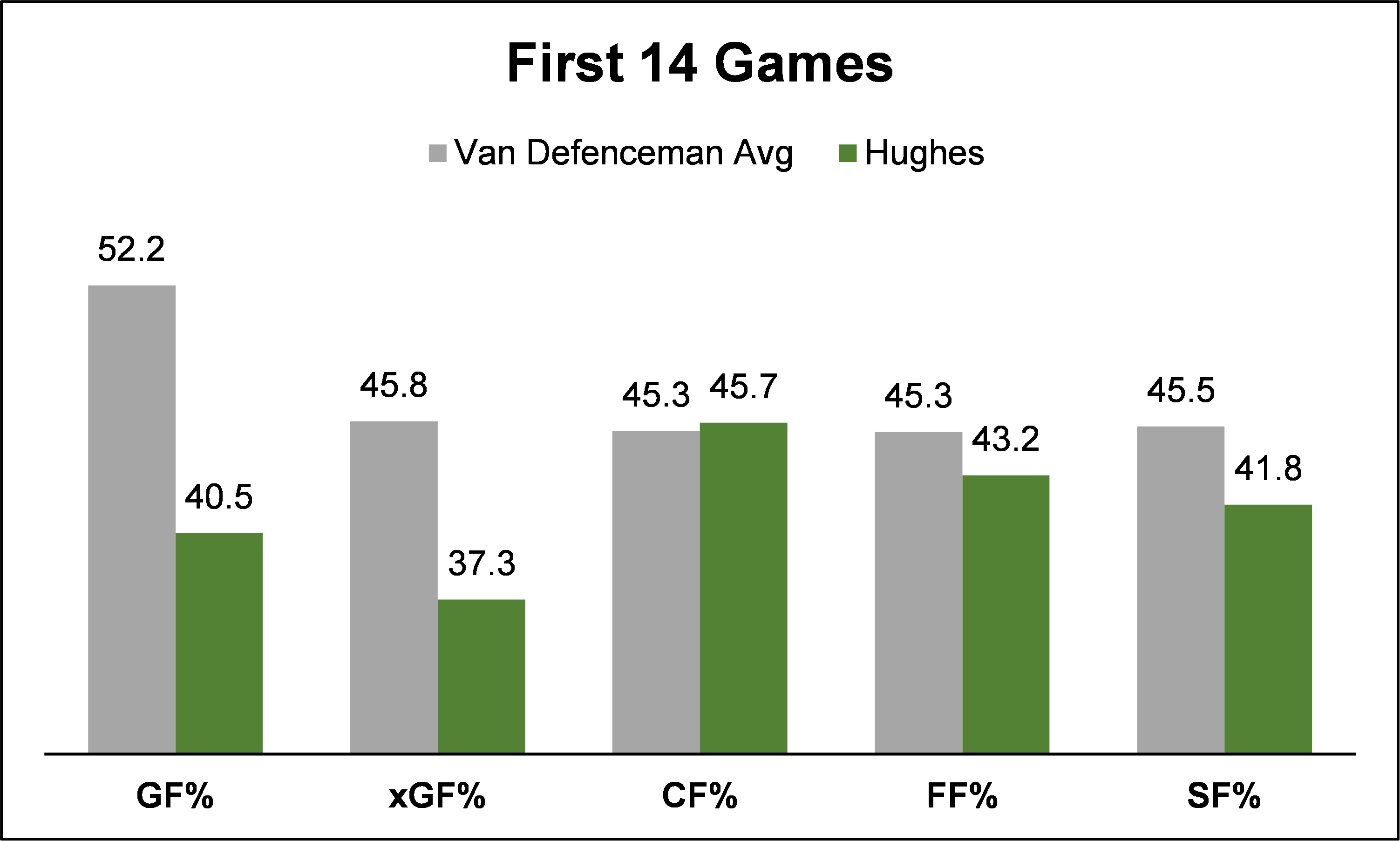 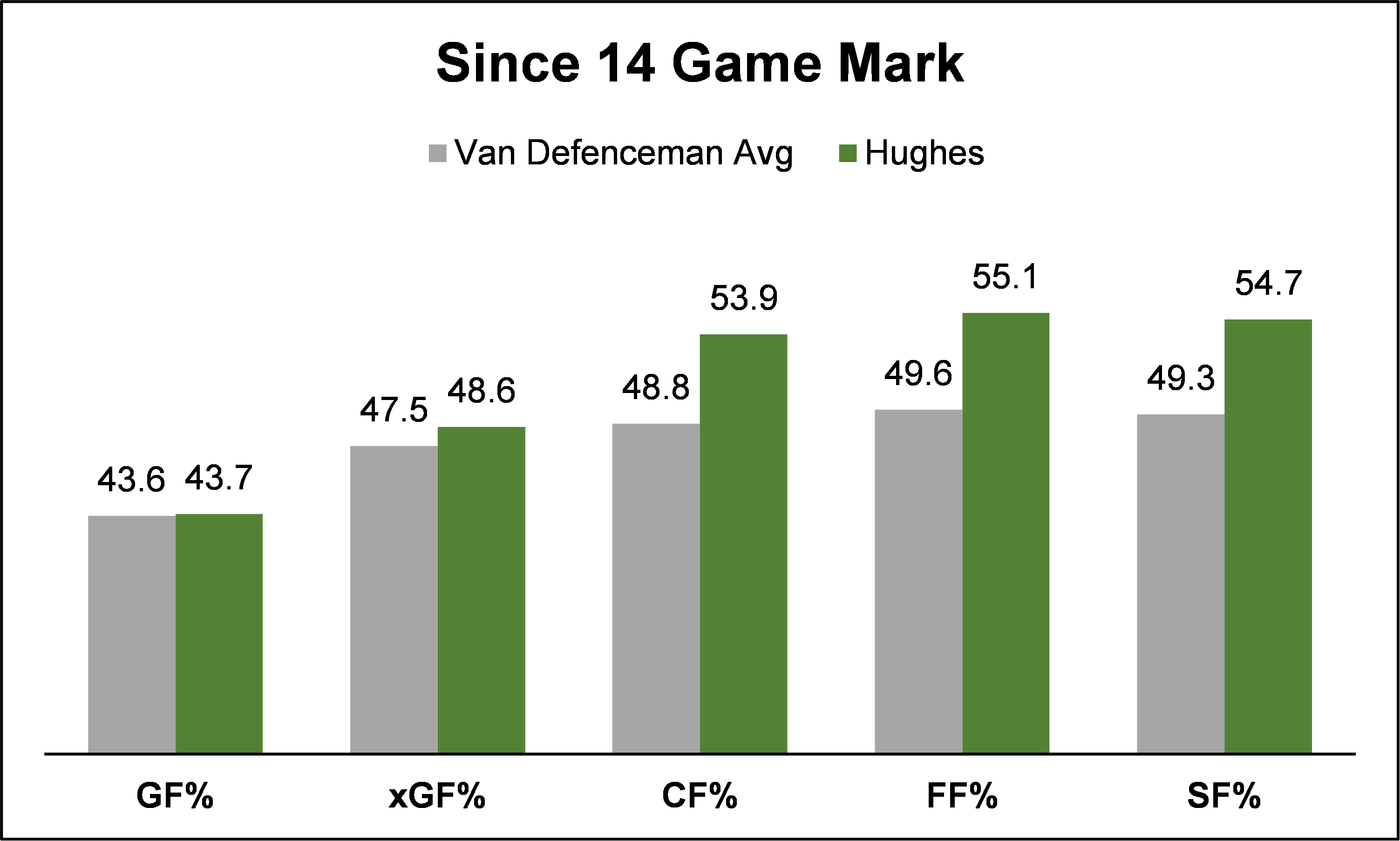 Via Evolving-Hockey
As we can see, Hughes was underperforming in the early-goings as part of an already disappointing start to the season. And make no mistake, the Canucks’ D-corps aren’t exactly world-beaters, so for an elite-level defenceman like Hughes to be underperforming relative to his teammates should put into perspective just how poorly he was playing to start the season. He wasn’t simply not playing Quinn Hughes hockey, he was actually one of the Canucks’ worst defencemen at controlling play. Since then, the Canucks’ D-corps has stabilized and improved across the board but are still underwater in terms of shot-controlling metrics. Hughes, meanwhile, has returned to form both relative to his teammates as well as to his regular self.
Another contributing factor is the Lotto Line’s rebound, with whom Hughes shares a ton of ice-time at 5-on-5. If we use Pettersson as a proxy for the Lotto Line, Hughes has spent roughly 41% of his even-strength ice-time with the Canucks’ top line. This is further reflected in the deployment chart shown below: 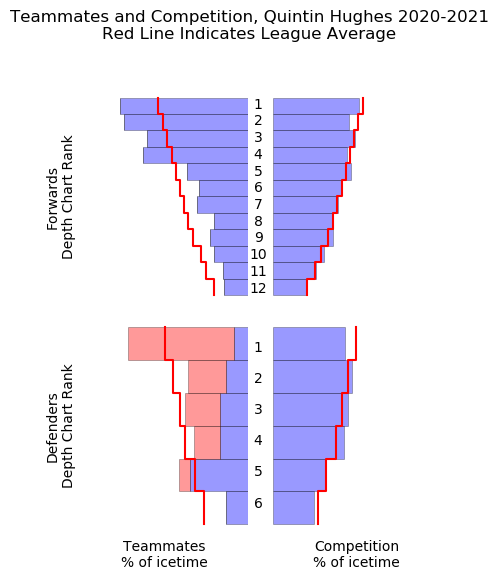 Via HockeyViz
Given this interdependency, the Lotto Line’s return to form has done wonders for Hughes’ on-ice numbers from a shot-controlling perspective.

Production-wise, Hughes finds himself in the opposite situation: he started off hot and has cooled off since. The sophomore defenceman has posted 24 points in 30 games, but only 9 of those have come after the 14 game mark. In fact, Hughes hasn’t registered a 5-on-5 point since the Canucks’ 5-1 win against the Flames on February 17th. Obviously, that’s something that has to change but at the end of the day, it’s a team sport, and Hughes’ resurgence as one of the Canucks’ top play-driving defencemen has been critical given how top-heavy the team is.
Since we’re working with an uneven amount of games, we can use per 60 stats to measure Hughes’ scoring efficiency.

Although Hughes’ points/60 has dropped in half since the first 14 games, what’s important to note is that his primary points/60 of 1.3 is higher than ever. Second assists are unpredictable and largely luck-based, and Hughes generated five power play second assists in his first 14 games to boost his total points tally. He hasn’t had the same luck since then, but you can expect him to pick up a few more points through second assists as the season wears on.
While the raw point totals between the 14 game mark and now look like two different players, the reality is that Hughes’ primary points production has remained fairly similar, he’s just not picking up the same amount of unsustainable second assists as before. If he continues to improve his ability to control play at both ends of the ice, however, the points will soon follow as they did earlier in the season.

The Canucks are widely recognized to be playing better hockey as a whole and that starts at the top of the lineup with players like Hughes. In a season so far that has been defined by two halves, Hughes will have to combine his early-season point production and recently improved play-driving skills if the Canucks want to actualize that slim bit of hope left for a playoff berth. They’ll need Hughes firing on all cylinders and playing at his best in order to compete moving forward.
Uncategorized
Recent articles from Shu Lei Wu