By David Quadrelli
10 months ago
The Vancouver Canucks’ struggles on the road continued tonight, as the club lost its third straight game in regulation, this time at the hands of the Carolina Hurricanes.
Jaroslav Halak was slated to start this game but was pulled due to a positive COVID-19 test. Thatcher Demko got the start and Spencer Martin was activated from the taxi squad.
Here’s how the Canucks lined up in front of Demko.
Let’s do this!

Myers blocked a shot that appeared to sting a bit but thankfully didn’t miss a shift.
Bo Horvat pounced on a loose puck in the neutral zone and made a power move to the net. Brett Pesce put the grab on the Canucks captain and was assessed a two-minute minor for holding.
The Canucks’ power play was split between the first and second unit, but the first unit was the only one that managed to get set up and generate anything of substance.
The power play went by the wayside with the Canucks generating just one shot on goal, and moved to 0-8 on the road trip.
Tyler Myers was assessed a two-minute minor for roughing after getting tangled up with Andrei Svechnikov. Myers didn’t like the call and made sure the refs knew it too.
The Hurricanes power play got to work and found Sebastian Aho in the bumper spot and let a one-timer fly that beat Thatcher Demko to make it 1-0 Hurricanes.
On the ensuing play, with the Canucks’ fourth line out, Vasily Podkolzin drew a holding penalty and sent the Canucks back on the man advantage.
The Canucks simply could not get set up, and even gave up a 2 on 1. Once again, the Canucks power play generated just one shot.
Bo Horvat moved in on the wing and wired one far side over Frederik Andersen’s left shoulder. 1-1.
The teams went back and forth with Thatcher Demko turning away some quality Canes chances.
Carolina took a bench minor with just under three minutes remaining and the Canucks were back on the power play.
Once again, the Canucks struggled to get set up, moving to 0 for 3 on the night, and 0 for 10 on the road trip.

The Hurricanes won a draw in the offensive zone and after Myers stumbled, the Canes made no mistake and beat Demko to make it 2-1 early in the second.
Shortly after, Elias Pettersson hit iron on a goaltender opportunity to tie up the game as his struggles continued.
The Canucks then gave up a 3 on 1 after Brad Hunt attempted to step up on Svechnikov, who spun off the check and moved the puck up to Martin Necas, who scored on his birthday to make it 3-1 Canes.
Conor Garland broke into the zone and was pitchforked to the ice, putting the Canucks on their fourth power play of the game roughly seven minutes into the second period.
Vincent Trocheck broke in on a breakaway but Quinn Hughes hustled back to catch up to him and negate the chance.
The Canes’ PK was aggressive and limited the Canucks’ chances and ability to get set up.
With 19 seconds to go on the man advantage, Vasily Podkolzin’s skate came up and hit Elias Pettersson in the face. Thankfully the blade hit the visor first and Pettersson remains on the bench with nothing more than a bloody nose.
The Hurricanes’ power play, which was red-hot in December, got back to work after Juho Lammikko took an interference penalty.
The Canucks killed off the penalty but still trailed by two while the Hurricanes kept up the pressure.
Andrei Svechnikov threw a couple of big hits on Conor Garland which drew the ire of Bo Horvat. The two were given offsetting roughing minors to go to 4 on 4 with just over three minutes to go in the second frame.
Höglander and Pettersson combined to generate the Canucks’ best chance of the period but were robbed by Andersen.
This one remained 3-1 heading into the third and final frame.

Elias Pettersson broke in on Andersen and was tripped up by the Canes goaltender which sent him hard into the boards. There was no call on the play and Pettersson’s frustrations continued.
Lorentz deflected a shot past Demko after Brady Skjei took a wrist shot from the wall to make it 4-1 Canes early in the third.
Marty Necas had a chance to record his third point of the game after breaking in on a 2 on 1 against Quinn Hughes with Tucker Poolman racing back. With Demko ending up in the corner after a sprawling Poolman collided with him, Necas couldn’t negotiate the bouncing puck into the back of the net.
Ian Cole took a cross-checking penalty after sending Elias Pettersson flying into Andersen.
On their fifth power play of the game, Pettersson replaced Tanner Pearson on the first unit. Pettersson let go of a one-timer that was stopped by Andersen, and that was the Canucks’ best chance of the man advantage as the Canes killed off their 35th straight power play.
“They don’t give you any room at all,” said Boudreau post game. “That’s a sign of a good team, and I mean, it’s difficult to make plays when you’ve got people in your face all night long, and they do a great job.”
The Canucks didn’t generate much, and the Hurricanes, who were in the driver’s seat all game long, took this one by a final score of 4-1. 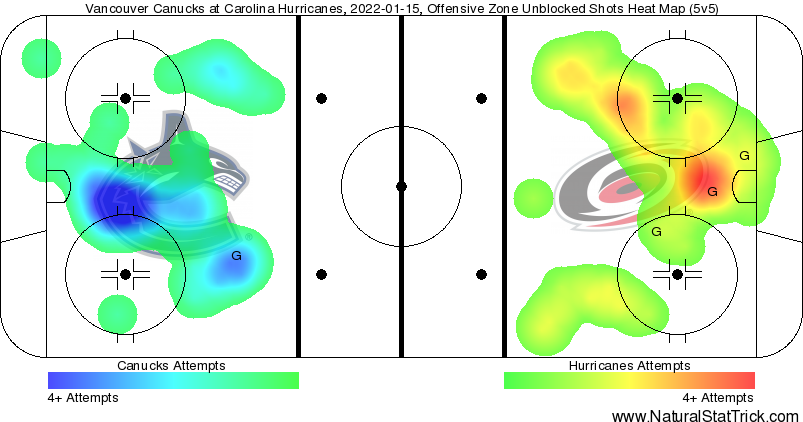 The Canucks lost their third straight game in regulation today, proving what most already knew.
The Canucks’ current roster construction simply won’t allow them to hang with the top teams in the league. When you look at how deep teams like Florida, Tampa Bay, and Carolina are, how the Canucks managed to keep these games somewhat close (not so much today’s, but certainly the first two) actually becomes almost impressive.
That being said, if the power play found a way to convert at a more respectable clip, then we might be looking at a different outcome in at least one of these games.
It’s no secret that some of the players on this roster have loads of potential, but also that changes are certainly needed for this team to take the next step.
You know it, we know it, Jim Rutherford knows it.
The Canucks are right back in action tomorrow morning when they take on the Washington Capitals. Puck drop is at 11 AM Pacific Time.
Uncategorized
Recent articles from David Quadrelli