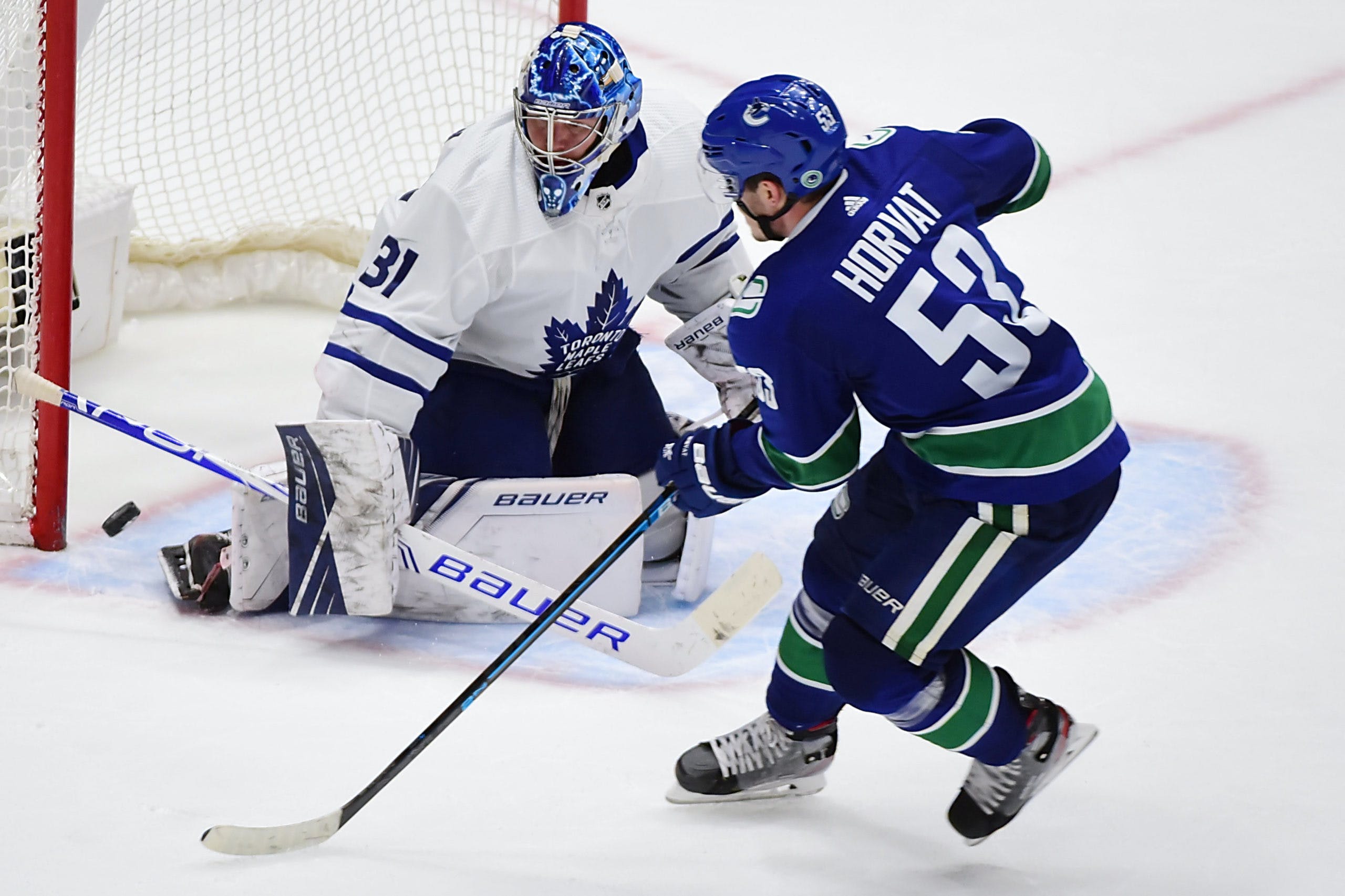 By Jason Jhutti
1 year ago
Vancity meets The Six.
The Toronto Maple Leafs — who the Vancouver Canucks will face off against nine times this season — have the top spot in the North Division all but officially clinched.
After three consecutive first-round exits, the Leafs entered the Toronto bubble to break that trend, which they did. Instead of losing in the first round of the playoffs, the Leafs got bounced by the Columbus Blue Jackets in the play-in round.
Last season the Leafs took both meetings with the Canucks by scores of 4-1 and 4-2. The Canucks haven’t had a great start to this season and looked dejected against the Leafs in game one of nine on Thursday night.
That being said, the previous three seasons have been a mixed bag from the west coast team.
Over the past three seasons, the Canucks own a .417 points percentage against the Leafs. Mind you, the Canucks have just left their rebuild while the Leafs are years into their Stanley Cup window.

Past three seasons head to head

With a top-tier power play, it’s a little surprising that the Canucks had killed off 14 straight against the Leafs prior to Thursday night. This is a trend that Travis Green would have loved to see continue through Thursday night’s game.
Bo Horvat, Brock Boeser, and Elias Pettersson have combined for four points in the past three years, with Pettersson being held off the score sheet in all three of his games against the Leafs. However, all three found the score sheet in the one game thus far, meaning Pettersson has a point against each NHL team in his career.

Sitting in the top ten in most offensive categories such as goals per game, wins, shots, and power play percentage, the Leafs have been one of the best regular-season teams and have started this season the same way. With the power play clicking at 40%, teams are well-advised to not take any penalties against them as both units are lethal.
As indicated in their early postseason exits and the start of this season, their defensive game needs work. Allowing over 700 goals in the past three years for a team with Stanley Cup aspirations just isn’t good enough.

The Leafs have a plethora of skill up front, which they will continue to rely on. The familiar names of Auston Matthews, Mitch Marner and John Tavares are back and still are producing at a great clip. The trio will be a thorn in the Canucks’ side all year long. Including Thursday’s game, all three are averaging a point a game against the Canucks the past three seasons with a combined 22 points.
The Canucks’ top lines need to match up and play a shutdown role, and with the Leafs’ depth, it will be hard not to have Horvat’s line as one of the lines in a shutdown role.

What’s new with the Leafs

Older than his head coach, the biggest name the Leafs brought in was Joe Thornton. The 41-year-old began the season playing alongside Matthews and Marner but is currently out with a rib injury. The future Hall of Famer provides the Leafs with leadership and playing ability, but for now, his expected return date remains a mystery.
Signing TJ Brodie is the most significant signing one for Toronto. A defence that finished 26th in goals against per game, Brodie will provide stability along with Reilly and Jake Muzzin.
The Leafs also brought in some grit as they signed Wayne Simmonds and Zach Bogosian while adding some skill with Jimmy Vesey. They also brought Finnish defenceman Mikko Lehtonen over from the KHL.

What to expect from the Leafs

Leafs head coach Sheldon Keefe likes his team to capitalize on their chances by utilizing their skill. He sets up his offence in a structured way that the skilled players have the freedom to create. As for his defence, he wants all five players to put a lot of pressure on the opposition, force turnovers and transition quickly while using their skills effectively in the offensive zone. Discipline, competitiveness, and work ethic are the three pillars of a Keefe system.
With one of the deepest forward groups in the entire league, the Leafs can come at you in waves and waves. The Canucks need to sustain the tsunami and attack off the rush, or they won’t last long in this series, as proved by Thursday night’s loss. The Canucks need to get back to their ways of last season in playing hard against and outworking the opponent, which is typically right up their alley.
Overall, the Canucks need to find what made them a “team like that” within. Help is not on the way, and if there were help on the way, it would be a week or two away anyway thanks to COVID-19 protocols. They need to be better against higher quality teams quickly with the halfway mark right around the corner, or this will quickly turn into a long season for Canucks nation.
Uncategorized
Recent articles from Jason Jhutti