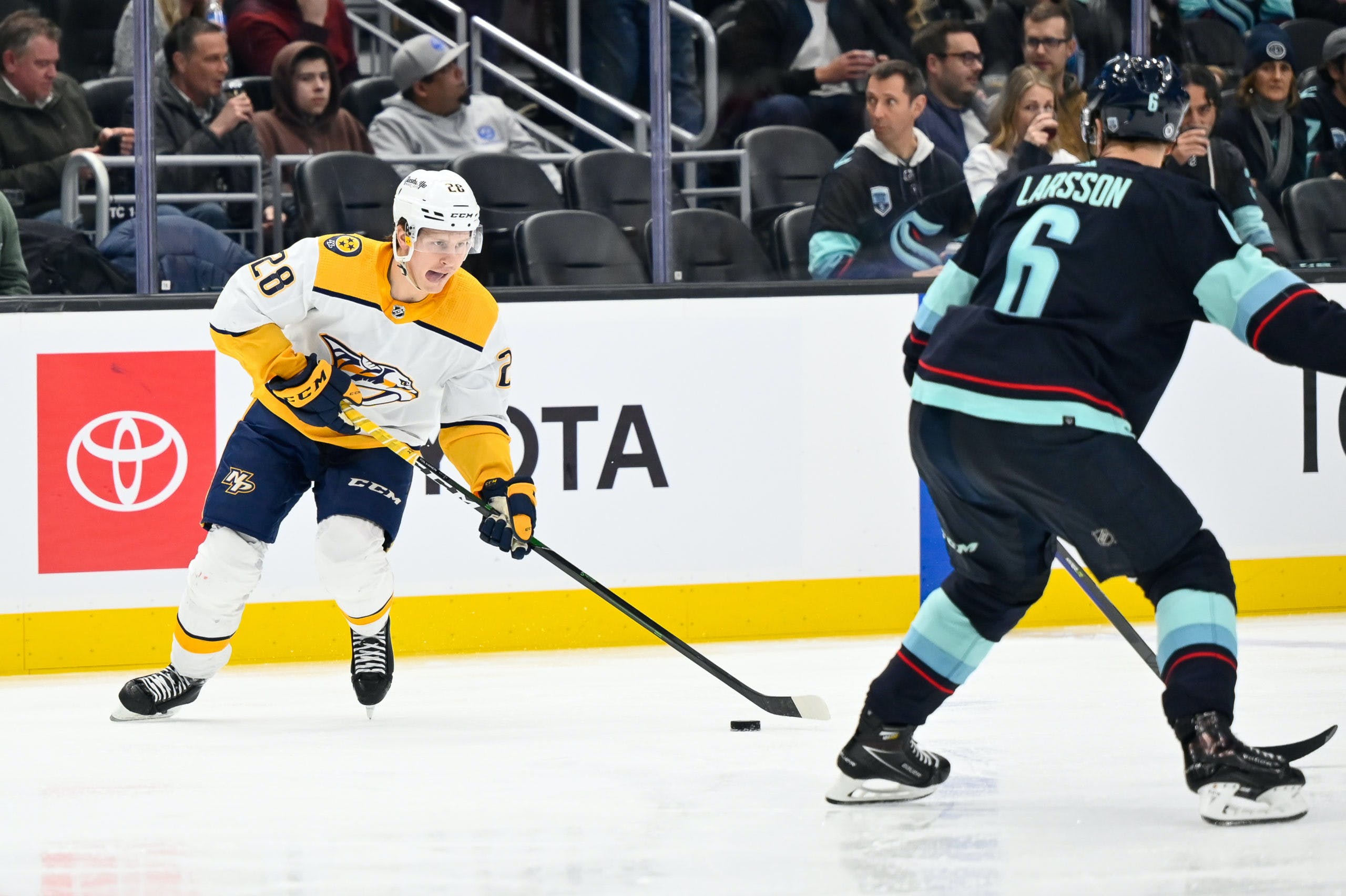 By Noah Strang
1 month ago
Some big news hit the hockey world on Sunday as the Nashville Predators placed forward Eeli Tolvanen on waivers. The winger was a first-round pick in the 2017 NHL Entry Draft but has had trouble adjusting to the NHL. His numbers have been trending downwards since he scored 22 points in 40 games during the 2020-21 season.
Speculation began instantly as to which teams would put in a claim for Tolvanen. When the dust settled on Monday morning, it was the Seattle Kraken who had won the sweepstakes. This is a bit surprising considering the fact that the Kraken were 23rd on the priority list. With the Canucks at 10th, it means that Vancouver did not put in a claim.
It’s a very rare occurrence in the NHL when an asset with as much potential upside as Tolvanen becomes available for next to nothing. With a cap hit of just $1.45 million, making the money work would not be too difficult of a maneuver for the Canucks. Nils Åman is waiver exempt and could have been sent down to make some room. As long as Tucker Poolman stays on LTIR, the Canucks could’ve gotten creative with their bottom six and made Tolvanen fit.
No matter if you see the Canucks as rebuilding or retooling, it can be agreed upon that they should be taking low-risk swings for discounted assets. That’s exactly what claiming Tolvanen would have been. Instead, the Canucks now get to watch him play for a division rival.

Brief overview of Tolvanen’s past

At one point, Tolvanen was one of the most exciting prospects in hockey. As a 15-year-old, he managed to score 84 points in 41 games playing at the U18 level in Finland. He impressed scouts with his offensive toolbox including strong puck skills and a powerful shot.
“Heating back up again in the USHL. One of the top pure snipers in the draft this season,” Jeff Marek of Sportsnet wrote in the lead up to the 2017 NHL draft.
In the year after he was drafted, Tolvanen played the majority of his games in the KHL. Despite being just a teenager, he recorded 36 points in 49 games in the notoriously low-scoring league. That type of production against players ten years his senior had the Predators very excited.
However, since making the full-time transition across the pond, he hasn’t been able to find a consistent role. All in all, he’s played 135 NHL games and managed to score just 25 goals and record 26 assists, good for a grand total of 51 points. There’ve been flashes of that offensive dynamo scouts once projected but he hasn’t been able to put it all together.

Why the Canucks should have claimed Tolvanen

While adding Tolvanen to the roster would’ve meant another winger, adding to an already crowded position group, his two-way prowess and potential make him a much more exciting option than other players already on the team.
The Predators organization has taken note of Tolvanen’s improved two-way play in the past, but this season the player found himself healthy scratched many times.
“[Tolvanen] is a very good two-way player,” Nashville Predators head coach John Hynes said back near the start of the 2021 season. “He doesn’t have many points or goals in the preseason, but his game is in good shape. Now it’s just got continue on into the regular season.”
His advanced stats have fallen off a bit this season, but he’s only played in 13 games. That’s too small of a sample size to draw any serious conclusions from. If we take a look at what he has done over this year and last combined, a total of 88 games or almost one full season, his numbers start to look better.
Over that time frame at 5-on-5, Tolvanen is rocking a 50.90% expected goals percentage. This means that the Predators typically control just over half of the expected goals while Tolvanen is on the ice. This is better than they do when he’s dressed but not on the ice.
In short, Tolvanen has been an interesting case study as he’s become a solid bottom-six winger. While he was drafted to be this flashy top-six player, and he definitely does still show flashes of that skill, he’s carving out an NHL career as a play-driver that may not always show up on the box score.
Claiming a 23-year-old that has shown the ability to drive play, comes with a cap hit of $1.45 million, and has the skill set to be a significant offensive producer is not something the Canucks should be passing up on. Just two seasons ago, Tolvanen scored at a 22.55 goal pace, a number better than wingers Connor Garland, Tanner Pearson, or Vasili Podkolzin managed last year.
Claiming Tolvanen would not have made a huge difference in the team’s success this year. However, it’s exactly the type of low-cost move the Canucks should be making to churn through bottom-six forwards in an attempt to unearth a few diamonds in the rough. Considering the low upfront cost necessary, the Canucks made a mistake passing up on this one.
Editorials
Recent articles from Noah Strang