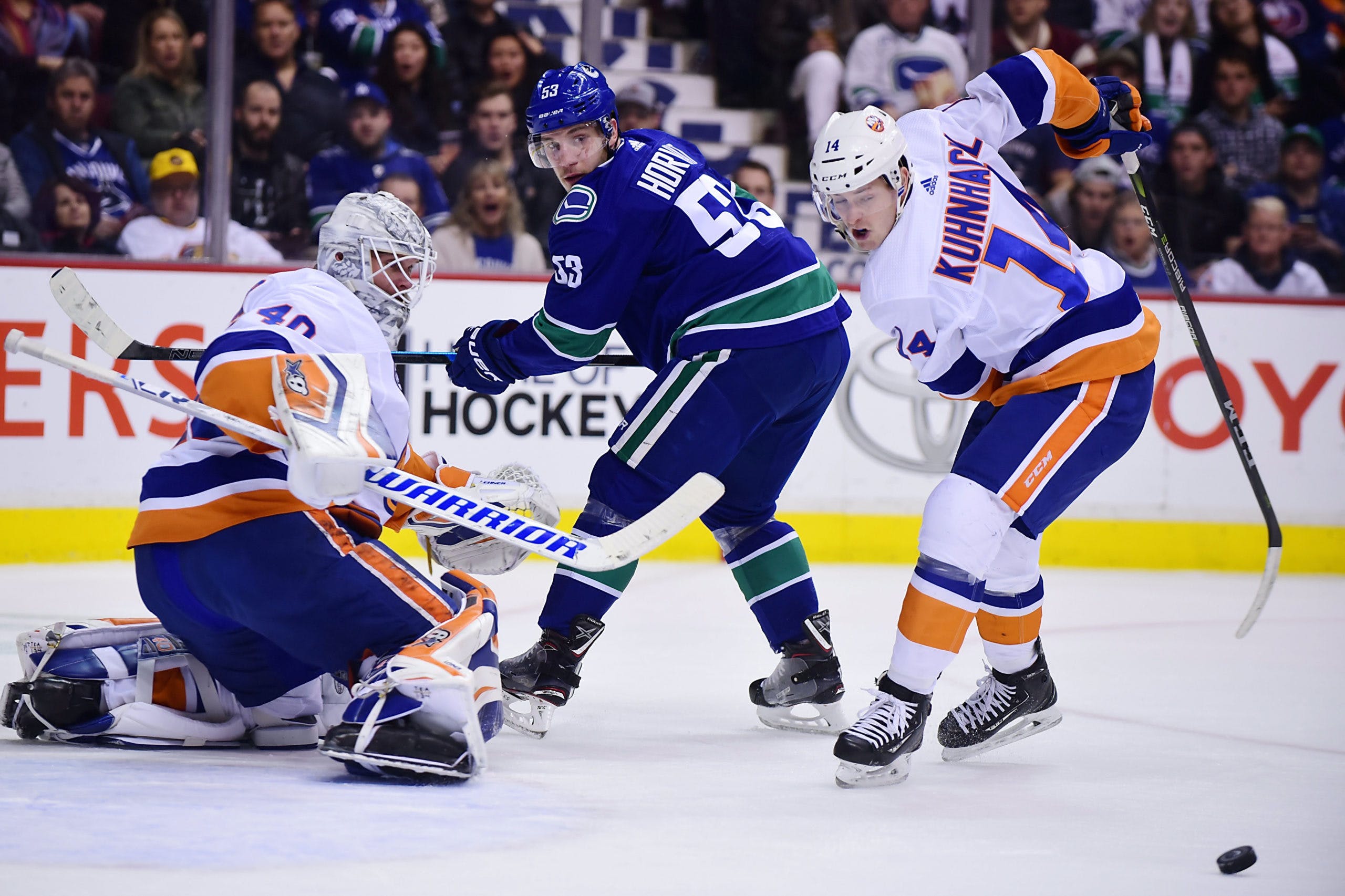 By Lachlan Irvine
9 months ago
The Canucks matchup against the New York Islanders tonight is one between two opponents with a lot to prove.
Don’t let their records fool you. The Islanders might be sitting ten points behind the Canucks in the league standings, but just like Vancouver, New York has rebounded from a slow start after starting the season with 13 straight games on the road and a November COVID outbreak put them dead last in the Metropolitan Division.
Throughout it all, Barry Trotz’s system of defence-first hockey has remained steady, while Ilya Sorokin and Semyon Varlamov have been a rock solid goalie tandem all season. Now the Islanders sit one win shy of .500 and fifth in the NHL in Goals Against per Game, with up to nine games in hand on some of their division rivals.
In Vancouver, the Canucks’ blue line has been surprisingly adaptable in their own right, owning the NHL’s best goals against average at even strength. But a large amount of credit for that record goes to two players; Thatcher Demko, who’ll be backing up Jaroslav Halak tonight, and Quinn Hughes, who remains in COVID protocol.
The loss of Hughes is an especially bitter pill to swallow for Vancouver tonight, who’ll be tasked with matching one of the NHL’s best defensive groups and shutting down the dynamic Mat Barzal without their star blue liner. Vancouver passed its first test without Hughes against the Arizona Coyotes last night, but the Islanders will provide a much bigger challenge.
The Canucks only hosted an optional skate today, and will likely ice the same pairings from Tuesday’s 5-1 win over Arizona.
Oliver Ekman-Larsson, Tyler Myers and Luke Schenn will continue to be relied upon for heavy minutes tonight. Depth defenders like Kyle Burroughs, Brad Hunt and Noah Juulsen can expect to keep seeing their ice time boosted across the board as well.
The effort Bruce Boudreau’s team will require to win against the Islanders goes far beyond just their defencemen. The forward corps will also be expected to step up their efforts around Jaro Halak’s net in Hughes’ absence, both to make up for his missing defensive prowess and scoresheet contributions.
If the Canucks can open the scoring and force the Islanders to bring the play to them, it’ll open up Vancouver’s opportunities in New York’s end as well. The last thing Vancouver will want is for the Islanders to grab the lead, opening the door for Trotz’s “park the bus” strategy to kick in and hound the Canucks’ zone entry attempts for the rest of the night.
Puck drop between the Canucks and Islanders from Rogers Arena is at 7:00 PM Pacific, with TV coverage on Sportsnet in Canada and TNT in the United States.
Uncategorized
Recent articles from Lachlan Irvine