Canucks game day: No McDavid or Draisaitl as J.T. Miller looks to hit the big 100 in Canucks’ season finale versus Oilers 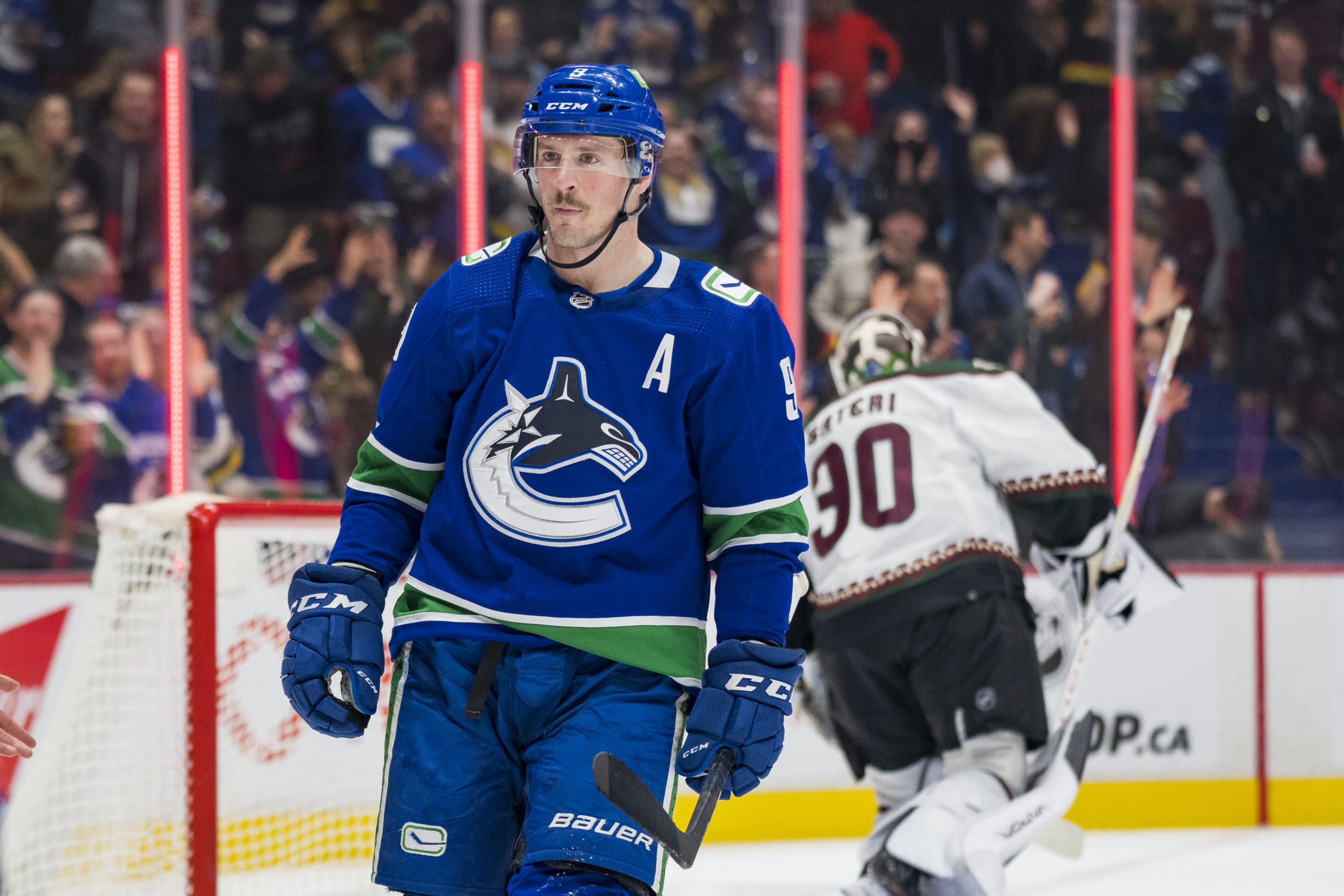 By Lachlan Irvine
9 months ago
After 199 days and 81 games, the finish line for the 2021-22 season is finally in sight for the Vancouver Canucks. The long, winding marathon ends in the same place it began: at Rogers Place in Edmonton against the Oilers. And what an eventful journey it’s been.
When this season began there was palpable hope around the Canucks thanks to a weakened Pacific Division, new contract extensions for Elias Pettersson and Quinn Hughes, and a smattering of new signings expected to bolster Vancouver’s scoring depth. There was the belief that general manager Jim Benning had assembled a group capable of competing for a playoff spot, and that head coach Travis Green knew the right buttons to push to get them there.
And it worked! Well, sort of.
No matter what results from tonight’s tilt in Edmonton, Vancouver can hold their heads high, having hit the 90-point mark for the first time since 2014-15. But for some, the cost to get there was dire.
After a start to the season that saw the Canucks win just eight of their first 25 games, out went Benning, Green and the majority of the front office. In stepped a new regime led by President Jim Rutherford, GM Patrik Allvin and head coach Bruce Boudreau.
Suddenly, the Canucks had nowhere to go but up. Over the course of their last 56 games, the Canucks went from near the NHL basement to posting a 32-15-9 record and only being eliminated from postseason contention on Tuesday. With a winning percentage of .652, just ten clubs — all playoff teams — will have finished the season stronger than these Canucks.
But perhaps most importantly during this span, hockey in Vancouver became fun again.
J.T. Miller, whose frustrated audible swears became a common joke among fans last season, became a 95-point superstar. Elias Pettersson, whose struggles over a year and a half had some questioning his ceiling, regained the form that made him a Calder Trophy winner in 2019.
Quinn Hughes, who had difficulty adjusting to a far more defensive role in his sophomore season, became a much steadier presence while still finding the gear to break Doug Lidster’s decades-old record for points by a d-man. And elite netminder Thatcher Demko… well, he just kept being Thatcher Demko.
We could be here for ages discussing each and every key contributor that’s made the last 56 outings fun, and we likely will over the coming months. But there’s still one game left to play, and with nothing but a summer full of questions on the horizon, what is there left to play for?
Quite a lot, actually. J.T. Miller sits just two points shy of the legendary 100-point marker, and will likely be given free rein by Bruce Boudreau to get as much ice time as he needs to break that glass ceiling. The Oilers, for their part, seem prepared to give Miller a proper crack at it by choosing to rest their two stars, Connor McDavid and Leon Draisaitl.
Miller isn’t the only one with an important milestone in his sights. Brock Boeser is a couple of goals away from 25 on the year after a sluggish start, and with big contract negotiations coming up he’d love nothing more than to hit that number. Boudreau will be icing the same lineup that won against the Kings last night, but don’t be surprised if the coaching staff elects to frontload the top six in an effort to free up Miller and Boeser for scoring chances.
The Canucks head coach is also on the verge of notching the 600th win of his career, so tonight’s game has plenty of importance.
Spencer Martin, who’s been rock solid filling in for the injured Thatcher Demko and Jaroslav Halak, will likely get the final start of the season as Mikko Koskinen gets the nod for the Oilers. In addition to McDavid and Draisaitl, Edmonton will also be without the services of Darnell Nurse and Philip Broberg on the blue line.
Puck drop between Edmonton and Vancouver is scheduled for 6:00 PM Pacific, with coverage on Sportsnet 1 and Sportsnet Pacific.
Uncategorized
Recent articles from Lachlan Irvine