How the Canucks can finish the season on a high note, even if the playoffs don’t follow 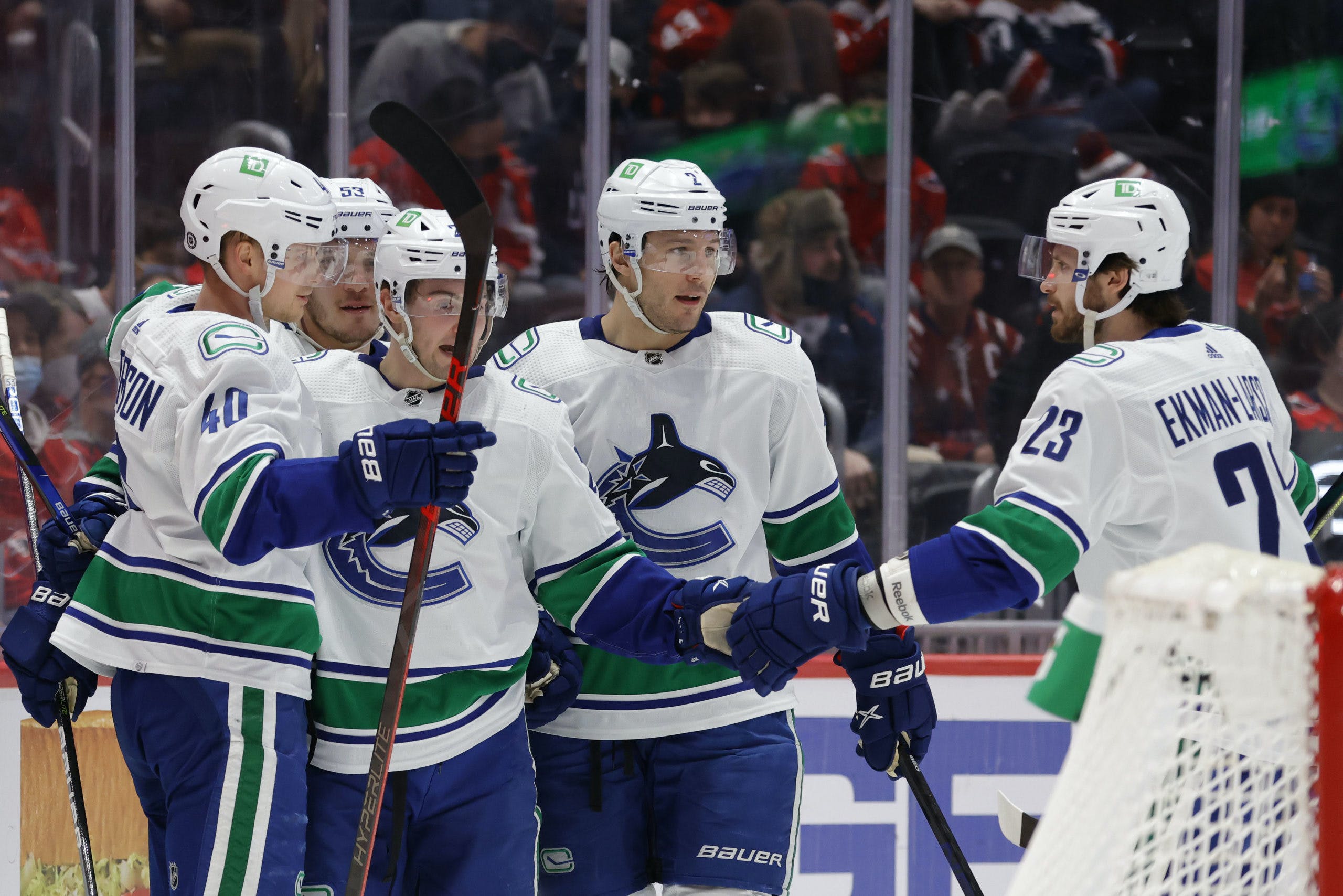 By Lachlan Irvine
9 months ago
Two months ago, the thought of the Canucks getting anywhere near a .500 record seemed impossible. Now, as they prepare for the first round of COVID-related makeup games, they sit directly in the middle, sporting a 20-20-6 record with 35 games remaining.
But even though Vancouver’s chances of ending 2021-22 with a winning record have vastly improved, their road to a playoff spot is still shrinking at a quick rate. The Kings, Flames and Oilers have all hit hot streaks recently, and the Golden Knights are preparing to get an important reinforcement for their forward corps as Jack Eichel begins practicing.
Despite the incredible amount of effort the Canucks have put in to win games recently, they’re still left with a steep hill to climb and the edge of the runway visible. So how do you make the final push count, even if postseason games aren’t assured in your future?
It all comes down to the individual players, and the heights they can reach as a unit.
The Canucks are in the unusual spot where despite their record, a number of their players are garnering league-wide attention. Thatcher Demko is returning from his first All-Star appearance with a seriously great shot at picking up votes for the Vezina Trophy, thanks in large part to turning one of the league’s most questionable blue lines into a team that currently sits first(!) in the NHL in goals allowed at even strength.
J.T. Miller is sitting in a tie for 25th in the league in points, and Elias Pettersson seems to have finally turned the corner when it comes to his offensive production.
Couple that with the expectations of a trade deadline firesale on the way under new Canucks management, and Vancouver’s roster has a lot to play for. For some skaters like Conor Garland and Tanner Pearson, this stretch is about proving they can be part of the solution into next season and beyond. For others, it’s about making themselves irresistible for a playoff team and earning a late-season move to a Cup contender.
Even as some players move on to greener pastures, that opens the door for some Abbotsford skaters to make a good impression on Bruce Boudreau and his coaching staff heading into next year. We’ve already seen what Spencer Martin can do under pressure, and he may be looked to as a viable backup for Demko next season because of it. With Quinn Hughes slated to sit out the next three games due to COVID protocols, Jack Rathbone will likely earn regular NHL shifts again this week and he certainly hopes to stick there. And pending UFAs like Sheldon Dries and Nic Petan will be looking to earn a pay raise, be it here or elsewhere, so any call up to the big club will result in 100% effort regardless of where the Canucks land in the standings.
Setting yourself up for the future is far more important than an eighth seed postseason berth where the Canucks are at, but the onus isn’t on the players to make that happen. All you can ask from the roster going forward is to show real progress in improving at special teams, which have levelled off since the early lift under Boudreau, boost their teammates up in their hopes of being noticed by the organization and beyond, and above all, never let a lack of effort get in the way of their full potential.
Provided that COVID doesn’t throw any more wrenches into the mix, if the Canucks end the season around the same .500 mark they’re at now while putting together valiant efforts against strong opponents and winning the few games they’re supposed to — tonight against the Coyotes springs to mind — then it’s going to be hard for anyone to look at the next three months as anything other than a success. But who knows; maybe by quietly chipping away at the deficit in front of them and with a little bit of luck, they might end up surprising everyone at just how far they could go.
Uncategorized
Recent articles from Lachlan Irvine