By Stephan Roget
1 month ago
Even-strength production has been a very informative statistic when it comes to the Vancouver Canucks of late.
Even-strength production predicted JT Miller’s offensive breakout. EV points indicated just how good Conor Garland was in his first season with the Canucks, and how bad he was at the outset of his second.
Today, even-strength production is telling us something we all already knew, but that it’s nice to get extra confirmation of, anyway: that Elias Pettersson has truly ascended into the uppermost echelon of NHL talent.
A quick glance at the leaderboard for even-strength points in the NHL will reveal Pettersson ranked fairly high with 29 points, tied with Leon Draisaitl and Nikita Kucherov for fifth place as of this writing.

From NHL.com
Only Erik Karlsson, Sidney Crosby, Jason Robertson, and Connor McDavid have more points at evens. Only Mikko Rantanen and Robertson have more EV goals than Pettersson’s 16. That’s impressive company to keep, with all of those players likely on their way to the Hockey Hall of Fame. But it becomes even more impressive when you notice that Pettersson has the least games played of anyone on the list at just 32.
Those 29 EV points in 32 games gives Pettersson an EV PPG of 0.91. That’s higher than Pettersson’s own all-situations PPG was coming into the season, and it’s the second-highest of the league leaders after the ageless Karlsson and Crosby and their mutual 0.94 EV PPG.
Call them even-strength producers, call them drivers of play, call them offensive leaders. Whatever they are, it’s clear that when listing the best and brightest the NHL has to offer, one should be listing names like McDavid, Robertson, Crosby, Karlsson, Rantanen, Draisaitl…and Pettersson. One of these things is not not like the others. That’s an accurate representation of the league’s top talent, and Pettersson belongs.
In fact, Pettersson might just be the leader of the pack as far as the 2022/23 season goes.
QuantHockey keeps track of players’ production per 60 minutes and allows for sorting by situation, which lets us check in on Pettersson’s even-strength points per 60. There, he breaks away from the crowd with a staggering EVPP60 of 3.805.

From QuantHockey
That’s the second-best in the league after Jeff Skinner and his 3.865, and a considerable distance ahead of third-place Morgan Geekie and his 3.645. Really, no one is particularly close to Skinner and Pettersson’s production rate.
And, not to disparage Skinner at all — in the midst of a bounceback in Buffalo worthy of its own celebration — but the ol’ eye test will state pretty clearly which of the two is most earning their even-strength points through genuine, sustainable talent. And, well, it ain’t Jeff Skinner.
It’s also worth noting the context within which Pettersson has been accomplishing these numbers. Aside from Skinner, all the other players present on the EV leaderboards around the NHL come from far better teams than the Vancouver Canucks. There’s also the question of consistent linemates. You may have noticed that those leaderboards tend to feature sets of teammates. Skinner is joined on the EVPP60 charts by teammates Tage Thompson and Alex Tuch, while Geekie — like a character in a Sir Mix-a-Lot song — gets (Daniel) Sprong.
You’ve got to head all the way down to the 20s in the EVPP60 chart to find Pettersson’s first teammate, and it’s Andrei Kuzmenko, the player with whom he’s shared the most EV time this season.
But that seems like far more a measure of Pettersson’s impact on Kuzmenko than the other way around, because it doesn’t really matter who Pettersson plays with at even strength, he’s still going to produce. 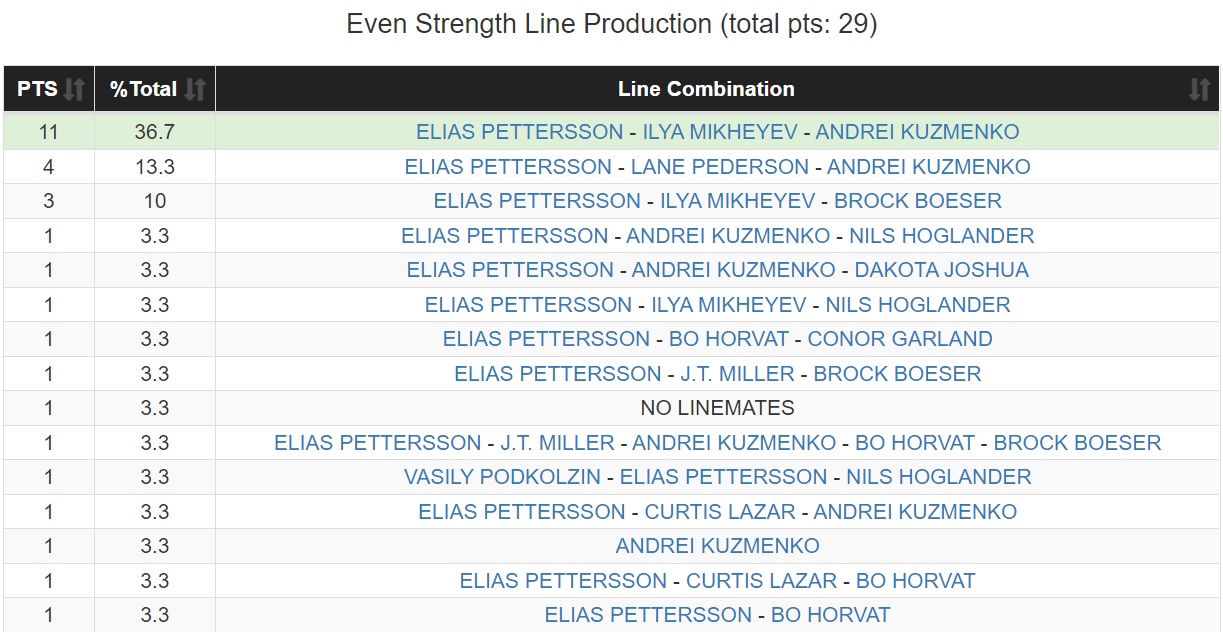 From Dobber’s Frozen Tools
Note that Pettersson has spent about 35% of his EV time with Kuzmenko and Ilya Mikheyev, and has also earned about 35% of his EV points with them. He’s notched points at the same rate whether he’s paired with the likes of Brock Boeser, Lane Pederson, and Nils Höglander.
Really, this here is the measure of a true play driver. All of those EV points are clearly derived from Pettersson’s presence on the ice more than any other factor. And that statistical truth is definitely backed up by what folks can see on the ice on a nightly basis.
Pettersson controls the game at 5v5. At times, he dominates it. But he is always in command out there, and that has promoted him to the most elite grouping of NHL talent available. Canucks fans are watching a genuine superstar emerge before their very eyes, and it’s well worth checking in on objective measures like even-strength production every so often just to marvel at how far Pettersson has progressed as a player.
McDavid, Crosby, Karlsson, Pettersson.
It’s starting to sound right, and it’s something we’re all going to have to get used to.
Editorials
Recent articles from Stephan Roget