Canucks’ collapse against Vegas showcased a team completely unable, maybe even unwilling, to protect their own leads 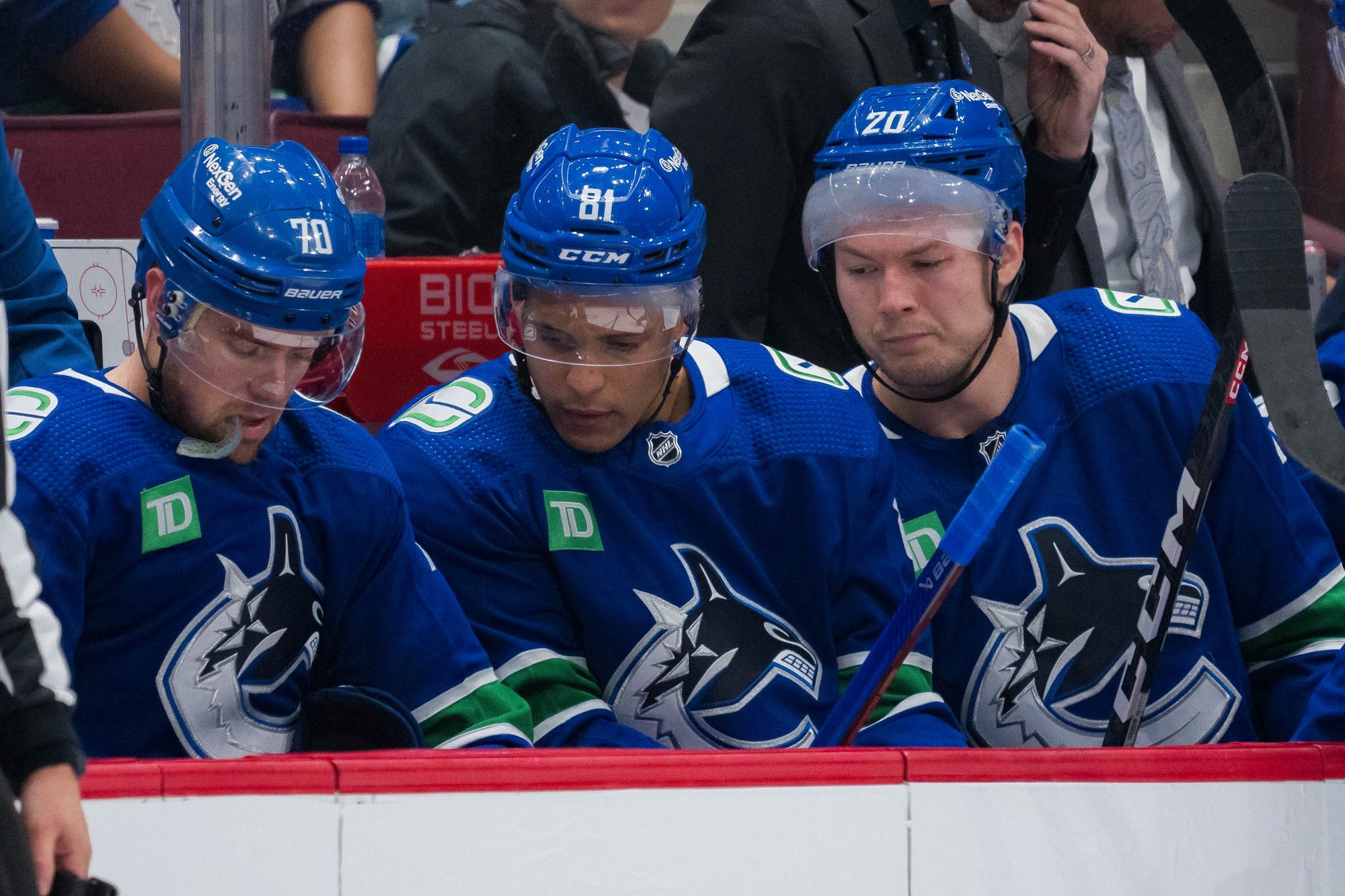 By Lachlan Irvine
2 months ago
The Vancouver Canucks’ entire season can be summed up by a camera lens.
In the third period of their tilt against the Pacific Division-leading Vegas Golden Knights, the Canucks found themselves in an all-too-familiar position; possessing a multi-goal lead on a superior opponent. After Elias Pettersson’s goal midway through the final frame gave the Canucks a 4-2 lead, the whole team’s strategy seemed to shift. Vancouver sat back as the offensively-charged Golden Knights quickly found the back of the net to cut the lead to one.
As soon as Vegas smelled blood in the water, the game felt lost. Reilly Smith tied the game two minutes later, and the Golden Knights would eventually walk away with a 5-4 victory. But not before the Canucks had a chance to change their fortunes.
After Smith’s goal, Vancouver got their luckiest break of the season; an OEL clearing attempt took a bounce off of a camera lens protruding slightly through the photographer’s hole in the glass. The Knights stole the bouncing puck and set up the potential tie-breaking goal, but the Canucks challenged for a “potential game stoppage”.
Lo and behold, the War Room in Toronto agreed with Bruce Boudreau’s coaching staff. The goal was waved off, and the game remained 4-4.
The Canucks were suddenly granted a second chance, and they immediately squandered it.
Alex Pietrangelo’s game-winner was about as embarrassing a defensive effort as the Canucks could muster, allowing a blue-liner to waltz to the front of the net with no resistance for an easy shot against Thatcher Demko. It was one of multiple goals where Vancouver sat back and let Vegas completely have their choice of scoring opportunities.
The Canucks might have the scoring talent to take leads, but the team’s indifference toward trying to protect them is becoming more and more obvious. When Luke Schenn was asked if he felt there were issues with Boudreau’s system, Luke Schenn gave a telling answer and placed the blame in a different place.
“It’s inexcusable. It’s nothing to do with systems, or what the coaches are telling us, it comes down to battle and compete,” Schenn said after the loss. “We’re getting outmuscled and outbattled in front of the net and in the blue paint. We practice it all the time. For whatever reason, everyone just needs to be better in front of Demmer there, and that’s where games are won and lost.”
If the rest of the roster had the same commitment to winning as players like Schenn and Elias Pettersson, who made the single-best empty net save of the season, then the Canucks would be in a lot better a position than they are now. But as the Canucks are currently constructed, they don’t have the skill, or worse, the drive, to fight off comeback attempts and hold on to a preserved lead.
This is a hockey team that has seemingly resigned themselves to their own label; a group with all the offensive weapons a team could want, that can’t defend to save their life. It’s almost as if they read all the season previews that wrote about their flaws in their own end, said to themselves, “Yeah I guess they’re right,” and then drove directly into the skid.
Make no mistake, this team is certainly better than they’ve let on this season. But once a group has this little belief in themselves to win games, it’s hard to ever recover from it without an aggressive amount of changes. Changes that a new coach won’t solve.
There are pieces on this Canucks roster so talented that they’ll be able to persevere, regardless of the overall locker room mentality. But nights like Monday tell us that unless someone steps up and takes it upon themselves to get this team to believe again, the end of the road for this core is approaching faster and faster.
At least we’ll always have the camera lens.
Editorials
Recent articles from Lachlan Irvine