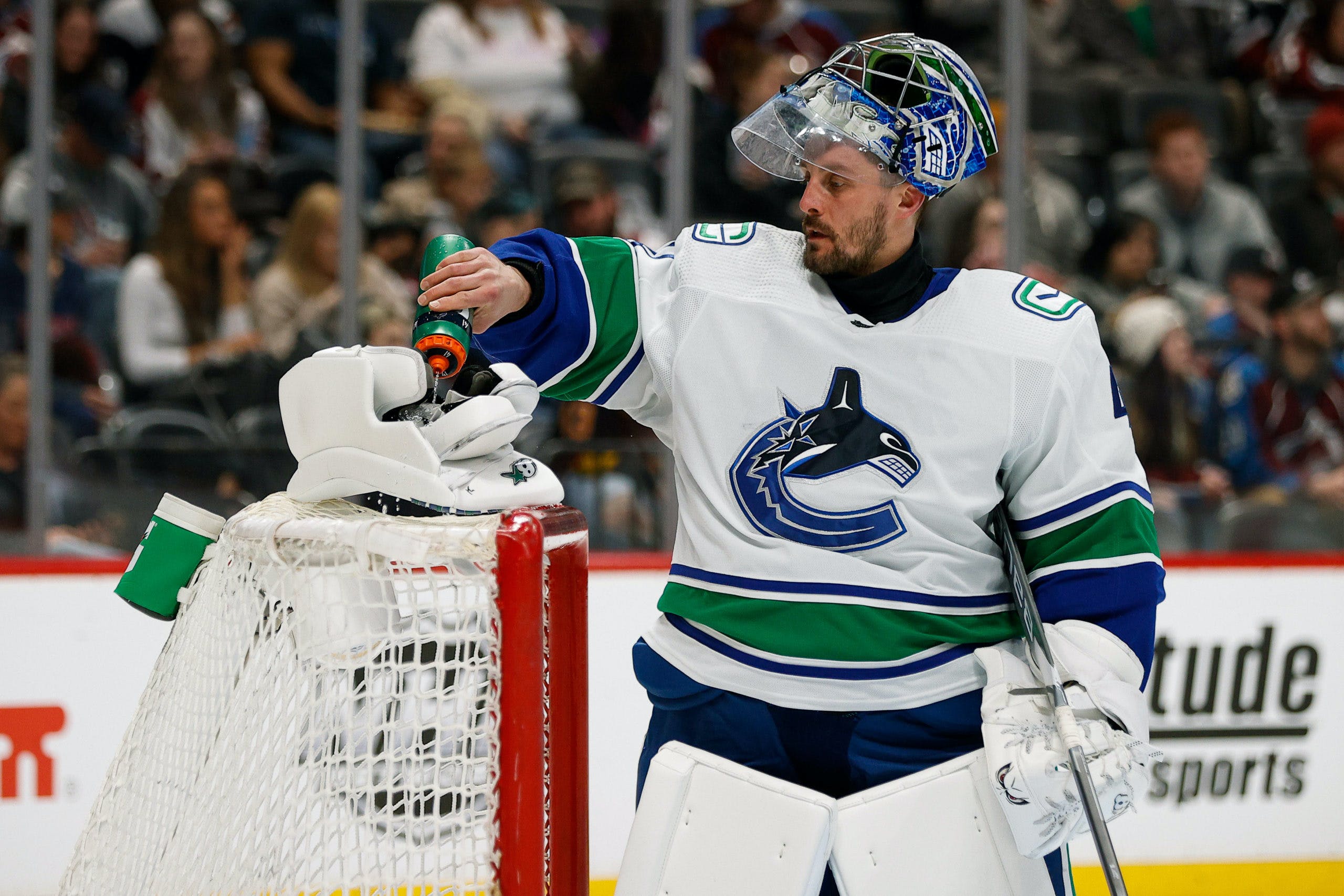 By Lachlan Irvine
7 months ago
Jaroslav Halak needed a win more than anybody. And he earned it in a big way on Wednesday night in what J.T. Miller called the Canucks’ “ballsiest effort of the season.”
Halak completely stymied the President’s Trophy leading Colorado Avalanche in a 32-save performance, while his Canucks teammates gave him all the run support he needed in a 3-1 win.
Halak was quick to credit his teammates for their play, particularly during the first and final frames.
“I thought we played really well the first period. The second period we got into penalty trouble a little bit, but I thought like halfway through, things opened up a little bit,” Halak said. “We were able to get out of the period 0-0, and I thought in the third we came out and we were doing what we’re supposed to do.”
J.T. Miller, who scored the eventual game-winner early in the third period, felt the team got a huge lift from Halak’s confident play. “Jaro was amazing. Bailed us out when there was a breakdown,” Miller said.
“He was an absolute rock, he was on. He was just on this morning and he had that aura about him that he was gonna be a difference-maker today and he played awesome.”
And that effort from his defence played a big part in the final score. Juggling the inconsistency of his starts with a tendency to start games slowly has been a nightmare for Halak this season, leading to several games where he and the Canucks have fallen behind the eight-ball early.
In Colorado, Vancouver’s blue line limited the Avalanche’s chances early and gave their goaltender a chance to get a feel for the game. By the time Nathan MacKinnon and Nazem Kadri began to take over offensively during the second period, Halak was fully dialled in.
“It’s been a long year. It feels like every time he goes in, we play like crap,” Miller said about the way they’d struggled to aid their goalie in games past. “It’s nice to put a decent performance in front of him, and then when stuff happened he was there to shut the door.”
A couple of weeks ago, a win like this seemed out of the question. Halak’s name had been involved in countless rumours leading up to the NHL trade deadline, but his $1.25 million bonus for games played and no-movement clause proved to be stumbling blocks that no team was willing to deal for.
“I can only answer it if it was me,” said head coach Bruce Boudreau pregame when asked if the motivation would be higher for Halak given what he’s gone through recently. “I’m the kind of guy that’d say ‘I’ll show you guys,’ and he doesn’t want to end his career, he wants to play more. The best way to do that is is to play well, and to me, he’s only had two bad outings. I mean, it came at inopportune times of course, but we’ll see tonight. The fear of losing is the biggest motivator of all and we’re playing arguably the best team in the league tonight.”
But with the stress of the deadline behind him, Halak played like a weight had been lifted off his shoulders. And it wasn’t due to the low altitude in Denver.
“I just wanted to get out there and have fun,” Halak said. “Now that the trade deadline is over, I don’t have to focus on anything else. I’m here and I just want to help the team because we are in a playoff push and we may need to be playing proud hockey from now on if you want to make it.”
While the playoff window seems to be closing on the Canucks, with a few more strong performances from their backup and the teammates in front of him, perhaps Jaroslav Halak can salvage a tough season in the best way.
Halak is set to hit free agency next offseason as a 37-year-old this offseason, and performances like last night will certainly make it loud and clear to teams that he is still more than capable of playing in the NHL.
Uncategorized
Recent articles from Lachlan Irvine