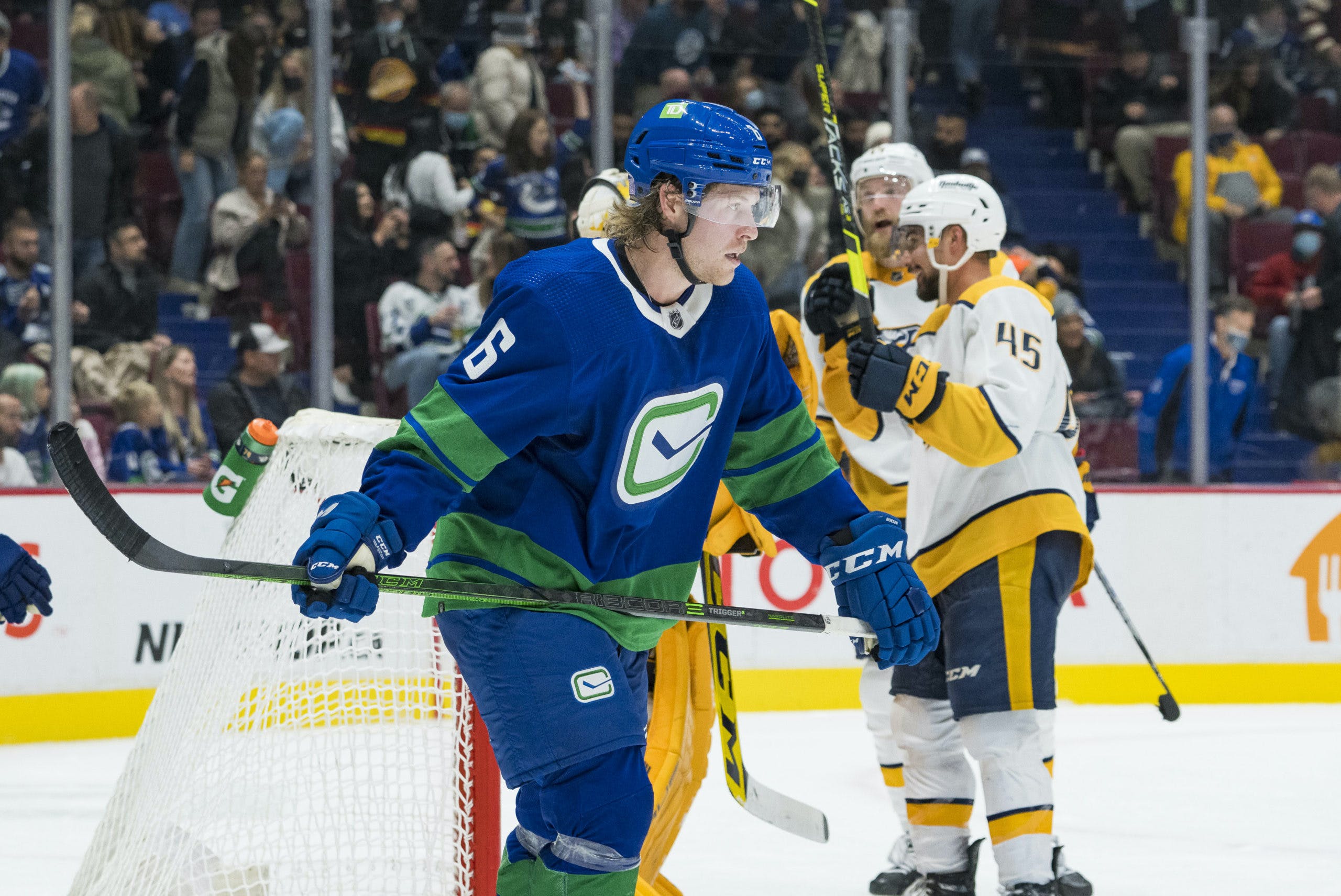 By David Quadrelli
1 year ago
On the heels of their most thrilling victory in recent memory, the Vancouver Canucks welcomed the Nashville Predators to Rogers Arena.
Coming into tonight’s game, the Predators had a record of 5-5.
The Canucks, on the other hand were 4-5-1 on the season, and had a chance to get back to .500.
Here’s how the Canucks lined up tonight.

Thatcher Demko started in goal for the Canucks, with Juuse Saros opposite him for Nashville.

Elias Pettersson did his dekes right off the bat in this one.
Seconds into the game and on the Canucks’ first breakout attempt of the game, Pettersson pulled off a nifty and creative move to evade the pinching Predators defenceman.
He moved into the zone, but with Tucker Poolman as his only passing option, Pettersson let go of a wrist shot that was handled by Juuse Saros.
It was a small play, but it was the kind of play Pettersson wasn’t making earlier in the season when he didn’t look like himself. It can only be taken as a good sign.
The two sides went back and forth, and with the shots 3-3 five minutes into the period, Nils Höglander took a tripping penalty.
The Predators quickly converted when Roman Josi let go of a blast from the point to make it 1-0 Predators early on.
The Predators continued to pour on the pressure, and although they weren’t on the man advantage, had some extended zone time where they managed to cycle the puck and get some fairly nice looks off on Thatcher Demko.
The Miller-Pettersson-Garland line had a solid shift in the Predators’ zone with just under ten minutes remaining. They stymied a Predators breakout attempt and managed to get two shots off on Saros.
It was a good sign for a line that’s hoping to start producing at five-on-five with the addition of Garland and Pettersson starting to look more like himself.
Around the halfway point of the first, Travis Hamonic slotted next to Quinn Hughes as the line blender came out on the defence pairings.
With five minutes remaining in the first, Dante Fabbro took a roughing penalty after getting tangled up with Elias Pettersson.
The Canucks then nearly got scored on immediately after.
As they so often have this season, the Canucks’ power play struggled to get set up, and once they did, they struggled to get much of anything created in terms of quality chances.
Back at even strength, neither team were able to generate much.
There was one chance that brought the fans at Rogers Arena out of their seats, however.
And it came almost as soon as The Lotto Line found themselves on the ice together.
Brock Boeser received an exceptional cross-ice pass from Travis Hamonic, and with a quick head fake, got Juuse Saros to bite before stickhandling the puck around the Nashville netminder into the yawning cage to make it 1-1.
The Boeser goal marked the first goal scored at 5-on-5 while Boeser has been on the ice this season.

There was a scary moment to begin the second period when Luke Kunin took a shot up high and fell to the ice in a heap.
Clutching his ear, Kunin skated to the Predators’ bench as the play was blown dead.
Thankfully, he appeared to be no worse for wear and remained at the Nashville bench.
The Canucks’ top gunners did exactly what they’re supposed to do and created some quality chances at even strength.
Quinn Hughes broke the puck out and found himself coming down the wing with time and space. Hughes let go of a bullet of a wrister that beat Saros but rang off the crossbar.
The Canucks then got a power play opportunity after Phil Tomasino took a tripping penalty.
With Boeser back on the first unit, the Canucks actually managed to get some chances created, but once again, could not convert.
The Predators sprung Tomasino out of the box for a breakaway, but Demko was up to the challenge.
The Lotto Line was reunited and had a shift that gave fans flashbacks to 2019-20. Their passes were crisp, and their chances were aplenty.
The Horvat line followed that up with another strong shift in the Nashville end. This time, Nils Höglander found himself alone at the side of the goal after receiving a slick backhand pass from Bo Horvat.
Similar to Boeser’s goal, Höglander was patient in getting Juuse Saros to come out and bite on a head fake before neatly tucking the puck in behind him to make it 2-1 Canucks.
Shortly after, a miscommunication between Tyler Myers and Brock Boeser at the Canucks’ blue line allowed Matt Duchene to break into the Canucks’ zone on a breakaway. He made no mistake, and just like that, the Canucks’ lead was no more. 2-2 with just over seven minutes remaining.
Then we had a FIGHT!
Tanner Jeannot and Luke Schenn dropped the gloves, with the advantage going to Jeannot.
Boeser and Garland rotated in and out of the right wing spot on the Canucks’ first line all night long.
With 5:51 remaining in the second, the line managed to draw a penalty after some strong pressure in the neutral zone caused Matthias Ekholm to panic and haul down Conor Garland.
After some strong keeps at the line, the Canucks actually had more than a couple of strong looks on the power play. Unfortunately, they once again couldn’t find the back of the net.
The Predators had a prime scoring opportunity after Tyler Myers failed to break the puck out of the Canucks’ zone, but as is often the case, Demko was up to the challenge.
Then, at 18:26, Myers took a tripping penalty to put the Predators back on the man advantage.
Nashville converted shortly thereafter, with Tomasino capitalizing on a perfectly executed set play by the Predators’ power play personnel to make it 3-2 Predators.

For the second game in a row, the Canucks needed to muster up a third period comeback if they hoped to come away with a victory in front of their home fans.
Bo Horvat took a hooking penalty three minutes into the third, delaying the potential Canucks comeback.
The Canucks managed to kill off the penalty without much trouble, and we were back to even strength.
With a hair over 13 minutes remaining, the Canucks went back on the man advantage when Alex Carrier took an interference penalty.
You know how this story begins, and you know how it ends. The Canucks did not score on the man advantage.
In fact, they gave up a shorthanded chance against after a miscue from Quinn Hughes. Thankfully, Thatcher Demko is the Canucks’ goaltender, and was there to save the day.
Shortly after the penalty expired, Vasily Podkolzin was set up after a gorgeous no-look pass from Elias Pettersson in tight. Unfortunately for the Canucks, Juuse Saros is the Predators’ goaltender:
With 7:41 remaining, Nick Cousins took a holding penalty to put the Canucks back on the man-advantage.
Typically, this would mean the Canucks had a golden opportunity to get right back into this one, but with the way their power play has looked on this homestand, we’re not so sure.
The Canucks controlled the zone for the second half of the power play, and once the Nashville penalty expired, they kept it up.
The Canucks managed to change personnel while five tired Nashville skaters stayed out. The Preds iced the puck, and the Canucks sent out the Horvat line in hopes of capitalizing and tying this one up with time dwindling down.
The Preds managed to vacate the zone and get their tired bodies off the ice as the Canucks continued to turn on the pressure.
With 1:40 remaining, the Canucks pulled their goaltender and Elias Pettersson made a mad coast-to-coast dash into the Nashville end.
Nashville managed to clear the puck out of their end, and the Canucks called a timeout with 1:14 left on the clock as power play coach Jason King drew something up at the bench.
The Canucks sent Quinn Hughes, Garland, Pettersson, Boeser, Miller, and Horvat out on the ice as they tried to tie this one up late.
The Canucks executed a set play with Horvat as the trigger man in the slot, but once again, Saros was up to the challenge.
After a Nashville icing with 10.8 seconds left on the clock, the Canucks set up for one last offensive zone faceoff and one last chance to come back in this one.
The Preds clogged every lane possible, and managed to come away with this one by a final score of 3-2. The Canucks’ special teams struggles continued tonight. Head coach Travis Green made a point of noting that the Canucks’ penalty kill wasn’t good tonight, not just the power play.
The penalty kill went 0-4 in the faceoff dot tonight, while Nashville’s went 6 for 8 on the night.
“We got to win more faceoffs for starters,” said Green. “It’s a simple thing, but it matters.”
The Canucks are now 1-20 on this homestand with the man advantage. We sound like a broken record at this point, but with the personnel they have, that’s simply unacceptable.
“It comes down to just shooting the puck, and putting in the effort to get the puck back,” said Brock Boeser. “Opening up another chance to shoot the puck, crash the net, keep it simple. You can’t keep looking for the perfect play and we just got to find a way. We got to find a way. There’s no excuses.”
Special teams made the difference tonight, and it cost the Canucks a victory.
The Canucks are back in action on Sunday night when the Dallas Stars will be in town. Puck drop is at 7 PM from Rogers Arena in game five of the Canucks’ six-game homestand.
Uncategorized
Recent articles from David Quadrelli