The Canucks are already pacing for as many injury troubles in 2021/22 as they had last year (and every other year, too) By Stephan Roget
1 year ago
If Vancouver Canucks fans are tired of one thing, it’s injuries being trotted out year after year as an excuse for the team’s performance.
And if Vancouver Canucks fans are tired of two things, it would be injury excuses and the litany of injuries themselves that the team seems to face on a yearly basis.
But, tired or not, the reality of the situation cannot be denied. Whether it comes down to an excessive travel schedule, poor conditioning, bad luck, or some combination thereof, the Canucks do seem to suffer more annual LTIR time than the average NHL club. That’s been the case for essentially the entire modern era of the franchise, with the Canucks posting the most man-games lost (terribly outdated term) from 2010/11 through 2021, with an average of more than 300 per season.
And the situation doesn’t appear to be getting any better in 2021/22.
Last season, the Canucks lost a grand total of 278 games of service across 56 games, for an average of 4.96 missing players per game. If one reasons that Justin Bailey was a call-up, and thus his 39 injured games shouldn’t count against the total, the Canucks sit at 239 man-games lost and an average of 4.27 per game. The Chicago Blackhawks paced the league with 348 total.
In terms of dollars missing per game, the Canucks ranked 11th according to HockeyViz, but it was actually even worse than that in practice. 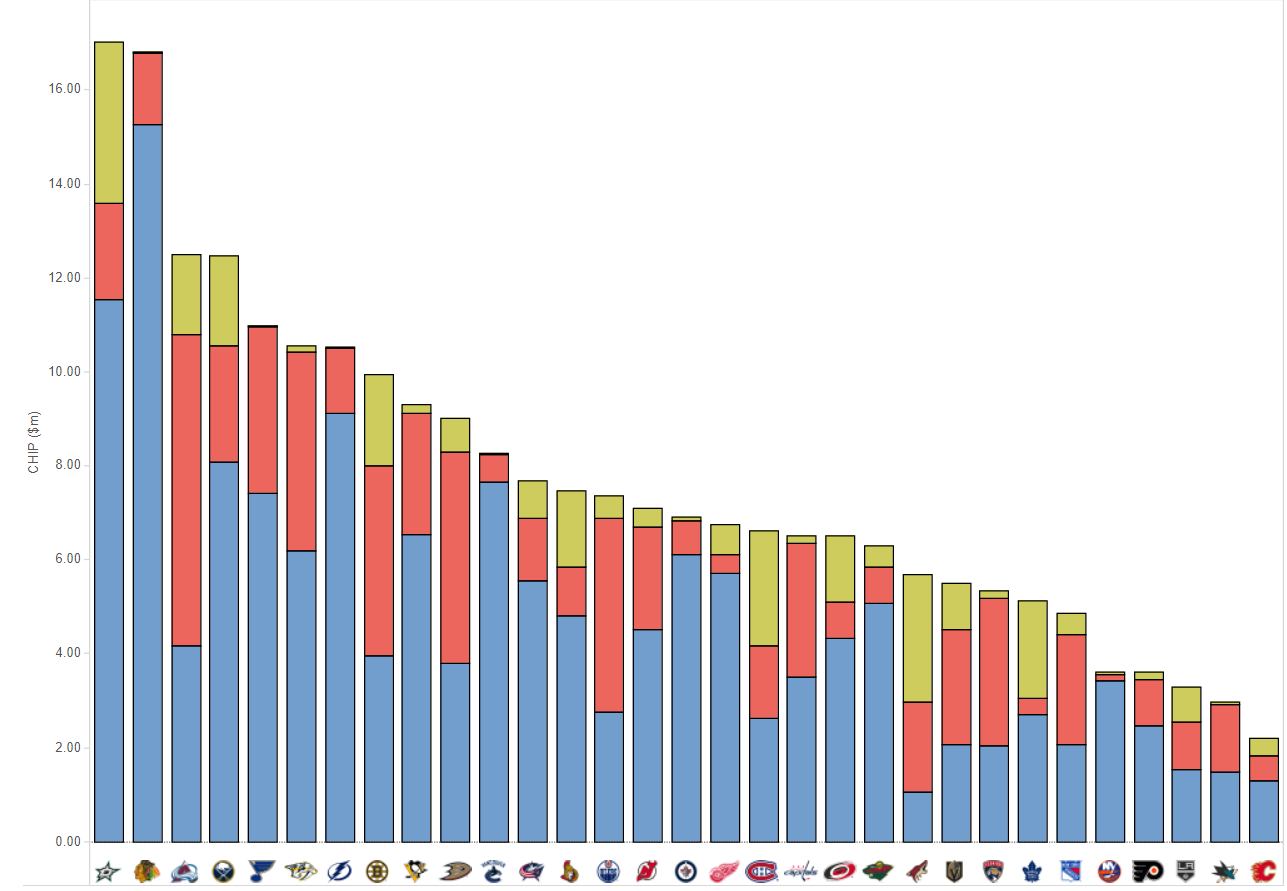 From HockeyViz
It doesn’t, for instance, count any of the instances in which the team had entire games postponed due to a COVID-19 outbreak, nor does it count any of the on-ice recovery time spent by the team thereafter.
It also doesn’t truly take into account the impact of losing Pettersson for 30 games, as his salary was relatively low last year.
Injuries and illness weren’t the only things that the Canucks suffered through in 2021, nor were they the sole reason for the Canucks’ lack of success. But they absolutely were a factor in the team finishing last in the North Division, and that doesn’t necessarily bode well for 2021/22.
The situation isn’t any worse this season, but it isn’t any better, either.
Through eight regular season games thus far, the Canucks have lost a combined 33 player games. That’s a pace of 4.125 per game, and has them on pace for an 82-game total of 338, well above their already-high average over the last decade.
And if Travis Hamonic were to be counted among this number, as he maybe should be, the rate is up to 5.125 per game, which is just silly.
Micheal Ferland has missed all of the games, as he did last year. So have Tyler Motte and Brandon Sutter.
Brock Boeser and Quinn Hughes have combined for four of the absences, or about a half-man-game lost per game. That’s more-or-less the same contribution that Pettersson, a fellow core player, made last year.
The rest of the absences have been split between three important depth players in Jason Dickinson, Tucker Poolman, and Justin Dowling. Between these three, Motte, and Sutter, that’s a good portion of the Vancouver PK corps in the press box, perhaps explaining their shorthanded doldrums.
Now, word comes that Matthew Highmore will also be hitting the IR for an indeterminate amount of time, though he’s yet to miss an actual game as of this writing. That’s another penalty killer gone.
And it’s still early. Despite starting the season with a six-game road trip, the Canucks have done less per-day travelling so far than they will throughout the rest of the season, because they’ve been on the east coast. Things will get harder from here.
Ferland won’t return. Sutter might not either, and if he does, it won’t be for a while. Motte projects to be out for another week or more still. Dowling is on LTIR. No one really knows the full extent of Dickinson or Poolman’s injuries quite yet.
The Canucks’ early-season struggles cannot be blamed entirely on injuries. But it has undoubtedly been a factor, and it will inevitably continue to be. And although the team seemed to improve its depth in the offseason, what does it say that the impact of injuries is already being felt? Especially with the knowledge that, if anything, it’s only going to get worse from here as travel increases, wear-and-tear accumulates, and the intensity of the season ramps up.
At this point, there’s not much that can be done, aside from increasing the amount of rest players get between games, and perhaps even experimenting with load management. Either way, it’s clear that injury and illness will once again be something that the Canucks battle against as they try to right the 2021/22 ship.
What else is new?
Uncategorized
Recent articles from Stephan Roget