Canucks forward Alex Chiasson is no stranger to the underdog role 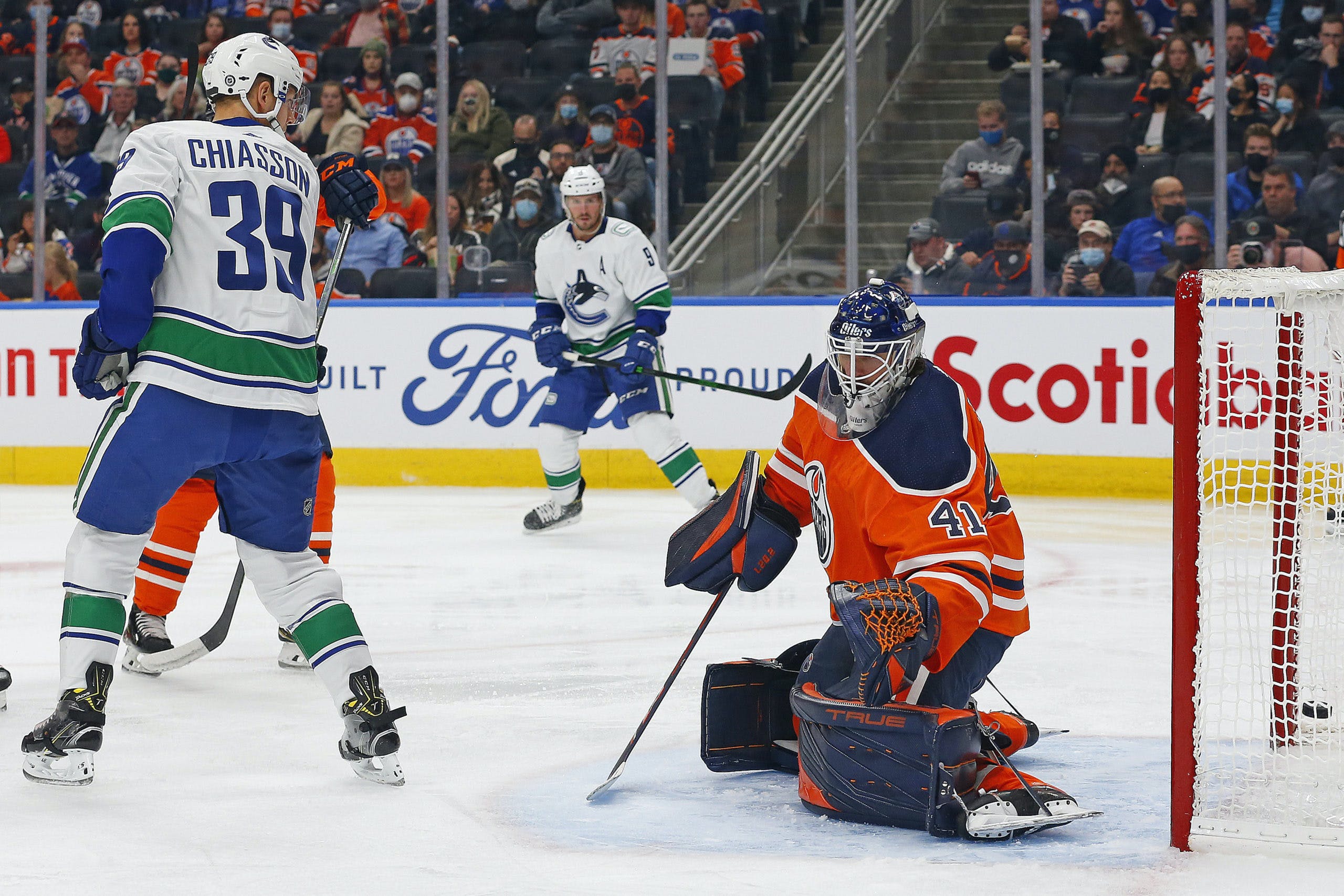 By Noah Strang
1 year ago
For Alex Chiasson, having to prove himself is not a new experience. During his 10 year NHL career, he has already played for six different franchises including four of the seven Canadian teams. While Chiasson has struggled to find a permanent home, he has carved out a long NHL career and he isn’t done yet as he signed a one-year deal with the Vancouver Canucks just before this season started worth a total value of $700,000.
Chiasson was invited to Canucks training camp on a professional tryout (PTO), an option that teams can wield when they want to get a closer look at a veteran player. Many PTOs end up going nowhere as there are so few roster spots available and teams prefer to fill them from inside the organization.
To make the Canucks’ roster, Chiasson was staring down a daunting task. The forward group is the best the team has had in years, not only because of the elite talent at the top, but also because of the impressive depth that was acquired this offseason. Not only did Canucks management add a few strong depth pieces like Jason Dickinson, but they also signed plenty of players that will be waiting in Abbotsford for a chance to get called up.
“I’m going into my 10th year in this league and this [PTO] is not the ideal situation,” said Chiasson. “But if you ask people who know me, they know I’ve had to earn it and that playing in the league is a privilege.”
If anyone was going to be up to the task, it was going to be Chiasson. Before making the Canucks he had signed two other contracts after being invited to training camps on PTOs, an impressive feat for a player who continued to beat the odds. Making these rosters despite being a late addition to these camps is no easy task and Chiasson has now done it three times in a row.
While no player wants the stress of having to try out for a roster spot every year, Chiasson has shown an impressive ability to perform in these situations. Not only has he managed to sign contracts, he’s also been a contributor and will hope to have a similar impact with the Canucks this season.

The first time that Chiasson was ever brought into an NHL camp on a PTO was in 2017 when he was invited to join the Washington Capitals. A former second-round pick, Chiasson’s career hadn’t panned out the way he had hoped as his highest point total in a season at that point was thirty-five. The Capitals were Stanley Cup contenders with their nucleus of Alex Ovechkin, Nicklas Backstrom, and Evgeny Kuznetsov, and Chiasson was given a shot to be a depth piece on the team.
While he was never a game-breaker, Chiasson did manage to exceed the expectations that were set of him and he appeared in 66 regular-season games, scoring nine goals and adding nine assists. The Capitals would march all the way to the Stanley Cup finals where they would defeat the Vegas Golden Knights who were enjoying a magical run of their own during their inaugural season. While not a crucial piece, Chiasson was someone who played in most playoff games and was a solid depth forward.
However, Chiasson’s play wasn’t strong enough for the Capitals to keep him and he once again became a free agent. When he failed to sign a contract that offseason, he accepted a PTO from the Edmonton Oilers and packed his bags for Alberta. Chiasson was still regarded around the league as a depth piece that could bring his Stanley Cup experience to a young team. Once again, he played too well in training camp and preseason for the Oilers to cut him and he earned a spot on the everyday roster.
When the Oilers extended Chiasson an official contract after his PTO, they didn’t know how much of an impact the Quebec native would make that season. He meshed perfectly alongside the Oilers’ superstars on their first powerplay unit as he parked himself in front of the net, cleaning up loose rebounds and tipping shots past opposing goalies. He finished the season with 22 goals, including 9 on the powerplay, and showed an ability to play alongside talented players.
Chiasson was rewarded for his excellent season with a two-year contract worth a total of $4.3 million. While he wouldn’t be able to replicate the same success over the next two years as he did during his inaugural year with the Oilers, he still managed to be a contributor, especially on the powerplay.
This season, Chiasson was invited to Vancouver and was good enough that management risked sending both Jonah Gadjovich and Zack MacEwen through the waivers process, where they were both claimed. Chiasson ticks a few of the boxes that NHL teams look for, including plenty of experience in the league, a Stanley Cup ring, and a willingness to go to the dirty areas on the ice. The Canucks are hoping that he can make a similar impact as to what he did his first year in Edmonton and they’re willing to give him all the opportunity in the world to do so.

What Chiasson can bring to the Canucks

Through the first couple of games of the new season, we have seen Chiasson play on the first powerplay unit as well as next to Elias Pettersson and JT Miller on the top line. It’s clear that Travis Green really values his ability to play the net front role on the powerplay.
“[playing on the powerplay] is an art and you can say ‘go to the net and stand in front’ but there’s timing to it and also a courage part,” said Green to the media after Chiasson signed.
When Brock Boeser returns to the lineup it’s likely that Chiasson will be bumped off the first unit, but he can still provide a spark for the second unit. The Canucks have not had a balanced powerplay attack in recent years, relying heavily on their top players to score, but their improved depth should allow them to ice two units that can both put the puck in the back of the net. Chiasson is 6’4 and weighs 208 pounds, making him a big presence to move out of the crease.
“Alex is an established veteran who plays a physical game and brings a valuable net-front presence to our team, particularly on the power play,” commented general manager Jim Benning. “He’s a bigger player that doesn’t shy away from the tough areas of the ice and has fit in well with the rest of our forward group so far.”
While it remains to be seen how large of a role Chiasson will play when the Canucks have their full roster, at the very least he can be a solid tweener between Vancouver and Abbotsford. He has continued to display resilience throughout his NHL career, and with how the Canucks’ season went last year, that’s definitely a sought-after trait. For now, Chiasson will get a chance alongside the most talented players on the roster. If he manages to perform up to his full potential, he will never need to feel the stress of a PTO ever again.
What do you think about the addition of Chiasson?
Uncategorized
Recent articles from Noah Strang