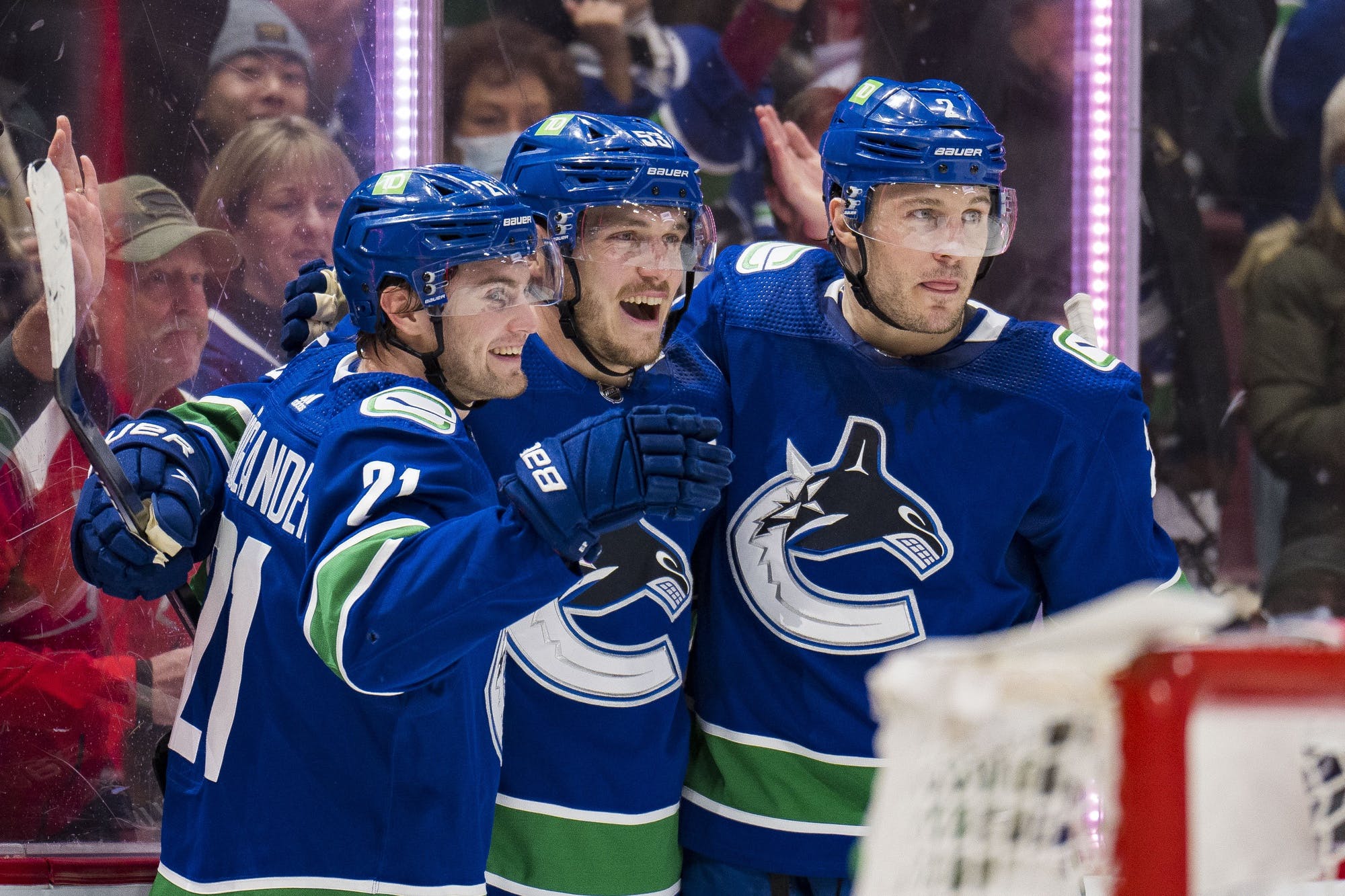 By Faber
2 months ago
Welcome to scenes from morning skate brought to you by NHL betting site Betway!
With Tanner Pearson out 4-6 weeks after surgery on his hand, and a big Saturday night game in Toronto on the horizon, the Vancouver Canucks are shaking up their lines in Toronto.
Bruce Boudreau chose to make changes throughout his lineup and gave us much different looking forward lines while also making moves on the backend as well.

A change in lines

We will start with the forward lines, as Iain MacIntyre of Sportsnet reported a lot of changes to how the Canucks will assemble their attacking 12.
Let’s start with the top, where J.T. Miller will be staying in the middle with Ilya Mikheyev and Brock Boeser flanking his wings.
Miller has definitely had his problems in the middle this season but he and Boudreau seem adamant that they want to make Miller in the middle a thing. Mikheyev has been pretty solid this season and will bring a new set of skills to round out the Boeser-Miller duo.
Mikheyev may be off to play with six and nine but the nice chemistry between Andrei Kuzmenko and Elias Pettersson is staying intact. That duo will be joined by Nils Höglander, who scored a goal and was one of the better players in the Canucks’ 5-2 loss to the Montreal Canadiens.
Taking Mikheyev off of the Kuzmenko-Pettersson line is not surprising but could have effects on the play in their own zone. As a trio, that line has been on the ice for eight goals scored and only three against in 67:46 of ice time. When Mikheyev is not on that line, Kuzmenko and Pettersson have seen only two goals find the back of the net while being scored on four times. Höglander is not likely to add to the defensive side of the game more than Mikheyev, so the young Swede will need to be impactful in the offensive zone to cover the drop-off in the defensive zone.
Höglander is being given a great opportunity here and will need to step up.

As for the third line, Bo Horvat will have Vasily Podkolzin and Conor Garland on his wings. Horvat is second in five-on-five points on this team while Garland sits in eighth with a goal and four assists. Podkolzin brings some size and aggressiveness to this line but has not been a great producer of offence this season — with only two assists through 13 games.
This trio is going to have to work hard to have success but Podkolzin and Garland are both sneaky playmakers at five-on-five and should help Horvat continue his scoring ways.
As for the fourth line, there’s no surprise here. Dakota Joshua will likely draw back into the lineup tomorrow after his first healthy scratch on Wednesday. Joshua will join Nils Aman and Jack Studnicka on what has looked like a solid NHL fourth line this season. Joshua is one of only six Canucks with more than one goal at five-on-five this season and has surprised us with his playmaking ability in a fourth-line role.
The key for this fourth line is energy, and you bet they will be fired up for Saturday night in Toronto.
Now to the defence corps, where we have some big changes in the pairings…
Quinn Hughes is skating with Tyler Myers on a top pairing and that is going to be concerning, to say the least.
Hughes just works fine with Luke Schenn and sure, it’s interesting to try something new there, but it just feels like Bruce Boudreau needs to shake something up with his team. Myers’ big defensive gaffes could end up costing the Canucks, but he has shown signs of making improvements in his own zone lately, so maybe this will work.
BIG maybe.
Oliver Ekman-Larsson will be back with Ethan Bear — this is a pairing that hasn’t looked bad together this season in their small sample size.

I think there might be something here with this duo. I’m not sure what it is just yet but I’m not so worried about them.
As for the third pairing, we’ve moved our efforts from #FreeRathbone to #PlayBurroughs.
Riley Stillman skated with Schenn on the third pairing on Friday.
Stillman has not shown enough to play over Kyle Burroughs. I guess the coach is hoping that Stillman is going to have made improvements to his game after being sat out of the lineup but it is quite surprising that Burroughs isn’t getting a chance here.
We worry about the puck-moving ability of the Stillman-Schenn pairing. It’s fine when Schenn is with a player like Hughes because he typically gets a lot of space created for him from Hughes’ ability to skate with the puck but Stillman doesn’t provide that cushion for Schenn.
That pairing could be in trouble, and we hate that for Schenn.

It doesn’t matter what was said right now.
Talk is cheap with this team at this point in the season and the Canucks need to show up big on Saturday.
The hockey world will be watching and this game could quickly become the straw that breaks the camel’s back of this core. The Canucks need to show up or get blown up as the core group is showing that it simply is not good enough.
Puck drop is scheduled for Saturday, minutes after 4 PM pacific time. You can catch the game as the marquee game on Hockey Night in Canada and we will have you covered with a big Saturday night Stanchies post game report!
Editorials
Recent articles from Faber