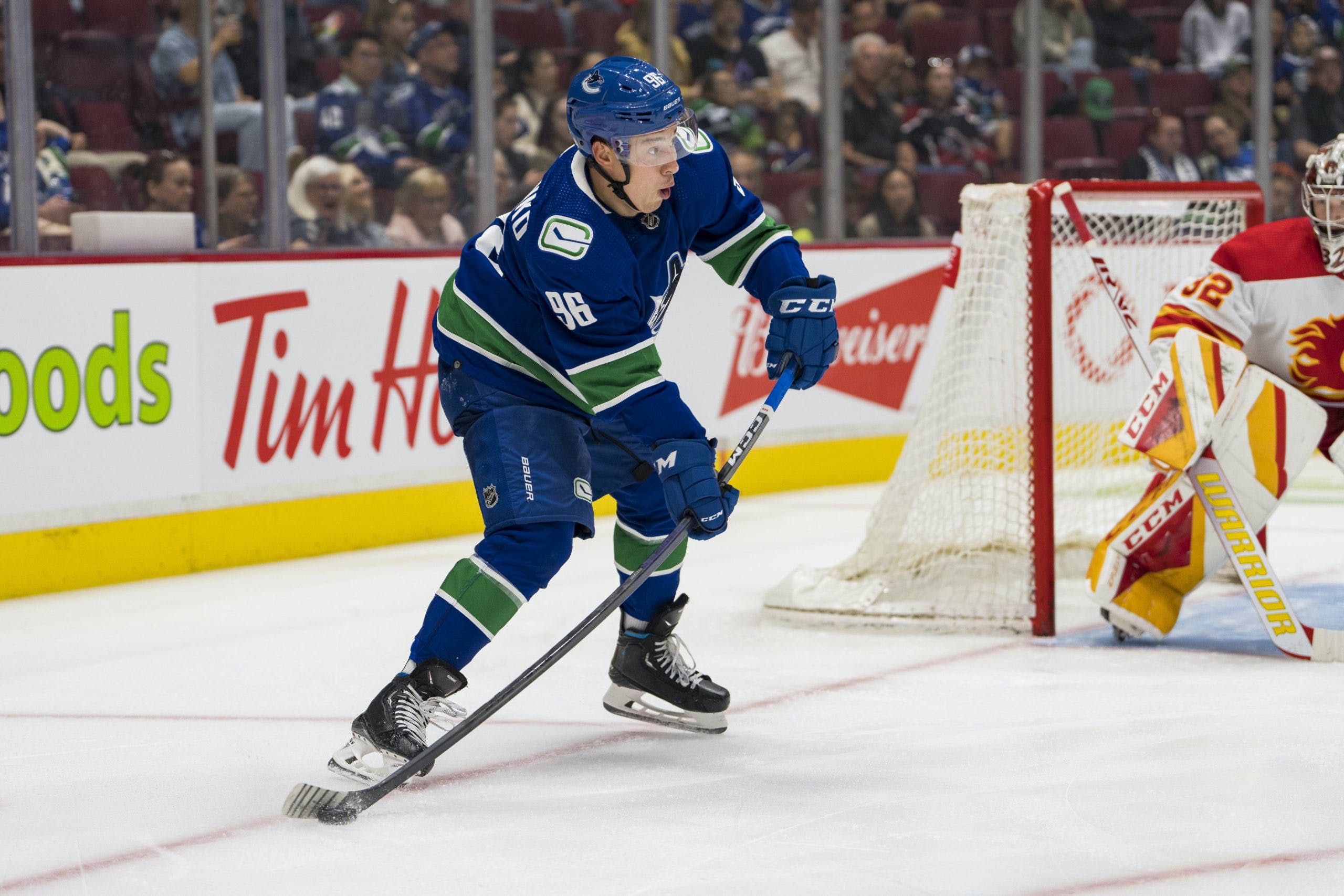 By Noah Strang
4 months ago
The Canucks recently announced that Brock Boeser underwent successful hand surgery and will need 3-4 weeks to recover before resuming hockey activities. This is devastating news for Boeser who had a difficult season last year as he dealt with injuries and personal issues but appeared destined to start this season on fire.
While the injury is a tough pill to swallow for Boeser — and his teammates as many were excited to see what the forward would do this year — it does provide an opportunity for some other players on the roster to seize a larger role. The Canucks have their deepest forward group in years and when everyone’s healthy, there’s talented players stuck on the outside looking in.
Namely, wingers Nils Höglander and Andrey Kuzmenko will now get larger opportunities to begin the season. While the unlimited number of possible forward lines means that it remains to be seen how Boudreau deploys his forwards, the absence of Boeser — and potentially Ilya Mikheyev — leaves some questions to be answered.

What this means for Andrey Kuzmenko

Andrey Kuzmenko’s first game action in a Canucks jersey went about how you would expect. There were lots of positives — as well as some things to work on — that can be taken from Kuzmenko’s performance against the Calgary Flames. He even managed to pick up a secondary assist on the tying goal late in the third period.
“There will be an adjustment period for him. Could be one month, could be one year. He’s highly skilled but was trying to do too much last night and his shifts were too long,” president Jim Rutherford told Rick Dhaliwal after the game against the Flames.
Kuzmenko’s average shift length of 59 seconds was the most among all Canucks forwards. That’s just one example of a change that the forward will need to implement if he wants to see success in the NHL — a league where the shifts are typically shorter than what he might be used to in the KHL.
Kuzmenko was always going to get a big opportunity to showcase his skills. He wouldn’t have come to Vancouver if that wasn’t made explicitly clear to him. Boeser’s injury will only serve to amplify the opportunity handed to him, especially in one key area: the power play.
With no Brock Boeser, there is a spot up for grabs on the top power play unit in the net front/ behind the net position. Kuzmenko’s devastating offensive skillset — particularly his playmaking ability and ability to get a quick pass off to Bo Horvat in the bumper position — would be a great match for that position.
If Kuzmenko can develop some chemistry with that group, the sky is the limit. This would help Kuzmenko put up raw point totals, raising his value if the Canucks decide that they need to deal him at the deadline.

What this means for Nils Höglander

Nils Höglander has had an up-and-down start to his Canucks career. It was only two training camps ago that the short and stocky forward arrived in Vancouver and shocked everyone. That performance earned him a spot on the opening night roster and he would go on to have a wonderful rookie season.
However, last season, things didn’t go nearly as smooth for Höglander. His issues were only made worse when Bruce Boudreau arrived midseason. Höglander never gained Boudreau’s complete trust and found himself stapled to the bench as the season went on, a far cry from the middle-six role he was playing just a year earlier.
The additions of Mikheyev, Kuzmenko, and Dakota Joshua meant that Höglander was going to be fighting for a roster spot to begin this season. Many had him pencilled in to start the year in Abbotsford with the Canucks AHL team. However, Höglander arrived at training camp this year with that same fire he showed before his rookie season, getting props from both Boudreau and Rutherford.
“I have been really impressed, I give him a ton of credit,” Rutherford told Dhaliwal. “If he is playing better than someone else, he will get in the lineup. It has to be a fair system.”
The injury to Boeser means that Höglander is all but guaranteed to start the season with the big club. It’s been made clear that every spot will need to be earned and this injury to Boeser may be the opportunity that Höglander needs to show off his game and earn his way back into the top nine.
Editorials
Recent articles from Noah Strang