Brock Boeser was one of the few Canucks to take a real step forward: 2021 year in review 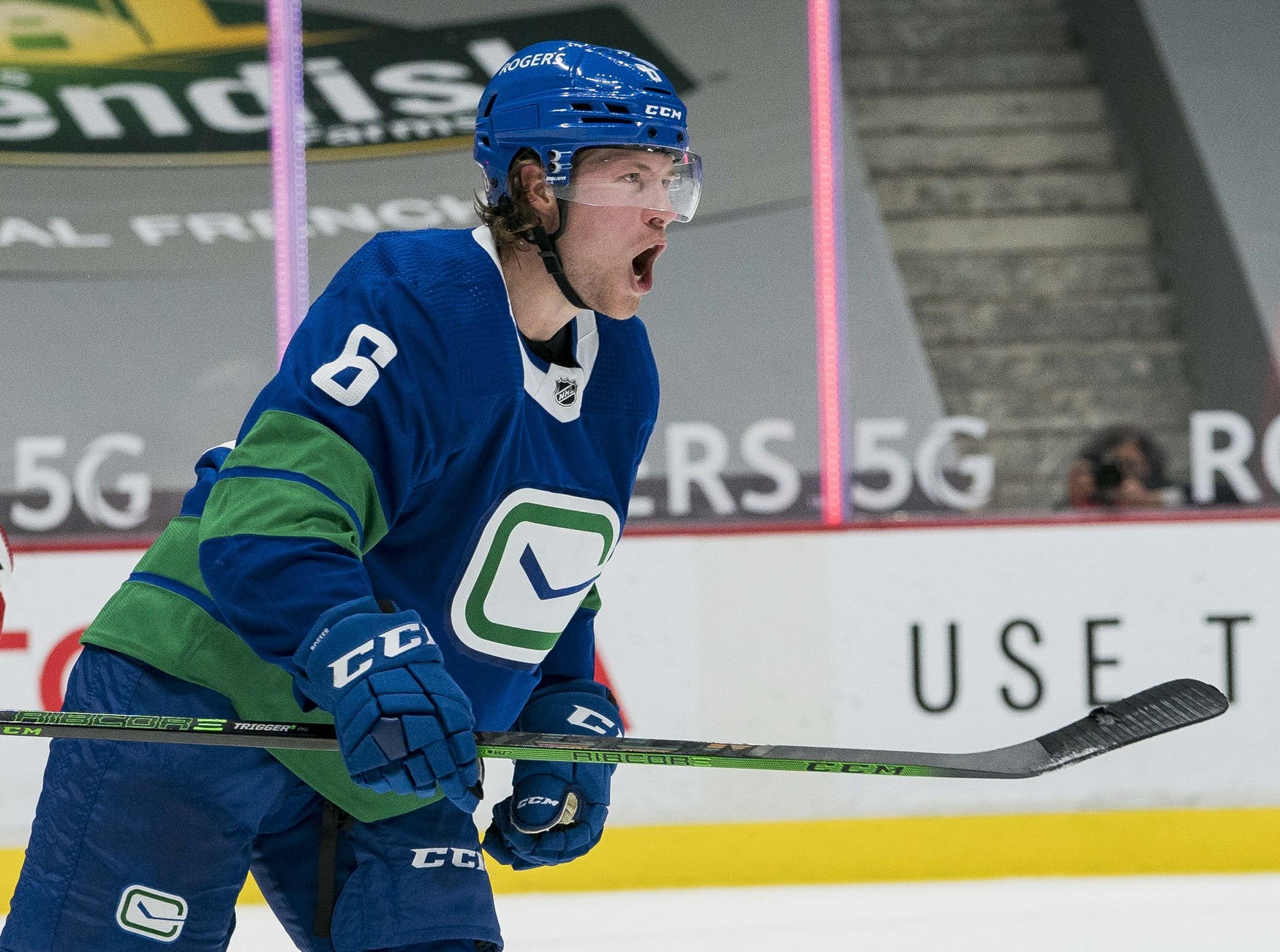 By Stephan Roget
1 year ago
We’re not sure if you noticed, but the 2021 season was a tough one for the Vancouver Canucks. Not only did the entire team experience a harsh comedown from one win away from the Western Conference Finals to last place in the North Division, but so did most individual players. Almost everyone who had been on the roster for 2019/20 regressed to some extent in 2021, with a few notable exceptions.
And of those exceptions, Brock Boeser was clearly the most notable.
Though Vancouver fans voted Bo Horvat as the recipient of the Cyclone Taylor Trophy, we here at CanucksArmy spent most of our time debating the MVP merits of Boeser and Thatcher Demko. Either would have made a fine choice, and it’s definitely fair to say that the Canucks would have been even worse off this season  — if that’s even possible  — if not for Boeser’s considerable step forward.
We’ll start our retroactive Boeser-themed journey with a look at the raw numbers.
From NHL.com
Right off the bat, it’s hard not to frame this season as a major bounceback for Boeser. He scored seven more goals and four more points than he did in 2019/20 while playing one fewer game. Even without context, that’s noteworthy, and we’ve got heaps of context coming to paint an even more impressive picture.
It goes without saying that Boeser led the Canucks in both goals and points, edging out JT Miller by three on the latter (though Miller did play three fewer games.) League-wide, Boeser was tied for 19th overall in goals and held 29th overall in points outright. Had he picked up just three more goals, he would have cracked the league’s top ten.
A look at Boeser’s career averages through his prior three seasons and change shows, however, that this wasn’t just a bounce back, but instead genuine progression.
From Hockey-Reference.com
Boeser improved on his per-game stats across the board, while only picking up an additional 46 seconds in average ice-time, which meant that his per-60 numbers stayed steady.
In a full season, Boeser would have been on pace for about 34 goals.
His sizeable uptick in shooting percentage might have some worrying about puck-luck and possible regression, but it’s not quite as stark a difference as it looks. Boeser shot at 16.2% in his rookie season, 12.4% the year after, and all the way down to 9.5% in 2019/20. So, again, it’s really more of a comeback than an uptick, and it’s reasonable to expect his shooting percentage to remain in the early-to-mid-teens for the foreseeable future.
There’s lots to be said, too, about how exactly Boeser scored all those goals.
Micah Blake McCurdy’s visual shot-tracking shows a player who pretty well shot and scored from everywhere in 2021. At five-on-five, he scored from the high-slot, from the right-side faceoff circle, and from right in front of the net. He peppered goalies with attempts from all over the place. 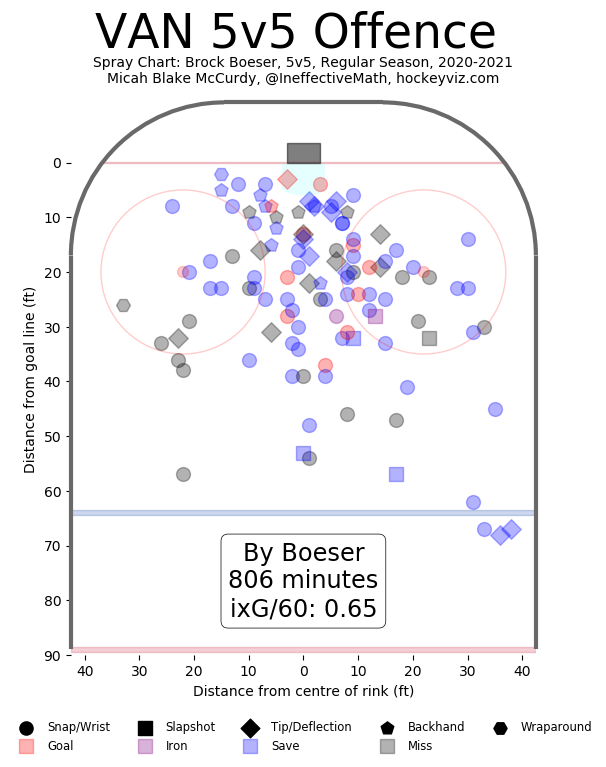 From HockeyViz.com
On the power play, Boeser used to have his “spot,” but he’s become a far more multifaceted threat on the man advantage. Of his eight power play goals, only two came from his usual office at the top of the left faceoff circle. Two more came from down-low on the same side, and four came from the net-front, where Boeser’s tip-in game has come leaps and bounds. He even saw action on the point at times. From HockeyViz.com
Of course, as we all know, there’s a lot more to hockey stats these days than goals and assists.

From NaturalStaTrick.com (even-strength)
Here, without context, Boeser’s numbers might look a little disappointing. His possession and chance-related metrics were the lowest they’d been since his rookie year, though not to an excessive degree. It’s worth mentioning, however, that this is probably the worst edition of the Canucks that Boeser has played on, and that his analytics look perfectly fine in comparison to his teammates.
His Corsi, for example, ranked fourth among regular Vancouver skaters, trailing just Elias Pettersson, Nils Hoglander, and Quinn Hughes.
It’s also important to note here that Boeser faced the toughest matchups of his career, and a quality of competition over-and-above the league average for a player of his stature. 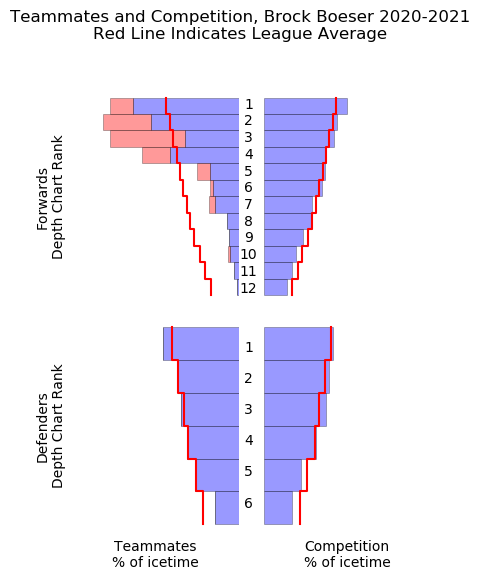 From HockeyViz.com
Given all that context, it’s tough to frame Boeser’s slight decrease in possession metrics as anything other than a change in his quality of opponents and teammates. If anything, Boeser’s two-way game and defensive play improved in 2021, and the ol’ eye-test bears that out, too.
Boeser’s production was incredibly consistent throughout the season, with his PPG shifting only slightly from quarter-to-quarter. That’s especially worthy of discussion because Boeser’s own playing situation varied wildly throughout 2021, particularly when it came to linemates. 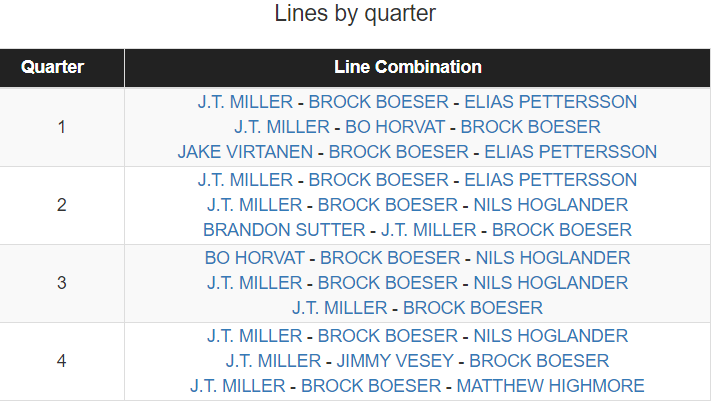 From Dobber’s Frozen Tools
Yes, we’ve gone this long without mentioning it, but it’s time. Boeser accomplished much of what he did in 2021 without his linemate/bestie Elias Pettersson by his side. Pettersson played only 26 games this season, and even then he and Boeser were kept apart for shifts and games at a time.
Boeser lined up on the wing for considerable minutes with three different centers in Pettersson, Miller, and Horvat, and produced consistently alongside each of them. His most frequent linemates this year were the oft-embattled Miller and the rookie Hoglander, and still he made it work.
We’re not suggesting that there’s anything wrong with either player, or that Boeser suffered for having to hit the ice with them. What we are suggesting, however, is that Pettersson is a better linemate for Boeser than either of them, and thus we can presume that Boeser’s performance in 2021 would have looked even better had Pettersson stayed healthy.
But enough about what linemates could have done for Boeser. Let’s talk about what Boeser did do for his linemates.
Once again, McCurdy’s visual stat mastery allows us to easily see the impact Boeser had on his teammates. Nearly everyone who played significant minutes with Boeser performed better with him  — both offensively and defensively  — than they did without. Hoglander is the one exception of note, but the margins are slim there and that’s likely nothing more than a statistical anomaly. 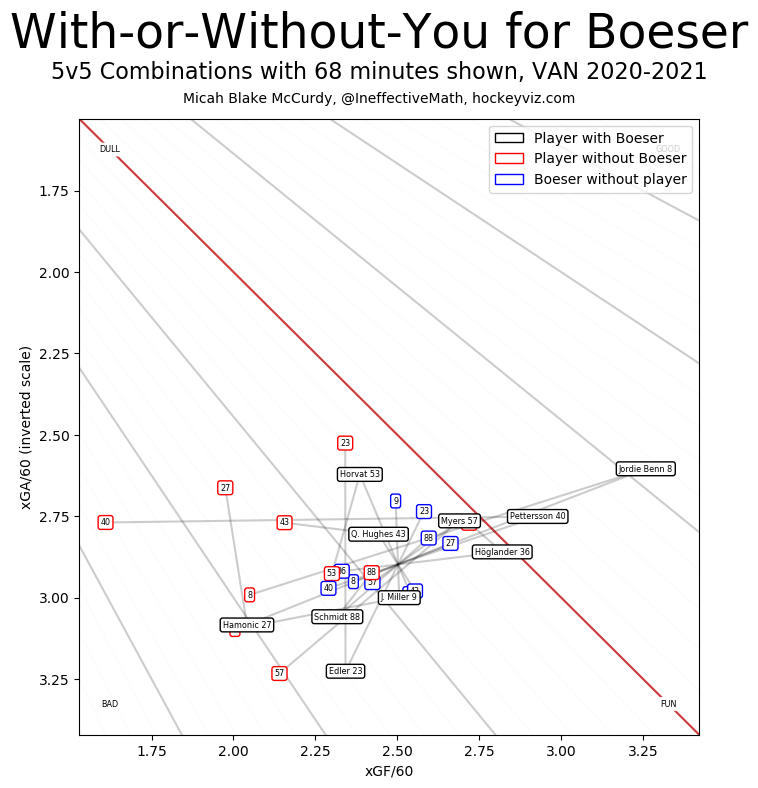 From HockeyViz.com
Point-blank, Boeser made his linemates better across the board.
As we dive back into NaturalStatTrick’s hard numbers, that truth becomes even more apparent.
Boeser and Pettersson played best when they played together and worse apart, but Pettersson absolutely cratered without Boeser. When together, their xGF was 54%, more than 10% higher than the team’s average without them on the ice. Apart from Pettersson, Boeser dipped down to a hair above the average, but Pettersson dropped all the way down to 35.69% without Boeser.

From NaturalStatTrick.com
The same is true of JT Miller. Boeser’s xGF was actually higher without Miller, but Miller’s sank by almost 8% without Boeser.

From NaturalStatTrick.com
There’s definitely a pattern there, and it seems like a natural place to wrap this Year in Review up.
Boeser got better this season and made his linemates better, despite having about a million reasons to do the opposite: COVID and the difficult schedule that followed, losing Pettersson halfway through and thus taking on more defensive attention, skating a tougher deployment, and a general downtick in the quality of his teammates.
Brock Boeser isn’t just fine, he’s damn fine, and if the rest of the team can improve around him, we can probably expect to see his game take yet another step forward in 2021/22
Or, in other words: the Boes is yet to come.
Uncategorized
Recent articles from Stephan Roget