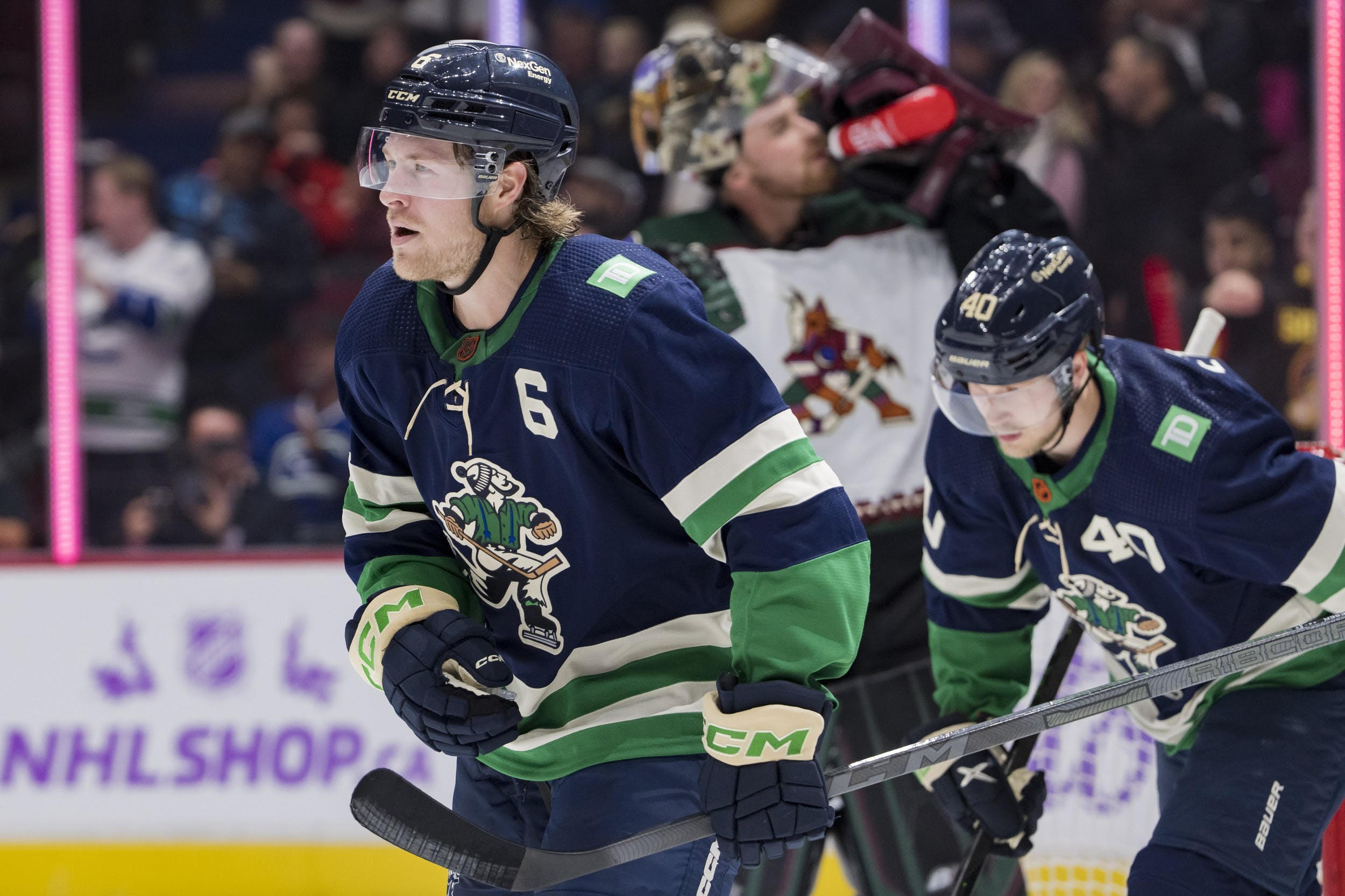 By Lachlan Irvine
2 months ago
Welcome back to Instant Reaction — the series at CanucksArmy where we give our instant reaction to the game and ask our readers to give theirs in the comments section below! Cody Severtson is writing The Stanchies tonight, and those will be posted later tonight. The Statsies — CanucksArmy’s analytics-based post game report — will be posted tomorrow morning.
Whenever the Vancouver Canucks and Arizona Coyotes link up, you expect a slow, sloppy, low-scoring affair with mistakes galore. Neither team disappointed, but the Canucks came out on top by the skin of their teeth with a 3-2 overtime victory thanks to two goals by Bo Horvat (including the game winner).
There was plenty of intrigue leading up to tonight’s matchup. How would Spencer Martin handle a bonafide starting role the absence of an injured Thatcher Demko? How would the Canucks respond to Brock Boeser being labelled as a healthy scratch? And how would the team look against a rebuilding, but overachieving Coyotes club?
We got the answers to all of those questions tonight. Well, sort of.
Dakota Joshua was slated to make tonight’s roster while Boeser took a seat in the press box on Hockey Fights Cancer night, an initiative near and dear to Boeser’s heart after the passing of his father, Duke.
Fast forward to about an hour before puck drop, and Elliotte Friedman drops a bombshell on Hockey Night in Canada that Boeser’s agent has been given permission to seek out trade options for the winger.
Once the warmup began, Boeser was out on the ice skating on the third line with Sheldon Dries and Conor Garland. Joshua was not, due to an injury sustained in the morning skate.
Sure enough, in a moment of pure perfection, Boeser scored the tying goal late in the third period.
Brock acknowledged how important the moment was for him post-game. “It’s a very important game for me and my family and one I had on the calendar. And you come in and you’re not on the whiteboard, it hurt hard and it hurt bad,” Boeser said.
“As soon as I got the call I knew it was a moment that everything happens for a reason. I knew I needed to make the most of it.”
If Brock’s night was something out of a movie script, a lot of his teammates forgot to read most of their lines. The Coyotes ran roughshod in the Canucks’ end for large portions of the second and third periods, with Vancouver mustering only 15 shots in the final 40 minutes of regulation.
Luckily for Bruce Boudreau’s squad, Arizona was just as futile as they were. The Yotes ended up with only 23 shots, including none to the Canucks’ five in overtime, and gave up a crucially dumb too-many-men penalty that led to Bo Horvat’s overtime winner.
Spencer Martin stood on his head in his first official game as Canucks’ starter. His 22-save performance saved the Canucks from a worse fate, including a crucial save on Lawson Crouse in the first.
Overall, the Canucks made their chances count when they got them, including on a ridiculous no-goal call thanks to Arizona defender J.J. Moser knocking his own net off.
It wasn’t a pretty win by any stretch of the imagination, but the points count the same anyway. The Canucks play next on Monday when the Montreal Canadiens roll into town.
While we wait for Cody Severtson to finish up a great new Stanchies, let us know what you thought of tonight’s game in the comments below!
Editorials
Recent articles from Lachlan Irvine