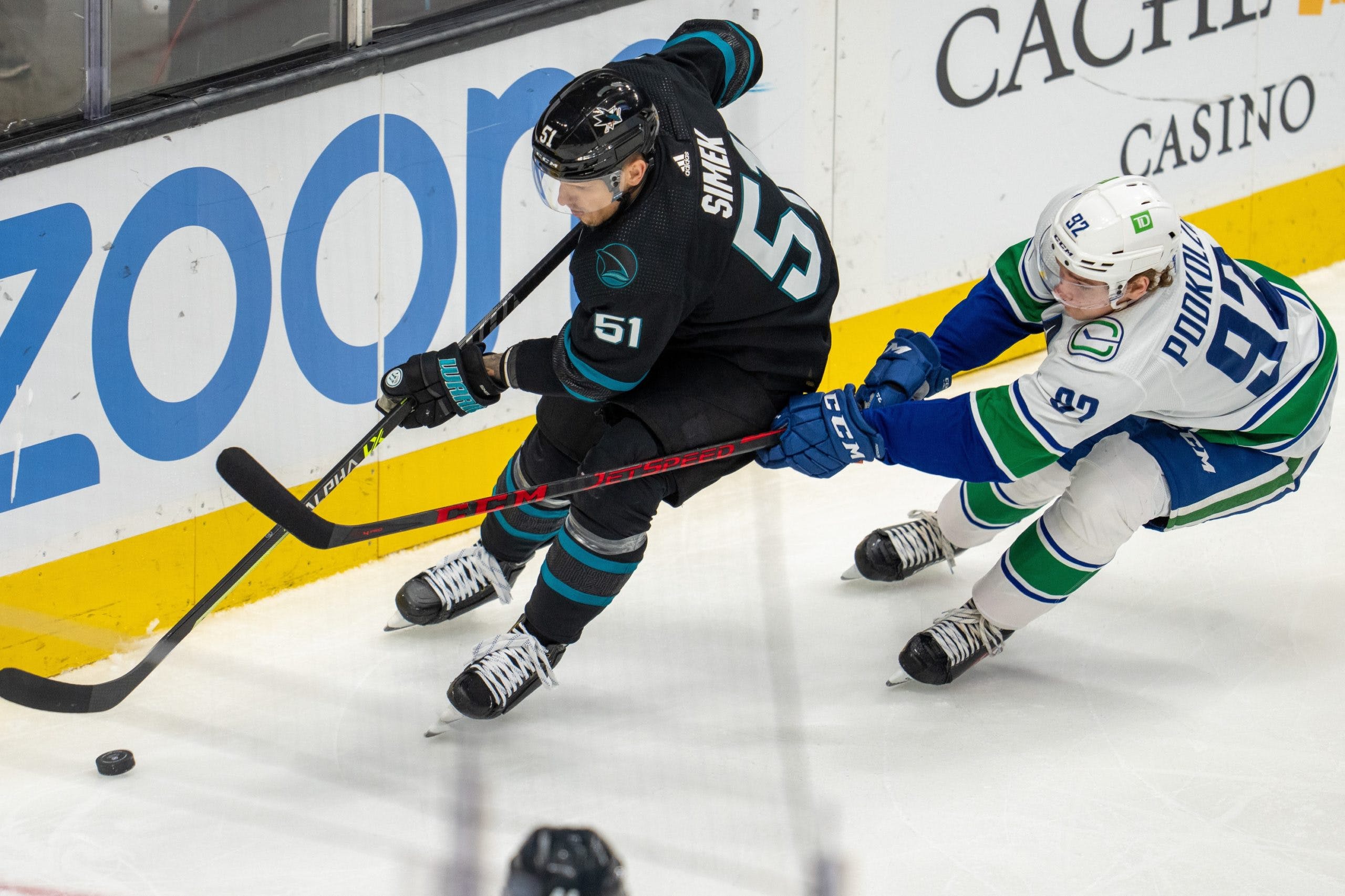 By Stephan Roget
1 year ago
It’s late December, and the Vancouver Canucks are on hiatus until at least Boxing Day.
That leaves us without an awful lot to talk about in what was already a traditionally slow time of the year in the sports media world.
But it does provide a unique opportunity to assess the Canucks’ place in the NHL standings while those same standings are on pause — and that’s a topic that Vancouver fans are a lot happier to discuss than they were a few weeks ago.
As of this writing, the Canucks sit seventh in the Pacific Division, 13th in the Western Conference, and 22nd in the league overall with their 30 points and 14-15-2 record. It’s no secret that, should they wish to make a run at the 2022 Stanley Cup Playoffs, the Canucks are facing an uphill climb.
How uphill? Well, that depends on the teams holding down spots ahead of them.
Strength of Schedule ratings courtesy of Tankathon. All statistics current as of noon on December 20, 2021.

Strength of Remaining Schedule: 1.107 SOS (22nd hardest)
X-Factors: The biggest x-factor for the Golden Knight is undoubtedly the impending arrival of Jack Eichel from the LTIR. Does he boost the team’s success rate or cause enough disruption to be counterproductive? Chances are, it’s the former. A culture shift has gone on in Vegas in recent years, with the departure of key voices like Nate Schmidt, Marc-Andre Fleury, and Ryan Reaves. that could be important as the season drags on.
Four-Point Games Remaining: 3
Is It Possible?: The Canucks and Golden Knights have played the same number of times, so there aren’t any games in hand to worry about — but there are still ten points to make up. Recent history suggests that Vegas will continue their pace from here on out and, if anything, Eichel’s return to health is only going to up their win percentage. Catching the Knights is probably not going to happen.

Strength of Remaining Schedule: 1.117 SOS (15th hardest)
X-Factors: The yearly aggravating factor in Anaheim is goalie John Gibson’s health. If he goes down with an injury soon, like he usually does this time of year, then the Ducks will plummet shortly thereafter. The relative youth of the Ducks could also slow them down as the season wears on. Hot starts, like the one enjoyed by Troy Terry, are always tempered by cold streaks in the end. The Ducks, as a whole, are currently punching well above their weight.
Four-Point Games Remaining: 2
Is It Possible?: The Canucks have to make up ten points here, too, but they’ve at least got a game in hand on the Ducks. Really, these look like two teams that should soon be trending in different directions. The Canucks catching the Ducks at this point may be unexpected, but Anaheim being this far ahead wasn’t supposed to happen, either. This looks to be one of the opponents that the Canucks stand the best chance of catching up to.

Strength of Remaining Schedule: 1.090 (27th hardest)
X-Factors: Jacob Markstrom has been playing like a Vezina candidate again, but he’s also playing A LOT. An overworked Markstrom proved to be the Flames’ achilles heel in 2021, and it could be the same this year. The distraction of pending UFA and leading scorer Johnny Gaudreau could cause disruption as the end of his contract draws nearer and nearer.
Four-Point Games Remaining: 4
Is It Possible?: On the one hand, the Canucks only need six more points to match the Flames. On the other hand, the Flames hold three games in hand, so those six points could quickly turn into ten or even 12. The upside here is that the Canucks have four “four-point” matchups left to play against the Flames, so they’re largely in control of their destiny. Win all four of those games, or even just three of four, and catching Calgary becomes a lot more feasible.

Strength of Remaining Schedule: 1.080 SOS (30th hardest)
X-Factors: Same as it ever was, the Avalanche are experiencing some goaltending issues. Despite the high price paid for him in the offseason, Darcy Kuemper is struggling, and Pavel Francouz is too injury-prone to rely on. If Kuemper can’t figure it out and/or Joe Sakic can’t find someone else at the deadline, this will be a key storyline for the remainder of the year. Other recurring injuries, like Bowen Byram’s concussion issues, continue to hamper the Avalanche.
Four-Point Games Remaining: 1
Is It Possible?: Even before the disappointing start to the 2021/22 season, most Canucks fans would have been overjoyed to learn their team would be within six points of the Avalanche by this point in the year. However, all is not quite what it seems. The Avs have been underachieving, and they have an outlandish four games in hand over the Canucks. If Colorado hit their stride anytime soon, they’ll be double-digits ahead of Vancouver in no time. Chances are good the Avalanche will eventually be duking it out for the Central Division lead, not a wild card spot, so they’re not really the Canucks’ problem.

Strength of Remaining Schedule: 1.122 SOS (9th hardest)
X-Factors: The Oilers have been hit particularly hard by COVID-19, and Vancouver fans know exactly how much of an aggravating factor that can be. There’s also the question marks in the crease to consider, where Mike Smith is solid but injury-prone, and everyone else is highly-questionable. On the opposite end of that spectrum is Oscar Klefbom, who hasn’t played in more than a year but is due to return in March. He bolsters Edmonton’s depth and devastates their salary structure in one fell swoop.
Four-Point Games Remaining: 2
Is It Possible?: Six points to cover, with the Oilers holding two games in hand. That’s daunting from the get-go, as is the wide gulf in point-percentage between Vancouver and Edmonton. If we’re going to be realistic here, the presence of Connor McDavid and Leon Draisaitl alone is probably all the Oilers need to stay well ahead of the Canucks for the remainder of the season. Catching them might be a pipe-dream.

Strength of Remaining Schedule: 1.103 SOS (24th hardest)
X-Factors: A long-term injury to Blake Wheeler and the ongoing unproductivity of Mark Scheifele have put the Jets in a bit of a tough spot. Then there’s the sudden and shocking resignation of head coach Paul Maurice, which could go either way. Maybe it sparks the Jets to a resurgence, and maybe it sends them spiralling after so many steady years of Maurice at the helm.
Four-Point Games Remaining: 1
Is It Possible?: The Canucks are only three points back of the Jets, and the Jets only have a single game in hand. They’re enticingly catchable, but the Canucks only have one direct opportunity to do something about it left on the schedule. It should also be noted that catching the Jets doesn’t actually accomplish much, because they’re not in a playoff position right now either — they’re just one more team the Canucks will have to leapfrog on route to the postseason.

Strength of Remaining Schedule: 1.094 SOS (26th hardest)
X-Factors: Age is going to impact the Kings in two very different ways. Their core contributors are players like Drew Doughty, Anze Kopitar, and Jonathan Quick — all playing excellently, but all past their true prime. They could fade as the season wears on. At the other end of the spectrum are Los Angeles’ cadre of young stars, none of whom are ready to contribute on a consistent basis quite yet. The recent long-term injury to Alex Edler will have a negative impact on a patchwork blueline.
Four-Point Games: 2
Is It Possible?: The Kings have a game in hand, but the Canucks only need to gain three points on them. This one is very possible, especially with two head-to-head matchups in the mix — but, again, passing the Kings doesn’t get the Canucks into the playoffs.

Strength of Remaining Schedule: 1.131 SOS (5th hardest)
X-Factors: Of all the teams that the Canucks will be trying to pass, the Sharks have had the easiest schedule thus far — and that means they’ll be facing a very difficult slate of opponents from here on out. That’s not great news for a team that is already facing a notable distraction in the Evander Kane situation. The Sharks are also currently relying on way-better-than-expected goaltending from James Reimer, which probably isn’t sustainable. They’ve also got an ancient blueline to worry about.
Four-Point Games: 2
Is It Possible?: The Sharks are a point ahead with a game in hand, but there’s blood in the water. We’ll go as far as to say that it would be surprising if the Canucks did not pass San Jose in the standings by the time the 2021/22 season has reached its conclusion. But — stop us if you’ve heard this one before — it doesn’t make a huge difference if they do, because the Sharks are also way out of the playoffs right now.

Strength of Remaining Schedule: 1.114 SOS (17th hardest)
X-Factors: The Stars are currently living through a goalie controversy that’s complicated even by Vancouver standards, though the recent retirement of Ben Bishop certainly uncomplicates it some. With a big-ticket pending UFA in John Klingberg, the Stars are already measuring the merits of becoming a seller at the Trade Deadline — so don’t expect too much of a playoff push from them.
Four-Point Games: 2
Is It Possible?: The good news is that the Canucks have already caught the Stars in the standings. The bad news is that the Stars hold three games in hand. Still, these are two teams heading in opposite directions, so it shouldn’t be long until the Canucks are officially on top.

Strength of Remaining Schedule: 1.123 SOS (8th hardest)
X-Factors: The Canucks have some complicating factors of their own, including a questionably-constructed blueline that has been hampered by injuries, a harder-than-average remaining schedule, and the possibility of the Bruce Boudreau honeymoon wearing off eventually.
So, Are The Playoffs Possible?: Technically, yes. But are they probable? Eh, probably not. The Canucks don’t have to worry much about the Blackhawks, Kraken, or Coyotes causing them trouble from below, but they still need to catch the Avalanche or Oilers at a bare minimum, all the while leapfrogging all of the Stars, Sharks, Kings, and Jets. In other words, the Canucks need to keep winning and hope that the majority of the teams ahead of them start losing more often, too.
If you want to keep some hope alive in your heart for the playoffs, then by all means do so. Just don’t lay any money on it quite yet.
Uncategorized
Recent articles from Stephan Roget