Boeser, Miller, and Garland: Who should stay and who should go? 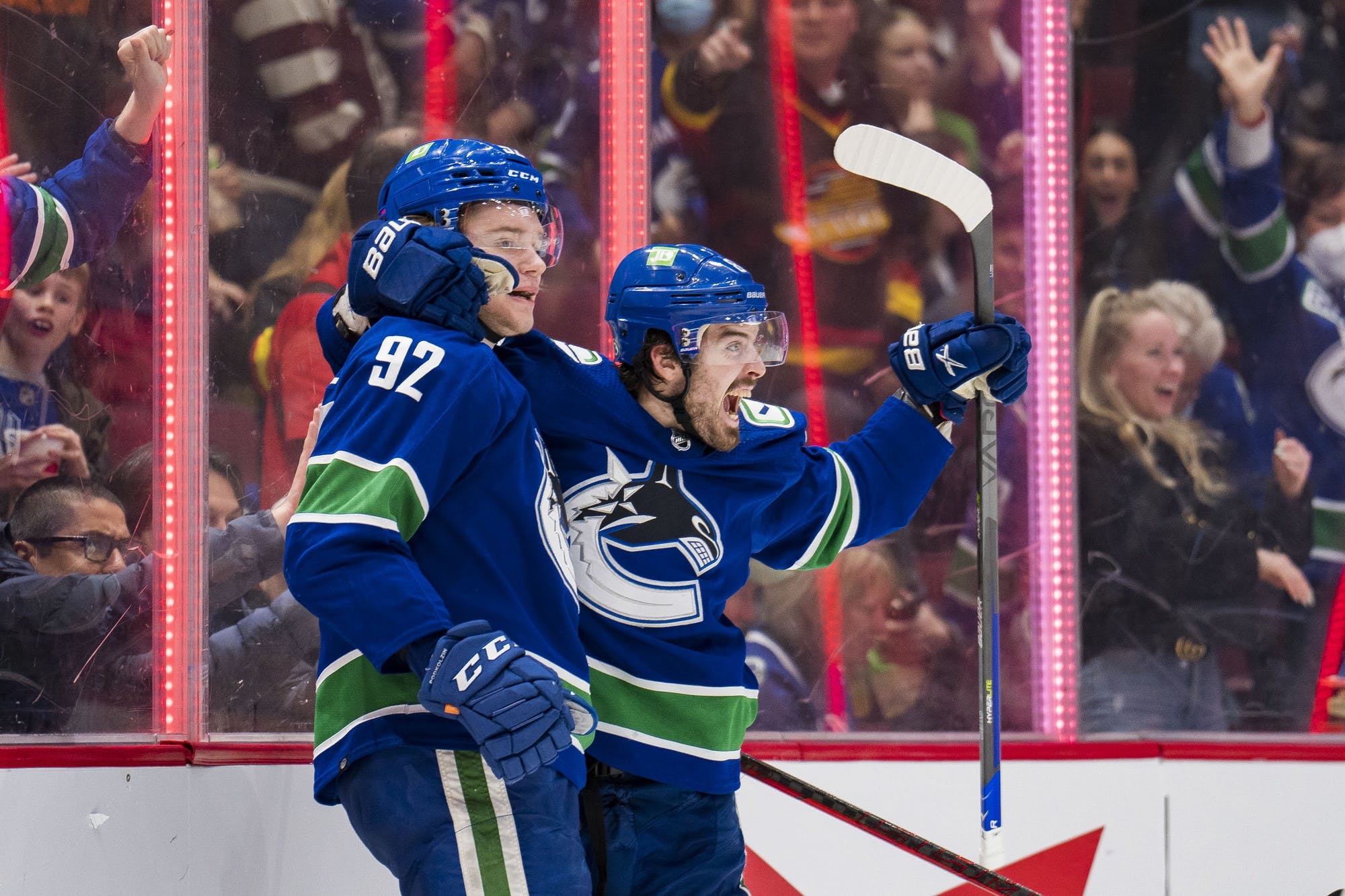 By Bill Huan
6 months ago
The discourse surrounding Canucks players seem to change as quickly and often as the weather in Vancouver.
Just a year ago, Brock Boeser was lauded for his career season while J.T. Miller drew lots of flak for his inconsistent defensive efforts and some testy on-ice moments. Fast forward to today, and Boeser’s name seemingly pops up in trade rumours daily while Miller is now considered by lots of fans to be one of the best forwards in the league.
Even a newcomer like Conor Garland has experienced such up and downs, with many criticizing his second-half struggles following a hot start to the year.
Regardless of how you view the three players, there seems to be a consensus on one thing: Not all of them can be on the team long-term. And with the club’s new management group heading into their first offseason together, it seems inevitable that at least one of these names will be moved.
So, who should it be? Let’s examine the options by looking at each forward’s production, age, and contract status.

It was really a tale of three seasons for Garland, who started the year with eight points in the team’s first six games and ended with 16 in the Canucks’ final 12 matches.
The middle portion, however, was rough. Garland only posted 28 points in 59 games from October 26th to April 3rd, a 39-point pace over a full season.
Those numbers are unacceptable for a player who some consider to be a top-line calibre winger, but a deeper dive into his stats reveals that Garland was still extremely impactful, even if his boxscore indicated otherwise.
As you can see, Garland was still very productive during his dry spell at five on five by ranking second on the team in many metrics, and his struggles were mostly caused by scoring a meagre point on the powerplay during that span.
In fact, Garland’s 2.62 five on five points per hour on the season ranked 29th in the entire league amongst players who logged at least 100 minutes of ice time, which is ahead of names such as David Pastrnak, Aleksander Barkov, and some guy called Connor McDavid.
His defensive impact was outstanding too, with opponents only scoring 2.28 goals per 60 against the Canucks at five on five when Garland played, the third-best mark on the team among players who appeared in at least half the club’s games.
As you might have already guessed, the thing that really anchored Garland’s scoring last year was his lack of power-play production and ice-time. He only averaged 1:35 minutes on the man advantage, which is about half of what Elias Pettersson, J.T. Miller, and the rest of the first unit play each game. That number was even lower than the likes of Oliver Ekman-Larsson and Tanner Pearson, and spending most of his time on the second unit didn’t help Garland’s case either.
This is a far cry from the amount of time he spent on the PP during his last year in Arizona, where he averaged 2:54 minutes per game. In fact, Garland spent almost 17 more minutes overall on the man advantage in 2020-21 while dressing in 29 fewer games.
He wasn’t an elite PP producer by any means, scoring 4.3 points per 60, which is roughly half the amount that Miller put up last year. But if a spot opened up on the first unit and Garland took advantage of it, it’s realistic to expect him to score 10-15 more points and become that 65-point — the exact pace he was on during his final year as a Coyote — winger that many had expected.
Combine that with his age (26) and fantastic contract (four more years at $4.95 million per), there’s absolutely no reason why the Canucks should consider moving Garland.

Ah, crap, here we go again. What would a Canucks season be without trade rumours surrounding Boeser?
What makes his current situation even more complicated than usual is his impending contract negotiations, which have been covered to death. Boeser’s $7.5 million qualifying offer is definitely a hard pill to swallow, but it doesn’t need to reach that point.
By all accounts, the 25-year-old has enjoyed his time in Vancouver and the Canucks seem to have done right by him too, as the team and fanbase have supported him and his family throughout his dad’s battle with dementia and previous illnesses. This level of trust could prove to be crucial during a negotiation that can easily become contentious, so it seems reasonable to expect that both Boeser’s camp and the team can find common ground before potentially heading to arbitration.
But what could a potential deal look like? The winger’s coming off arguably his worst season to date and scored at a disappointing 53-point pace, which improved slightly to 60 under Boudreau. Last year, he was the team’s most consistent player and produced at a 72-point clip, making Boeser’s Jekyll and Hyde impression all the more difficult to evaluate.
His true talent level probably lies somewhere between the last two seasons, and Boeser’s career averages tout him as a 30-goal, 65-point player, which seems pretty fair. This might sound similar to Garland, but Boeser’s underlying profile isn’t as impressive since his play-driving is much less consistent. 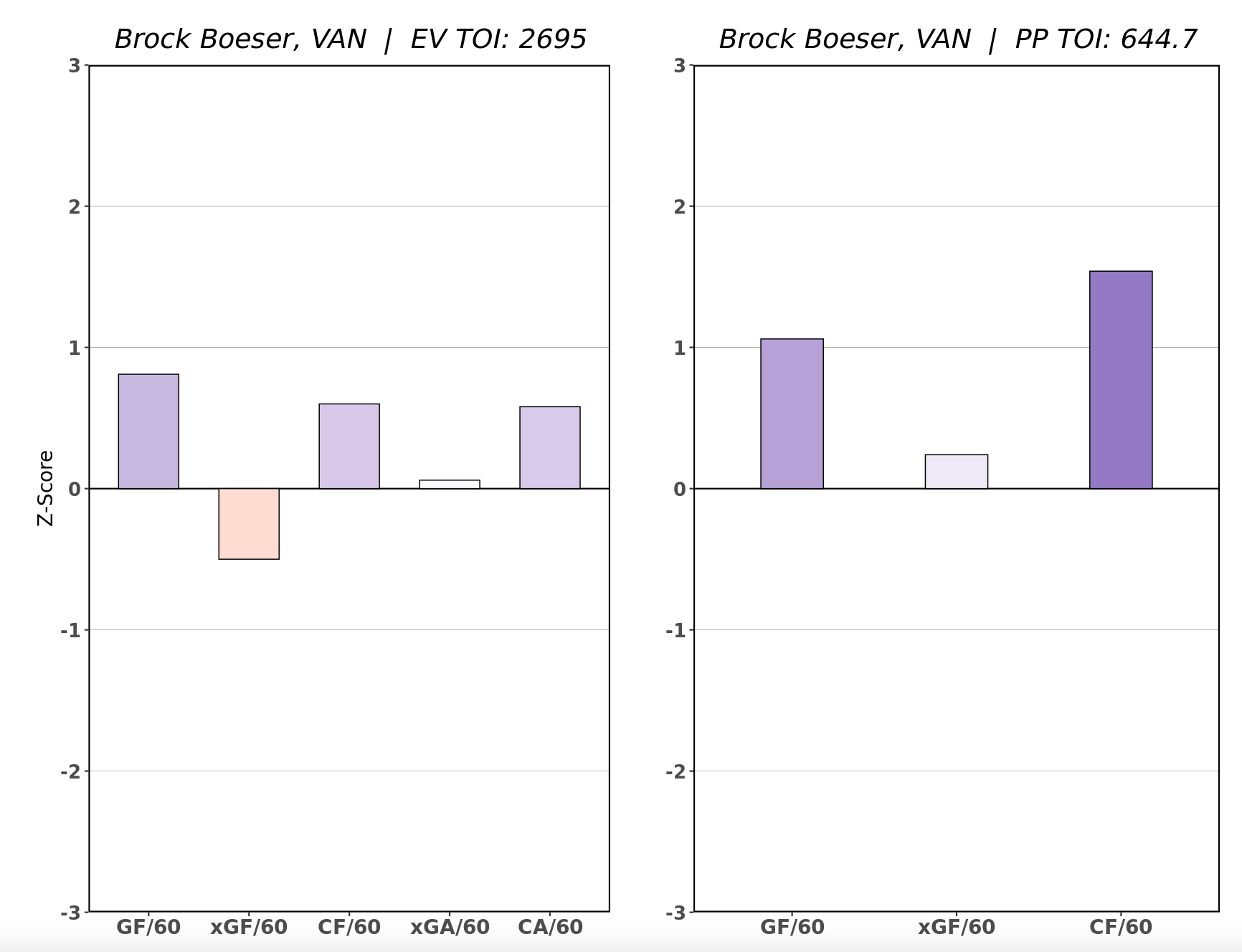 The charts above show Boeser’s even-strength and power-play impact from 2019-22, giving us a more accurate representation of his production throughout the good and bad seasons. As you can see, Boeser’s below-average expected goals figure at even-strength shows that he struggles to produce scoring chances at a high level but makes up for it with strong finishing abilities that drive his actual goals for numbers into the upper half.
Boeser’s also a good power-play producer and reliable defensive winger who limits opposing chances, which ultimately helps the Canucks have positive shots and goals shares whenever he’s on the ice. The good news is that his struggles last season were largely caused by an unsustainably low shooting percentage at five on five; Boeser converted on a nice 6.9% of his shots in 2021-22, which is a drastic dropoff from his career average of 13% coming into the year. With finishing being one of his strengths, there shouldn’t be much concern that the winger can get back to his usual level of production by scoring roughly 65 points and flirting with 30 goals.
So, there’s no doubt that Boeser’s a good top-six winger, and assuming he signs long-term, his next contract will undoubtedly be worth at least $6 million. After all, there are currently 78 forwards making that amount (hello, Loui!) and 59 making $6.5 million a year, which should be the high-end of what Boeser could net.
That might seem like a lot considering Garland’s making less than $5 million a year, but it’s important to remember that the former Coyote’s on a bargain deal and didn’t have as much leverage during the negotiations due to his more unproven track record.
Another thing to keep in mind is that Boeser’s value is at an all-time low, so even if his next contract might not be a steal, it’ll still likely be worth more than anything that the Canucks can get in a trade. The new (and improved) Trader Jim has enough experience to know not to sell low on assets, and given Boeser’s youth (25-years-old), he should be back in Vancouver as long as his ask isn’t unreasonable.

And finally, we’ve reached the Big Kahuna. Every Canucks fan knows by now that Miller’s got one year left on his current deal and extension talks will begin soon; it just remains to be seen how much his camp will ask for.
Two comparables that will definitely come up are the new contracts for Mika Zibanejad and Tomas Hertl, but Miller’s recent  production blows both of theirs out of the water:
Daily Faceoff’s own Frank Seravalli recently reported that Miller’s next deal will likely be worth over $9 million while using some, uhh, choice words that might not be exactly safe for work…
Regardless, it does seem like Miller will ask for at least $9 million, if not $9.5 million over a potential eight-year deal given that his production is on another level when compared with Zibanejad and Hertl. If he were to shorten the term, then he might even land a contract that pays him eight digits annually.
The question then becomes: is he worth all that money? Miller’s raw boxscore surely says yes, but his actual impact suggests otherwise given his below-average defensive play. The conundrum here is that Miller is a much better two-way player when he lines up on the wing, but his ability to play down the middle is one of the main reasons why he’s extremely valuable. So while his point totals indicate that he’s one of the elite players in the league, Miller’s analytics suggest that he might not be among the very best.
However, the most important component of Miller’s potential long-term fit on the Canucks has less to do with his contract and more with the team’s timeline. The best-case scenario that sees the club contending will likely still be two years away (the 2024-25 season probably being the earliest), which is when inefficient contracts such as Tanner Pearson’s, Jason Dickinson’s, and Tyler Myers’ expire. If we go by that timeline, though, Miller will already be in his age-31 season and likely on the decline.
It’s already debatable as to whether or not he’s worth $9+ million right now, so expecting a 31-year-old Miller to be worth such a contract is even more improbable. Even if he somehow finds the Lazarus Pit and continues to put up career numbers, it’s unreasonable to expect Miller to continue producing at such a high level for more than a few years, which significantly shortens the Canucks’ window given that Garland and Thatcher Demko — who are on two of the team’s best contracts — will both become UFAs in 2026.
Factoring in everything, it makes a lot more sense to trade Miller this summer, whose value is at its highest too. Dealing him will undoubtedly hurt short-term, but it’ll also give the Canucks more cap flexibility and a longer runway if they ever reach contender status, even if we’ll all miss the colourful language that he uses on the ice.

Verdict: Maximize his value through a trade

Given the age and contract status of the three players, it makes the most sense to keep Garland, re-sign Boeser, and trade Miller. In this scenario, the Canucks will be able to keep players who fit the team’s timeline better while also getting the most back in a deal surrounding Miller. The only thing to do now is to wait and see which opposing team will offer the most to acquire him.
All stats courtesy of JFresh, Natural Stat Trick, and Evolving-Hockey.
Uncategorized
Recent articles from Bill Huan