The Boeser extension is already fair value, and could become a bargain with a bounce back from Brock 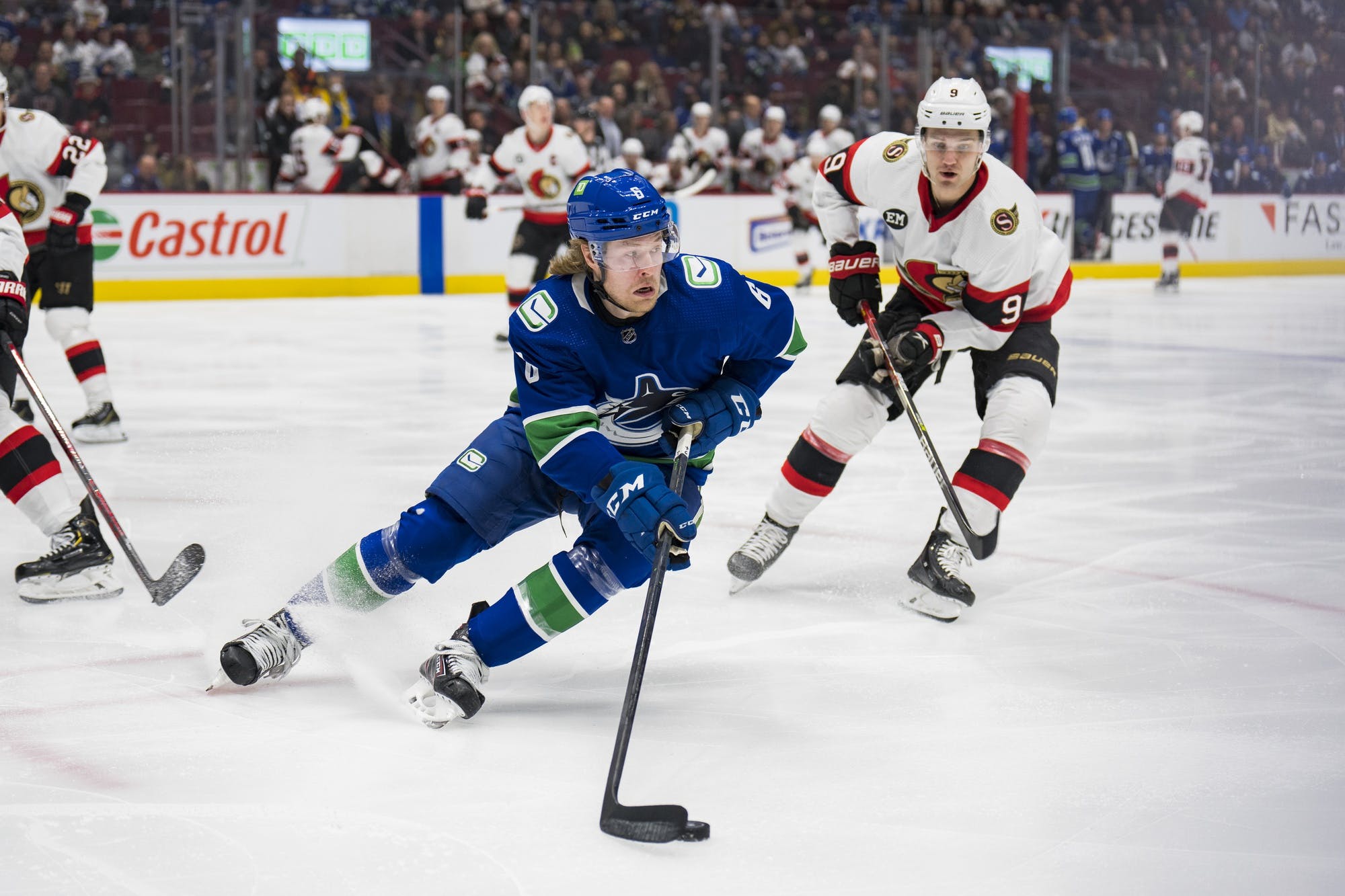 By Stephan Roget
4 months ago
Just days before the deadline to extend qualifying offers to pending RFAs, the Vancouver Canucks announced the re-signing of Brock Boeser, inking the 25-year-old right winger to a three-year, $6.65 million AAV extension.
The reception amongst the local fanbase and mediasphere was almost universally positive, with most caught somewhere between happiness that the much-loved Boeser was staying in the Canucks fold and pleasant surprise that the terms were so agreeable.
How agreeable are we talking? Well, agreeable enough that Boeser’s new contract constitutes fair pay and value already, even if he never improves beyond the average standard of play he’s displayed over the past few years.
And if Boeser does improve, adding consistency and balance to his game as he enters those prime-age years of 25-to-28? Then we’re talking bargain.
There’s no doubt that, despite an understandably difficult season in 2021/22, Boeser remains one of the top-producing right wings in the NHL and a genuine top-line talent.
Over the past three seasons, from 2019/20 to 2021/22, Boeser has put up 140 points in 184 games for a PPG of 0.76. Amongst right wings who have played at least 100 games during that span, that 0.76 PPG ranks Boeser 16th overall. From NHL.com
And if you’re one of those types who value goals over assists, just know that Boeser’s goals-per-game rate is tied for 13th overall with Andrei Svechnikov and Timo Meier over that same span.
Now, where does Boeser’s new cap hit rank him in the same crowd?

From CapFriendly.com
As of this writing, Boeser’s $6.65 million AAV is ranked 14th among all NHL right wings.
Of course, that’s just raw, contextless scoring, but by that very basic measure it seems like a fair contract. It’s in the added context that the potential bargain becomes more apparent.
First up is the likelihood of Boeser climbing the RW PPG chart at the same time as he slips further down the RW AAV chart. The latter part is a near-guarantee, as more right wings are bound to sign big-ticket contracts over the three seasons remaining in Boeser’s.
The bit about Boeser’s own production improving is less of a guarantee, but still quite probable. Everyone knows the awful circumstances of Boeser’s 2021/22 campaign, and there’s little doubt that his personal turmoil had something to do with his lacklustre on-ice performance.
Take last year as a mulligan, and see where Boeser rates at right wing. Across just the 2019/20 and 2020/21 seasons, Boeser’s PPG of 0.84 was good enough for tenth overall amongst right wings.
If he can just bounce back to that level of production, his contract looks like much greater value. If he can bounce back AND take a step forward beyond his own standard, we’re going to be talking about someone who is a top-ten scoring right winger and about the 25th-highest paid right winger by the time his contract is complete.
That might not be “total steal” territory, but it’s cost-efficient at the very least, and the Canucks need as much cost-efficiency as they can get moving forward.
There’s also the necessary context of the rest of Boeser’s game, outside of scoring. The Vancouver media has long lauded Boeser as defensively-underrated, and the numbers continue to bear that out, even on the heels of a tough season.
In 2021/22, Boeser faced a higher-than-league-average quality of competition and still skated away with mostly positive analytics across the board.

From NaturalStatTrick.com
Boeser has been identified in seasons prior as one of the most successful board-battlers in the league, too, despite his reputation as a pure sniper. In fact, Boeser’s whole offensive game has rounded out nicely as he’s aged, and now he’s just as likely to dig out a loose puck and set up a teammate than he is to be on the receiving end of such a setup.
If there’s one downside to be found in Boeser’s new contract, it’s in what comes after it. The extension is fairly low-risk throughout its term, with little chance of Boeser delivering less than $6.65 million’s worth of performance in any of the three years. The risk comes in Boeser elevating his game throughout the three years, leading to another, larger pay raise come 2025.
But that’s a good problem to have, and it might not even be all that much of a problem. The salary cap will almost certainly be a few million higher by 2025, and the Canucks will be extending a 28-year-old Boeser. Another five or six year pact at that point would cover the downward slope of his prime without taking him all the way into old-agedness. Or, maybe that’s an opportunity to cut bait and move on to other, younger scorers.
Any way you slice it, the Boeser contract looks like a positive for the Canucks. The floor expectation should be that the deal is perfectly fair moving forward, and there’s plenty of opportunity for it to continuously tip further into bargain quality.
Not bad at all for the first major contract signed by the Patrik Allvin front office.
More from CanucksArmy:
Uncategorized
Recent articles from Stephan Roget