Bo Horvat may be underperforming offensively, but he’s finally nailing it as a shutdown centre 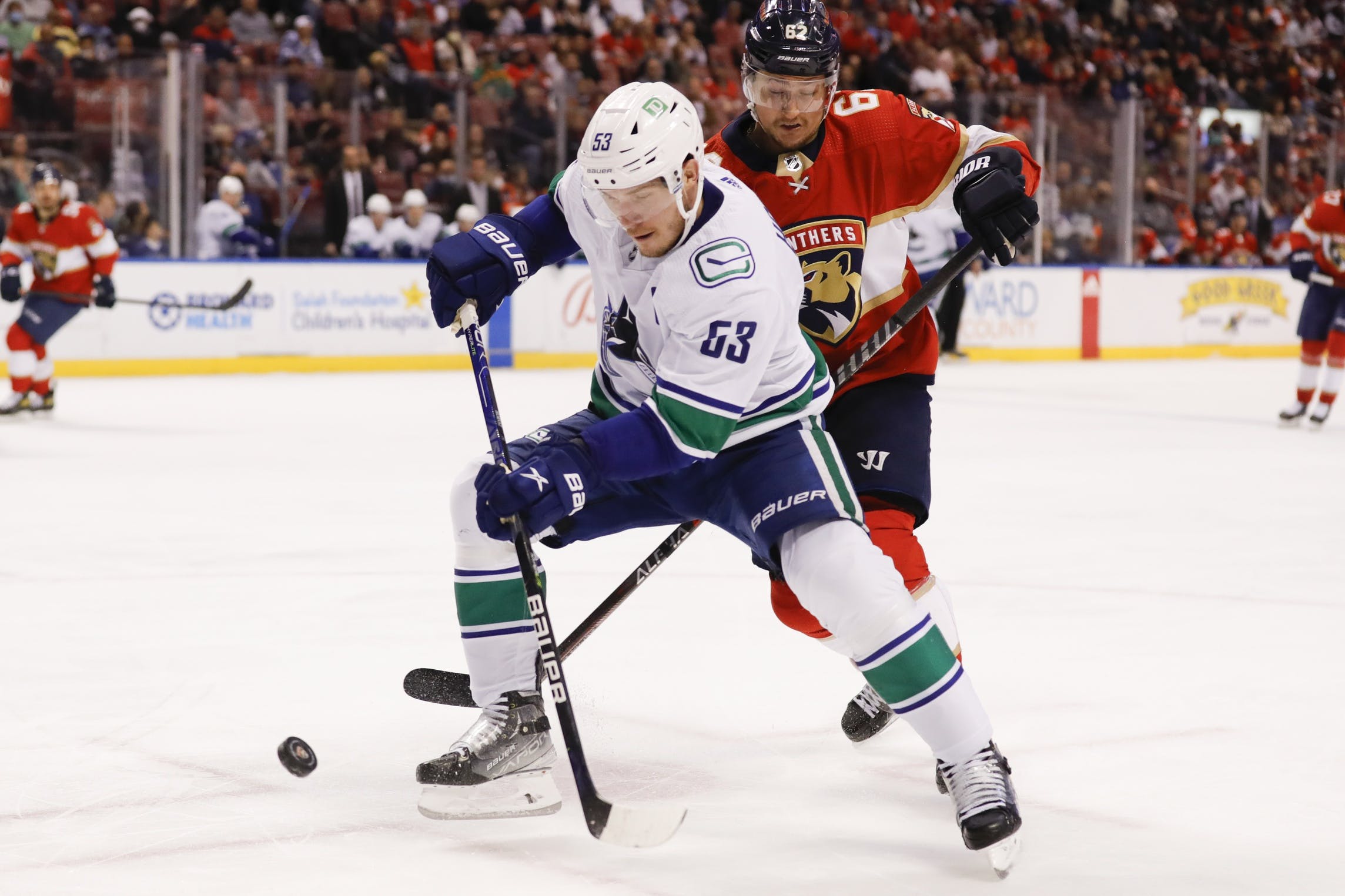 By Stephan Roget
9 months ago
There are no two ways about it. Bo Horvat is struggling offensively.
More than halfway through the 2021/22 season, the Vancouver Canucks captain has just 23 points in 41 games. That makes for a point-per-game average of 0.56, a sharp decline from his production over the past few seasons. If Horvat maintains that PPG through the end of the year, it would be his lowest since his sophomore campaign.
Fortunately, offensive numbers don’t tell the whole story when it comes to Horvat’s season. The lack of scoring is disappointing — there’s no doubt about that. But it comes at a time when Horvat is once again being asked to fulfill the role of a shutdown centre, and this time he’s actually — finally — performing well in that position.
It wasn’t supposed to be this way. In the offseason, the Canucks acquired Jason Dickinson from the Dallas Stars for the express purpose of becoming their dedicated shutdown centre, which should have allowed Horvat to slide into a more traditional, offence-focused 2C role. But that didn’t happen. Dickinson has, thus far, been a bit of a flop in Vancouver, and he certainly hasn’t shown much capability of shutting anyone down. And so, as they have so many times in the past, those duties have fallen to Horvat.
At 20:09 per game, Horvat is playing the second-most minutes of his career, and they’re probably also the toughest minutes he’s faced. No Canuck, and few players in the league as a whole, hit the ice for a higher percentage of time against opposing top lines. 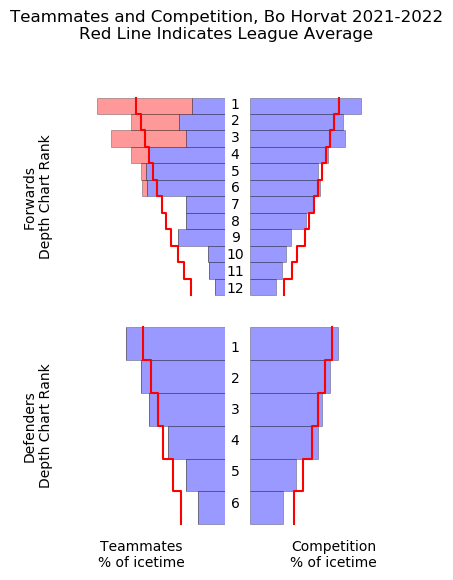 HockeyViz.com
Horvat plays well above the league average against first lines, about the league average against second lines, and below the league average against third and fourth lines.
He also, in true shutdown centre fashion, starts the majority of his five-on-five shifts in the defensive zone. 56.3% of them, to be precise, the third-highest ratio of his career. Again, many of those d-zone faceoffs come against the best and brightest that the opposition has to offer.
Deployment-wise, this isn’t anything new for Horvat. He’s seen other centres like Brandon Sutter and Jay Beagle come in to fill shutdown roles and struggle, leading to Horvat being thrust into that responsibility time and time again.
But while Horvat has done his best, and has certainly long held a reputation as a strong, two-way, defensively-capable shutdown centre, the numbers haven’t always borne that out. The last couple of seasons in particular have seen Horvat, if not buried at even-strength, at least severely hampered.
As of this season, however, he seems to have figured it out. The shutdown whiz we were all promised when Horvat was drafted has finally arrived, even as the offence has dried up.

From NaturalStatTrick.com
Pick a fancy stat, any fancy stat, and you’ll see Horvat performing at the best rate of his career, despite his deployment, opposition, and circumstances.
Possession? Horvat’s third on the team amongst forwards with a 53.07% Corsi, less than half a percentage point off the outright lead, and about five percentage points better than he has been the last two years.
Expected goals? He’s just a hair under even, and again better than he’s ever been.
Control of chances, and specifically high-danger chances? Horvat is over and above 50% for the first time in a long time, and the best on the entire Canucks roster.
In terms of raw numbers, you might hope for slightly better results. Horvat has been on the ice for 23 even-strength goals for and 27 even-strength goals against.

From NHL.com
But that has a lot more to do with Horvat and his linemates’ lack of contribution at the other end of the ice than anything they’re doing in the defensive end.
The last two years saw Horvat let in nearly one even-strength goal against per game. In 2021/22, it’s been at a rate of 0.66 per game. He’s suppressing shots, chances, and goals against like never before, tough deployment and all.
Horvat’s contributions to the penalty kill should also be noted. He didn’t get a lot of shorthanded time under Travis Green, but that’s changed under Bruce Boudreau. Through 41 games, Horvat has played an average of about a minute shorthanded, and he’s only been on the ice for seven power play goals against.
And let’s not forget those faceoffs. Some might debate their overall importance to winning and losing at the NHL level, but whatever they’re worth, Horvat is the best in the business at them.
Horvat has taken 939 faceoffs through 41 games and won 523 of them for a winning percentage of 55.7%. Only Patrice Bergeron has taken and won more. And, like Bergeron, we have to keep in mind that the bulk of these faceoffs are coming against opposing 1Cs, and in the defensive end, where the stakes could not be higher. Regardless of their overall impact, faceoffs are clearly an enormous factor in Horvat’s shutdown game, specifically.
And so, Horvat, who has spent his entire career thus far overperforming expectations offensively and underperforming then defensively, has begun underperforming offensively and blowing all reasonable expectations out of the water defensively.
As the Canucks as a whole have tightened up in their own end — also defying expectations — Horvat has been making far more of a difference than most would give him credit for.
As for that aforementioned offensive statline? It may look incontrovertible, but we’re going to take a little bit of time at the end here to explain why even that’s not nearly as bad as it looks.
While the entire team’s defensive outlook has improved, team offence has really hit the skids in Vancouver, and everyone south of JT Miller have seen their production suppressed. Just having Elias Pettersson struggle has meant a lot more defensive attention and pressure put on Horvat as the 2C, and that’s on top of the pressure of his own defensive responsibilities. Throw in a rotating cast of wingers in which the only consistent face is Tanner Pearson, and Horvat’s lack of scoring becomes a lot more understandable.
There’s also the fact that, as a second line player — even a great one, as he’s has been in the past couple of years — Horvat is naturally streaky. We’ve seen him go on tears in which he’s still led the NHL playoffs in goal scoring two rounds after his team has been eliminated, and we’ve also seen him go on some extended slumps before.
Throw in an extra multi-point game or three between now and the end of the season, and suddenly Horvat’s pace starts looking a lot closer to his usual standard. All he really needs to do is turn it on for a couple of weeks, and he’ll be right back in that 60-70 point range. What we’re saying is, give it ‘til the end of the season, and then judge how poorly Horvat performed offensively. Chances are good that the situation will look at least a little brighter.
And even if it doesn’t?
Horvat, his team, and its fans can still take some solace in his remarkable progression as a defensive player. The Canucks have been searching for a shutdown centre since Manny Malhotra left town, but it turns out they’ve had one in the fold all along.
Horvat just needed some time to figure it out, as he now does at the other end of the ice.
Vancouver fans should grant him that patience. He’s worth it.
Uncategorized
Recent articles from Stephan Roget