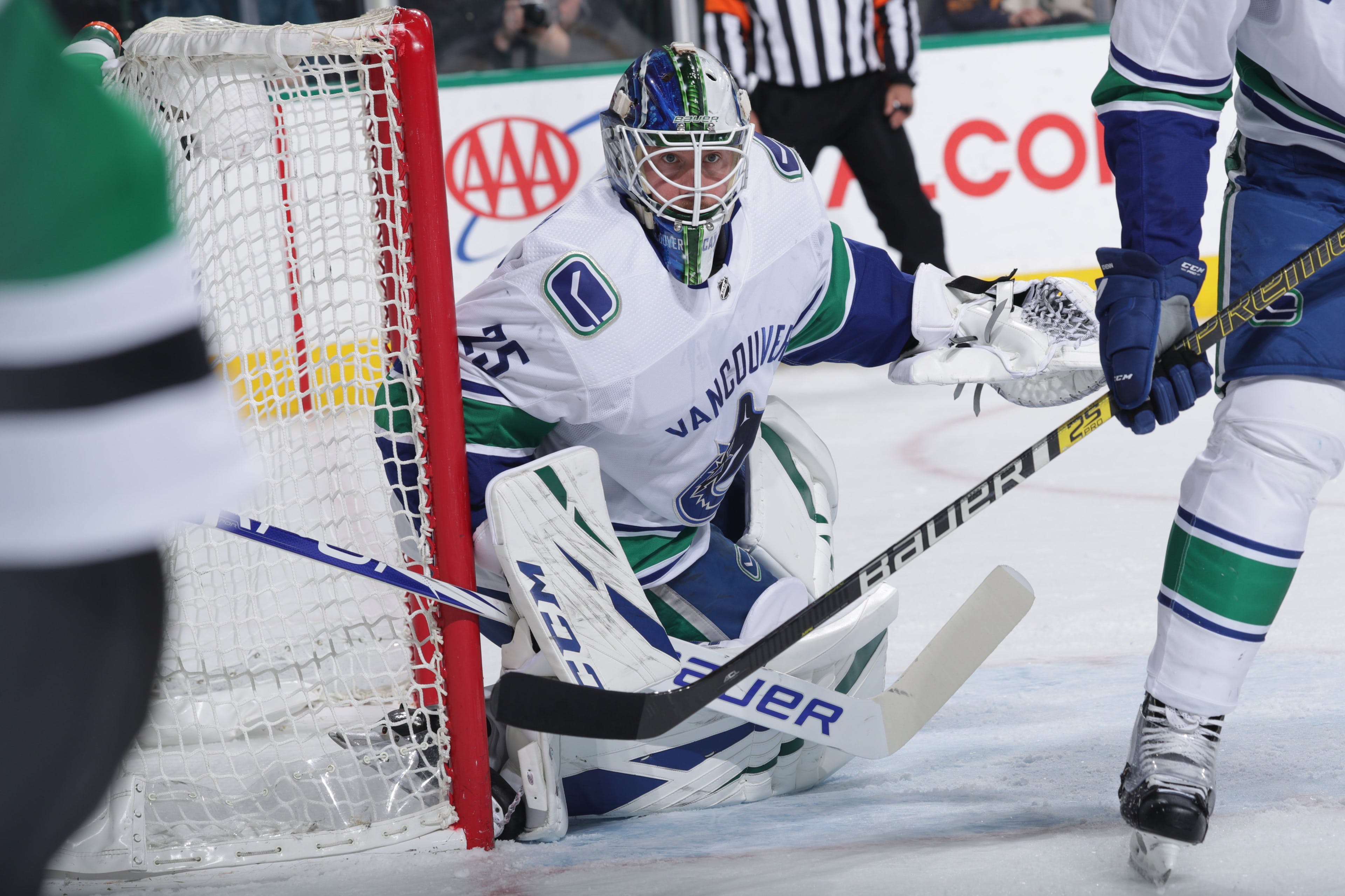 By Colton Davies
8 months ago
The NHL’s trade deadline is just around the corner. I thought it would be a fun idea to look back on five of the best and worst deals that the Canucks have made at the trade deadline.
With that said, we are going to take a look at trades that were made from the 2010-present day. Hockey has changed a lot over the last decade, Canucks management has had its changes as well. Mike Gillis of course was gm from 2008-to 2014 and then the infamous Jim Benning took over from 2014 until his departure on December 5th. With Patrik Allvin now in the office, it will be interesting to see what moves he, and veteran Jim Rutherford gets done.
Every GM wants to succeed, and come deadline day, some make moves that put their team over the top, and others make moves that are a complete low blow. In most cases though, trades work out, fulfilling both teams’ needs. However, they are times when trades don’t work out in one’s favour and are lopsided, we have seen that in the past with a few historical trades. Let’s dive into the Canucks worst deadline deals over the last 12 years.

In 2012, one year after the Canucks made their crazy run to the Stanley Cup Final, they opted to trade skill, for toughness. A classic trade. Then gm Mike Gillis, traded promising rookie Cody Hodgson and Alexander Sulzer to the Buffalo Sabres in exchange for Zack Kassian and Marc-Andre Gragnani. Prior to being traded, Hodgson had 33 points in 63 games, he was a favourite among the prospect pool.
His relationship with the Canucks unfortunately was a rollercoaster, it went sour when Hodgson injured his back and former head coach Alain Vigneault downplayed the severity. Sound familiar? After he was dealt, he went on to play four seasons with the Sabres before eventually joining the Nashville Predators where he would finish off his career.
On the flip side, Kassian struggled for four years with the Canucks and was unable to stay consistent. At the end of the day, adding the power-forward didn’t do much for the Canucks at all. Kassian now plays for the Edmonton Oilers, where he has found success.

While this is not necessarily a deadline-day deal, it was a trade that occurred just a few days prior to the 2016-17 deadline. The Canucks dealt veteran, hero, and fan-favourite Alex Burrows to the Ottawa Senators in exchange for Johnathan Dahlen. Yes, the Ring of Honour Alex Burrows was traded. I’d say it was an emotional day for Canucks fans. Burrows would go on to help the Senators reach the Eastern Conference Final, they lost in game 7 to the Pittsburgh Penguins. Burrows would go on to play one more season with the Sens before announcing his retirement.
Dahlen struggled and was unfortunately unable to make the Canucks’ roster and find consistent playing time. He was later traded to the San Jose Sharks.

At the time, this seemed like a good trade. At the 2014-15 deadline, the Canucks sent a second-round pick to the Calgary Flames for the former 13th overall selection. Fans were actually interested to see if Baertschi could turn it around and produce like a first-round talent. In 225 career games dawning the blue and green, he registered 112 points (58 goals, 52 assists) and after spending some time with Utica making $3,000,000 a year, it was time to part ways. Baertschi now plays for the Vegas Golden Knights affiliate in Henderson.
Oh yeah, that second-round pick ended up becoming current top-four Flames defenceman, Rasmus Andersson. Not a good look for Benning.

Who remembers this deal? At the 2012 deadline, the Canucks were eager to fix their bottom-six and so they dealt Taylor Ellington, and two fourth-round picks to the Columbus Blue Jackets in exchange for 34-year-old and former Stanley Cup Champion Samuel Pahlsson. As expected, the Canucks did not receive the 2007 Stanley Cup champion version of Pahlsson and instead had a veteran who was far past his prime. Pahlsson would play just one season with the Canucks before going back to Sweden.
Who were the fourth-round picks you ask? Well, one was Taylor Leier, but the other was Josh Anderson. He has carved himself a dominant role with the Montreal Canadiens and helped lead them to a Stanley Cup Final last season.

In April of 2013, the Canucks were at a loss when Ryan Kesler went out with an injury. Trying to revamp their offence, they went out a couple of days before the deadline and acquired Derek Roy from the Dallas Stars in exchange for Kevin Connauton and a second-round pick (Phillipe Desrosiers).
Roy’s situation is far too familiar, he was never the same after an injury in 2010-11 and unfortunately was past his prime when the Canucks picked him up. In just 12 games that season, he had six points (three goals, three assists). Roy then left the Canucks and went on to play for the St. Louis Blues, Nashville Predators and Edmonton Oilers before heading over to Europe. Connauton on the other hand has played over 348 games over the course of nine NHL seasons.

When the Canucks dealt defenceman Erik Gudbranson I think some Canucks fans were able to breathe a sigh of relief. The stay-at-home defender played a bodyguard role for the Canucks, in 139 games he accumulated 19 points and 136 pims. However, the acquisition of Pearson allowed for Bo Horvat to have a new winger at his disposal. Pearson possesses a high hockey IQ and is not afraid to drive the net. In 2019-20 Pearson set a career-high with 45 points in 69 games, his first full season with the Canucks. His Stanley Cup ring brings a much-needed playoff experience to the locker room.
Gudbranson spent two seasons with the Penguins before bouncing around the league. He found a home with the Flames this season and has 14 points in 59 games- along with a handful of fighting majors.

During the 2011 trade deadline, the Canucks dealt prospect Evan Oberg and a third-round pick (Jimmy Lodge) to the Florida Panthers for Chris Higgins. This was a great trade for the Canucks, adding a phenomenal grinder to their lineup just before their major playoff run. He was a staple on the Canucks bottom-six from the moment he stepped foot in Vancouver.
Not only did Higgins play a crucial role in the 2011 Stanley Cup run, but over the next five seasons, he became a fan-favourite. In 314 games for the Canucks, he tallied 142 points and would eventually announce his retirement at the end of the 2015-16 season.
Both Evan Oberg and Jimmy Lodge found careers in the ECHL. Safe to say who the winner was in this deal.

Does everyone remember the whole fiasco surrounding Eddie Lack, John Tortorella and Roberto Luongo? Well, that is one of the main reasons why Luongo was dealt at the 2014 trade deadline.
Mike Gillis swung a deal sending Canucks starter Robert Luongo and Steven Anthony to the Florida Panthers (there’s a rich history of trades between the two clubs) in exchange for Jacob Markstrom and Shawn Matthias. Markstrom eventually made a massive impact in Vancouver, as the monster Swedish goaltender became a staple for the Canucks goaltending tandem. Meanwhile, Shawn Matthias was a solid pickup for the bottom-six, and is best known for scoring a hat trick against the Boston Bruins.

At the 2018 deadline, Benning dealt Austrian veteran Thomas Vanek to the Columbus Blue Jackets in exchange for Jussi Jokinen and Tyler Motte. Vanek played just 61 games with the Canucks before being traded. While his acquisition failed in the long-term, offloading him to the Blue Jackets worked out in the Canucks favour.
Jokinen would play out the remainder of the season with the Canucks, recording 10 points (four goals, six assists) in 14 games. Meanwhile, Motte has become another fan-favourite and has found a tremendous amount of success on the fourth line this season with Matthew Highmore and Juho Lammikko. I guess there are a few things we can thank Benning for after all.

Remember how Dahlen ended up with the Sharks? This was the deal that landed him there.
At the 2019 deadline, Benning traded Dahlen to the Sharks in exchange for Swedish prospect Linus Karlsson. While it’s unclear whether or not Karlsson will sign in North America with the Canucks, this could be yet another sweet victory. Currently, Karlsson is shredding the SHL up where he has 37 points in 47 games so far. The high-end Swedish centre has great hands and overall offensive skills. He plays a quality game that could translate into success at the NHL level.
Uncategorized
Recent articles from Colton Davies