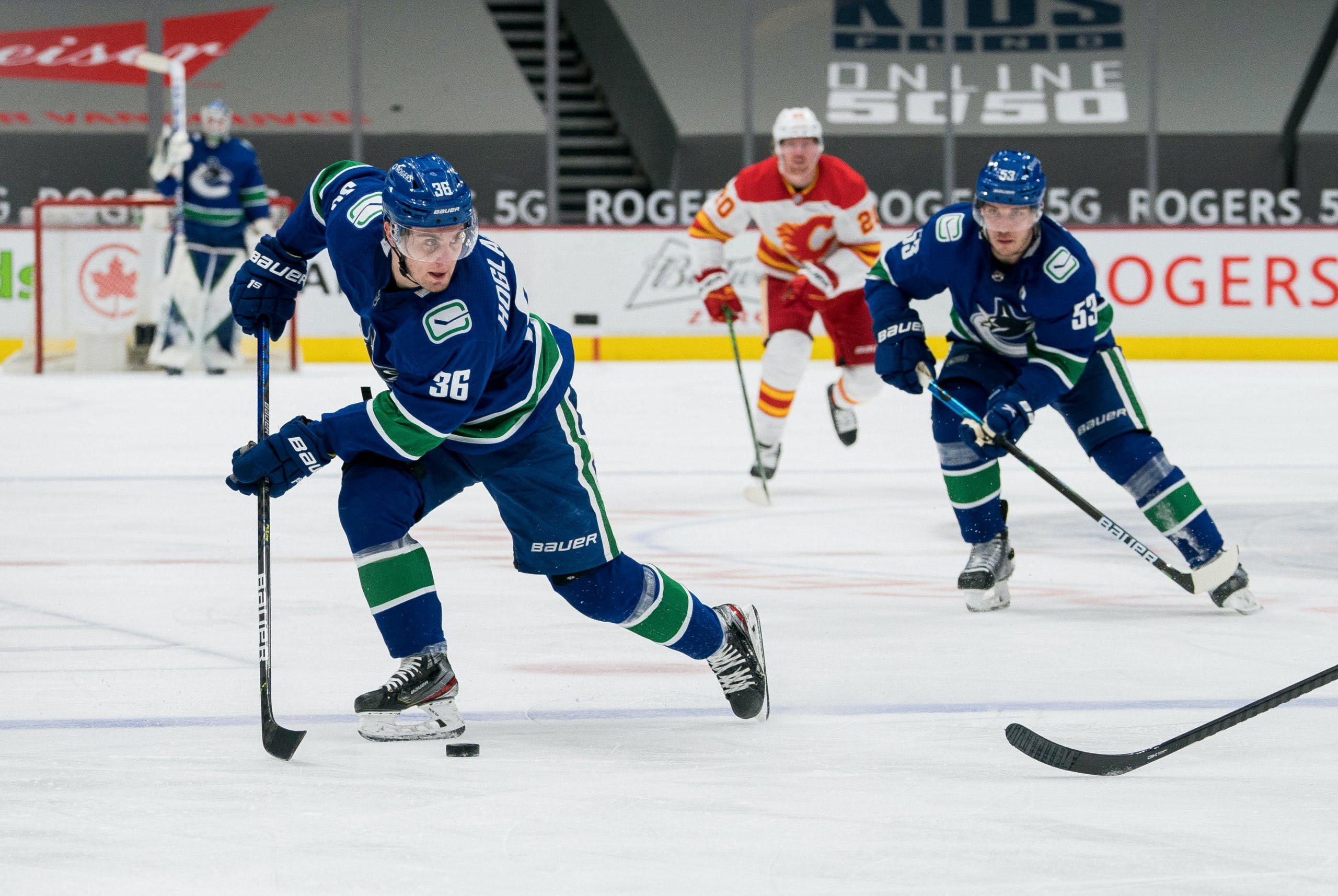 By Shu Lei Wu
1 year ago
Nils Hoglander’s emergence as a staple in the Vancouver Canucks’ top-six has been a welcome surprise in a hockey market grasping at straws for positives nearly halfway into the season. After a run of Calder Trophy finalists in Boeser, Pettersson, and Hughes over three consecutive years, the Canucks’ rookie dominance looked as though it was coming to a close. Hoglander’s performances, however, have the Canucks back in the conversation once again with another potential Calder candidate. So how does Hoglander stack up against his fellow first-years?

Coming into the season, Calder discussions mainly revolved around the likes of Alexis Lafreniere, Igor Shesterkin, and Kirill Kaprizov. Given the unique circumstances of the pandemic-abbreviated season, NHL teams have been operating with expanded roster sizes that have allowed them to accommodate rookie players that might otherwise still be playing in junior or another development league. If anything, this has only served to increase the level of competition for the Calder in a year where there really wasn’t one or two players who were clear-cut favorites.
Compared to his competition, Hoglander wasn’t the shiniest toy coming into the season given his draft status and moderate production numbers in the SHL, and there was debate in the Vancouver market prior to training camp if he would even make the team. He didn’t have the 1st overall status of Lafreniere nor the years of KHL experience boasted by Kirill Kaprizov, and hockey experts ranked him accordingly.
Scott Wheeler, one of The Athletic’s in-house prospect specialists, had Hoglander ranked as low as 19th on a list of 20 potential Calder candidates coming into the season. Even in Vancouver, the eve of Hoglander’s rookie campaign did not arrive with the type of hype that surrounded his predecessors in Boeser, Pettersson, and Hughes, but Hoglander has nevertheless established himself firmly in the Calder conversation.

To simplify the process, we’ll primarily be comparing Hoglander to his fellow forward group and operate under the assumption that the three finalists will consist of one forward, one defenceman, and one goaltender given the impressive debut seasons from Ty Smith and Alexander Romanov on the backend as well as Kevin Lankinen and Vitek Vanecek in goal. This is also based on the fact that current odds point to the same positional split of one forward, one defenceman, and one goalie to form the top 3, as shown below.

By The Numbers: Counting Stats

When the Professional Hockey Writers Association gathers to submit their Calder Trophy votes at the end of the 2020/2021 season, each voter will have a number of factors to consider, but rightly or wrongly, none will be more important than the counting stats. You can control play to an elite level, but if you don’t produce, you’re unlikely to find yourself in the finalist conversation.
After 23 games, Hoglander is well within the top 10 for counting stats in all situations and has skated alongside Bo Horvat and Tanner Pearson on Vancouver’s second line in addition to his duties on the second power play unit.

As we can see from the table above, Hoglander is firmly in the mix when it comes to counting stats, but still has a bit of catching up to do. At this juncture in the season, it’s important to breakdown Hoglander’s performances at 5-on-5 and on the power play to understand how he’s performing relative to other rookie forwards. This will help us understand where he might be able to carve out an advantage (or make-up ground) and if we should expect that gap to narrow or widen as the season progresses.

At even strength, Hoglander has been a creative boost on the second line to complement Horvat and Pearson’s direct, straight-line style of play. Hoglander’s goal assists and shot-creating assists are proof of this.

Hoglander is 2nd for all NHL rookies in 5-on-5 point production, goals, and assists, all despite posting a 6.8% shooting percentage, which is one of the lowest among all forwards in the table above. Hoglander has been dynamite during 5-on-5 play when compared to his fellow rookie class, and regression to the mean in this situation should be expected as a positive for Hoglander given his low conversion rate.
However, Hoglander’s shooting has been an area of concern — at least from the eye test — as he often has a tendency to miss the net on scoring chances. To fully cement his place as a Calder finalist, Hoglander will have to continue creating scoring chances for his linemates while burying more of his own opportunities.

Despite his elevated role on the second line, Hoglander has been disadvantaged by being deployed on a stagnant second power play unit for the Canucks. This is reflected by the fact that Hoglander has yet to register a single power play point thus far, which is a major handicap for any Calder hopeful. 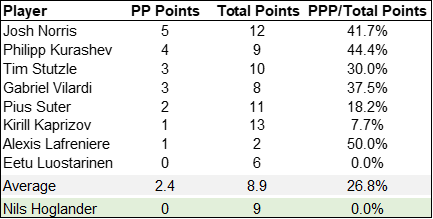 This is both encouraging and discouraging news.
It’s great that Hoglander is 2nd among all rookies at 5-on-5 production without the boosting effects of power play points, but to stand any real chance at a nomination, he’ll need the second power play unit to start clicking to bolster his counting numbers and help him make up some ground. Other than Kaprizov and Stutzle, most of the rookies in the table above are also on second unit duty. If Hoglander had produced in line with the rest of his fellow rookies on the power play, he’d have an extra 2 points and would be 3rd in total points with 11 (rounding down from 11.4).
Therefore, from a counting stats perspective, it’s imperative that Hoglander maintain his 5-on-5 play while also getting some help from the second power play unit to boost his counting stats into the finalist conversation.

By The Numbers: The Fancies

At 5-on-5, Hoglander has posted extremely strong shot metrics relative to his peers.

These numbers are even more impressive when you consider how much the Canucks have struggled out of the gate, and the underlying data supports Hoglander’s place as one of the best 5-on-5 contributors among all rookie forwards.

Within this forward group, Kaprizov is the current Calder favourite (he has the best betting odds) and is thus the best benchmark for Hoglander to compare against. For each player’s isolated offensive impact, we’ll turn to HockeyViz’s isolated impact charts to get a sense of each player’s impact on their team’s offensive abilities at 5-on-5.
Kirill Kaprizov 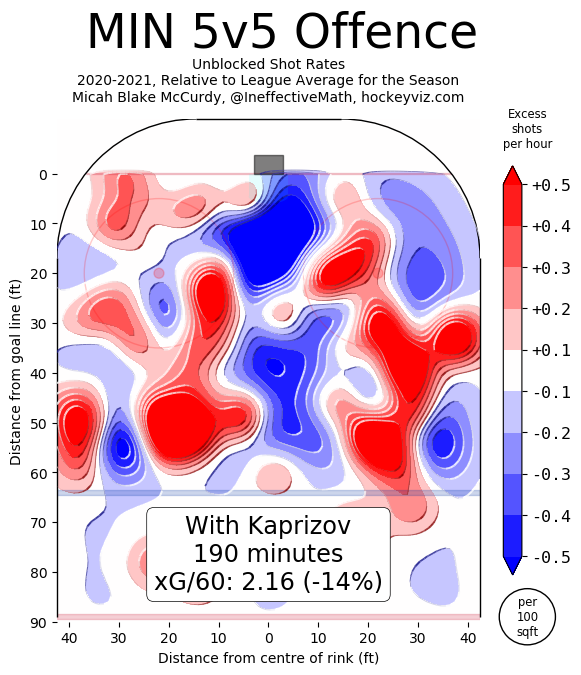 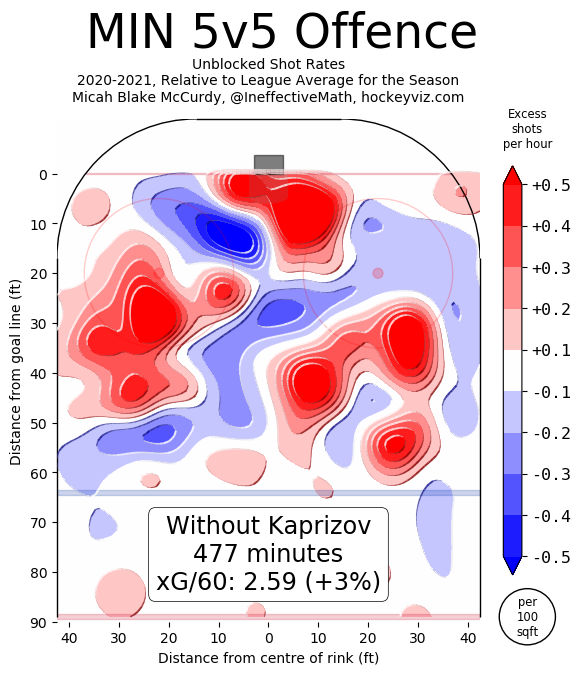 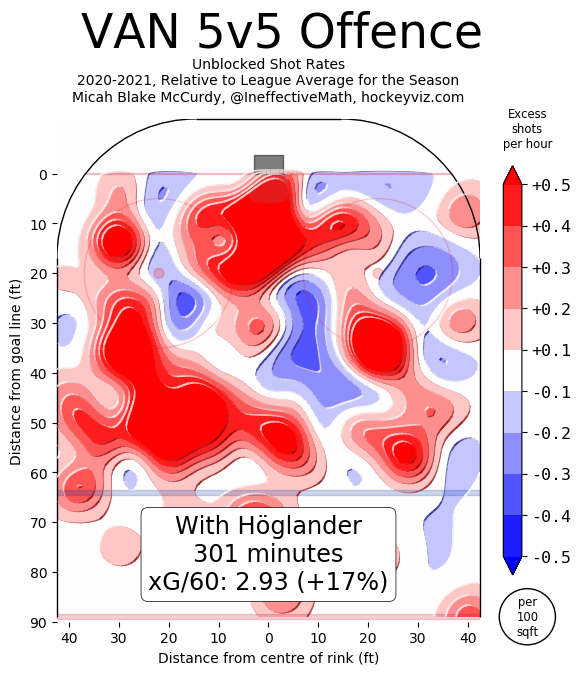 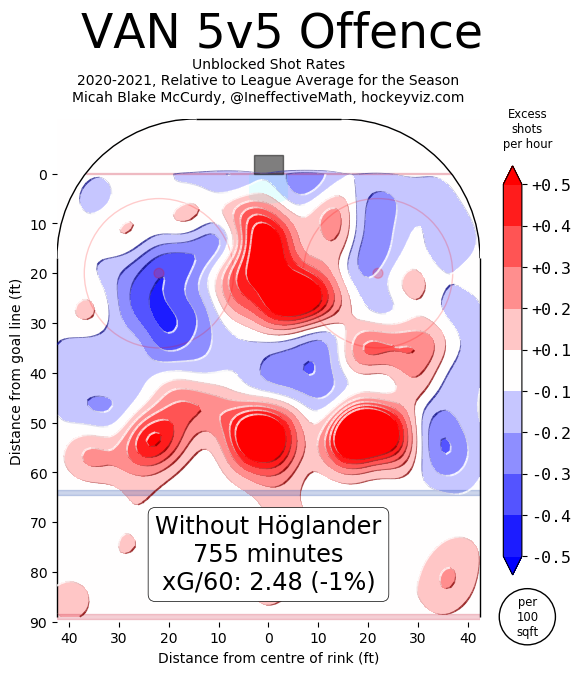 Hoglander’s effect on the Canucks’ 5-on-5 offence should come as no surprise. However, what’s interesting to note is that the Wild are actually worse off in terms of xG/60 when Kaprizov is on the ice despite Kaprizov’s strong 5-on-5 counting numbers. Part of this can be attributed to Kaprizov’s IPP of 83.3 and on-ice team shooting percentage of 13.5%, both of which are likely to regress over the course of the season.
Hoglander, meanwhile, has an IPP of 69.23 and suffers from an on-ice team shooting percentage of just 7.03%. On top of his own poor shooting percentage, Hoglander should be in line for some positive regression. Both players play roughly the same number of minutes at 5-on-5, with Hoglander and Kaprizov averaging 12:59 and 12:40 EV TOI/G, respectively.
One key factor working against Hoglander is power play deployment. Kaprizov is seeing significant time on the Wild’s first power play unit, while Hoglander continues to work on the Canucks’ second unit. Both units have been struggling early on this season, with Minnesota’s power play currently operating at a 9.1% conversion rate. Even if both units heat up, however, it’s reasonable to expect Kaprizov to take the edge on special teams given that he’ll have more power play time (Kaprizov averages 4:03 PP TOI/G compared to Hoglander’s 1:51) and more talented teammates to work with while he’s on the ice.
From a fancy stats perspective, things look good for Hoglander, at least at 5-on-5. He’s driving offence at a better rate than the current favourite in Kirill Kaprizov, and while the Wild forward has so far benefitted from some significant puck luck, Hoglander has experienced the opposite. Over the course of the season, we should see the gap between these two young forwards remain closer than many expect, although Kaprizov is still very likely to be ahead when all is said and done.
Of course, offence isn’t the only metric for player evaluation, especially with defencemen and the defensive side of the game also in need of consideration. For a stat that encapsulates any player’s contribution to his team, we can turn to Dom Luszczyszyn’s Game Score Value Added (GSVA) model, which gives a GSVA score to each skater. Unfortunately, goalies aren’t part of the model, so Kevin Lankinen isn’t included, but we can see that Hoglander ranks second among the most notable rookie skaters:

So What’s The Verdict?

Despite an impressive start to his NHL career, it’s unlikely that Hoglander will come home with Vancouver’s second Calder in three years. Alexis Lafreniere’s slow start has likely put the Rangers forward too far behind the race, but Hoglander still has some stiff competition and is in tough for the trophy itself given the impressive debut campaigns from Kirill Kaprizov, Ty Smith, and Kevin Lankinen.
However, if Hoglander continues to drive play at 5-on-5 and the second power play unit heats up, he could easily warrant a nomination as one of the finalists (if we break off from the initial assumption of only one forward being nominated) over a defenceman or goalie that cools off over the balance of the season. Even then, you’d probably expect Hoglander to be second-best to Kaprizov among forwards, so if a forward were to win, it would likely be Kaprizov.
If Hoglander were to be nominated, it would be a huge win for the Canucks’ scouting department, who will have produced Calder finalists four years in a row. What’s most important, however, is that regardless of his Calder status, Hoglander’s play 23 games into the season has been a welcome surprise and he looks to have cemented his claim as one of the Canucks’ key players moving forward.
Uncategorized
Recent articles from Shu Lei Wu