We asked, you answered! Here are the results of the CanucksArmy Readers’ Choice Awards 2021/22 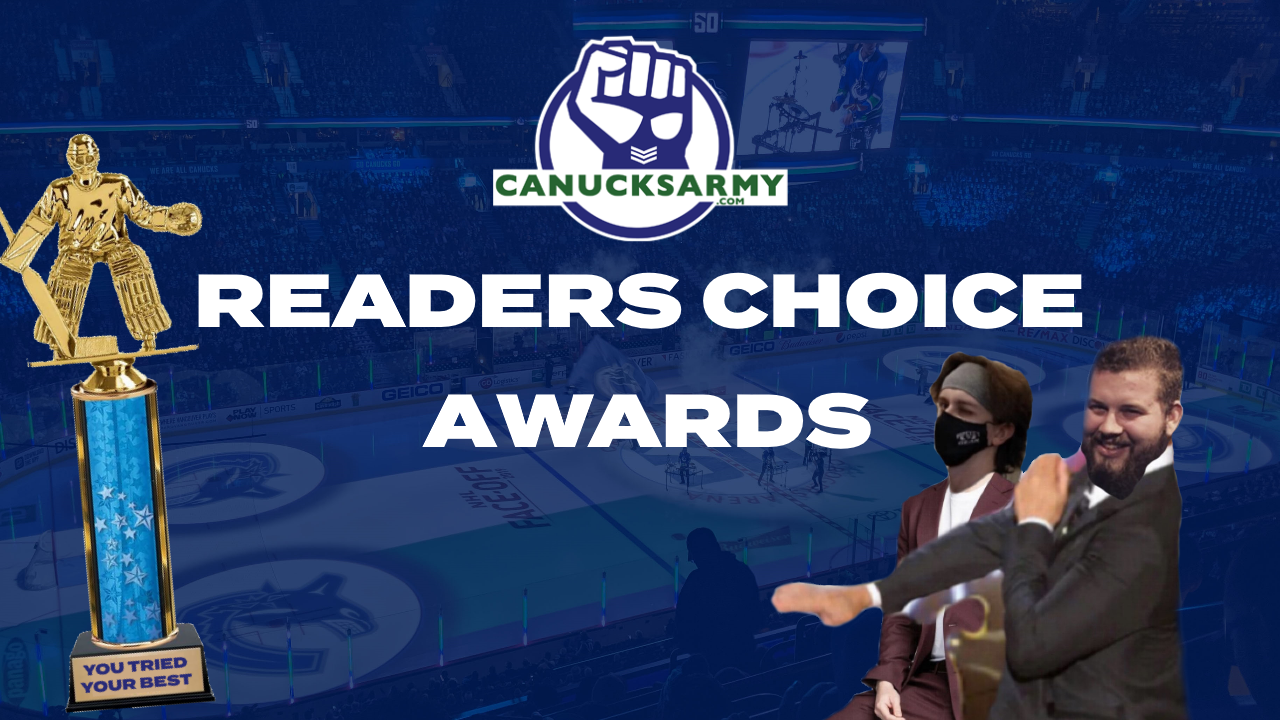 By David Quadrelli
7 months ago
A few days ago, we announced the first annual CanucksArmy Readers’ Choice Awards survey for the 2021/22 Vancouver Canucks season, and our readers did not disappoint.
We received plenty of responses, feedback, and all around, we’d say it was a smashing success.
But you didn’t come to hear about that, you came for the results!
Here’s how you voted in our 10-question survey.

Somewhat unsurprisingly, Thatcher Demko ran away with this one, picking up over 80% of total votes, with J.T. Miller picking up 16% of votes, and Quinn Hughes garnering a hair under 2% of total votes.
There were also a handful of votes for Bo Horvat and Elias Pettersson, as well.

Q2: Favourite prospect(s) to read about

This was the first question where we wanted to get a better feel of what our audience enjoys consuming from us.
Here’s how the total votes broke down, with Jack Rathbone emerging, somewhat unsurprisingly, as the prospect our readers like reading about most. 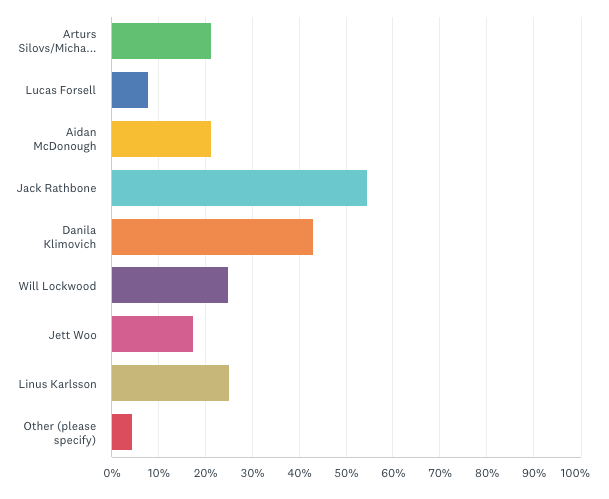 Danila Klimovich was the runner up, and it was pretty spread out from there.
In the “other” category, our readers specified that they like reading about Viktor Persson, Hugo Gabrielson, Dmitri Zlodeyev, and others.
There were also a few people who specified that the Canucks have no prospects worth reading about, and one person even wrote Dylan Guenther. Ouch. 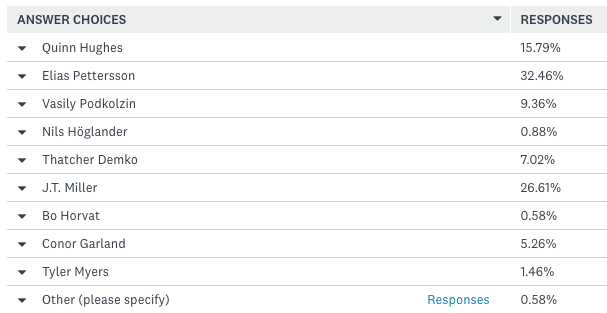 Luke Schenn received one write-in vote, with another voter writing “chaos giraffe” on their ballot.

As a formality, we asked this question, and to the surprise of no one, Quinn Hughes ran away with it.
Luke Schenn picked up the second most votes with 6%, followed by Oliver Ekman-Larsson and Tyler Myers, but it wasn’t particularly close.

We couldn’t wait to hear the answers of our readers on this one, so we tackled it ourselves.
Yesterday, Noah Strang weighed the options of which UFA the Canucks should re-sign this offseason, and landed on Alex Chiasson.
Our readers, however, chose local boy Brad Hunt as the UFA they’d most like to see the club re-up, followed closely by Alex Chiasson. 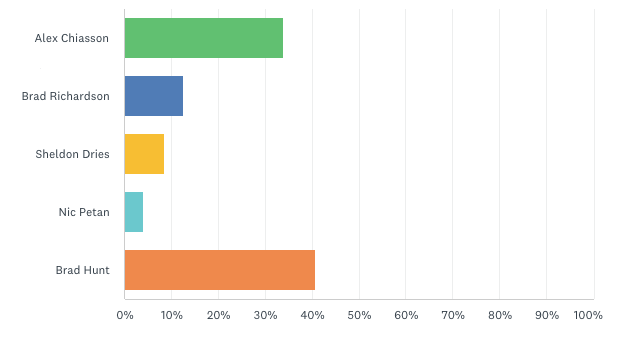 Luke Schenn emerged as our readers’ choice for the most underrated player, followed by Vasily Podkolzin and Kyle Burroughs. 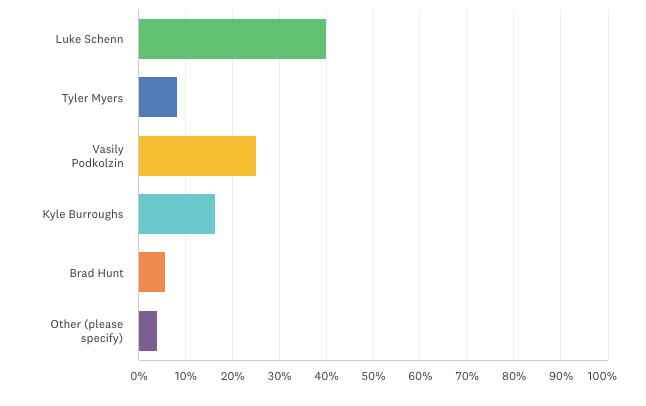 Q7: Player(s) who you like reading quotes from the most (select all that apply)

Look, we get it.
Players don’t often give great quotes.
Usually, it’s the same mundane and cliche answers every day, but damn it we don’t let that stop us from trying to dig deep and find out the things you really want to know — such as which players think there are more wheels than doors in the world.
Here’s who our readers said are their favourite players to read quotes from.

J.T. Miller is an excellent choice, if we do say so ourselves.

Q8: Your favourite series at CanucksArmy

I’ll try not to take it too personally that only 33% of readers voted my “Scenes from morning skate/practice” series as their favourite.
Rather, Scouting with Faber garnered the most votes with 52%, and as someone who edits and reads every single Scouting with Faber article, I have to agree with our readers on this one.
Coming in next was Stephan Roget’s WDYTT series *note to self, it gets posted on Thursdays* with 20% of total votes and Bill Huan’s “What If?” series picked up 10% of the vote.

Q9: Who would you most like to golf/have a drink with?

This one was up for discussion, and the most popular answer doesn’t come as much of a surprise.
I mean, who wouldn’t want to hang out with Bruce Boudreau? 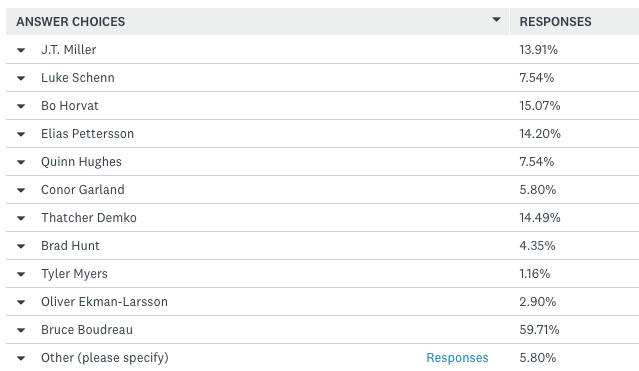 Q10: What series/content/articles would you like to see at CanucksArmy?

This was a question that we’re going to leave open to the comment section as well!
We got some great responses in the survey, and will absolutely use it when determining content moving forward.
Far and away, our readers wanted more draft prospect analysis and I know Faber is licking his chops after hearing that answer.

Some write-in votes we got requested more surveys/ reader engagement, local hockey features, a cooking segment with Faber, and of course “all of the above”.
Thanks for participating in the CanucksArmy Readers’ Choice Awards for the 2021/22 season!
Uncategorized
Recent articles from David Quadrelli