The Arshdeep Bains breakout game in 2-1 victory over Henderson: THE FARMIES™ post game 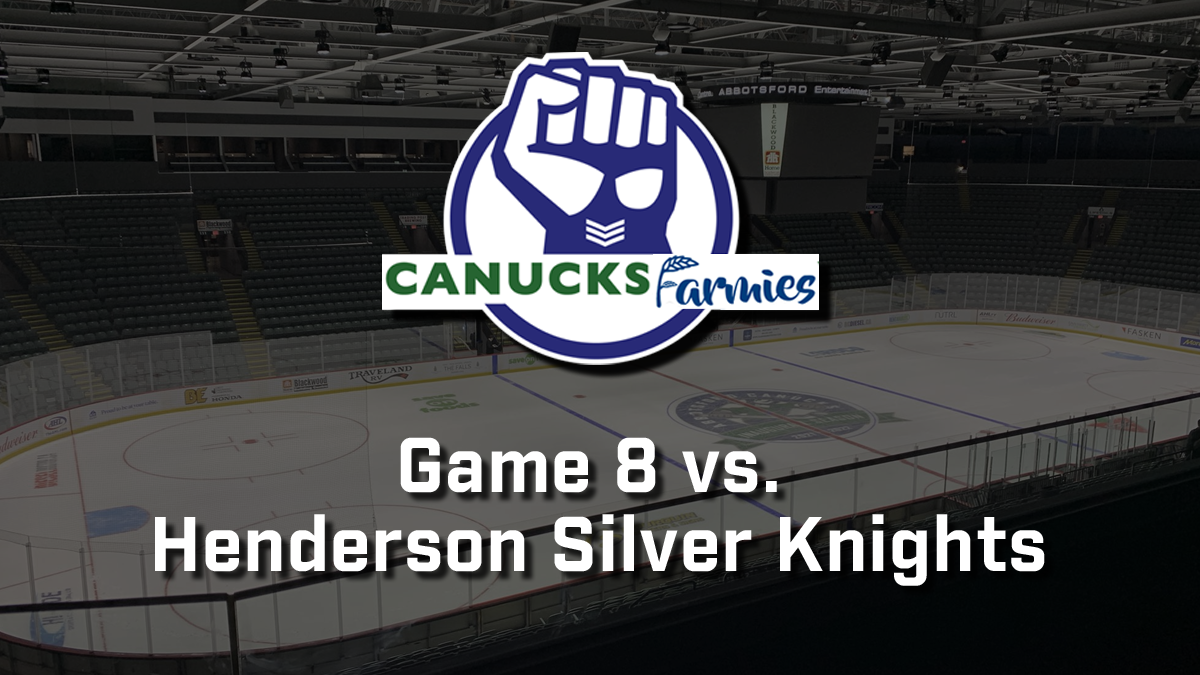 By Cody Severtson
24 days ago
Well, the Vancouver Canucks may be a total tire fire lacking the effort, heart, and pride necessary to inspire confidence in the fanbase.
But those feisty Abbotsford Canucks? Not them!
Closing out a six-game homestand with the first of two against the Henderson Silver Knights, the Abbotsford Canucks kicked off Remembrance Day long weekend with a complete 60-minute effort, highlighted by an oppressive forecheck and dominant puck possession at 5v5.
Though he wants better consistency, head coach Jeremy Colliton liked his team’s effort last night.
“We had a couple of real good long stretches of offensive zone time. One of them turned into the first goal. Sometimes we were playing a bit slow when I would love to see us playing north, getting on the forecheck, and forcing turnovers. When we did that, we were really good and created a lot of chances,” Colliton said post game.
After a string of uninspiring performances, Arturs Silovs came out with his best performance of the season, allowing just one goal while making thirty saves.
“He was solid. He’s a young player. He’s still working through his consistency,” said Colliton when asked about Silovs’ performance. “He looked calm and composed, and he didn’t create extra chances against either with rebounds. So, that was nice to see.”
But it wasn’t just Silovs. Linus Karlsson continued to look like the unironic version of little things Loui, Will Lockwood impressed with his stellar two-way play, and Arshdeep Bains picked up his sixth point in eight games while making a case as one of the team’s best two-way forwards.
Let’s get into the action, and you be the judge!
Starting Lineup
Sheldon Dries describing his transaction history between the AHL and NHL clubs this season:

1st Period
The game started quite well for the home team, with Silver Knights’ goaltender Michael Hutchinson throwing away the puck right to Kyle Rau within the first thirty seconds. Rau dished to the net front for John Stevens, who missed the pass and whiffed on an incredible scoring opportunity.

On the next shift, Linus Karlsson was the recipient of a second brutal giveaway by the Knights. Karlsson picked off the pass while pressuring in the offensive zone and set up Lane Pederson for a long bomb on goal that sailed wide.

Karlsson has looked strong along the boards for much of his AHL tenure, using his strong hand-eye to pick off breakout passes.
Things calmed down over the next couple of shifts until the Silver Knights put themselves on the penalty kill with a delay of game minor four minutes into the period.
PP1: Dowling, Lockwood, Karlsson, Nielsen, Kalynuk
Karlsson nearly opened the scoring for Abbotsford’s first power play unit but missed wide on the open net.
PP2: Bains, Rau, Hirano, Pederson, Juulsen
Arshdeep Bains generated the second power play unit’s best chance on the man advantage with an excellent setup for Lane Pederson.

Bains has looked significantly more confident with each passing game. On the power play, Bains entered the zone with speed and hit a quick stutter step on the Knight’s Jermaine Loewen to open up enough space for Pederson to rush down and split the defence for a drive on Hutchinson.
Jeremy Colliton talked about Bains’ improvement post-game.
“I think he’s been improving here, steadily, with his play away from the puck and with the puck too. He can make plays, and he’s found a way to produce. His puck decisions and finding a way when the offensive play isn’t there, to win lines and move pucks forward and just put the guys he’s on the ice with in a better spot, I’ve seen a progression there.”
It was a possession heavy first ten minutes for Abbotsford, as the Silver Knights elected to stretch the ice with repeated dump-and-chase hockey, which led to very little offence. Though the shot clock was close by the midway point of the period with Abbotsford outshooting Henderson six to four, the Canucks dominated in scoring chances.
The back half of the opening frame began with a run of brutal momentum-ruining missed calls by the referees. A trip on Will Lockwood, a hold against Noah Juulsen, and a cross-checking penalty against Lane Pederson disrupted puck possession in every instance.
It was bizarre.
On the bright side, Karlsson continued to show off the underrated “little things” about his game. After being stripped of the puck inside the offensive zone, Karlsson worked to steal the puck back in the neutral zone and return possession to his defencemen.

With less than two minutes left in the period, John Stevens took an interference penalty that pitted the Western Conference’s worst power play and worst penalty kill against each other.
PK1: Brisebois, Wouters, Juulsen, Lockwood
PK2: Karlsson, Dowling, Keeper, Woo
The immovable object held the unstoppable force to just one shot on goal. But they still had their work cut out for them, with twenty seconds remaining on the PK to start the middle frame!
2nd Period
Fortunately, the Canucks managed to kill off the remainder of Steven’s penalty and resumed their run of heavy possession that dominated the first period.
In a scary moment early into the period, Brady Keeper walked down the right wing to tee up a one-timer, only for it to rise high on Michael Hutchinson, who went down in a heap for several minutes.

Even scarier was the referee’s decision not to blow the play dead despite Hutchinson being clearly out of sorts. Not included in the above clip is Keeper teeing up a second shot on the open net.
The Silver Knights would open up the scoring off a very “AHL sequence” of events, starting with two shot attempts from Abbotsford.
Will Lockwood stepped up with his most noticeable shift of the game with a heavy forecheck to steal the puck and set up Chase Wouters for a shot attempt. Wouters’ attempt was blocked, but Lockwood put himself in the position to pick up the rebound for a follow-up attempt that sailed wide of the goal.

Lockwood did nearly everything right, peeling back to the blue line while Guillaume Brisebois pinched down the left wall for the challenge. Unfortunately, Lockwood bobbled the puck on the line, allowing Jonas Rondbjerg to steal for a breakaway goal on Silovs.
The Canucks’ spent the next five minutes dominating the Knights with possession but had their shot attempts repeatedly kept to the perimeter by the Knights’ defence.
Midway through the period, Stevens was gifted a second glorious tap-in opportunity for Abbotsford but put his shot attempt straight into the outstretched left pad of Hutchinson.

Danila Klimovich had another frustrating game with not much happening in the offensive zone.
After a long shift, Klimovich broke up a play in the d-zone to give himself a breakaway scoring chance. Unfortunately, he teed up a one-timer that sailed nowhere near the goal.

However, minutes later, Bains would exit the d-zone on a speedy chip-and-chase effort to gain the offensive zone for Abbotsford that would eventually lead to the game-tying goal!

Though he didn’t end up with a point on the play, the Canucks first goal of the night was owed heavily to Bains’ slip of Zach Hayes in the neutral zone to retrieve the puck at the Knights’ half-wall.
Abbotsford Canucks goal: 1-1 Tie
Brady Keeper from Christian Wolanin and Justin Dowling

Justin Dowling kicked off the goal sequence with a flip into the zone that unintentionally deflected off the face of Christian Wolanin to the high slot. Wolanin chased down the loose puck and set up Keeper, who scored his first of the season.
In true Canuck fashion, the Farm would give up a five-alarm two-on-one rush chance seconds later.

Fortunately, the Knights would whiff on the scoring opportunity.
Keeper followed up on his first goal of the season with a slick backchecking effort to take away the centre from Kyle Marino after the latter broke past Wolanin for a breakaway chance.

Yes, that’s Linus Karlsson taking the body to disrupt the Silver Knights’ breakout attempt.
In a weird bit of deja vu, the Canucks found themselves on the penalty kill with two minutes left for the second period in a row. This time, Yushiroh Hirano found himself in the box after taking a holding penalty against Sakari Manninen.
PK1: Wouters, Stevens, Brisebois, Juulsen
The Canucks’ penalty kill did well in the waning minute of the second period, preventing Henderson from registering any shots on goal, blocking four attempts, and registering a shorthanded shot of their own.
After forty minutes, the Farm held a narrow shot advantage, 20-18.
3rd Period
Arturs Silovs kicked off the early third-period penalty kill with two incredible stretch saves.

GIPHY doesn’t have audio, but trust me when I tell you that the Abbotsford Centre did not give these two saves the pop they deserved.
Danila Klimovich’s run of unimpressive play bled over into the third period. A lazy play behind the Knights’ goal line saw a run of offensive zone possession end simply because he didn’t move his feet to get a stick on a loose puck.

After last season, one of the areas that Klimovich needed to work on was his work rate away from the puck in both zones. Unfortunately, he’s looked more or less the same as last season. The lazy effort on the above play drove Colliton to bench Klimovich for the rest of the third.
Colliton was blunt in his assessment of Klimovich post game.
“He’s a young player who’s got to earn what he’s going to get, and I’m not helping him if I just throw him out there no matter what. You know, it’s also for the whole group. We want winning habits; we want to be willing to pay the price to move pucks forward and again to put the guys you’re on the ice with in the spot to succeed.”
Yeesh.
“I think he’s had some really good stretches, really good shifts, we’re just looking for consistency,” Colliton added. That is faint praise, and the 2021 2nd rounder clearly has work to do.
Back to more positive vibes from the third, Bains continued to be a menace on the forecheck, stripping Daniil Miromanov behind the Knights’ goal and setting up Wyatt Kalynuk for a shot on goal.

Bains kicked off the sequence with a snappy, no-look cross-ice pass to Nielsen at the bottom of the left circle. Nielsen played the puck off his skate for a point-blank shot on Hutchinson. Off the ensuing scramble, Stevens cashed in on Nielsen’s rebound for his second goal of the season.
With five minutes left in the third, Tristen Nielsen continued the Farm’s tradition of taking penalties late in the frame.
PK1: Wouters, Stevens, Juulsen, Brisebois
In a very captainly effort, Wouters forced a turnover while forechecking shorthanded to set up Stevens for a backhand attempt.

PK2: Keeper, Wolanin, Dowling, Lockwood
Lockwood single-handedly forced the Knights out of the offensive zone, then a penalty-killing tandem of Karlsson and Pederson managed to keep the Knights inside the neutral zone to hold Henderson to one shot on goal.
With a minute and change left in the third period, the Silver Knights pulled Hutchinson for the extra attacker.
With seconds left on the clock, Chase Wouters dropped low for a game-winning shot block that broke his stick and allowed the Canucks to clear the zone to end the Silver Knights’ late push and secure the victory.

The Farm team gets a well-deserved day off, then returns Saturday at 7 PM PST for ‘Country Night’ to close their six-game homestand!
Editorials
Recent articles from Cody Severtson