The anatomy of a reclamation project 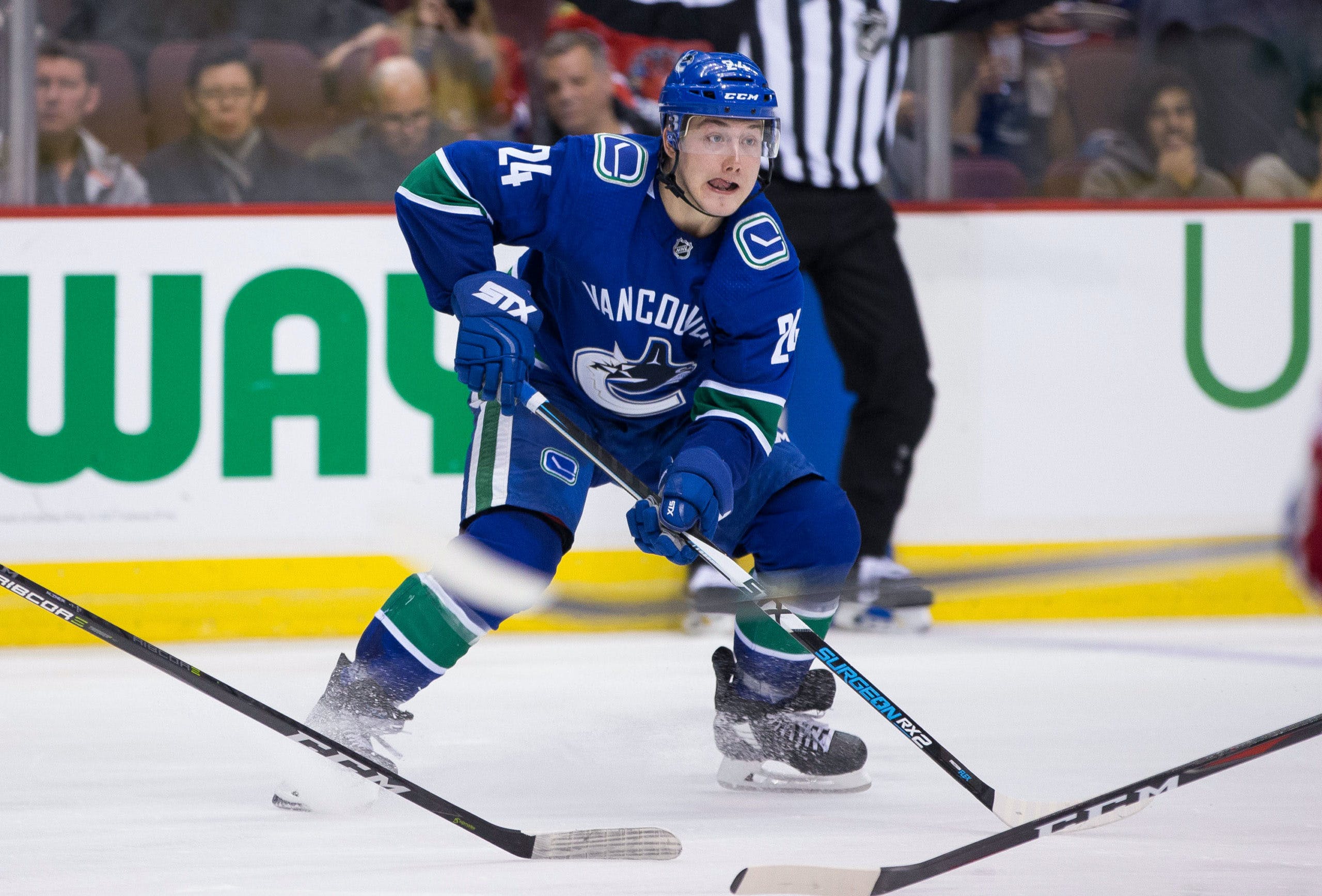 By Inglourious Capital
1 year ago
NHL teams are prone to bargain bin hunting for hidden gems. The Canucks themselves have adopted the reclamation project approach many times over Jim Benning’s tenure, looking for bargains with the likes of Derrick Pouliot, Sven Baertschi, and now, Matthew Highmore.
The reclamation project is a controversial move. When a player is available for cheap, it’s often for a good reason: the player just isn’t that good, and acquiring him doesn’t change that fact.
However, there is actually a route to a good reclamation project. It starts with a concept I talk about a lot here on the blog: the law of mean reversion.
The law of mean reversion says that outcomes deviating heavily from average will revert to average over time. A player scoring at an unsustainably high rate will eventually see his production tip to more normal levels, while a player whose scoring has run dry is likely to see better production going forward.
So why hasn’t Connor McDavid experienced mean reversion yet? Mean reversion is dependent on the degree to which an outcome is fuelled by luck. I’ll direct your attention to a couple of videos (again) featuring the great Michael Mauboussin on luck and skill. The first is on playoff performance, and the second is a more broad lecture on luck and skill:
As you can probably guess, a savvy GM isn’t grabbing bad players for cheap rates, rather, he’s looking for players that have played well but gotten unlucky. He can happily walk in and take the “problem” player off the selling GM’s hands for a well below-average cost and just watch the player improve with more usage.
To observe this effect in action, I’m going to do a study. We need two things:
I chose EvolvingWild’s relTM metric for the task. RelTM effectively isolates for team quality to grab a player’s impact on either goal differential or expected goal differential. The second is close to a measure of “pure skill” while the first has degrees of luck.
I took every NHL forward’s season over the last decade with a minimum of 300 minutes on ice, and I subtracted relative actual production from relative expected production to get my “value factor”. Next, I filtered out the players who had negative relative expected goal differential, and positive actual on-ice results, eliminating the bad players and players who aren’t unlucky enough to look bad.
Here’s how both scores look: 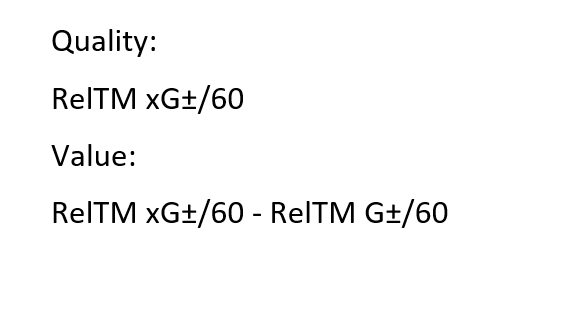 I used a ranked methodology to put the factors on even footing, and took the average of the two ranks to compile a list of the “deepest value” forwards of the last decade. To my pleasant surprise, Cody McCormick was ranked at the top of the list (dammit).
After that gaffe, the rest of the rankings were pretty sound. In the least scientific portion of this study, I took the top 100 reclamations to use as guinea pigs. For your interest, here are the top ten names and seasons: 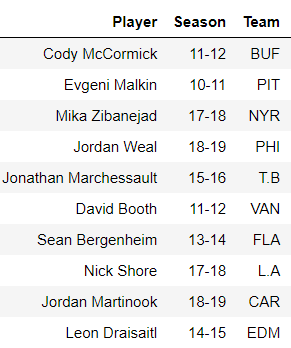 I’d like to remind you: the idea of this list isn’t to rank the “best” players. Rather it’s to determine who might be the biggest “bang for your buck” in terms of perception vs reality. Evgeni Malkin, though never available via trade, was one of the best “value bets” in that sense — he was a great player with outputs that didn’t reflect that fact. In 2011, he scored at a measly (for him) pace of 37 pts in 43 games, only to rebound in 2012 with a 107 point Hart trophy season.
One of my favourite parts of this study was searching hockey twitter for opinions on various list names. For example, here’s Jordan Weal:
Don’t worry Corey, you had a good reason to believe.
Nick Shore was exceptionally underrated:
Martinook for Selke:
Of my 100 top reclamation opportunities of the last decade, I decided to isolate a couple of things. How did production change? Which reclamations actually got traded for their misfortune?
On average, the list’s reclamation projects increased their points per 60 by 0.31 against a relatively flat change in the broad population. Keep in mind that this is partially skewed by top players being unable to really increase production, but those do represent a minority of all players. 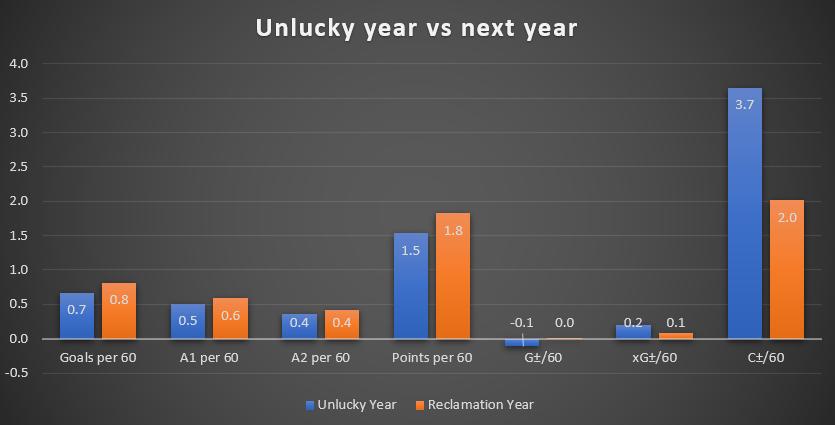 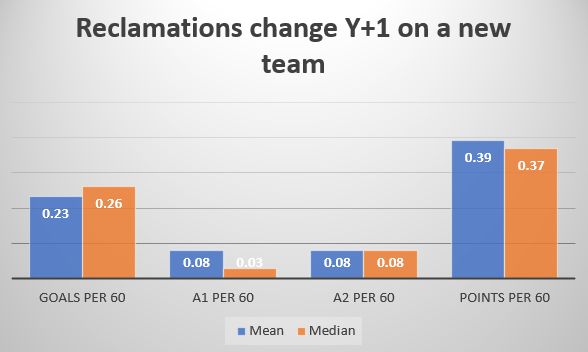 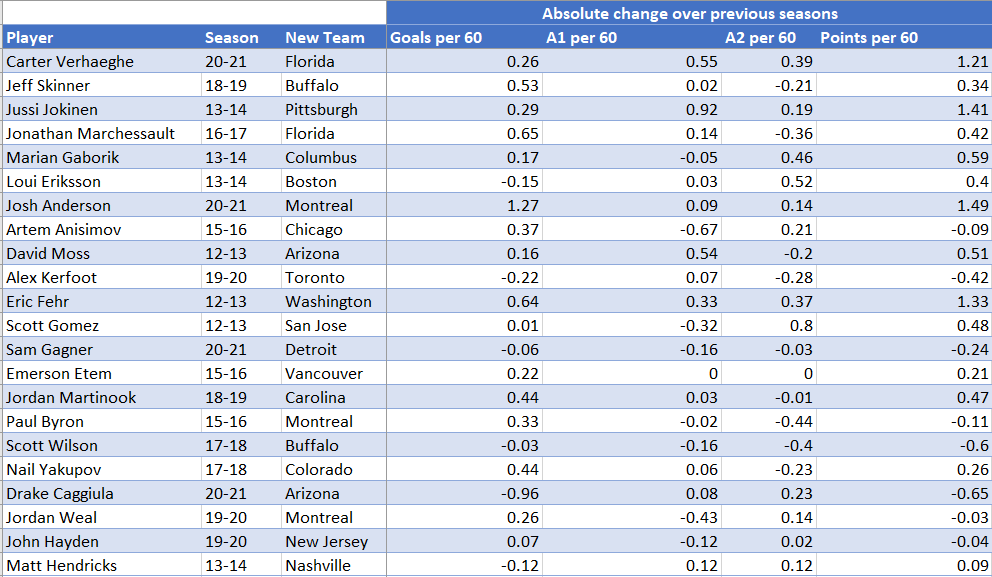 And here is the team with each player’s total points in the following season, sorted by per-game point totals: 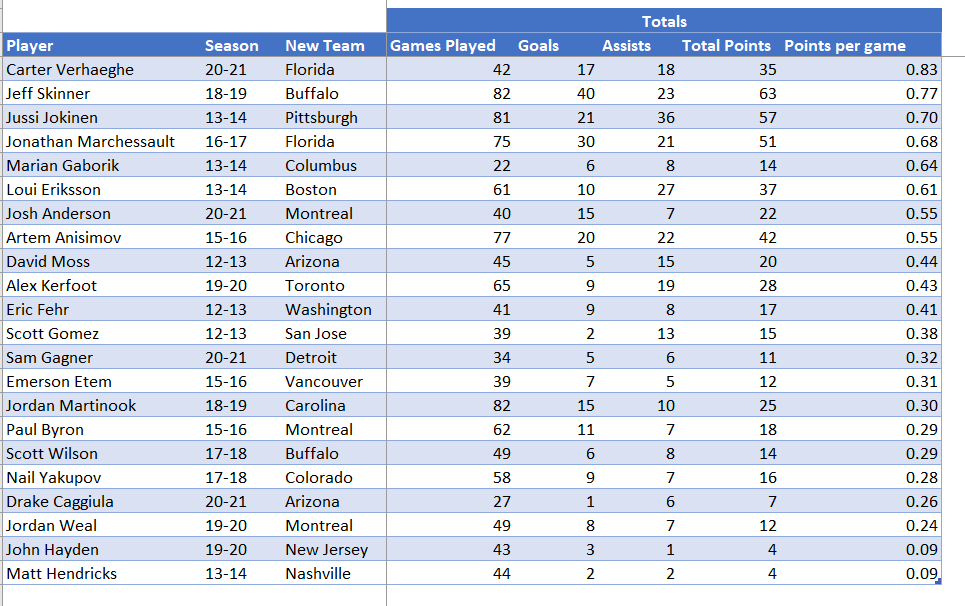 While I previously put Sham Sharron up against the Canucks amateur scouting department, I’m now inclined to have pro-scouting departments of various teams in the NHL take on “team reclamation” and its assistant captain Loui Eriksson (for what it’s worth, Loui’s failure to improve was a drag on reclamation’s performance).
Expect some writeups here on CanucksArmy on the art of the reclamation project in the future. While the reclamation list is imperfect, it gives me plenty of opportunities to try and refine the search for cheap players, and may yield value in the future.

To summarize the key findings in the study of the reclamations:
I’m not suggesting to pay through the nose for reclamations — in fact, I’m suggesting the opposite. The point here is to figure out which players might be unjustifiably cheap at a given point in time. The Florida Panthers have proven multiple times that reclamation projects can work, you just have to bet on some better luck.
Uncategorized
Recent articles from Inglourious Capital