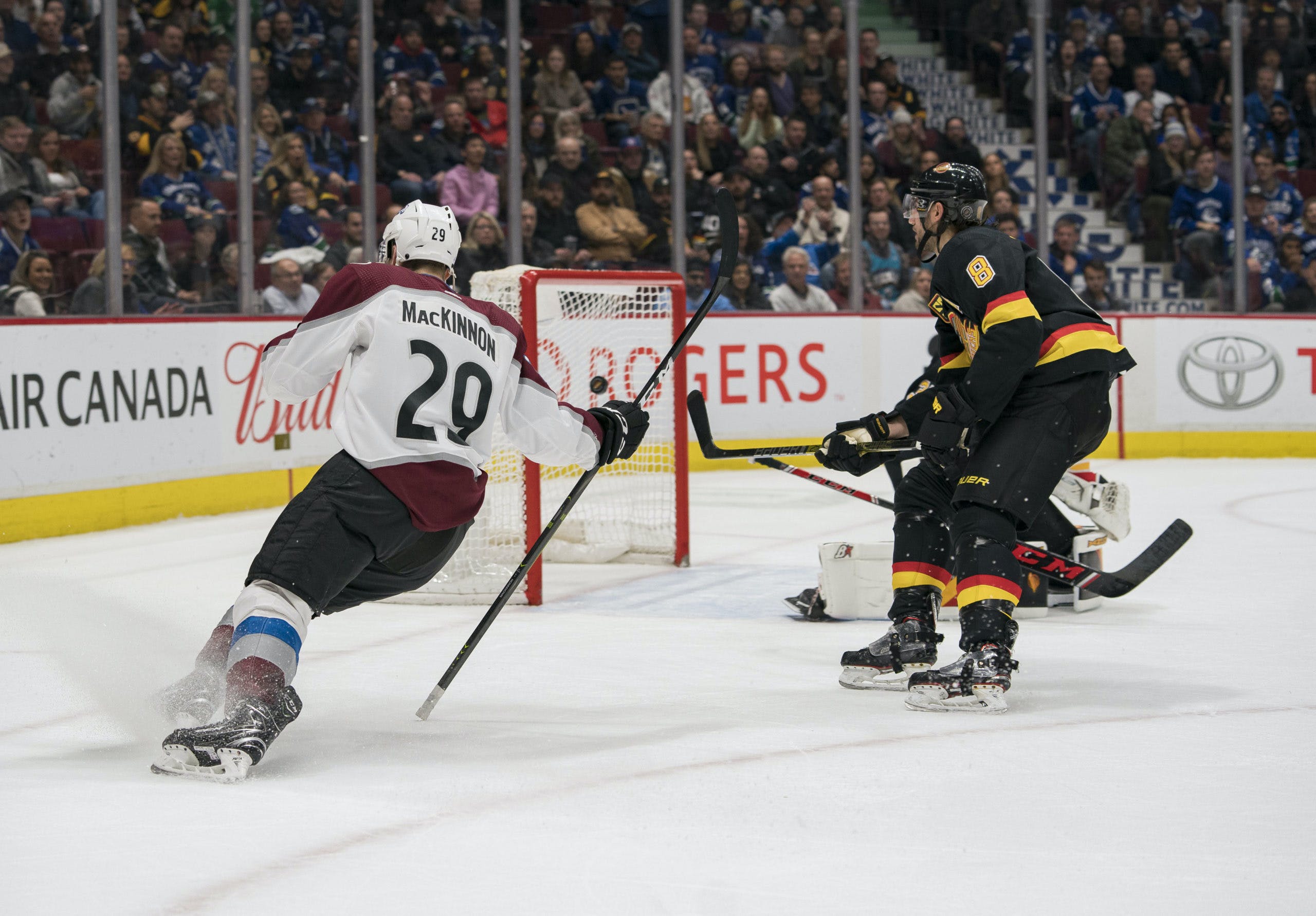 By Bill Huan
2 months ago
Both the Colorado Avalanche and Florida Panthers once occupied the league’s basement, similar to where the Canucks are now.
Shocking, I know.
What may actually come as a surprise, is that those teams continued to bottom out even after acquiring the superstar talent that has led them to the top of the standings. And with Elias Pettersson and Quinn Hughes still in their early to mid-20s, there’s a feasible path for the next great Canucks team to be built around them — as long as the club formulates an actual plan instead of making short-sighted win-now moves on a flawed roster.
Today, we’ll compare some of the rebuilds (yes, we’re not censoring the worst today) of the Avalanche and Panthers before analyzing how the Canucks can copy their approach in another article tomorrow morning at 7 AM.
Let’s dive in.

Season when they bottomed out: 2016-17
Core players on roster:
Key trades:
Notable signings:
The Avs just completed one of the most remarkable turnarounds in league history by winning the cup just five years after their historically bad 2016-17 season. It would be foolish to think that any other team can just follow some sort of blueprint and do the same, but there are still lessons that can be learned from their meteoric rise.
First off, they nailed their high lottery picks. Nathan MacKinnon, Gabriel Landeskog, and Mikko Rantanen were all already on the roster when they finished last in 2016-17, and the Avs continued to hit home runs by selecting Cale Makar and Bowen Byram in later years. Now, none of those were off-the-board picks, but it’s absolutely crucial to hit on lottery selections when you have the chance.
More importantly, Colorado made a trio of trades that brought in supporting pieces to supplant their star power. The most notable one is the Matt Duchene deal that allowed the Avs to select Bowen Byram in 2019 while also adding Samuel Girard from Nashville. Not only were they able to get younger, but the Avs managed to avoid the potential headache of re-signing Duchene to a bad contract as well.
With Makar in the system, Joe Sakic then traded Tyson Barrie to Toronto for Nazem Kadri to fill their hole at 2C. He also committed highway robbery by stealing Devon Toews from the Islanders in exchange for just two seconds, thus forming the best defensive pair in the league.
Lastly, Colorado cuts all telephone lines on July 1st — unless it’s for their own free agents. They resisted the urge of making a big UFA splash until last summer when Landeskog was re-signed, but that move only happened because the Avs’ window was (and still is) wide open. Interestingly, Sakic’s approach to UFAs has resulted in them never investing a large amount of term or value on goalies, and they’ve proven that contenders don’t need Vezina-level goaltending to win.

Season when they bottomed out: 2016-17
Core players on roster:
Key trades:
Notable signings:
The Panthers had a great season in 2015-16 where they finished 7th overall in the league, but then plummeted down to 23rd in the standings the following year. Looking back, that 2015-16 campaign was obviously an outlier, similar to the Canucks’ bubble run in 2020.
Fortunately for Florida, they were able to build a legitimate contender in the years that followed by making shrewd signings (except for one) and executing a number of key trades.
Yes, the Panthers made a catastrophic move by inking Sergei Bobrovsky to a seven-year, $70 million contract in the summer of 2019, but building a contender even with such an onerous deal on the books proves that it’s possible to recover and still compete — as long as the rest of the roster is filled with bargain contracts.
Specifically, Florida rectified their mistake by trading Vincent Trocheck and letting Evgenii Dadonov and Mike Hoffman walk. All three players had proven capable of scoring 70 or more points, but the Panthers managed to replace most of their production at a fraction of the cost by signing Anthony Duclair and Carter Verhaeghe before acquiring Sam Bennett from Calgary.
2020-21: Hoffman, Dadonov, Trocheck: 154 games, 119 points ($13.75 million combined AAV)
2020-21: Verhaeghe, Duclair, and Bennett: 96 games, 83 points ($5.25 million combined AAV)
Instead of adding sweeteners to offload Bobrovsky, Florida held on to its assets and used them to acquire Sam Reinhart in 2021 and Claude Giroux at last year’s deadline. Both additions were also made possible due to the bargain contracts that the Panthers had, and they’ve extended their window once again by trading an aging Huberdeau for Matthew Tkachuk, who’s younger and signed to a better contract.
Ultimately, the Panthers have constructed a contender by making smart bets on younger and more cost-effective players, even while having Bobrovsky’s $10 million anchor on the books.

Don’t be afraid of trading away good players or let them walk for nothing
When building a team, it’s natural to want to hold on to every good player on the roster, but letting some of them go could prove more beneficial long term. Neither the Avs nor Panthers would be at the top of the standings if they didn’t trade away Duchene and Trocheck.
The even tougher decision, though, is letting players walk in free agency instead of re-signing them. The decision not to deal them at the deadline could make teams feel like they need to bring those players back, but the extra cap space that is saved from letting them walk is oftentimes more valuable than having the actual player.
Picks and cap space are king
Without sufficient cap space, teams don’t have the ability to take advantage of other cap-strapped clubs that must shed cash. The Devon Toews deal is a prime example of the Avs pouncing on a unique opportunity to add a top player for cheap, but they couldn’t have done it without draft capital.
In today’s NHL, picks are unquestionably the easiest tradable asset and one of the most sought after, too. It’s easy to see why: teams don’t need to worry about adding a contract to their books (yet) and it gives them the ability to freely choose who to select as well, should they choose to use it.
In essence, picks are like the NHL’s version of cash. Who doesn’t like that?
It’s fine to have one bad contract on the books
This section might sound contradictory considering what was just discussed, but the Panthers have proven that it’s possible to still contend even with an onerous contract on their cap sheet. The key to doing so is by being as diligent as possible with the team’s remaining cap space, and not having to get rid of a bad deal also means keeping assets (especially picks) that can be used elsewhere.
Take flyers on cheap, high-upside players
The Panthers have proven to be masters at mining value for cheap, with the additions of Duclair and Verhaeghe being the most notable examples. However, it’s important to remember that for every Duclair, there will also be a player such as Alex Wennberg, who doesn’t pan out as well.
That shouldn’t be a problem, though, as long as the contracts given out are both cheap and short-term. This allows teams to take as many rolls of the dice as possible, thus increasing the likelihood of finding diamonds in the rough.
Tomorrow at 7 AM, we’ll examine how the Canucks can apply these lessons to their own current situation.
Editorials
Recent articles from Bill Huan