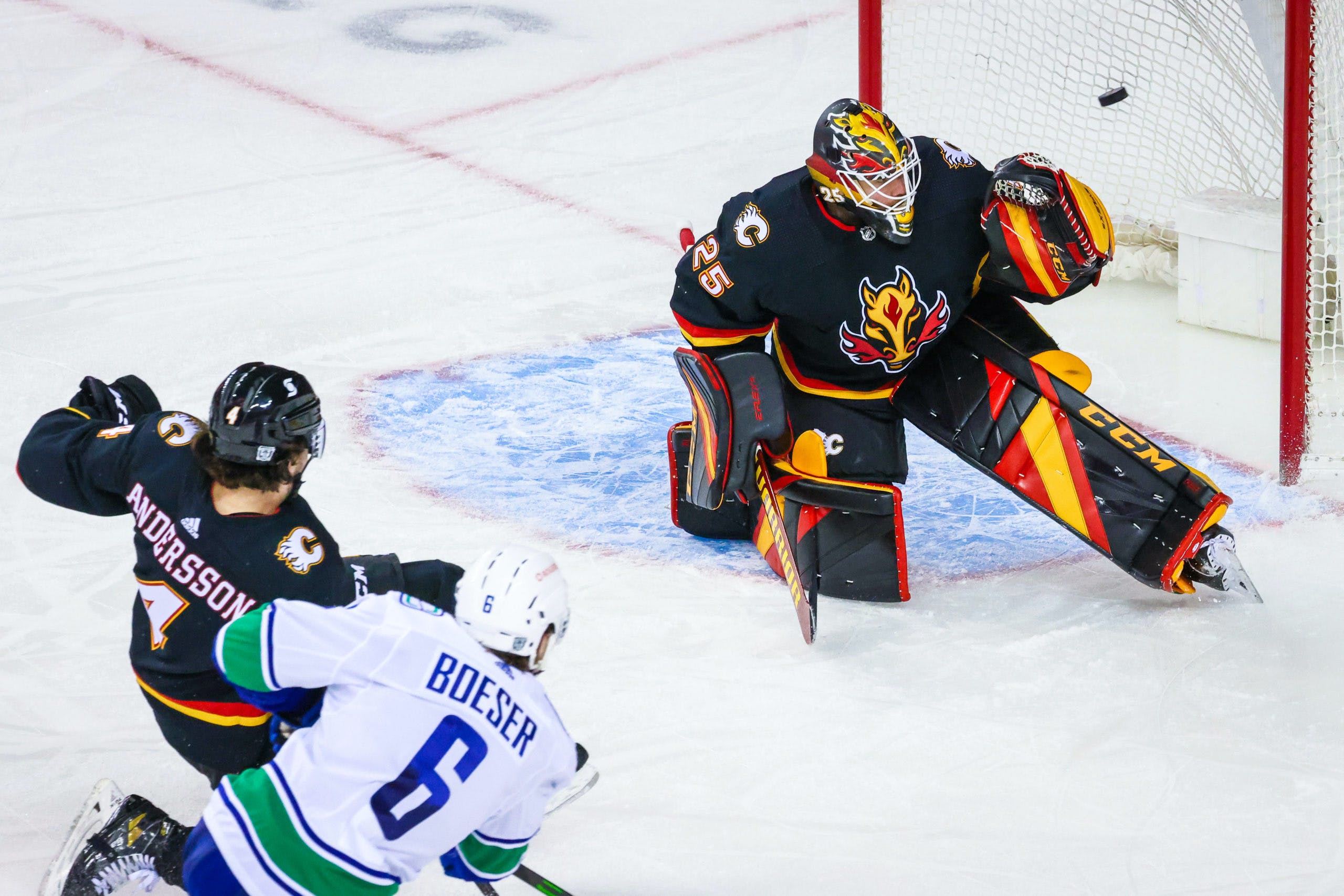 By Shu Lei Wu
1 year ago
The youthful exuberance that surrounded Brock Boeser’s rookie season was a breath of fresh air for Vancouver Canucks fans, who at the time were resigned to their fate of watching an ageing core struggling to make the playoffs, all the while knowing that the Canucks didn’t exactly have a cupboard full of exciting, elite prospects beyond Boeser.
Since then, the arrival of Elias Pettersson and Quinn Hughes into the limelight as the faces of the franchise has allowed Boeser to take a bit of a backseat. After being lauded as a potential 40-goal scorer following his rookie season, Boeser has yet to match or exceed his 29 goal tally that he reached back in 2016-17. Usually, if you’re able to select a perennial 20+ goal scorer late in the first round, that would be considered a home run. But because of Boeser’s excellent collegiate record and rookie season, as well as the new expectations that accompanied such success, fans struggled to grapple with the dip in goal production in subsequent years.
Alarm bells were rung after his 16-goal campaign last season (although he would’ve been on pace for 23 over an 82 game span) and there was widespread speculation of potential trade rumours over the course of the season.
This season, however, Boeser has already found twine 12 times, good for second in the NHL, and is on pace for 34 over 56 games in the pandemic-shortened season, or 49 tallies over the span of a regular 82 game schedule. He’s also leading all Canucks forwards in points with 21 over 20 games, or over a point-per-game pace.
What’s encouraging to see is that this has come with the addition of improvements in his two-way game and playmaking abilities. Beyond these improvements, however, his bounce-back campaign so far should always have been expected, and here’s why.

Boeser was always a clear bounce-back candidate after last season. The former Calder-finalist posted an (Individual Points Percentage) IPP of 55.6%, below his career average of 67.8% and league average of ~68% for forwards. Most of this can be simply attributed to plain bad luck, as IPP is a measure of a player’s point participation in his team’s goals while they are on the ice.

Via Natural Stat Trick
Boeser also underperformed his ixG by roughly 2 goals last season and his shooting percentage dipped to a career-low of 9.5%, which is surprising considering his elite-level shot. Given his ability to release quick, accurate shots from anywhere in the offensive zone, it shouldn’t come as a huge surprise that he’s bounced back in a big way. The stats back up the eye test in that Boeser has always been an elite-level finisher, as he scored 59 goals between 2016/17 and 2018/19 on an ixG of only 36.5.

Via Natural Stat Trick
Obviously, deployment and ice-time should be taken into account, but it’s encouraging to see that Boeser is leading a group that includes the likes of Horvat, Pettersson, and Miller. In fact, Boeser’s 26 high danger chances in all situations are good for 13th highest in the NHL. To find out what’s changed, we’ll dig a little deeper into his play at 5-on-5 and on the power play.
5-on-5
The Lotto Line’s early-season struggles have been well documented. The trio hasn’t completely regained the dominant form that terrorized teams across the league last year, but they’ve improved enough in recent weeks to finally be above water in terms of shot share metrics. Boeser, for his part, has scored 7 goals during 5-on-5 play at a team-leading rate of 1.6 goals/60 while taking 6.9 shots/60.

Via MoneyPuck
What’s immediately noticeable in the chart above is that Boeser’s 5-on-5 scoring efficiency is at an all-time high, despite shooting at a lower rate compared to previous years. Granted, he is shooting at a 23.3% success rate at evens, which is unsustainable even for him. But you can tell from his 83.3% shots on net percentage that he is getting cleaner looks compared to previous years when in a shooting position by either getting open for his teammates to find him or creating the space himself.
His shots on net percentages have risen steadily since his sophomore year (2018/19), which makes sense given that teams zoned in on him after his remarkable rookie year. With the emergence of Pettersson as another attacking option, however, Boeser has now been afforded more space to get his shots off and on target. His xG/Shot is only marginally higher this season, but he’s now finally finishing at a far better rate and at a rate that you’d expect for a sniper like Boeser.
Turning to the eye test, we can recognize a few examples of how Boeser has scored his goals at 5-on-5. Although Boeser’s line hasn’t been able to establish the terroritorial advantages in the offensive zone they enjoyed for much of last season, Boeser has been positioning effectively to find chances off the rush. Against both the Oilers and Senators, he was able to get in behind the defence and streak down the right wing before beating the goalie on a clean look with a well-placed shot.
Boeser’s goal in the final home game of the series against the Flames was also quite similar to the two above. He was again able to get behind the defence, but this time was closed down and forced to release a backhand shot off before burying the rebound. This chance wasn’t as clear-cut but shows how Boeser has been able to consistently position himself behind the defence on rush chances to give himself a scoring opportunity.
Boeser’s ability to get behind the defence and score off the rush was something that we saw quite often in previous years and didn’t see enough from him last season. If he’s able to continue finding pockets of space behind the defence to rush into, he’s one of the league’s best players at beating goalies clean and you can bet he’ll capitalize more often than not on his chances.

Boeser was a mainstay on last year’s league-leading first power play unit until the arrival of Toffoli, who displaced him to the second unit. This year, Boeser has resumed his spot on the first unit, but his role has recently shifted into the net-front position — the same spot he played in during the playoffs in Toffoli’s absence.
The Minnesota native has found a fair amount of success in this new role and has cashed in 3 times while posting a 2.1 goals/60 on the top unit despite seeing his shooting rate drop a bit lower than in years past.

Via MoneyPuck
A big reason for this uptick in goal efficiency for Boeser on the power play is because of his net-front position. His average shot distance is the lowest it’s ever been (excluding his 9 game cameo at the tail end of 2017), and as one might expect, the closer you are to the goal, the more likely you are to score. This is also reflected in his xG/Shot data, which has also increased significantly this year, meaning that each time he does shoot, the quality of the scoring chance is much higher.
In fact, Boeser has been the most dangerous weapon in Vancouver’s arsenal of power play options, as he leads the team with 12 iHDCF on the man advantage. That places him 5th in the NHL, above the likes of Connor McDavid and Leon Draisaitl who sit at 10 HDCF each.
An easy way to visualize the impact of his change in position is using a shot map, as shown below. 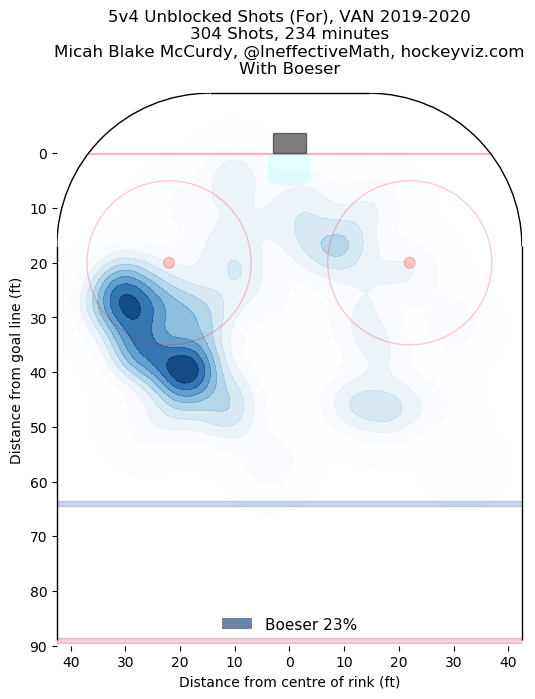 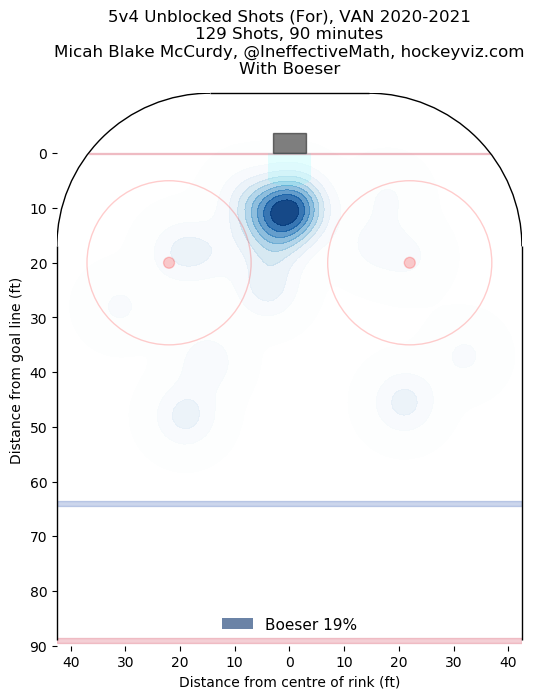 The Canucks usually set up their power play in a 1-3-1 formation, with Hughes as the QB, Horvat in the bumper, and Pettersson on the right of the three. Historically, Boeser has set up on the left side of the three to provide a one-timer option, but Miller’s success running the left side has shifted Boeser into the net-front spot, forcing him to utilize a different skillset.
When the puck is high at the point, Boeser’s role is to screen the goalie and free up his stick for a potential tip. He does this well against the Leafs, and is rewarded for it late in the game.
The net-front position also requires Boeser to open up as a passing option at the side of the net when J.T. Miller has the puck on the left side half wall. This option opens up the quick one-two play between Miller, Boeser, and Horvat that the Canucks have cashed in on multiple times this year. If, however, the opposing defenceman cheats and positions to defend a pass back to Miller or Horvat, Boeser has space to cut inside himself and shoot, as he did against the Senators in the clip below.
Overall, Boeser’s revamped role on the first power play unit has allowed him to score at a more efficient rate while also allowing the first unit to capitalize on Pettersson’s strength as a one-timer option and J.T. Miller’s ability to run the power play on the left-hand side. In the last game against the Flames, Boeser and Miller switched positions, but Boeser has already shown how he can fit into the net-front position seamlessly through his dexterity and the range of his offensive skill set, and he’s being rewarded for it. This shouldn’t be too much of a surprise, however, given that Boeser played a similar role on the power play in the bubble and was successful there too.

Boeser’s re-emergence as one of Vancouver’s premier goal threats has been a bright spot in an otherwise poor start to the season for the Canucks, but his bounce-back was something that should have been expected. Although one can reasonably expect him to slow down a bit after such a blistering start, it’s been encouraging to see a healthy and dangerous Boeser on the ice this year after a couple of injury-riddled seasons. Both Boeser and Canucks fans will hope that his scoring prowess will continue as the Canucks look to break even on the campaign.
Uncategorized
Recent articles from Shu Lei Wu