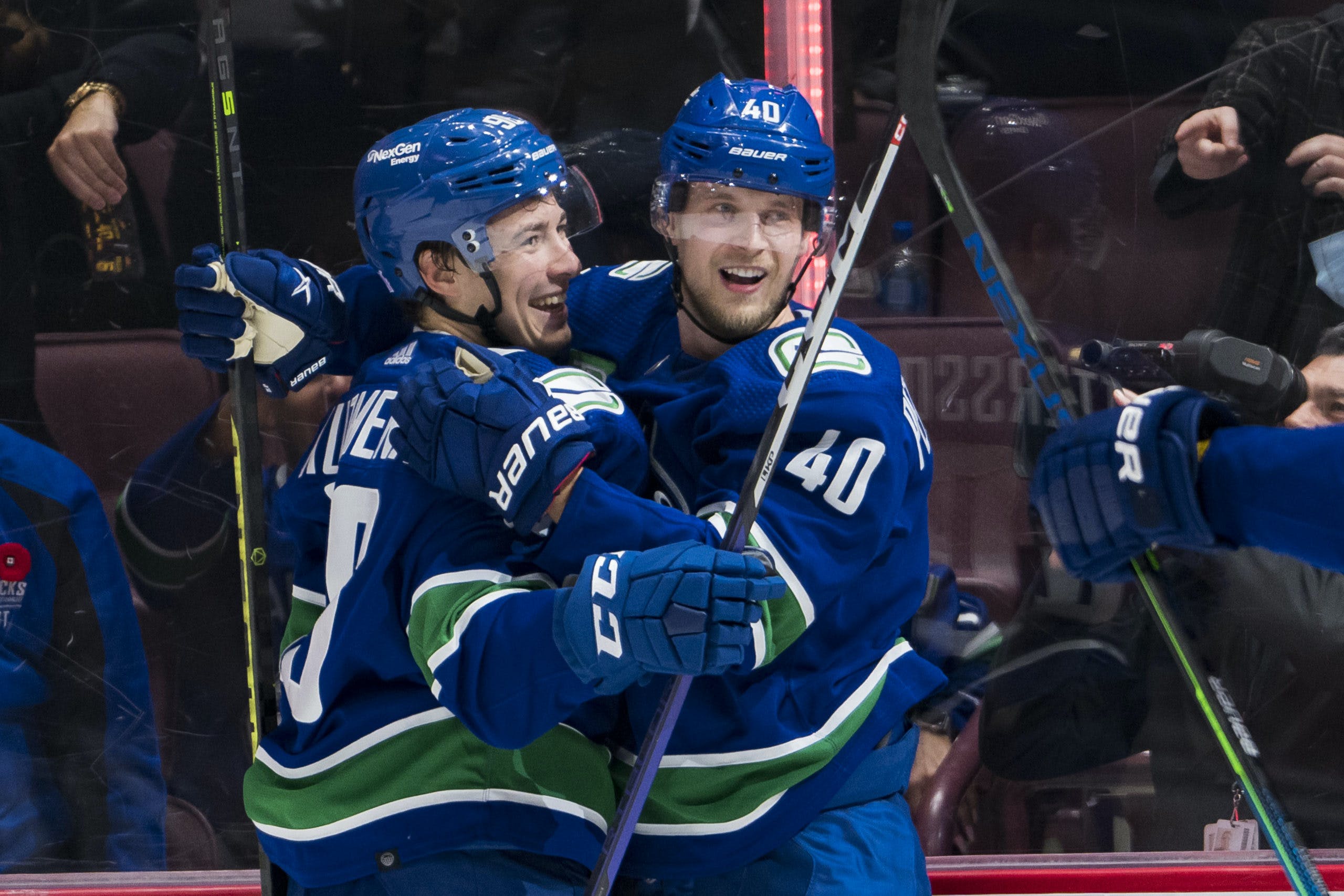 By Noah Strang
25 days ago
While the Vancouver Canucks start to the 2022-23 NHL season has been disappointing to say the least, there have been a few bright spots. Two of the players that have exceeded expectations to start the season are Andrei Kuzmenko and Elias Pettersson. Part of the reason they’ve found so much success is that the two players have developed some instant chemistry together.
As a duo, their results have been much better than when separated from the other player. The Canucks have controlled play with the two on the ice together at 5-on-5, registering strong advanced metrics over what’s becoming a larger sample size by the game.

5-on-5 stats for Andrei Kuzmenko and Elias Pettersson this season. (NaturalStatTrick)
As you can see from the stats above, the Canucks have struggled when Kuzmenko and Pettersson are separated, but thrive when the duo is together. This trend remains constant across the vast majority of statistical categories, including both traditional stats and advanced analytics.
Since the Canucks have seemingly struck gold with this pairing, the next problem naturally becomes figuring out who will ride shotgun. The Canucks have a plethora of wingers to choose from to add to these two which is both a blessing and a curse as it makes it more difficult to find the perfect trio.
So who should the Canucks put next to Kuzmenko and Pettersson? Should it be the high-flying Ilya Mikheyev, one of the most popular choices for coach Bruce Boudreau thus far? Should it be sniper Brock Boeser? Or should it be someone else? Let’s take a look at some of the top candidates.

Ever since returning from injury, Ilya Mikheyev has been a popular choice to ride shotgun with Kuzmenko and Pettersson. Signed this offseason, Mikheyev brings a quality that you can’t teach: blazing speed. His skating ability allows him to be an effective forechecker and separate defencemen from pucks, as well as break away in transition for scoring opportunities.
The three have now played just over 54 minutes together at 5-on-5 and the results have been encouraging. The Canucks have outscored opponents 7-2 during that time and are controlling 61.09% of the expected goals. While it’s still a small sample size, it seems as if the two Russian wingers complement Pettersson.

While he’s been in and out of the lineup this season due to injury, Brock Boeser is one of the best Canucks wingers and an important piece of the team’s core. After making a sizeable financial commitment to Boeser, the Canucks are going to want to put him in the best position to succeed. While he has certain skills where he’s among the best in the league, he also has some serious flaws, and effectively planning a line to hide those flaws while accentuating the positives is the key to getting the most from Boeser.
Boeser hasn’t played a significant amount of minutes with this duo so far this season. In terms of how their games would mesh, Boeser and Pettersson have shown chemistry in the past. As a natural sniper, Boeser would compliment Kuzmenko’s net-front presence and draw attention, allowing the Russian to get open for those backdoor chances we’ve been seeing. However, this line might struggle when it comes to defending as neither Boeser nor Kuzmenko are known for their play in their own zone.

Last season, Vasily Podkolzin broke into the NHL successfully and had a great rookie season, improving as the year went on. His steady improvement as the season went on had many picking him as a breakout candidate for this year. However, during the early part of the season, he has been very disappointing and has even found himself in the press box. Perhaps playing alongside Kuzmenko and Pettersson could be just what he needs to get back on track.
The three have played around 25 minutes of 5-on-5 time together this season. While that’s not a huge sample size, it’s more than most of the other players on this list. During that brief time, the Canucks controlled play in terms of expected goals and shots yet were outscored 3-0. Giving this trio a longer look together would be a good idea as it seems likely they were just on the wrong end of some bad puck luck.

An interesting option for the Canucks could be to go with a player like Conor Garland who’s a puck-possession monster. While a line with Pettersson and Garland may not have very much muscle, they would be extremely difficult to take the puck away from and likely spend a lot of time in the opposing zone.
Over the 2021-22 and 2022-23 NHL season, Garland and Pettersson have played more than 365 minutes together at 5-on-5. During those minutes, the ice has been fairly even as the Canucks have scored 17 goals while conceding the same number, as well as posted a 51.84% GF%. The two don’t feel like the most natural fit and it seems as if the Canucks might have better options elsewhere.

Last but not least, Nils Höglander could be a good fit next to Pettersson and Kuzmenko. With those three together on the ice, there would always be the potential of the defence looking silly. All three have insane puck skills, are very shifty, and can make a highlight reel play in the blink of an eye. Of course, they all share some similar shortcomings too which would make this line a struggle to deploy against bigger, aggressive lines.
Höglander can struggle to finish scoring chances and that’s not a good quality to have when playing with Pettersson. He’s a very gifted passer and can set players up from all around the ice. However, he needs someone to receive those passes and put them in the back of the net.

Of all the Canucks wingers that could play with Pettersson and Kuzmenko, the most natural fits feel like Mikheyev and Podkolzin. These two Russian wingers each bring an edge that makes them effective forecheckers and puck retrievers, a good complimentary skillset for this line. Boudreau has done a good job at going with Mikheyev but if he wants to get Podkolzin back in the lineup and help him gain some confidence, this could be the place to use him.
Editorials
Recent articles from Noah Strang