By Bill Huan
13 days ago
We’re now more than halfway through the 2022-23 NHL season, and Bo Horvat is still on pace to score more than 55 goals.
At this point, it’s not just a hot streak anymore. The Vancouver Canucks’ captain has turned himself into one of the league’s most feared goal scorers, and he’s miraculously done this in his late 20s.
To see how Horvat has made such an unexpected breakthrough, we re-watched every goal he’s scored since the beginning of the 2021-22 season. Unsurprisingly, he’s made some adjustments that have taken his game to the next level.
Here’s what we found.

To help see what has changed in Horvat’s game, we thought it would be smart to analyze his play before and after he became a goal scoring machine.
For the majority of the 2021-22 campaign, the Canucks’ captain scored at his usual pace. In the first 52 games of the season, he potted 17 goals — a 27-goal pace over a full season. That’s right in line with his career norms: Horvat averaged between 26-28 goals (per 82 games) from 2017-18 until last year.
Here’s how he scored those 17 goals:
Note: deflections are anything that goes off his body rather than stick. If it was the latter, then it would be categorized as a tip.
Over that span, Horvat was expected to score 14.3 goals and his shooting percentage (12.2%) was slightly below his career norms. In other words, nothing was way out of line, and there was no indication that he would soon break out.
The way in which he scored also didn’t stand out, given a large percentage of his goals came from ordinary wrist shots off the rush.
The only slight surprise from this sample is that it took him until game 38 (January 16th, 2022) to pot his first power play goal from the bumper. Given how long he’s been deployed there and the success he’s had, it’s fair to say that Horvat was snakebitten on the PP.
As we’ll soon see, though, he would make up for that over the last 18 games of the season.

Horvat’s heater to finish last year is well documented. He scored 14 goals in just 18 games, but the more interesting aspect is the way in which he filled the net.
Although Horvat was due for some better luck on the PP, having six of his 14 goals come from the bumper or via empty nets was a bit fortuitous. The numbers bear it out too: Horvat had a scorching 25% shooting percentage and scored five more goals than expected over those 18 games.
With hindsight, though, those goals from the bumper were actually a sign of things to come. More specifically, Horvat has drastically improved his snapshot, which is similar to the types of shots he takes on the PP.
Just take a look at this goal he scored using a quick snapper.
Now compare that with the one we showed from before his breakout. This second goal came off his stick with considerably more power, and Horvat was able to get it off quicker too. It shouldn’t be a coincidence, then, that he didn’t score a single goal using a wrist shot over those final 18 games, considering his newfound success with other types of shots.

Horvat’s scorching end to last season might’ve seemed like a hot streak at the time, but he’s proven this year that it was only a sign of things to come.
Through 43 games this season, the Canucks’ captain already has 30 goals — just one fewer than he had in all of 2021-22, which was also his career-high. Four of those goals have come from his now patented snapshot, which has now become one of his go-to moves.
It shouldn’t be surprising, then, to hear that he overhauled his equipment over the summer. Thomas Drance of the Athletic recently wrote a story detailing how Horvat’s decision to use a lower flex on his stick has made his shot more unpredictable and has given it more “zip.” This is noticeable in goals like the one below, which is eerily similar to the one shown in the previous section.
Outside of his snapshot, Horvat has also added a new weapon to his arsenal: tips. Just take a look at the types of goals he’s scored this season:
In fact, Horvat leads the league in tip-in goals (fun fact: the player in second is Andrei Kuzmenko!), a skill that was rarely seen from him in the past. Many of the league’s best tip artists score at the net front, but Horvat has actually potted most of his goals further away from the crease and in the middle of the offensive zone.
With that said, he’s equally capable of tipping from the crease, and Horvat has potted two such goals by changing the angle and using his backhander.
The important takeaway here is that Horvat isn’t a one-trick pony. With space, he’s able to cleanly beat goalies using a deadly snapshot, but he’s also become elite at tips from different distances and angles from the net. These are good signs that he’ll be able to continue scoring at a high rate for the rest of this season and beyond, even if his current 57-goal pace is a bit far-fetched.

Okay, but what does this mean for Horvat’s future?

Analytically, Horvat’s scoring is unsustainable. His 23.3% shooting percentage is 7.3% higher than his previous career-high from last season, and it’s almost 10% higher than his career average of 14.1%. He’s also scored 12.7 more goals than expected (only Connor McDavid and Tage Thompson have outperformed their expected goals number to a larger degree), and Evolving-Hockey’s RAPM charts show that he has been running too hot both at even strength and on the power play. 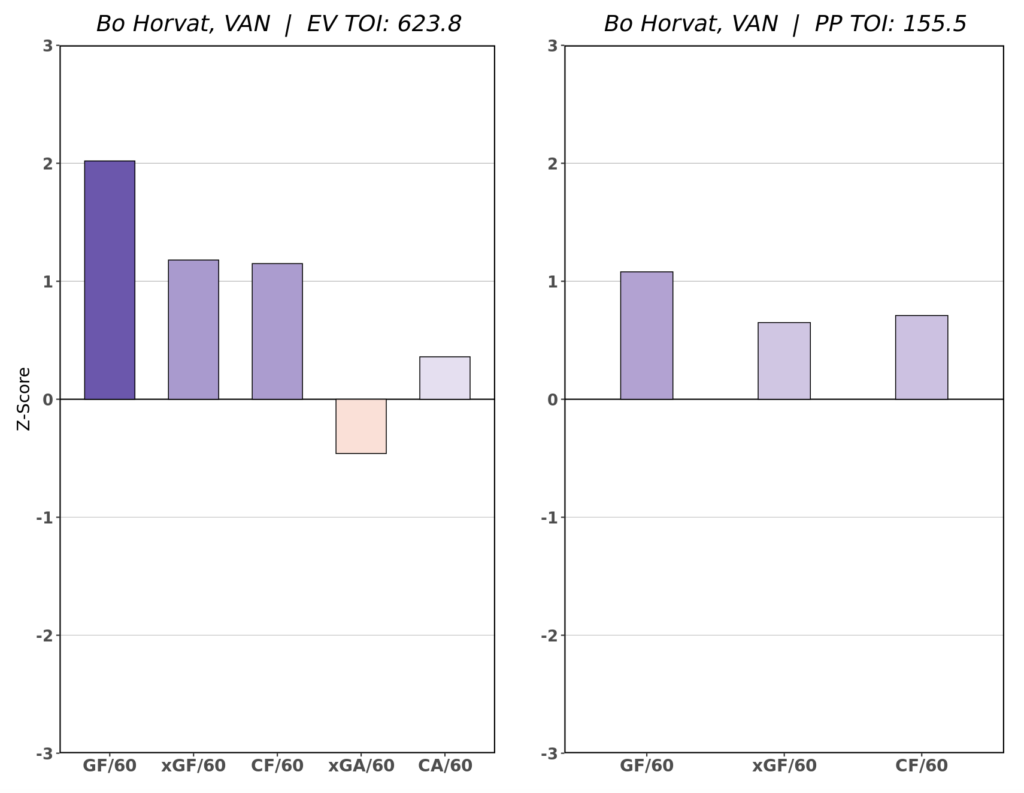 Even so, Horvat has also become an elite finisher, and history tells us that these types of players can routinely outperform their expected goals totals to a large degree. 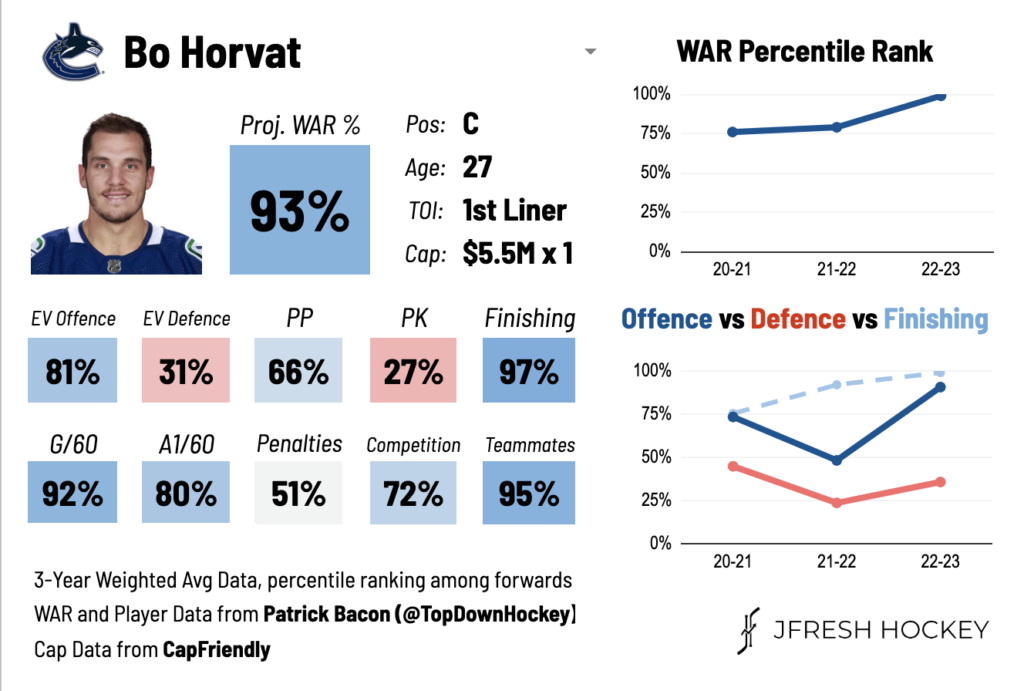 Will he sustain his current pace and flirt with 60 goals? Probably not — only McDavid, Matthews, and maybe Ovechkin realistically have a shot at such gaudy numbers in today’s league. But with the head start Horvat’s given himself, he has a very good chance of potting 50, and 45 is a shoo-in at this point.
Considering the way in which he scores, Horvat should be expected to hit 35-40 goals consistently moving forward. Very few of his goals this season have been flukey or come off of easy tap-ins, and tips are arguably the hardest shots for goalies to save given their unpredictable nature.
The best comparable for Horvat is undoubtedly Chris Kreider, who scored 52 goals last season at the age of 30 when his previous career high was 28 (although he did have multiple seasons when he was on pace for more). Kreider’s production has unsurprisingly dropped off slightly this year, but he’s still on pace to score 37, which is a realistic number for Horvat to hit in future seasons.
In short, the changes that Horvat has made to his game and equipment have turned him into a consistent 35-40 goal scorer. Given his clinical finishing ability and the fact that a large percentage of his goals come from tips and the bumper spot (both of which are stationary positions), Horvat’s goal-scoring should age quite nicely. As a result, a potential long-term contract for him might age better than we previously thought, but the Canucks should still trade their captain, given the team’s salary cap issues.
It is a shame, though, that the club needs to part with Horvat during the midst of his breakout. Regardless, it shouldn’t be hard to root for him given the loyalty and leadership he’s provided to the team.
Just don’t be surprised to see Horvat continue to score at a blistering pace for years to come.
All stats from Natural Stat Trick, Evolving-Hockey, and JFresh.
Editorials
Recent articles from Bill Huan