Analyizing Luke Schenn’s value to the Canucks, and why he ultimately wasn’t dealt at the deadline 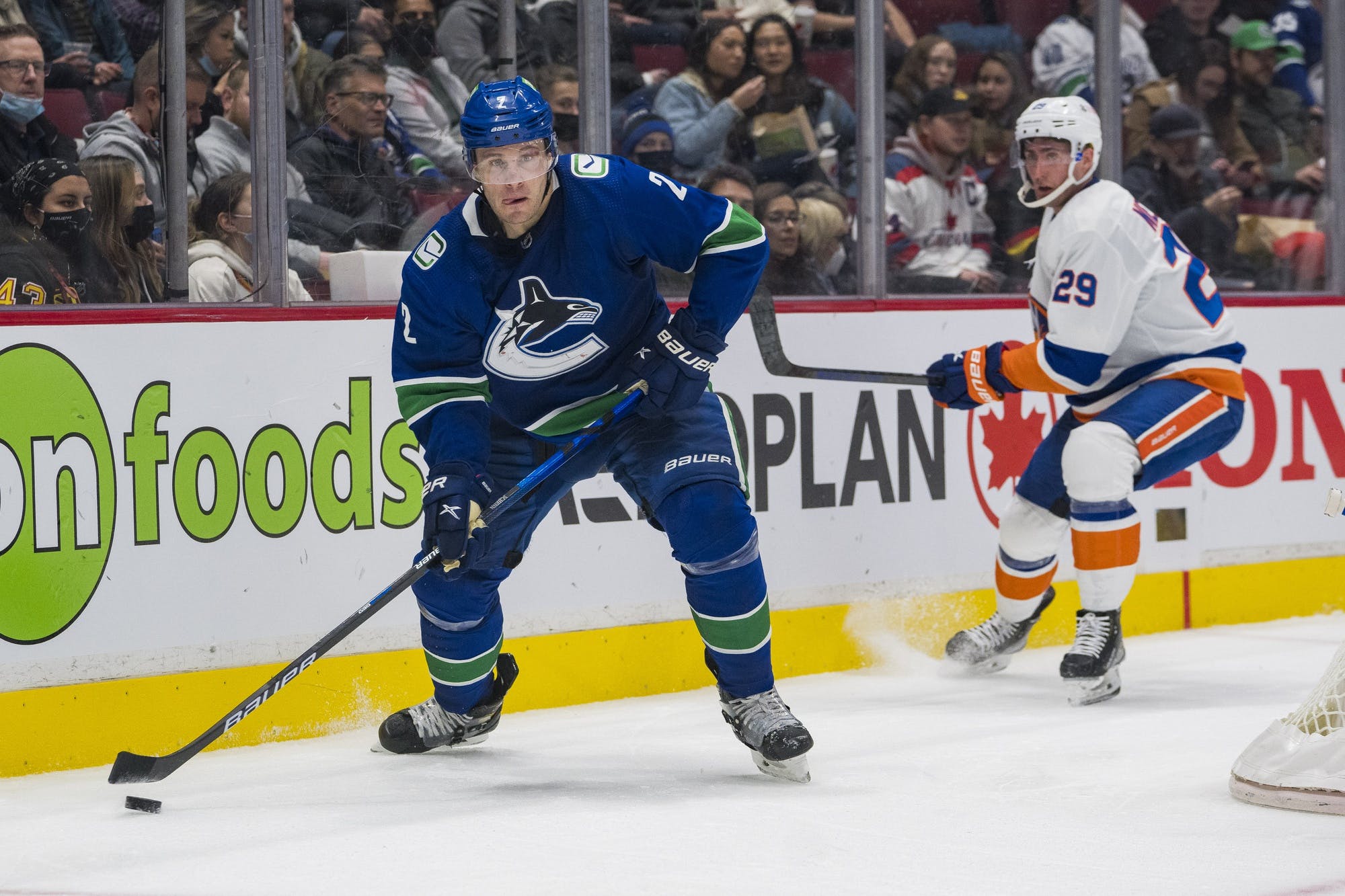 By Colton Davies
10 months ago
Back-to-back Stanley Cup Champion Luke Schenn has become a key component of the Vancouver Canucks’ blueline. Schenn poses a threat with his physicality and shutdown abilities and has been playing some of his best hockey in years and has become incredibly valuable to the Canucks.
So valuable that the club ultimately decided he was worth keeping at the 2022 Trade Deadline when teams came knocking.
Let us walk you through it.
In 48 games so far this season, Schenn has 13 points (3 goals, 10 assists). That is the highest point-total number he has produced since 2015-16. He is on pace to flirt with 20 points- which would be the highest since his days with the Toronto Maple Leafs in 2011-12 when he registered 22.
His plus-minus is the highest it’s ever been in his career +14 and he leads the team in hits with a whopping 196 on the season. Schenn is not all meat and potatoes though, which is part of the reason why he has become so valuable to the Canucks.
According to Dobber Frozen Tool’s advanced stats, his expected goals for at 5v5 (xGF) sits at 49.51%, his PTS/60 is 0.9, and his xGA/60 is 27.08.
Ultimately, when Schenn is on the ice, the Canucks are controlling 45.6% of the shot attempts, and the quality of chances they’ve given up with him on the ice have been largely been low-percentage ones. Analytically, Schenn is having one of his best seasons in recent years. His pairing with Quinn Hughes has been a match made in heaven and he has directly benefited from playing on a line with him.
Hughes’ game has also elevated with Schenn at his side. Hughes’ CF% with Schenn on his pairing is 55.47% and without him sits at 50.84%. When you have a physically imposing defender like Schenn paired with an elite-offensive talent like Hughes, it allows for Hughes to gain more control of the ice and create more chances.
It’s almost as if Schenn is his bodyguard, an opposing player knows that if they try to run Hughes while he is making a zone-entry, they will have to answer to Schenn. Recently, he stuck up for fellow defender Brad Hunt after taking a hit from Washington Capitals forward Garnet Hathaway, Schenn skated right up to Hathaway and challenged him, but he declined. That’s the type of mentality Schenn has, you do not mess with his teammates.
“I just like that you know what you’re getting from him defensively,” said Hughes on the fit with Schenn. “He’s not worried about getting up in the play or anything, he just wants to be solid. I think he’s got a good brain for the game too. He’s smart, and I don’t think he gets enough credit for that. He’s really been working on his game the last couple of years and I can see that. He helps me just as much as I’d like to think I help him.”
With Schenn having a solid campaign, he had gained interest from around the league heading into the trade deadline. Minnesota loaded up acquiring tough guys Nicolas Deslauriers and Jacob Middleton. Meanwhile, the Florida Panthers went after shutdown defender Ben Chiarot, some had wondered if the Canucks would make a deal involving Schenn considering the price tag these players were going for on the market.
Ultimately, GM Patrik Allvin and the Canucks chose not to part ways with him. Rightfully so, as Allvin was vocal in a recent press conference about what Schenn means to the organization.
“I have a lot of respect for Luke Schenn as a player and more as a person and what he means to this club off the ice, in terms of being a winner, the culture, the commitment he has to being a pro every day,” the Canucks’ GM said. “For me, it’s extremely important for this young group to have a guy like Luke Schenn around.”
He provides a physical presence on the ice, and is always willing to lay the body and stick up for his teammates. He has a hard nose and is a complete gamer when playoff time rolls around. He provided the Bolts with valuable insurance and was able to play solid in limited action. With a cheap cap hit of $850,000, the Canucks can afford to keep him around and use him as a mentor for not only Hughes but other members of the team as well.
Essentially, the reason Luke Schenn wasn’t dealt at the deadline was because at just $850,000 per for this season and next, the value the Canucks are getting from Schenn simply couldn’t be matched on the trade market.
Uncategorized
Recent articles from Colton Davies