After a wild night in Detroit, Conor Garland seems well on his way to becoming the Canucks’ next high scoring pest 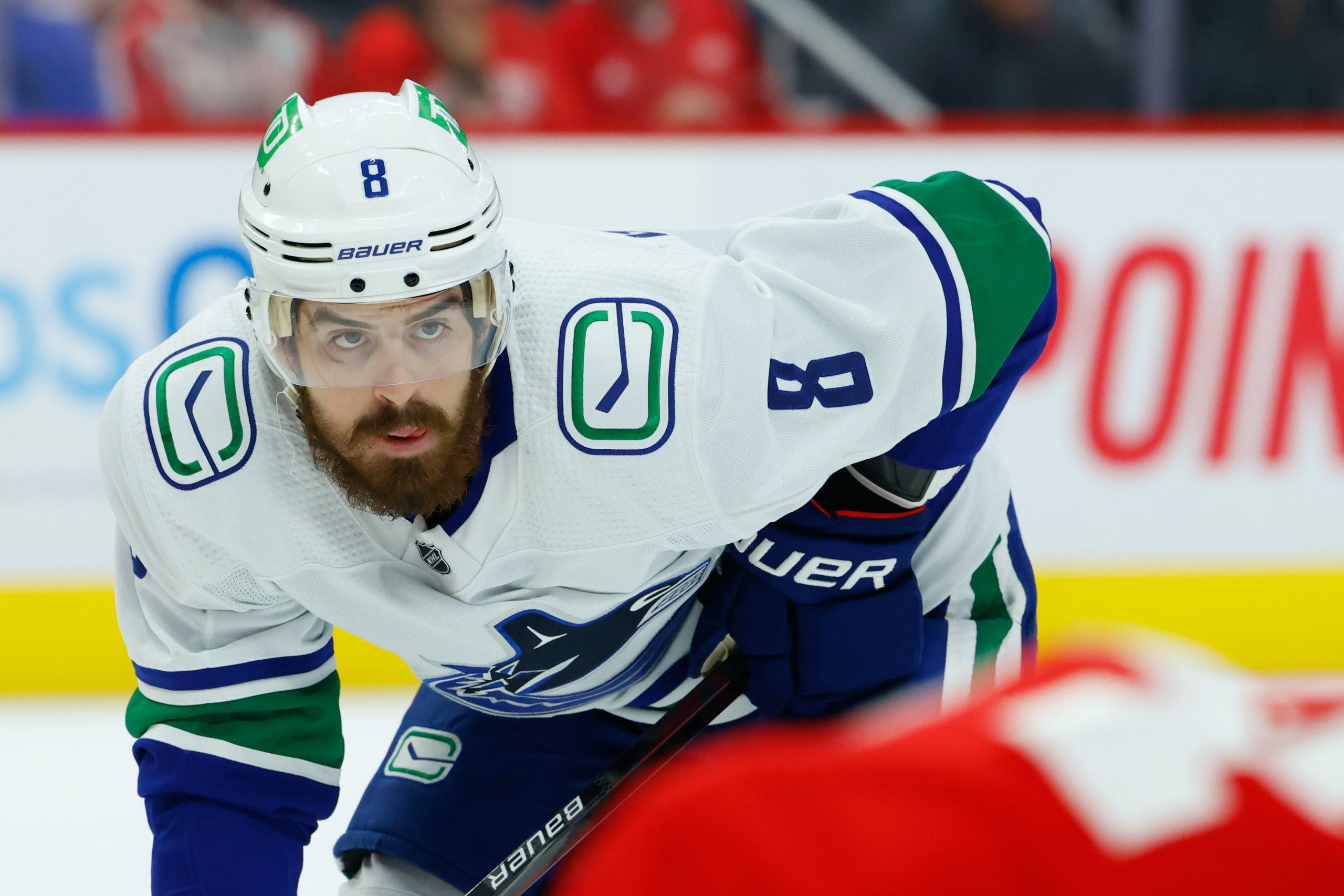 By Lachlan Irvine
1 year ago
It’s only taken three games, but Conor Garland is already a popular man among the masses in Canucks Nation.
Through the first week of Vancouver’s season, Garland has been an integral part of Travis Green’s offence, playing the fourth-most minutes among Canuck forwards and picking up three points in the process. But fans have been just as drawn to his physical, high-energy style of play as they have his scoring prowess.
It’s also taken just as little time for opposing players to voice their displeasure with the five-foot-ten winger’s aggressive tactics; be it Travis Konecny’s “angry little elf” comment during Friday’s game in Philadelphia or Filip Zadina’s much less funny choice of words on Saturday.
What both players underlined with their respective outbursts is a type of frustration that hasn’t been seen from a Canucks opponent in a very long time. Sure, Vancouver’s had quite a few enforcers and pests in recent years. But not since the days of Alex Burrows has Vancouver had a player that’s able to routinely get under the skin of opponents through agitation and offensive talent.
And right now, Garland looks like he might fit that bill.
Bo Horvat recognized the impact Garland brought against Detroit on Saturday to the player he faced many times playing against the Arizona Coyotes. “He was physical, he was getting under people’s skin obviously, and he was making plays,” Horvat said.
“That’s the Garland that you hated playing against when he was on Arizona, and thankfully he’s on our team now.”
Just take Saturday’s tilt versus the Red Wings. In a game where the Canucks struggled to find high danger scoring chances during the early stages, Garland made his count with a smart, sharp angle shot off Thomas Greiss’ mask to tie the game.
Garland’s second period goal ended up as the only Canucks tally in an eventual 3-1 loss, but it was his third period that became the story of the night. First was a questionable offside call where he followed through on the scoring chance, instantly setting off Robby Fabbri.
Then came the hit on Filip Zadina.
As Zadina reached out for a loose puck near the corner, Garland stepped between the Wings forward and the puck, catching Zadina in the head with his shoulder. A questionable play certainly, but one where the younger forward put himself in a bad position and ended up running into Garland’s backside.
“I kind of hit the brakes trying to create space,” Garland said post-game. “I know there’s a guy behind me, and he just skated into my back.”
The initial five minute penalty was downgraded to a two minute minor after review, which further angered an already upset Detroit bench. For the remainder of the night, the Wings put a larger focus on trying to throw Garland off through late-game slashes and high sticks.
Garland’s brand of hockey not only constantly draws the ire of opponents, but also comes with the highly sought-after ability to bring an energy boost to his teammates whenever he steps on the ice. According to Natural Stat Trick the Canucks out-chanced Detroit 9-1 at even strength with him on the ice, the largest such differential of any Canuck forward.
In Garland’s mind, the scoring chances he creates are what make him a regular target for opposing teams rather than the chippier side of his game. “I don’t think it’s penalties from being a pest or anything, it’s penalties from having the puck on your stick and being hard to defend,” Garland said.
Whatever the reason is, Conor Garland brings a type of talent to the Canucks’ lineup that they’ve lacked for quite a few years. His combination of speed, skill and aggressive play has already made him a standout in Vancouver’s top six, and the kind of hardworking pest — or elf — that Canucks fans will love just as much as his opponents will hate to face him.
Uncategorized
Recent articles from Lachlan Irvine