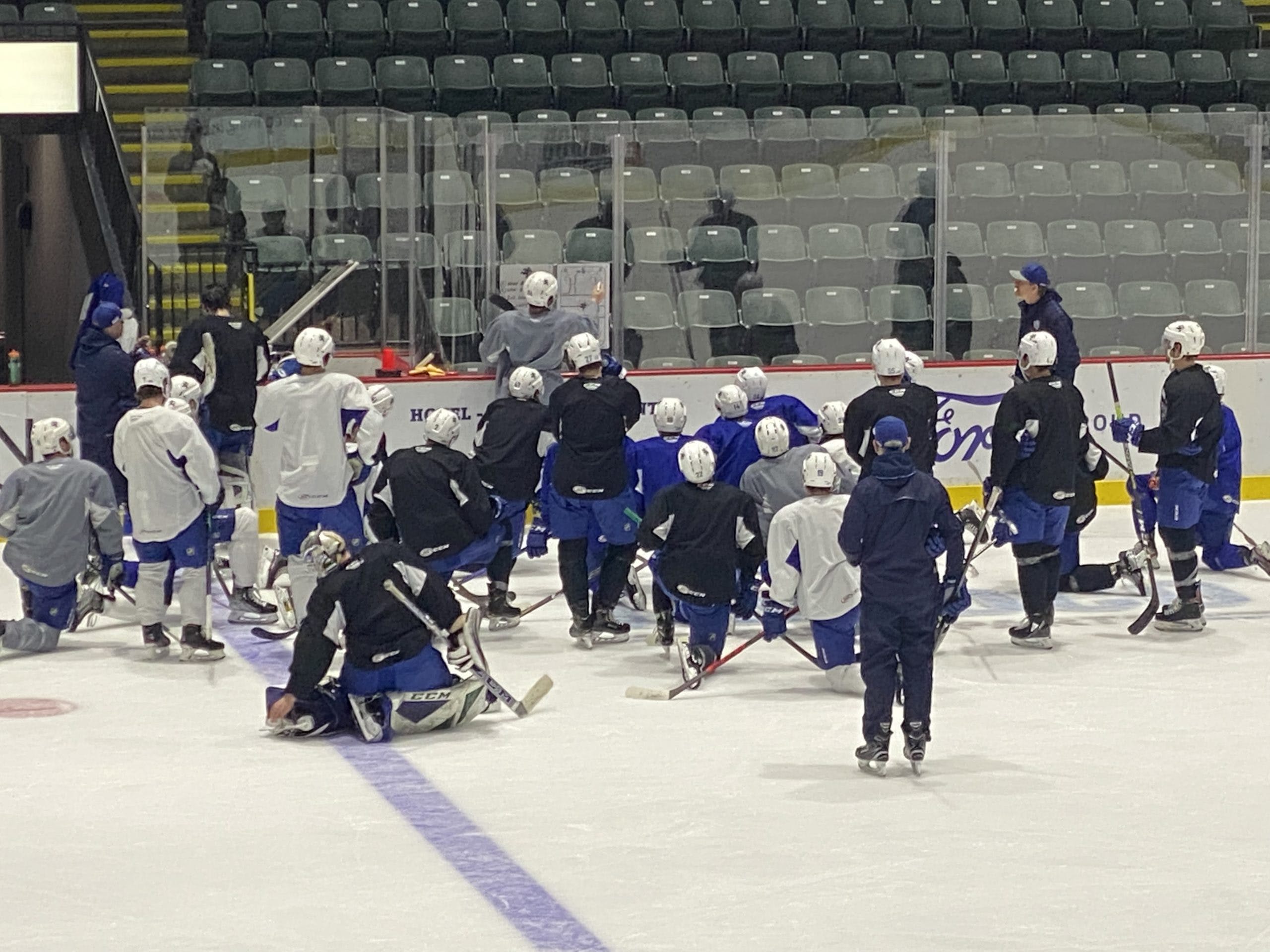 By Faber
1 year ago
Life in the AHL can be a rollercoaster ride. Some days you have 10 forwards at practice and some days your top pairing gets called up to the NHL.
That’s not the case this weekend for the Abbotsford Canucks as they are primed to have their strongest lineup of the season for a back-to-back in Tucson as they face the Roadrunners. They skated with 25 players and three goalies at Wednesday’s practice before leaving for Tucson on Thursday.
The lineup will be loaded with high-level AHL players like Phil Di Giuseppe, Justin Bailey, Jack Rathbone, Will Lockwood, and Mikey DiPietro.
“It’s exciting having our full group,” said Abbotsford Canucks head coach Trent Cull. “Believe it or not, it’s actually challenging because with 25 guys out there you go through ice pretty quick. We even had to flood the ice halfway through practice before we got back out there to work on special teams. But, honestly, it’s great to have a bunch of healthy bodies. It’s great to have options down here.”
Recent transactions to the Canucks have added Guillaume Brisebois, Justin Bailey and Jack Rathbone to the AHL lineup which will give them a big boost to the offence and left side of the defence. Brisebois has missed the opening part of the season but was all set to return to play last weekend before the Canucks’ games were postponed due to the recent flooding around Abbotsford.
“Breeze is just a steady, solid first pass guy who skates really well,” said Cull. “He can fill it in all situations when he’s up and running, but it’s been a while for Guillaume. So it’ll be nice to get him back in.”
As for Bailey, Cull knows that Bailey has skills that can translate to him being an everyday NHL player and he wants to do his job as a coach in a developmental league to get Bailey back in the NHL.
“Our main goal with Bails is just to see how we can help him get back in the NHL,” said Cull. “As for our team here in the AHL, he’s a great hockey player in all situations. He’s dynamic offensively, he showed that with the numbers he puts up when he’s here. As for the NHL though, we want to make sure he’s a big part of the penalty kill while also being a big part of our power play. We want to keep his legs fresh and just get him back on the ice a lot so that he is playing his game at five-on-five.”
Travis Hamonic also skated with the team on Wednesday, though he will not be travelling to Tucson to play with the Canucks. It is expected that Hamonic will join the Vancouver Canucks later on their road trip when they return to Canada.
The team had 10 defencemen in total at Wednesday’s practice, an antithetical shift from the beginning of the season when they kicked off a training camp with three defencemen.
21-year-old defenceman Jett Woo is confident in the group that will be skating together this weekend and believe that they have the right group of guys to make a strong push for the Calder Cup this season in the AHL.
“We have a strong team here, I said that right away,” said Woo. “We’re a team that wants to go for it all. That starts in practice but I’ve always said we have a strong team and hopefully build to that ultimate goal as the year goes on.”
Woo went on to say that the Canucks are expecting two wins this weekend against a Roadrunners team who sits in the bottom half of the AHL’s pacific division standings. “Any team that wants to go where we want to go has to have high expectations,” said Woo. “We’re excited for this weekend after a week off to work on a lot of things. Going hard for pucks is one thing I wanted to work on and getting pucks out and joining the rush. We did a lot of skill work this week and then a lot of skating work with Mackenzie Braid as well. So we had a few days off mixed in with some good hard days of work. We’re really looking forward to the weekend.”
The Abbotsford Canucks play the Tucson Roadrunners on Friday and Saturday with both games being 6 PM PST starts.
After Saturday’s game, the Canucks have two days off before we see the beginning of midweek games with the pacific leading Ontario Reign coming to town for games on Tuesday and Wednesday. It’s the beginning of the busy part of the AHL season as the Canucks play 12 games in the month of December.
We will keep you covered with updates on the Abbotsford Canucks here at CanucksArmy.
Uncategorized
Recent articles from Faber