Abbotsford Canucks after 20 games: 3 Negatives from the season so far 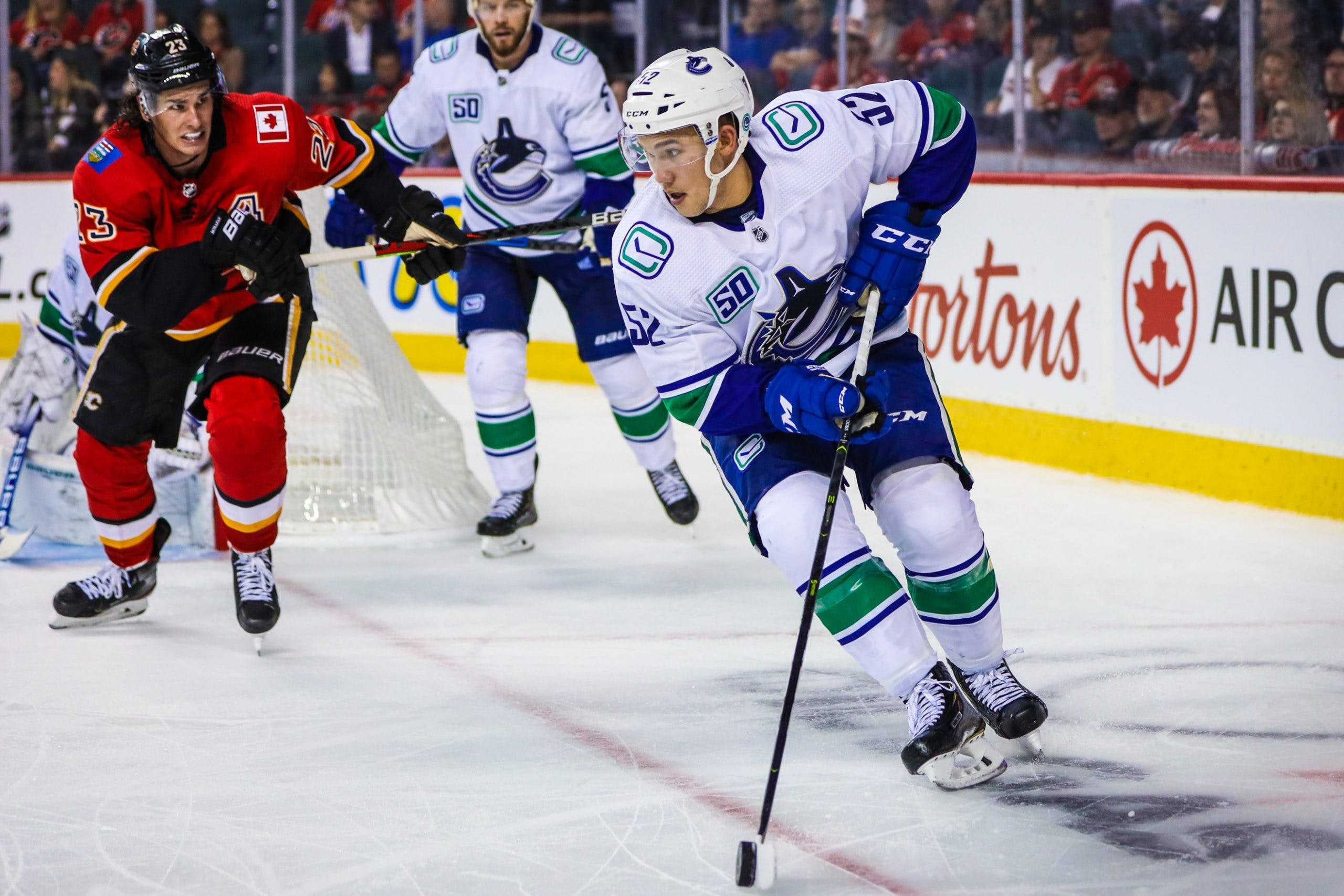 It’s been a tough start to the season for Carson Focht after putting up a respectable 12 points in 28 games during his first professional season in 2020-21. Focht is one of the organization’s only centre prospects but his play has me looking at Chase Wouters as more of an NHL prospect after what we have seen this year.
The Canucks have a positive control of the goal share after 20 games but Focht is severely in the negative in the 15 games he has played in this season. As per AHLNucksHarvest’s tracking, at five-on-five, Focht has been on the ice for two goals while the opposition has scored 11 goals against. Focht is quickly becoming a winger as well, first-year pro Tristen Nielsen is getting more of an opportunity at centre than Focht, who was a 5th round pick in 2019.
Focht showed like he may have some promise in his rookie season but he may be a good example of how last year’s AHL was watered down. He is attempting way fewer shots than he was last season as he was beginning to show well in the second half of last season. Focht was averaging 1.93 shots a game last year and is now down to just 0.81 through 16 games. 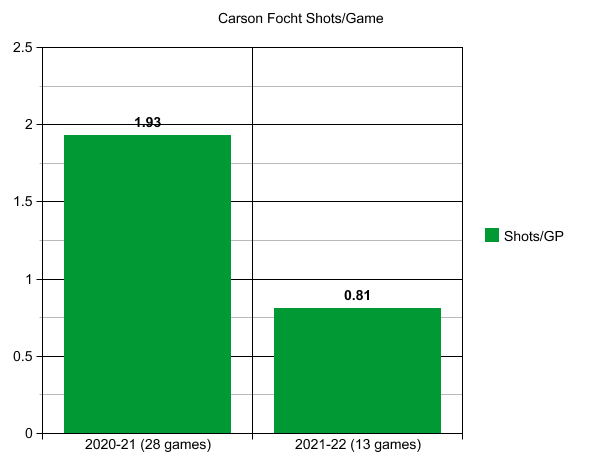 There is hope that Focht can find some more offence as the season goes on. His team’s on ice-shooting percentage with him on the ice is under two percent and that is sure to rise before the end of the year. Focht did begin the season getting power play time and skating alongside Danila Klimovich. I notice that Focht and Klimovich spend a lot of time together on the ice at practice and in pregame warm-ups.
Let’s hope that Focht can figure it out and be more of an impact player for the remainder of the season.

We were told that DiPietro would get 50 starts, that is not the case

We were expecting to see a healthy dose of Mikey DiPietro this season in the AHL. Discussions were had around if he could start back-to-back nights on weeks where the team only played on a Friday and Saturday or if he was going to be a lock for two starts when the team played on a Friday and Sunday.
That has been far from the case in Abbotsford. DiPietro started 10 of the first 20 games this season and it seems like Spencer Martin has played himself into the starter’s role after some hot play from the 26-year-old goalie. DiPietro is 22 years old and this past summer, many believe that Jaroslav Halak’s one-year deal meant that DiPietro was going to take over as the Vancouver Canucks’ backup for the 2022-23 season.
DiPietro has not been great this season. He sports a sub .900 save percentage and has a goals-against-average of 3.24. He has the highest GAA on the team and the lowest save percentage. I believe that a lot of that comes from some tough defensive play in front of him but a lot of those goals are also on DiPietro.
DiPietro has made some highlight-reel saves this season and he looks to have impressive feet when moving in the crease. The worry comes from his glove side saves and shots going under his arm on his blocker side. His known weakness in the past was low shots against and he has improved that. Now, it’s more about two areas where he is leaking goals.
The athleticism is clearly there as he makes some wonderful saves that get the Abbotsford Centre to their feet.
The worry is the bad goals against. We will see if he can clean up some technical things with Curtis Sanford and make a push to become the starter taking up a ton of the remaining starts for the season.

Two of the young players who have looked good for the Abbotsford Canucks this season are a pair of 21-year-olds in right-shot defenceman Jett Woo and right-shot centre Chase Wouters.
Woo came into his sophomore season looking like a much better puck possessor. He looked like he was receiving and handling passes with much more grace and he continues to play his physical brand of hockey that he set the bar for last season. The most noticeable improvement in his game this season has been his gap control in the defensive zone. He was doing a much better job of using angles while defending and was rarely beat in the corners due to his ability to take away space.
As for Wouters, he is looking like an excellent find by the Canucks’ scouting staff. Wouters looks great in the faceoff dot, he is trusted as one of the team’s best penalty-killing centres and has seen his role grow as the season goes along.
Both of these 21-year-olds were beginning to play more minutes and get a lot of penalty killing time when injury struck. Woo has been out of game-action for a week now and Wouters has not played since December 4th.
The two players were quickly becoming some of the Canucks’ best defensively sound players and their injuries will provide a (hopefully) minor setback as they look to grow in the AHL as 21-year-olds. Abbotsford is tough to get information out of unless you are in the arena and able to ask the coach questions, so, I’ll be in the rink next week as they return to Abbotsford for practice to see how long both Wouters and Woo will be out for.
Well, this wraps up the two-part series looking at the first 20 games of the season of the Abbotsford Canucks. There is sure to be more news and notes as they move along on their 68-game season and we will likely do another check-in after 40 games while reporting on some of the bigger stories down on the farm as the season progresses.
Stay tuned here at CanucksArmy for all the latest news on the Canucks’ minor league team.
Uncategorized
Recent articles from Faber