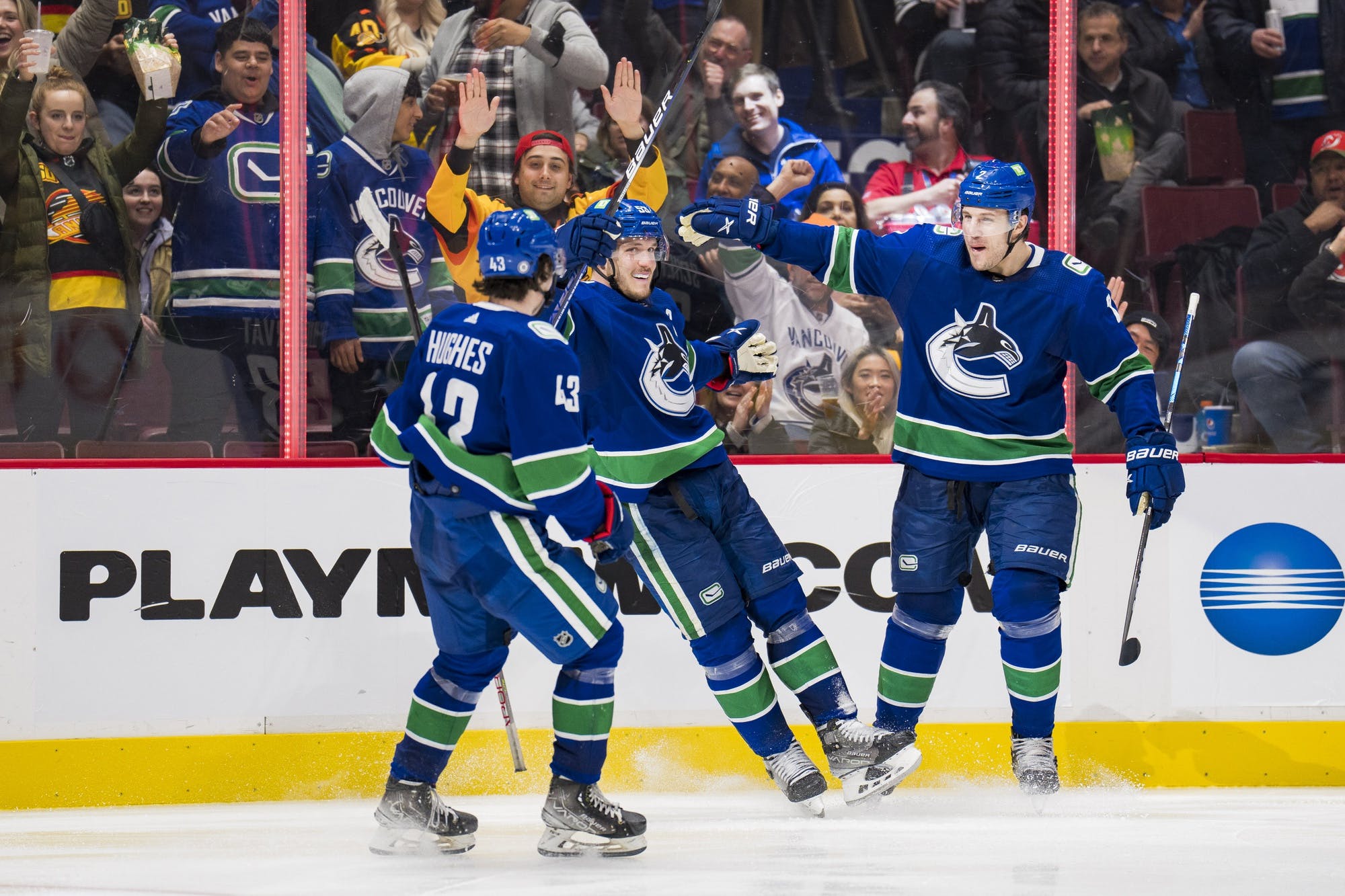 By Lachlan Irvine
4 months ago
The 2021-22 Vancouver Canucks were a roller coaster of drama and emotion. Coaches were fired, full management teams were replaced, trade rumours swirled, and they almost capped it off with one of the greatest single-season turnarounds in NHL history.
In a lot of ways, a quiet calming season might be just what Canucks fans could use after last year’s hyperactive marathon. But when was the last time Vancouver had a season like that?
The 2022-23 Canucks are shaping up to be just as crazy and fascinating as last year’s group, albeit with much less intrigue about the general manager situation. But this time around, there are a lot more positive, fun storylines to get people hyped for training camp in September.
Today we’ll highlight seven of them, ranging from player talent to coaching to postseason aspirations.

The Canucks turnaround under Bruce Boudreau was one for the ages. Now the head coach gets a full training camp and preseason to institute his game plans.
In the transition from Travis Green to Boudreau, the Canucks went from a team sitting back offensively to compensate for their lack of strong defence to a team saying, “who cares, let’s score big or go home”. And this year with a much deeper offensive group to work with, Boudreau and his coaching staff should be able to take big steps toward improving the power play and playing a more up-tempo game.

2. Another year of Thatcher Demko

With all due respect to J.T. Miller’s 99-point season and the Bruce Effect, Thatcher Demko was the Canucks’ most valuable player in 2022-23. Without his superhuman efforts and monstrous workload down the stretch, the Canucks couldn’t have made the comeback they did in the second half of the season.
At 26, Demko hasn’t even reached his peak ability yet and could easily improve on his .915 save percentage next season. If Spencer Martin can help bring down Demko’s number of starts from 61 to a more respectable number it’ll preserve their starter’s energy across the board, including for any playoff games.

3. All the new faces

Despite all the Canucks’ salary cap woes, new GM Patrik Allvin was still able to add quite a few names to the mix in free agency. While none of them come with the guarantee of success, they all represent different kinds of low-risk, high-reward bets.
Andrei Kuzmenko comes to Vancouver on a one-year deal after finishing second in KHL scoring. Fellow Russian Ilya Mikheyev arrives on a four-year deal with the hope of elevating his skills in a bigger role with the Canucks than he could earn in Toronto. Curtis Lazar fits the Canucks needs in the bottom six perfectly, and fringe pieces like Dakota Joshua and Wyatt Kalynuk could bear fruit in the right situation.

What’s that? I need to be more specific cause there are two of them now? Alright, fine.
The senior Pettersson started 2021-22 ice cold after contracts talks dragged out into the preseason. But in the second half of the season, he caught fire, scoring 51 points across the Canucks’ final 44 games.
This season the 23-year-old Pettersson is entering with no distractions or nagging injuries to worry about and will get the benefit of a lot more offensive weapons around him to open up the attacking zone. Not that Pettersson needs it when he’s playing at his best. Right now, it sure feels like the sky’s the limit for Pettersson in 2022-23.

5. The mystery of the opening night roster

We’ve already talked about the Canucks’ newcomers added in free agency. But there’s a real possibility that Allvin & Co. may not be done.
While the forward corps has seen a lot of upgrades, Vancouver is prepared to run back the same defence that ended last season. A full season of Travis Dermott is worth getting exciting about, but they need more help and might make a trade from a point of strength to shore the right side defence up.
Trade options for pending UFA J.T. Miller have been discussed to death, but names like Oliver Ekman-Larsson, Tyler Myers, Conor Garland and Tanner Pearson have also come up this offseason. So depending on how the last free agent dominoes fall, Jim Rutherford and Allvin might still have one last trick up their sleeve before training camp opens in September.

6. Quinn Hughes is only getting better

There’s only one part of the Canucks defence that warrants no questions or concerns. No, it isn’t Luke Schenn, but he’s a close second.
In just his third full season, Quinn Hughes took a 34-year-old record for points by a Vancouver defender and smashed it with a 68-point campaign. Hughes was one of the few constants that kept the Canucks competitive early in the season and vaulted them to wins in the latter portions.
There’s still plenty of work required on the blue line around him, including finding Hughes a proper long-term partner on the first pairing. But at just 22, we’re only seeing the beginning of Quinn Hughes’ dominance. The best is certainly yet to come.

7. The Canucks could possibly – maybe – make the playoffs

The Pacific Division isn’t as weak as last season’s edition. The Oilers still have Connor McDavid and Leon Draisaitl, the youthful Kings are another year older, and the Flames have replaced Johnny Gaudreau and Matthew Tkachuk with a game-changing addition in Jonathan Huberdeau.
And yet, the door is still very much open for the Canucks in the Pacific.
Last season Vancouver nearly turned a dismal 8-15-2 record in December and a shorthanded roster into a Western wild card spot. With a little more runway it’s possible that they would’ve broken through. Now they get to start the race over again with the same clean sheet as everyone else.
The Canucks have made their own upgrades and additions that could help vault them past shallower rosters like Edmonton and Calgary, but will still have to contend with several teams who’ve improved over the summer like Vegas and the Kings. But if the same Vancouver team that played their last 57 games shows up and improves, Canucks fans could finally be in the building to celebrate a playoff berth for the first time since 2015.