7 cheap, low-risk forwards the Vancouver Canucks should target this summer By Bill Huan
1 year ago
Welcome back to another edition of Exploiting the Expa—oh wait, that’s Stephan Roget’s line, not mine.
In my defence, Stephan has been listing so many players for the Canucks to target that I’ve started to think like him. With that said, we’re not going to worry about the Expansion Draft and focus instead on any cheap, low-risk forwards who could provide Vancouver with surplus value if they exceed expectations.
It’s a similar mindset to what the team tried to accomplish last year when signing Jayce Hawryluk. His contract was cheap enough that it could be fully buried in the minors but the potential was there for him to be a real contributing piece for the Canucks’ bottom-six. We’ll be looking at players in different situations: RFAs, UFAs, and a few who are still signed beyond this season with their current teams.
*All stats reflect five on five numbers (except for points and TOI) from the 2020-21 season.

An undrafted player, Hunt has appeared in only 89 games in his career and chipped in an unremarkable 23 points. His production this season doesn’t stand out either, but there are signs that suggest he could be a useful depth player if given more ice time. The Coyotes have been outscored 8-13 at five on five with Hunt playing but his high expected goals percentage suggests that there’s some room for positive regression. The problem is that Hunt isn’t a very good finisher so it’s unlikely his actual goals percentage matches the expected figures, but a 13% discrepancy is still too large to be sustainable.
Even if his finishing doesn’t improve, Hunt’s most attractive attribute is his defensive play. The 25-year-old has been a responsible forward for his entire career, as his teams have conceded fewer scoring chances against in every one of his seasons. 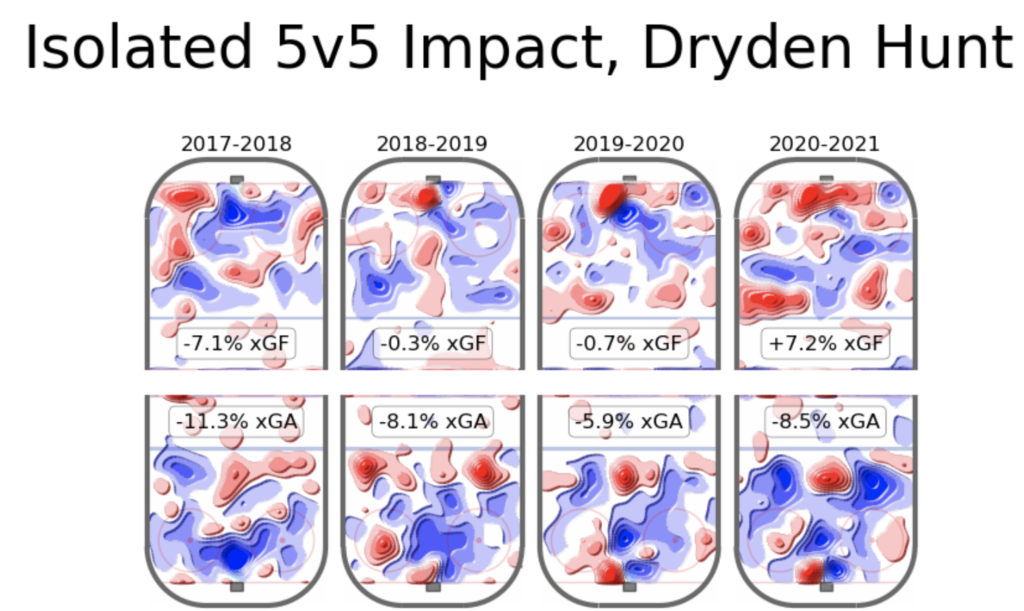 At the very least, Hunt has the potential to make a positive defensive impact for the Canucks’ bottom-six if he joins the team. That alone is intriguing because it might alleviate some of Bo Horvat’s huge two-way burden. If the winger can improve on his finishing, then he could prove to be a home run addition for Vancouver.

The name alone should make every fan want him on their team. Just imagine the puns that could be made using both “Rudolfs” AND “Balcers!” Name aside, the 24-year-old might have the highest potential among players on this list. That means he’ll be tougher to acquire, but the Canucks shouldn’t be scared off given San Jose’s lack of assets.
Balcers’ numbers might not be as impressive as some others in the article, but that’s because he played tougher minutes than most as well. He was deployed in the Sharks’ top six for most of the season and performed admirably given his inexperience and the strong competition that he faced. 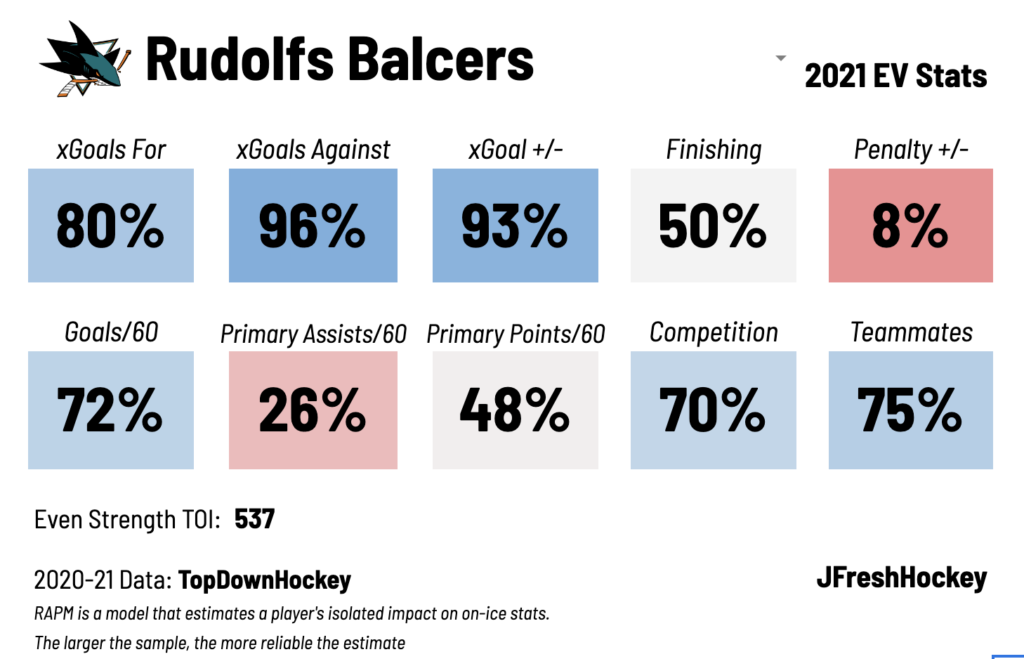 If the Canucks somehow pried Balcers out of San Jose, he has a chance to play some second-line minutes alongside Horvat instead of just being banished to the team’s bottom-six. His most common linemates this season were Timo Meier and Tomas Hertl and that trio had a 59.45% corsi and 65.31% expected goals percentage in 157 minutes together at five on five. It’s worth noting that Meier and Hertl were still break even in both stats without Balcers, but there’s no doubt that he’s still a good supporting player who raised their ceiling.
If Balcers could do the same with Horvat, that could potentially allow the Canucks to move either Nils Höglander or Tanner Pearson to the third line, giving the team some semblance of depth.

Bunting’s an interesting case because he’s only 25 and will already be a UFA in the offseason. He’s categorized as a Group 6 UFA, which is a player who is at least 25 years old and has played in three or more professional seasons but appeared in fewer than 80 total NHL games. Bunting isn’t even close to hitting that last requirement since he’s only suited up in 26 NHL matches in his career, but his flashes of potential make him an intriguing free-agent target.
His goal total undoubtedly stands out but that’s been boosted by an unsustainable 23% shooting mark. However, his underlying metrics suggest that it isn’t all a smokescreen, as the Coyotes have controlled play quite well with Bunting playing at five on five. He even led the Coyotes in Wins Above Replacement (WAR), a metric that estimates the number of wins a player contributed to their respective team. 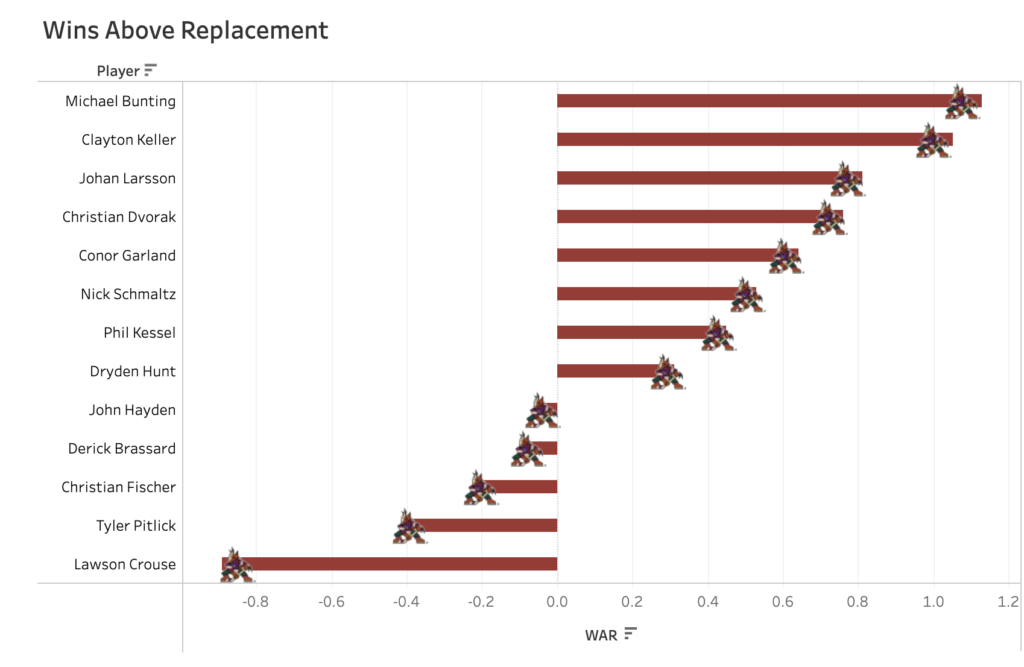 Of course, a lot of that was due to his hot shooting and overinflated goal total, but Bunting was also a positive defensive player according to the same metric.
It’ll be great if the Canucks were able to sign Bunting to a cheap short-term deal, but the risk is that teams will get into a small bidding war for a young UFA who showed potential in a tiny sample size. It might be worth considering if he’s willing to accept a contract just over $1 million — so that it could be buried in the AHL — but anything more than that would be too much.

A centre who scored at a higher five on five rate than Leon Draisaitl? Sign me up! Of course, that came in a very small sample size and his offensive game has historically been MIA, but Gaudreau’s an interesting option for the Canucks if he’s willing to sign for less than $1 million.
In that hypothetical, Gaudreau might be a better fourth line option than Jay Beagle and provide more value to the team on a per-dollar basis than Brandon Sutter too, who’ll likely command upwards of $1.5 million at least. Again, if it doesn’t work out, he could be buried in the minors, but he’s definitely worth a look considering the strong numbers he put up this season. 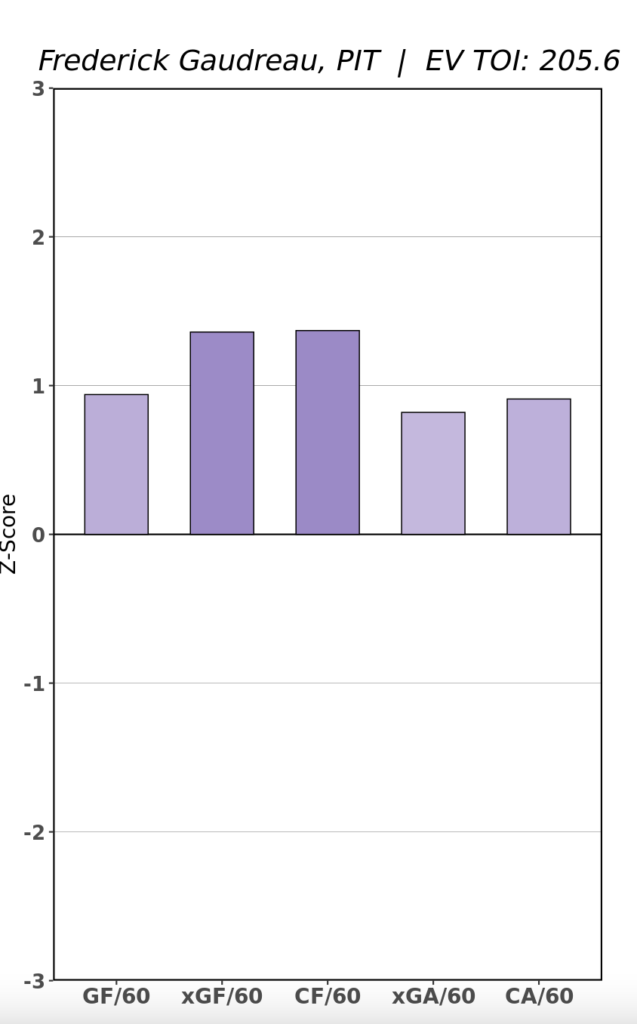 Gaudreau shouldn’t be banked on to provide any offence, but he should be a better defensive option than Beagle and Sutter while potentially being on a cheaper deal too.

Signed beyond this season

Similar to Gaudreau and Bunting, O’Connor appeared in very few games this season and put up deceiving stats with the league’s best team, so everything should be taken with a grain of salt. However, as previously mentioned, there really isn’t a downside to acquiring him since his contract could be buried in the minors and he does have more upside than most of the Canucks’ other bottom-six forwards.
Unsurprisingly, O’Connor played very sheltered minutes but his isolated metrics are still intriguing. 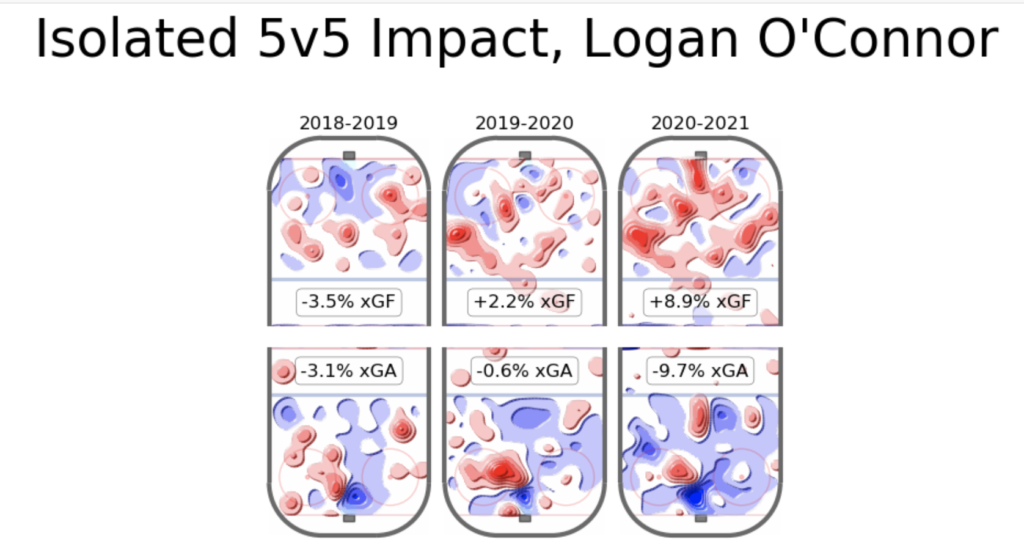 The other interesting aspect of O’Connor’s game is his ability to kill penalties. 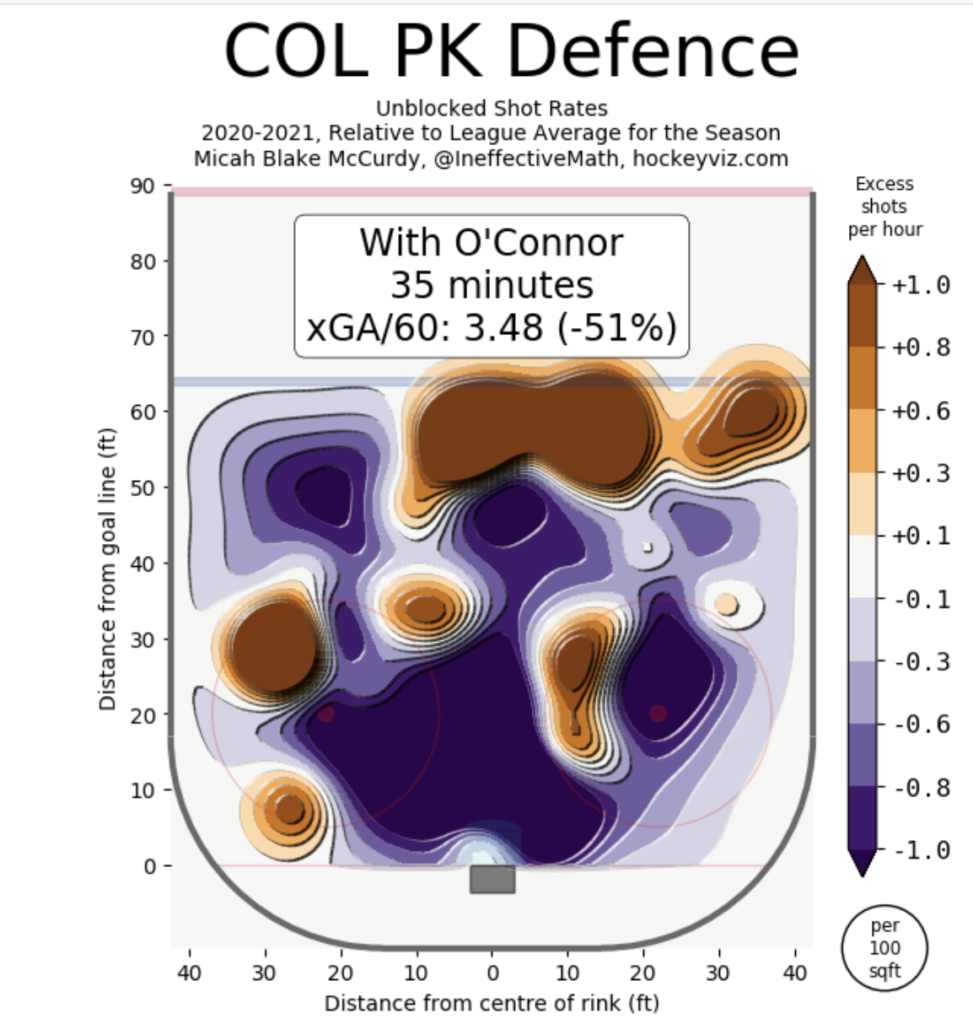 Obviously, he’ll be a much better fit if he played centre, but O’Connor’s speed and defensive awareness will still be valued on a Canucks team that employs a slow bottom-six group filled with liabilities. His relative youth also suggests that he may still have some untapped upside, although expectations shouldn’t be too high in that regard.

With the way the season has gone in Columbus, I’m surprised that Robinson didn’t see more ice time. Perhaps the team soured on him for some reason, which would give the Canucks an interesting player to target in a trade. Robinson played mostly on the fourth line and didn’t see any power-play time but still scored at a credible middle-six rate. More importantly, he did it over an entire season, which suggests that this type of production could be sustainable.
If we use WAR again, we can see that Robinson was one of Columbus’ more valuable players, and it wasn’t inflated by hot shooting, either. 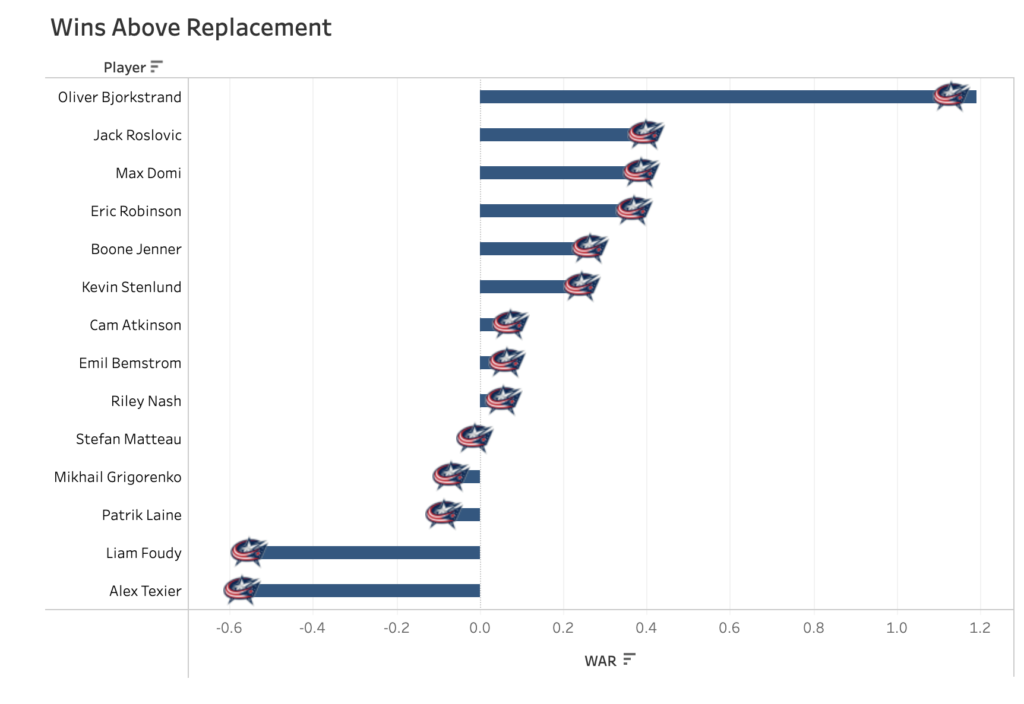 When given the right opportunity, Robinson has the potential to make an impact akin to Josh Leivo’s a few seasons ago: a reliable two-way forward who could slide up and down the lineup due to their versatility at both ends of the ice. Given his cheap contract and RFA status, the Canucks will also have leverage when he needs a new deal next season if the team’s able to acquire him.

Another defensive specialist, Trenin won’t solve the Canucks’ bottom-six scoring woes but his presence will at least make sure that the team doesn’t get caved in by shots either. The 24-year-old has mainly played left winger in his career but is able to slide into the middle in a pinch. Surprisingly, he only logged six minutes of shorthanded time with Nashville this season so the jury’s still out on his penalty-killing abilities. Nonetheless, he’s a decent play driver and should help Vancouver stay afloat defensively against depth players. 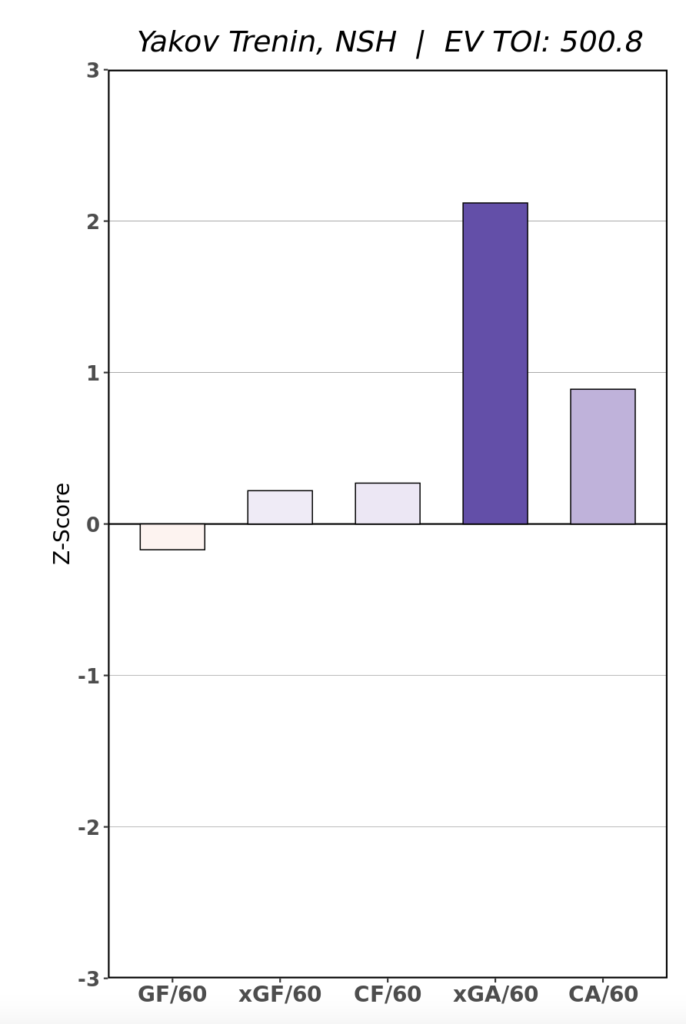 It’s also worth pointing out that he played in Nashville, which is where offence goes to die. Every one of their forwards seems to experience a dropoff in production, which is bizarre considering their defencemen seem to score fine. Maybe it has something to do with their love for country music, but it isn’t out of the question for Trenin’s offensive game to reach new heights in the right environment. Hopefully, that won’t come at the cost of his defensive prowess, but Trenin is still a worthwhile player to target given his age and cheap contract.
Stats courtesy of HockeyViz, Evolving-Hockey, JFresh, TopDownHockey, and Natural Stat Trick.
Uncategorized
Recent articles from Bill Huan