6 teams and the big returns they could offer the Canucks in a J.T. Miller trade 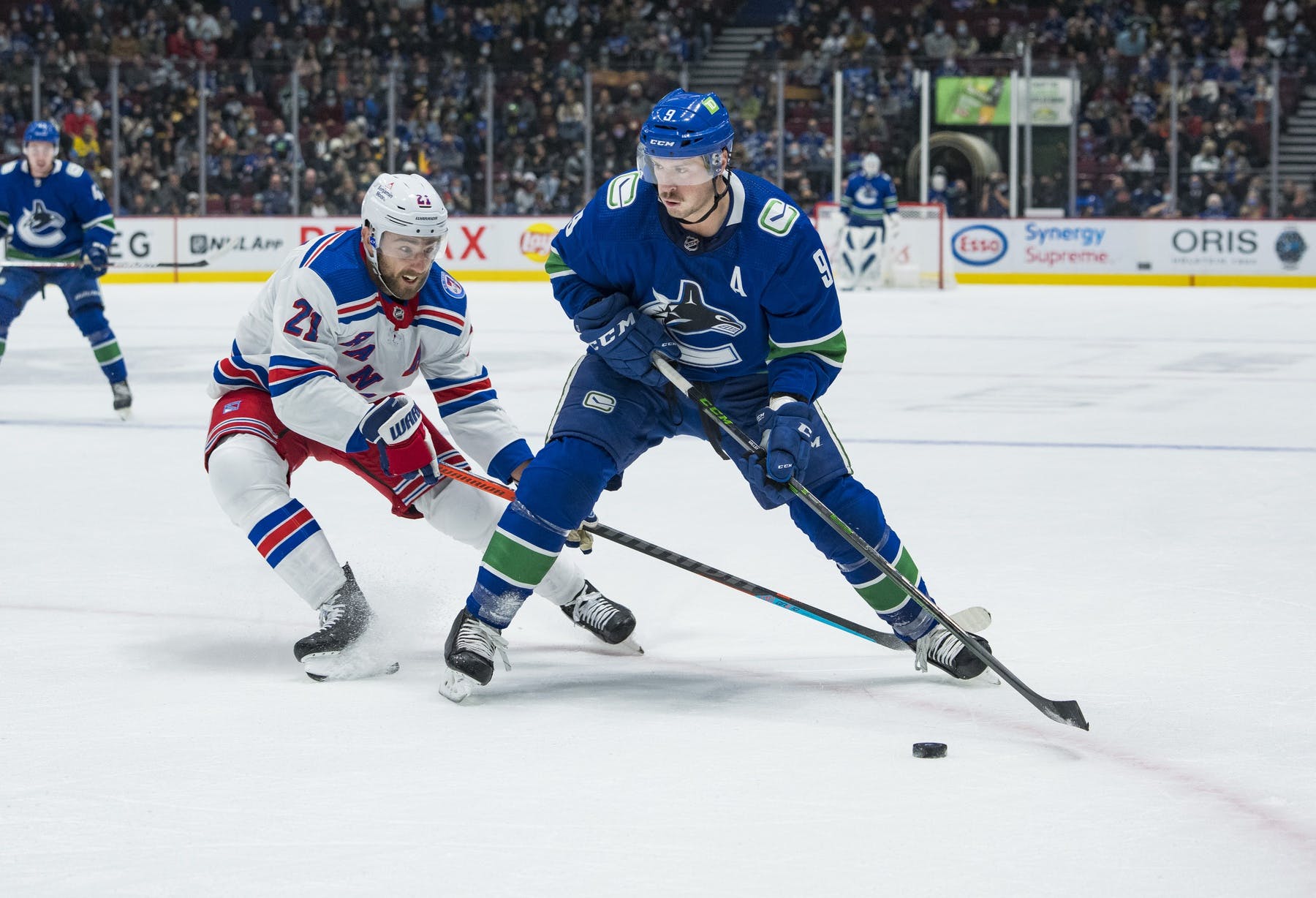 By Stephan Roget
1 year ago
For the time being, at least, it seems that change may not be coming to the Vancouver Canucks. Not in terms of coaching or management-related firings, anyway. As Sportsnet’s Satiar Shah has suggested, a big, room-shaking trade may still be on the table, and this author is one of many who have suggested that J.T. Miller is the perfect candidate for such a trade.
But this deep into the 2021/22 regular season, picking targets for a potential Miller transaction is a little difficult. With his $5.25 million AAV and year-and-three-quarters remaining on his contract, Miller would have to go to a team that is both firmly within a window of contention — or thinks they will be soon — and has the cap space to accommodate him.
Any would-be trade partner would also have to have assets on hand that the Canucks might be interested in; namely, right-handed defenders, quality penalty killers, and affordable talent.
That’s not a very big list, but it is a list, and that list is below, along with the potential pieces of interest each team could offer up in return to make it worth the Canucks’ while.

Pieces of Interest: Justin Barron, Drew Helleson, 2022 2nd Round Pick, Tyson Jost, JT Compher
Why They Would Be Interested: Colorado is a bit of a perfect storm when it comes to a fit for Miller. They’re supposed to be contenders, but they’re languishing down in 5th place in the Central Division; in part due to injuries, but also in part due to a noticeable hole in their top-six. Miller slots in either as their 2C, bumping Kadri down to 3C, or on someone’s wing.
Why They Wouldn’t: The only real sticking point for the Avs is cap space, as they’re currently at the ceiling even with multiple players on the IR. The Canucks would have to take salary back, but most of that salary could be covered by another JT, as in Compher, who also happens to be a right-handed penalty killer.
What’s a Realistic Offer?: Any offer from the Avalanche probably has to start with Justin Barron, the sizeable 20-year-old RHD in his rookie pro season. Barron is a slightly-less-than-bluechip two-way prospect. Drew Helleson is interesting, but only as a sweetener, and the Avs don’t have a first round pick to offer. Any salary coming back should be in the form of a veteran PKer, either the aforementioned Compher or Tyson Jost.
Let’s say: Justin Barron, JT Compher, the 2022 2nd Round Pick, and another future pick.

Pieces of Interest: Adam Boqvist, Cole Sillinger, Corson Ceulemans, 2022 1st Round Pick, Chicago’s 2022 1st Round Pick
Why They Would Be Interested: The Blue Jackets aren’t exactly contenders, but they are competitive in the Metropolitan right now, and they’ve yet to commit to a full rebuild. They do not have anyone on their roster approaching the qualifications of a number one center, and they’re pretty short on top-six wing talent, too. They have the fourth-most cap space in the league and, best of all, Miller is an Ohio local.
Why They Wouldn’t: Columbus doesn’t project to challenge for the Stanley Cup in the next two years, and by then Miller’s contract is up. They may choose to wait and pursue him as a UFA instead. However, if they believe they can sign him to an extension with a literal hometown discount, there’s no reason to wait.
What’s a Realistic Offer?: Adam Boqvist is the Jackets’ top young RHD, but he may not be the stylistic fit that the Canucks are looking for. Recent draft pick Corson Cuelemans could be, but then there’s a longer wait for him. Super-rookie Cole Sillinger is very intriguing, but probably untouchable. The Jackets do have two first round picks to offer, however.
Let’s go with: Corson Ceulemans, the lower of the two 2022 1st Round Picks, and an additional mid-tier sweetener.

Pieces of Interest: Calen Addison, Jordan Greenway, Matt Dumba, Filip Johansson, 2022 1st Round Pick
Why They Would Be Interested: The Wild are second in the Central Division and shaping up to be a semi-surprising contender this year, but they’ve still got an obvious talent-gap at the center position. They could very easily convince themselves that Miller is the 1C they’ve long been seeking, and they wouldn’t have to move much salary to accommodate him. They’ve also got an abundance of moveable pieces to offer up in return.
Why They Wouldn’t: If Minnesota isn’t totally convinced that Miller is a long-term center option, they probably won’t trade for him. They’re loaded up enough on the wings. For the Wild, it’s pivot or bust.
What’s a Realistic Offer?: The idea of trading Miller for a package including Matt Dumba is intriguing, but only serves to further complicate the Canucks’ cap issues. Calen Addison and Filip Johansson are fine RHD prospects, but nothing exceptional. Jordan Greenway is the sort of power winger that any franchise could use, but his pending RFA raise is concerning and he’s having a tough year.
Let’s call it: Calen Addison, Jordan Greenway, and the 2022 1st Round Pick (with the Canucks throwing in a sweetener of their own).

Pieces of Interest: Dante Fabbro, Philippe Myers, Eeli Tolvanen, Luke Prokop, 2022 1st Round Pick
Why They Would Be Interested: Nashville never really knows what to do with itself. This offseason, they traded some high-priced veterans and extended others. It’s clear that they’re not doing a full tear-down, and they are competitive in the Central Division, so they could be looking to add. Right now, they’re lacking in offensive talent and reliable centers. They could believe that Miller brings both to the table, and target him. They’ve got the sixth-most cap space in the NHL.
Why They Wouldn’t: The Predators are already paying Matt Duchene and Ryan Johansen a cumulative $16 million a year to not be good centers. They may be wary of another high-priced pseudo-center and hold out for something certain.
What’s a Realistic Offer?: Lower Mainland-born Dante Fabbro is the obvious target, but he may be too important to the future of the Predators’ blueline to part with. Philippe Myers is an older and lesser talent on the right-side, but he would also be an upgrade on what the Canucks have on tap. Luke Prokop is a hero to many and Nashville’s best RHD prospect, but he’s a few years off of NHL action. Eeli Tolvanen is an intriguing and cheap option with untapped potential to fill Miller’s offensive void.
Let’s suggest: Dante Fabbro STRAIGHT-UP or Philippe Myers and Eeli Tolvanen.

Pieces of Interest: Noah Dobson, Scott Mayfield, Aatu Raty, 2022 1st Round Pick,
Why They Would Be Interested: Leave it to Lou Lamoriello to be at the helm of a contending team with boatloads of cap space — or should we say a team that is supposed to be contending? The Islanders were touted as potential champions coming into 2021/22, but they’re down at the very bottom of the Metropolitan. Only the Arizona Coyotes have scored fewer goals this year than the Islanders. Unlike most of the teams on this list, New York has a greater need for Miller at wing than at center, and he would immediately slot in beside Mat Barzal on the top line. They have the space to add Miller right now if they can just move out a cool million. This is a slam dunk for them.
Why They Wouldn’t: Honestly, it’s hard to think of a reason that the Islanders wouldn’t pursue Miller. They may be hesitant to take away from their sturdy blueline, but they have the top-end talent and replacement depth to do it.
What’s a Realistic Offer?: The Canucks should zero in on two specific players here, Noah Dobson and Scott Mayfield. Both are top-four-quality RHDs today. Mayfield is signed for this season and the next at an absolute bargain, which makes him appealing but possibly only a short-term solution. The 21-year old Dobson is the preferred target, but will be tougher to pry away. Other future assets, like Aatu Raty or the Islanders’ first, are window-dressing.
Let’s demand: Noah Dobson and a late pick or Scott Mayfield and the 2022 1st Round Pick.

Pieces of Interest: Braden Schneider, Nils Lundkvist, Hunter Skinner, 2022 1st Round Pick
Why They Would Be Interested: The rebuild is complete and the future is now for the Rangers, as they duke it out in the ultra-competitive Metropolitan. If they’ve got a weakness, it’s in their top-six, where the 2C position and several of the wing slots are held by questionably reliable individuals. Miller would go a long way toward fixing that, and toward putting New York on par with Washington and Carolina. If the Rangers have a position of strength, it’s on the right-side of their blueline, which is mighty convenient. They also have almost enough cap space to take two Millers.
Why They Wouldn’t: The Rangers have been there and done that as far as JT Miller goes, and they were obviously fine to part with him back in the day. But a lot has changed since Miller left New York, including the coach, the management, and every player other than Mika Zibanejad, Chris Kreider, and Alexandar Georgiev. That’s basically a blank slate. The real reason they might not trade for him is because they’ve got multiple important contract extensions to hand out over the next two years.
What’s a Realistic Offer?: Braden Schneider is the ultimate get for the Canucks. He’s a 20-year-old big-bodied two-way stud with shutdown leanings, and he’s stuck behind Adam Fox, Jacob Trouba, and Nils Lundkvist. If Schneider is a non-starter, Lundkvist himself is a fine target…but the Canucks should REALLY dig in on Schneider. The Rangers have plenty of intriguing pieces, but the focus has to be on quality and fit here.
Let’s hope for: Braden Schneider STRAIGHT-UP or Nils Lundkvist and a 2022 2nd Round Pick.
Uncategorized
Recent articles from Stephan Roget