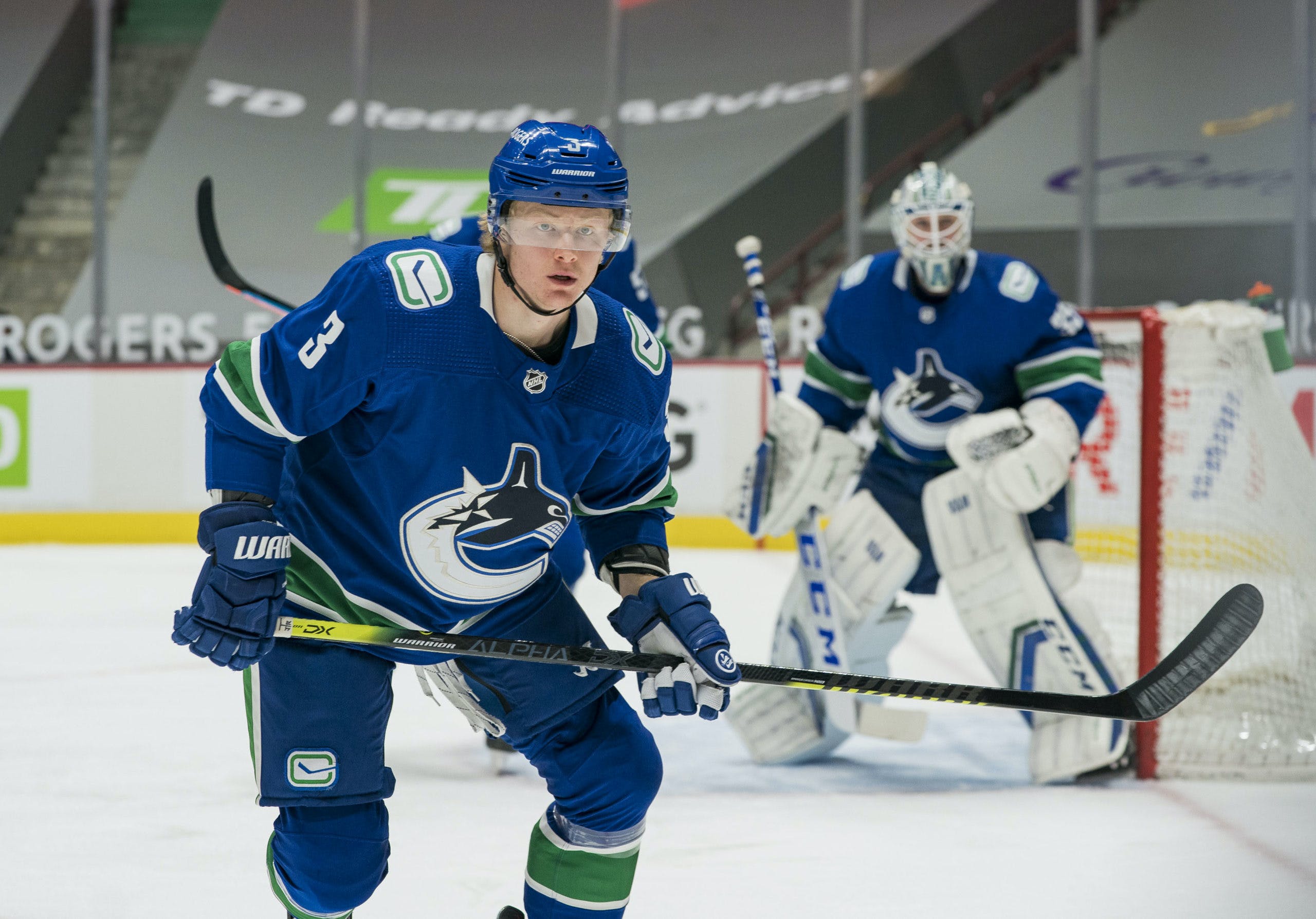 By Faber
1 year ago
Don’t let two wins against bottom-five teams in this league fool you. The Vancouver Canucks still need a boost to their lineup.
With their AHL team now just down the road in Abbotsford, they can make a quick call to get some fresh players that are hungry for ice time.
There has been some flash in the pan performances that have gotten Canucks fans excited about giving a call-up to certain players from Abbotsford. But through those flashes, there have been a few players who look like they could consistently make an impact at the NHL level.
I’ve narrowed it down to three players and talked with each of them about how they feel their game is trending towards getting a chance with the big club.

When it comes to energy and aggressiveness, there is nobody on the Abbotsford Canucks that gives it more than Will Lockwood.
Lockwood is playing on both special teams’ units and is fitting in on a very skilled AHL line that is rounded out by Nic Petan and Justin Bailey. The speed on that line shines in the AHL. Out of the three, Lockwood is the most willing to get his hands dirty in the corners and consistently forechecks like a bat out of hell.
Lockwood shows some fight and is the type of player who can match Tyler Motte’s energy on a fourth line. The difference between Lockwood’s pace and Alex Chiasson’s pace is like comparing a cheetah to a fish out of water. Even though Lockwood is smaller than Chiasson, I’d bet the house on Lockwood being more physical in a fourth-line role.
Lockwood has also been the top penalty-killing forward for Abbotsford since he came back from an early-season injury. He has been paired up with Chase Wouters and is almost always the first forward to take the ice for a penalty kill. He knows that penalty killing is going to be an important piece in getting him up to the NHL.
“I’m just continuing to work on my penalty killing down here,” said Lockwood. “I know that the PK will help me move up eventually, whenever that is. So, working on my penalty killing is a main focus of mine.”
Travis Green, other coaches, and Canucks management have made it very clear to Lockwood that they wanted him to work on becoming a confident penalty killer. He has become that in the AHL and all of his best skills look to be transferable to the NHL.
“Everyone in Vancouver was really transparent with what they want from me,” said Lockwood. “They told me what it’s going to take to get to that level and one of the things is the PK. It’s been one of my main focuses down here.”
It feels like he is playing his best hockey of the season over the past few weeks as well. Lockwood has scored three goals and added an assist over his last six games. He is creating a ton of turnovers on the forecheck and being physical on every shift.
When the Vancouver Canucks are ready for a jolt to the fourth line, Lockwood is the man for the job.

Another forward who is doing it all for the Abbotsford Canucks, Phil Di Giuseppe is killing penalties, playing the power play, is on Abbotsford’s top line, and scoring highlight-reel goals.
It came as a surprise that Di Giuseppe didn’t make the NHL roster out of training camp. He looked quick, made all the right plays, was on the penalty kill, and simply looked like he did enough to make the NHL squad out of camp.
Decisions were made and the 28-year-old found himself beginning the season in the AHL.
There are certain players that you watch in the AHL and think to yourself that they are too good for the league, and Di Giuseppe is one of them. But not in a way like Reid Boucher or Nikolay Goldobin. Di Giuseppe brings hustle on the forecheck, good puck-moving skills, and is rarely out of position in the defensive zone.
A lot of the success on his line begins with Di Giuseppe. He’s an excellent passer who doesn’t need time to think plays out. He’s got strong hockey instincts and knows where his teammates are and where they are going to be.
Di Giuseppe has eight points in his last six games. His confidence is sky-high and he is feeling great about where his game is at right now.
“Honestly, I wasn’t very happy with my game at the beginning of the year,” said Di Giuseppe. “ I just put my head down and tried to work it back to where I want it to be. I see it slowly getting to what I expected of myself. I still think there’s a lot more and I’m eager to see what the work and attention to detail do for my game.”
Full of confidence and playing the best he has all season, Di Giuseppe is a veteran with over 200 games of NHL experience. He should be given a look in the Canucks’ lineup.

Most of us know what Jack Rathbone is all about. He is a young offensive left-shot defenceman who can create plays but needs to round out his defensive game before he can truly become an NHL regular. Rathbone is also aware of what he needs to work on to become that everyday defenceman for Vancouver’s left side.
A stint in the AHL has given Rathbone plenty of ice time and the off-ice sessions with the coaching staff have helped him see some of his defensive deficiencies — because there’s not a lot to dislike about what he does offensively.
“We’ve done a lot of video work,” Rathbone told CanucksArmy. “That has been huge for me, and being able to play more minutes and playing a lot more with the puck on my stick has been good for me. I know that I can play at that level and right now it’s about doing what’s best for my development. Development is being done down here. I take every day down here as the time to work and get better.”
The Vancouver Canucks are currently playing Kyle Burroughs on the left side of their third pairing. It’s clear that this is a spot where the organization would like to have Rathbone playing. He believes that the AHL stint has given him a chance to get into a rhythm and the extra video sessions along with much more game action with the puck on his stick have him ready to be back in the NHL.
Rathbone has been playing big minutes with Abbotsford and has built up confidence that will help him whenever he gets back to the NHL.
“A lot of the confidence-building down here is about getting game reads,” said Rathbone. “You can do as much as you want in practice in terms of reps and drill after drill after drill but the second you get into live action, it’s different. It’s good to build that confidence and start to get into a rhythm here especially when we’re playing a lot of games.”
The Vancouver Canucks snuck out some wins against Montreal and Ottawa but the schedule gets much tougher and placing bets on Kyle Burroughs over Jack Rathbone may end up biting them in the rear.
Rathbone is still very young but he has shown offensive potential in the NHL and will be back with the team soon.
More minutes can’t hurt Rathbone at this stage of his development, so it may take some consistent losses to the NHL team before he gets his call-up.

Fresh off the first hat trick in Abbotsford Canucks history, Sheldon Dries has 10 goals and 17 points in 14 AHL games. He is an undersized left-shot centre who isn’t afraid of the dirty areas. Dries has 48 NHL games under his belt. If he continues to shine in the AHL, maybe he will become deserving of a look at the NHL.

Not anytime soon, but down the road, if the Canucks’ playoff hopes are completely eliminated, it’s a good idea to get Mikey DiPietro some games. He is likely to be the back-up to Thatcher Demko next season. Before diving into the deep end with that role, a few games of NHL action would benefit the 22-year-old.
The Vancouver Canucks can make a quick call and have a player in the city within an hour.
When they moved the AHL team to Abbotsford, this was one of the big selling points that we heard from the organization. One call can add a hungry player to a lineup that seems like they just ate a full turkey dinner on certain nights.
It’s time to use the Abbotsford Canucks as an advantage and show why moving them from Utica was a smart hockey move.
Uncategorized
Recent articles from Faber