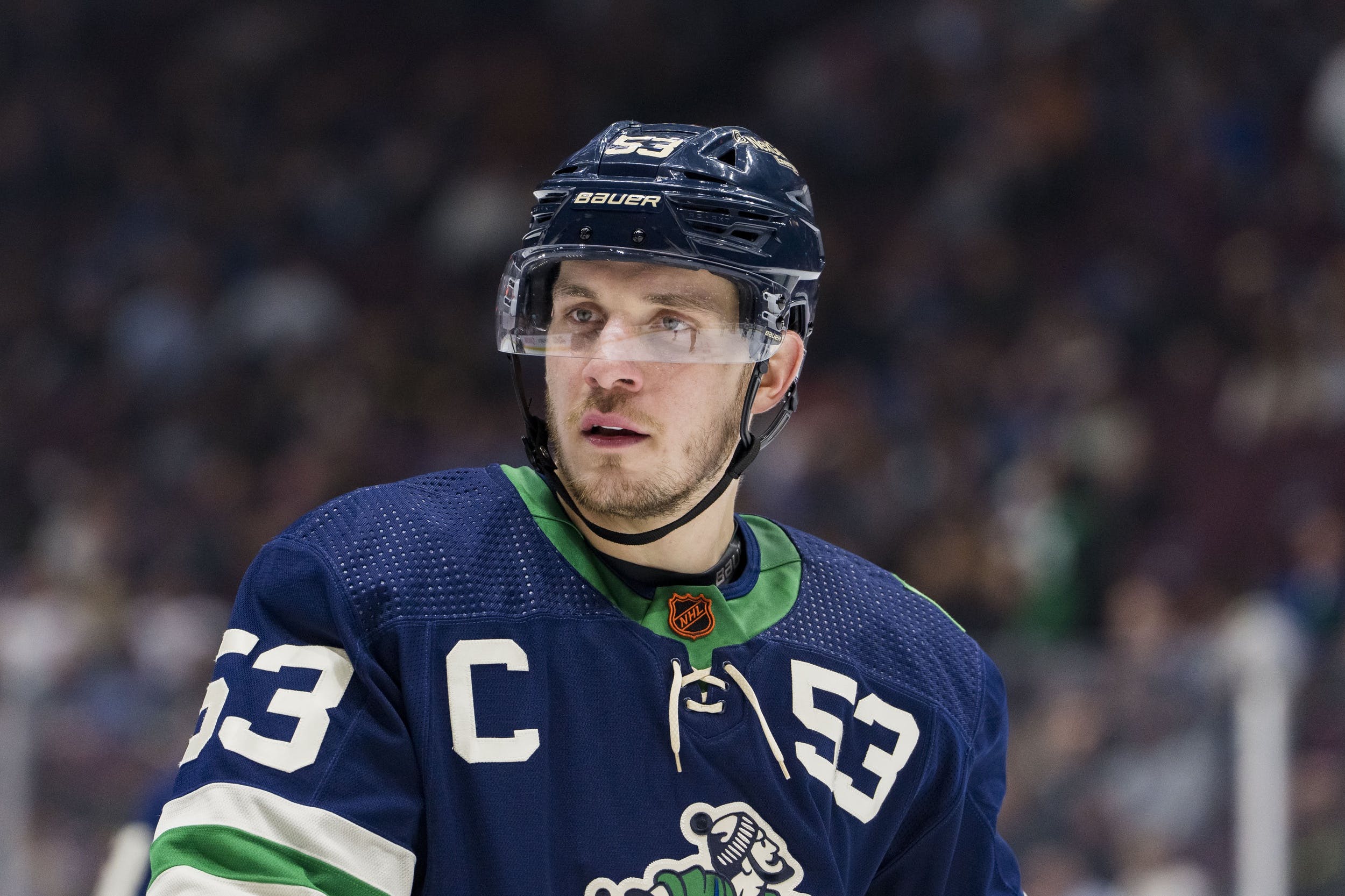 By Stephan Roget
1 month ago
Fans of the Vancouver Canucks, having watched their team come back from a 4-0 deficit to win a game 7-6 just last week, should know that it ain’t over ‘til it’s over, and that nothing is ever a done deal until the deal is actually done.
That being said, as far as conclusions go, it’s starting to seem pretty far gone in the case of captain Bo Horvat and his future with the franchise.
News broke on Monday that the Canucks had apparently made their latest and best offer to the pending UFA, and that Horvat’s camp had roundly rejected the offer — reported to be of up to eight years in length, but featuring an AAV south of $8 million.
Canucks management is now said to be committed to finding the best possible trade return for Horvat on the leaguewide market.
It all sounds pretty final, and it does sound as if Horvat’s departure from the Canucks is now inevitable. It sounds like it’s a matter of “when,” not “if,” and all anyone outside of the team’s front office can do now is wait.
But just because we’re waiting, doesn’t mean that we have to sit on our hands. We’ll be using the days to come to explore and establish the market for Horvat, starting today with the bare minimum asking price that the Canucks should set in any trade negotiations.

These past trades could give some indication as to Horvat’s near-future value.

To Los Angeles: Kevin Fiala
To Minnesota: A 2022 first round pick and Brock Faber

The last truly high-profile forward to get dealt was probably Fiala. He is younger than Horvat and was a pending RFA at the time, but Horvat does have stronger production at the moment and does play a far more well-rounded game at a more valuable position.
That Fiala returned a first-rounder and a truly top-notch prospect, even unsigned, bodes well for the Canucks.

As Horvat is a pending UFA and will be looked at by some teams as a pure rental, it’s worthwhile to look at what the top centre rental went for at the most recent Trade Deadline. That’s Copp, who certainly doesn’t hold anywhere near the same value as Horvat, but who still managed to bring in two first round picks and a very good, if not blue-chip, prospect.
That’s a pretty strong testament that rental centres are especially sought-after at the deadline, and that they rarely come cheap, especially once a bidding war ensues.

To Arizona: Taylor Hall and Blake Speers
To New Jersey: A 2020 first round pick, a 2021 conditional third round pick, Nick Merkley, Kevin Bahl, and Nathan Schnarr

In order to find the most recent pending UFA with scoring totals like Horvat that was traded, we travel back to December of 2019 and the Hall Sweepstakes. Arizona handed out a first, a third (that could have turned into a second), and at least two valuable prospects with serious potential. Then, they spent six months trying to sign Hall before watching him walk as a UFA — to Buffalo, of all places.
It’s quite a standard to be set for “rental at or near the league lead in a stat category.”

To Columbus: Matt Duchene and Julius Bergman
To Ottawa: 2019 and 2020 conditional first round picks (only one condition met), Vitaly Abramov, and Jonathan Davidsson

To find a centre anywhere near Horvat’s profile that had been traded as a pending UFA, we have to go all the way back to the 2019 Trade Deadline and Duchene. This was the second time Duchene got dealt within the span of a year-and-a-half, and the haul seemed massive at first, even if the full conditions were ultimately not met and only one first rounder ended up part of the trade.
Still, that’s one first rounder, the potential for more, a premium prospect, and an extra, all in exchange for an entirely unsigned Duchene. After flaming out with the Blue Jackets, Duchene signed in Nashville as a UFA.

To St. Louis: Ryan O’Reilly
To Buffalo: A 2019 first round pick, a 2021 second round pick, Tage Thompson, Vladimir Sobotka, and Patrik Berglund

The past trade that has been brought up most often in regards to Horvat is the O’Reilly trade of July 2018. We’ll cover it here for that reason, although it’s not as close a comparable as some might think.
While O’Reilly and Horvat might have similar reputations, Horvat is a significantly superior offensive player, while O’Reilly beats him cleanly in defensive results. At the time of this trade, O’Reilly was two years into a seven-year extension, so their contract statuses aren’t very similar either.
In any case, O’Reilly did return a first, a second, a top-flite prospect, and two semi-useful roster players. If the Canucks dealt Horvat after offering negotiation rights around first, this precedent at least confirms that they could jack up the price.

Given the precedent above, given Horvat’s performance on the year thus far, and given the general unavailability of any comparable players, the Canucks can feel confident in setting the bare minimum asking price for Horvat at a very high starting point.
We’ll go over each of the potential pieces in detail below, but any reasonable offer should contain: a 2023 first round pick, a premium (if not blue-chip) prospect, and at least one useful, 26-or-under roster player — plus any spare change that might be required to put the value over the top.

Every comparable trade we listed above included a first round pick, and the Canucks can’t afford not to demand the same in their return for Horvat. Specifically, the Canucks need to demand a first round pick in the upcoming 2023 Entry Draft, and not later.
That’s for two reasons. One, the 2023 Draft promises to be one of the best in years, and should be loaded with high-potential prospects all the way through the first round and beyond.
Two, the Canucks prospect cupboard is already bare, and they can’t wait around that much longer for future picks to arrive. The development needs to start now.
It’s worth noting that teams can no longer make picks conditional on a player re-signing, so that option is off the table. The Canucks could accept a first rounder with some lottery protection on it, but not much. They really need whatever pick they acquire to fall somewhere within the first day of the 2023 Draft.

We won’t use the word “blue-chip” here, because every team should only have one or two of those, and they’re notoriously hard to pry free. But we’ll say “premium” to denote the kind of prospect that, if not “can’t miss,” is at the very least almost certain to make an impact in the NHL in the near future, and leave it at that.
The Canucks would obviously greatly prefer a defence prospect, and an RHD, at that. But when trading a player as important as Horvat, quality should be the overwhelming priority. With middle-of-the-pack first rounders mostly interchangeable, the potential of the prospect included in an offer for Horvat should be the deciding factor.

The Canucks will almost certainly need to take some cap back when they trade Horvat, or retain some of his remaining salary, or both. But the above comparable trades show that the Canucks can do a little bit better than a “cap dump” in this scenario, and actually ask for a useful, young-ish roster player as part of the deal.
This player shouldn’t be expected to be a game-changer, just someone that can be a part of the short- and medium-term picture. Here, the Canucks could rightly focus on a defender, specifically, and come away with someone they could get some use out of.
The Canucks could also accept a straight-up cap dump, but that would have to come with an additional sweetener.

A first, a premium prospect, and a useful roster player makes up the bare minimum asking price for Horvat, but it doesn’t necessarily represent the final cost. The price doesn’t go down from there, but it could go up. If the Canucks have to take a cap dump back, or retain salary on Horvat, the price goes up. If he continues his torrid scoring pace all the way to the Trade Deadline, the price goes up. If a preposterously high number of teams get in on the bidding (more on that later this week), then the price goes up.
Chances seem pretty good that whichever team lands Horvat will have to throw at least a little spare change, and maybe even a genuine sweetener, into the mix. Depending on the circumstances, this could be as high as a conditional second round pick or an additional prospect, or it could be a collection of fourths and fifths.
Either way, the bidding starts high and — if reports can be believed — the bidding starts now.
Editorials
Recent articles from Stephan Roget