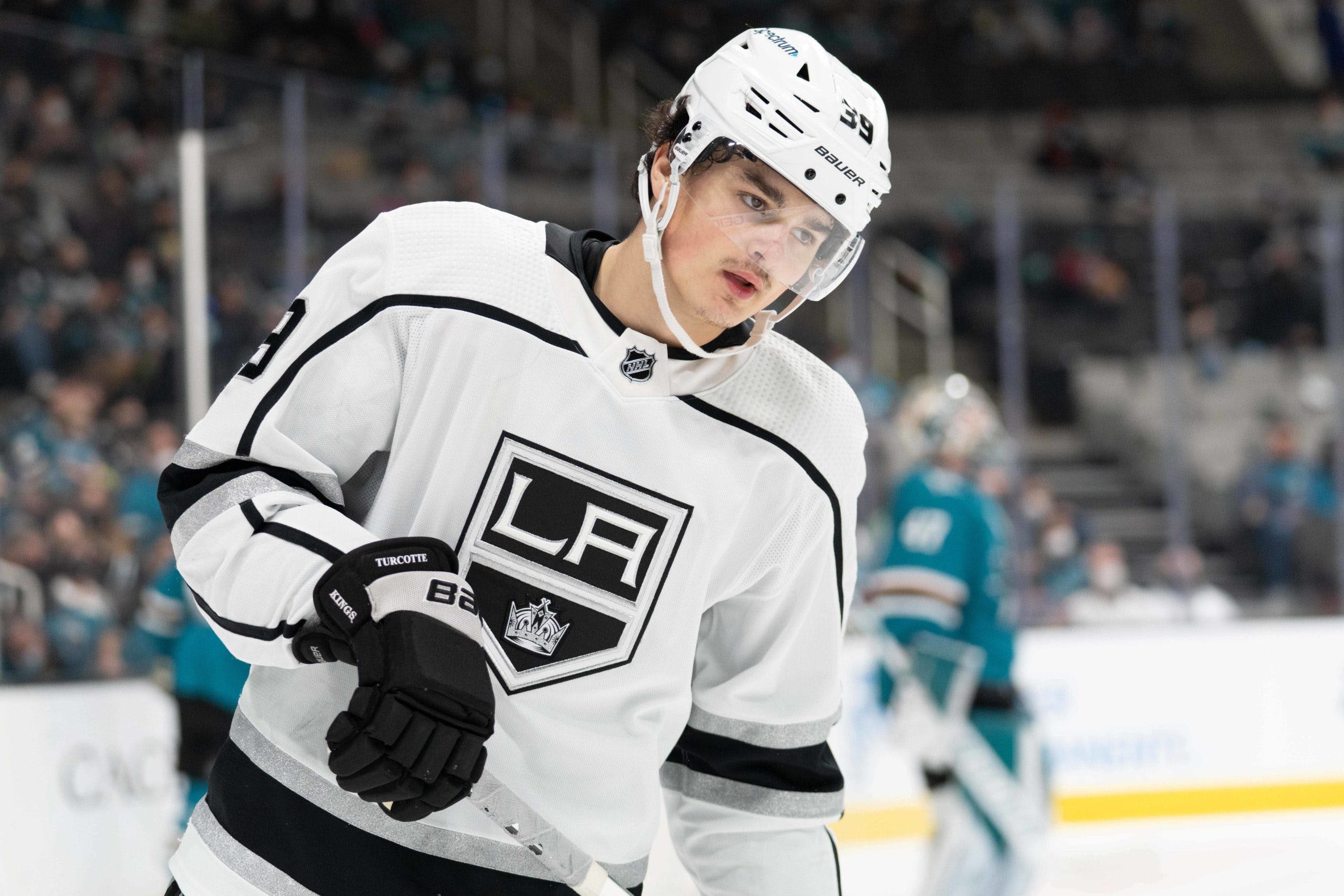 By Michael Liu
10 months ago
It’s no secret that teams have been sniffing around Canucks players. With the trade deadline rapidly approaching, names like J.T. Miller, Brock Boeser, Tanner Pearson, and Tyler Motte have been tossed around like candy in trade rumour discussions.
One of the more intriguing players that are being inquired about is Conor Garland. The shifty, diminutive winger arrived this past offseason in the trade for Oliver Ekman-Larsson and has cemented himself as a fan favourite. His name isn’t one of the ones that are usually in the mix to be moved from Vancouver, but recently the smoke has picked up around him, with the L.A. Kings reportedly making a strong push.
An in-division trade is an unappealing prospect. Anyone acquiring the spin-o-rama king is getting themselves a very good top 6 winger that competes hard every shift. Garland’s point production isn’t exactly eye-popping, but those that watch him know how effective he is on this Canucks team. Seeing him on a division rival like Los Angeles will probably hurt a lot.
With that being said, the Kings have amassed a wealth of prospects that are tucked away marinating. Back in February, Scott Wheeler of the Athletic had them pegged as the number 2 prospect pool in the league. It’s no wonder when you take a look at the names they have in the pipeline, with offensively gifted forwards and multiple smooth-skating defenders.
Here are a couple of players that the Canucks should target as a return if they do end up trading Garland to the LA Kings.

One of the names Dhaliwal floated out in a possible trade was 2019 5th overall pick Alex Turcotte. If you’re the Canucks, you definitely try to make this work. Turcotte torched the USHL as a member of the US National U-18 team, putting together a 62 point season across exhibition and league play. With the Wisconsin Badgers as a freshman, Turcotte also impressed with 26 points in 29 games.
Thanks to the pandemic, Turcotte didn’t have an easy transition into the pro level. He signed his ELC on March 11th of 2020 and didn’t play until nearly a full year later. Making his debut with the Reign in February 2021, the forward tallied 6 goals and 15 assists in an abbreviated AHL season.
This year Turcotte hasn’t exactly lit it up, with 6 goals and 12 assists through 26 games. His talent and instincts however are undeniable. He’s never out of position and can do a bit of everything. Turcotte is a 200 foot player with speed and hockey IQ to match, along with a knack for being in the right places to put pucks in the net.
It’s also worth noting that the Ontario Reign is a stacked AHL team. The Pacific Division is quite frankly a two-horse between them and the Stockton Heat, with the Reign sporting quite a few veteran AHL pieces that push Turcotte slightly down the lineup. He’s been out with an injury recently as well, which has contributed to the lower point totals. Still only 21 years old, there’s plenty of potential for Turcotte, and it’s something that Canucks should consider when looking at the fit for the contention window.

Faber is a stud. The second-round pick in 2020 has been one of the best defensive prospects around and plays in a premium position. Posting 9 points in 19 games in his final year with the US National U-18 team, Faber has gone on to play for the University of Minnesota Gophers these past two seasons. Currently, his team is vying for a spot in the NCAA Frozen Four after a disappointing second-round upset loss to Minnesota State last year.
Where this defenceman excels is in his own end. Faber has great defensive awareness with an active stick to match. He isn’t afraid of battling it out on the boards and is also very quick to turn defence into offence. The patience of his transition game is something the Canucks could definitely use, with crisp breakout passes and excellent vision.
And it isn’t like Faber isn’t capable of some offence himself. Though his point totals might not jump off of the page, he has a good shot and can get it through traffic. Faber’s smooth skating allows him to walk the line with ease and with time he’ll be able to piece together more point production.
Currently only 19 years old, Faber is trending in the right direction. The Canucks could use a young RHD like him who’s quite close to making the jump to the NHL. A little bit more offence and he could lock down a top 4 spot for a long time in Vancouver.

This is a player that could fit very nicely into Vancouver’s top 6 soon enough. Samuel Fagemo is another second-round pick of the Kings, drafted back in 2019. Fagemo went on to post 22 points in 42 games with Frolunda HC of the SHL in his draft+1 year, before jumping to the AHL the next year.
He didn’t miss a beat there either. Fagemo put up 18 points his first season before really finding his groove this year. The winger currently sits with 20 goals and 12 assists in 47 games and has also made four appearances with the Kings.
There’s a lot to like about Fagemo’s game. He is a bonafide scorer, a good skater with soft hands and some underrated playmaking. What he’s most known for is a powerful shot. Fagemo has a wicked release on his wrister along with a powerful one-timed blast.
He’s still developing on the defensive end, getting lost a couple of times and missing his assignments when he first came into the AHL. However, Fagemo has been improving on that end steadily as well, currently sitting with a +20 on the season. Though +/- never tells the entire story, it’s an encouraging sign when compared to his -1 his rookie year, along with the work ethic he shows day in day out.
The 22-year-old is someone the Canucks should seriously consider in a return from the Kings. His offensive abilities project him to be a top 6 contributor and there’s a lot to suggest that Fagemo still has room to improve. Another bonus? This guy was Nils Höglander’s linemate during the 2020 World Juniors.

Durzi is a gifted offensive defenceman that’s been holding his own at the NHL level. After going undrafted in 2017, Durzi’s 49 points in 40 games with the Owen Sound attack worked into a 2018 second-round selection of the Toronto Maple Leafs, who dealt him to the Kings in the Jake Muzzin trade.
After one more year split between the Attack and Guelph Storm, Durzi made the leap to the AHL with Ontario. His first season with the Reign showed his offensive promise — 14 points in 39 games is a very solid rookie year. By the same token, Durzi’s defensive game was not yet ready, exposed frequently on the back end.
By the next season that had changed. Durzi made huge strides to become a much more complete defenceman, putting up 20 points in the same number of games and leaping from -7 to +1 in his +/-. This season Durzi took a leading role on the Reign blueline, scoring 16 points in 13 games while being +13. With injuries plaguing LA, Durzi got his call up to the NHL and hasn’t looked back.
He’s solidified a role in the Kings’ top 4 with 19 points through his first 45 games in the NHL. While the defensive concerns are still there, it’s much more of Durzi getting himself accustomed to the pace of the big leagues as opposed to defensive IQ. For the 23-year-old, it’s something that he’s been improving with each passing game. This, coupled with his puck-moving ability, makes Durzi an excellent fit on any team’s defensive core.
These are just a couple of the names that the Canucks should look at in a potential trade with the Kings. This is barely scratching the surface of some players they have and management should be looking to make the most of a very stacked pipeline when in trade talks.
Uncategorized
Recent articles from Michael Liu